All the May Stuff

Well May has nearly wrapped up with all its crazy and glory - and we weren't even playing soccer which undoubtably would have added to it - thanks for trying to mask up outside... 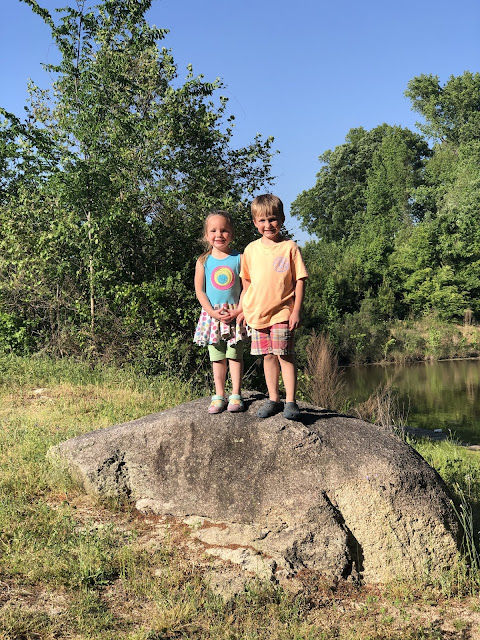 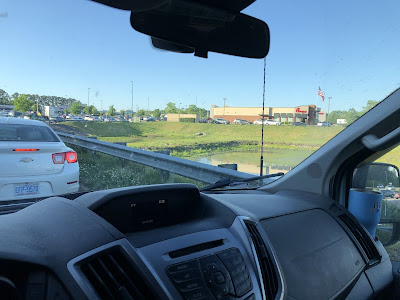 And was followed by an unusually long wait at CFA. We were here at 6:34 and pulled away with food at 7:11. 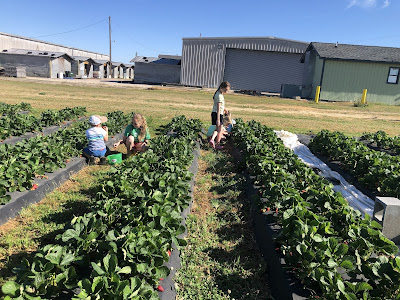 We kicked off May with a trip to pick strawberries 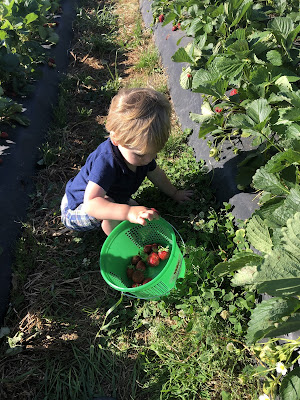 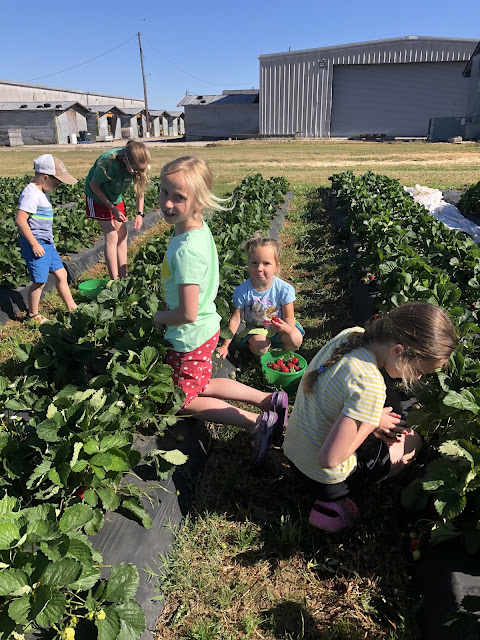 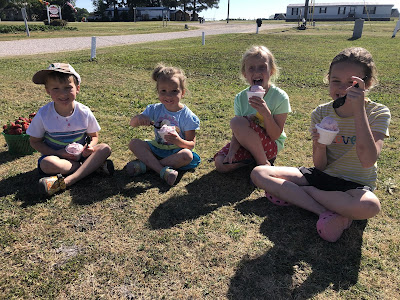 I did have a little sticker shock when we picked 3 buckets at $16/bucket and I tried to remember what it was last year and then I remembered its all about the experience, right? 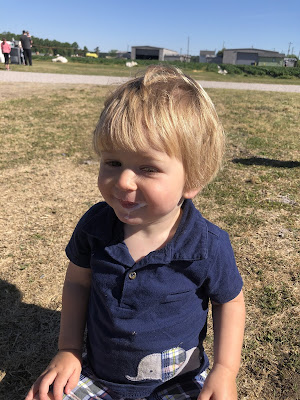 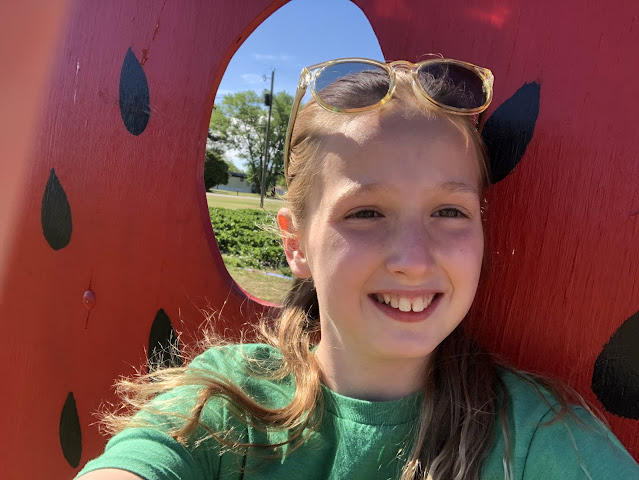 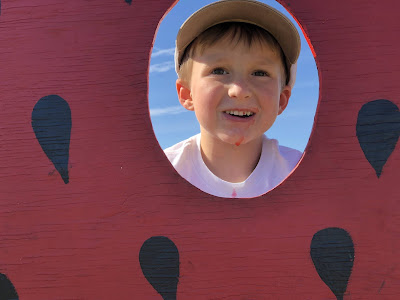 We went back 2 weeks later for strawberries and they weren't nearly as big and plentiful as the first trip so I'm glad we went when we did
A little reno update... 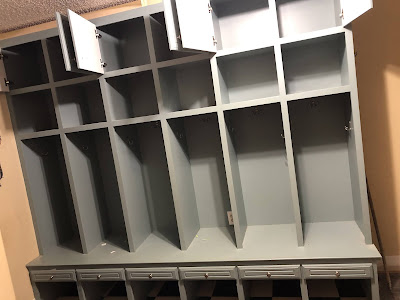 We had to empty out the cubbies so the new floors could get installed. I knew it was coming but still pained me to have to unload them. I know I'm not the most organized or neatest person in the world and I'm good with that but at least in my mind there is a plan 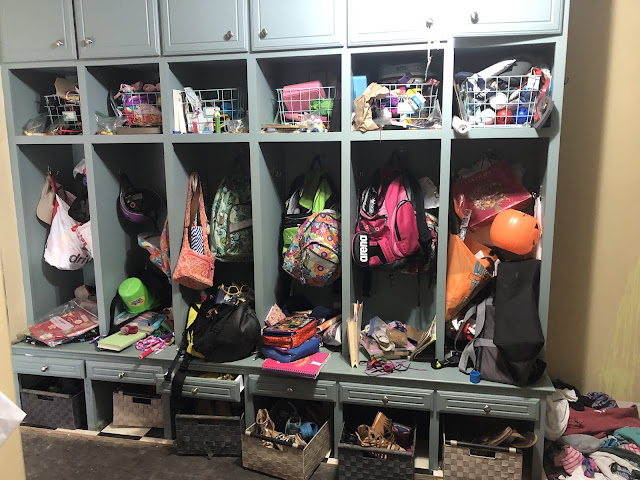 Everyone has a cubby to throw (but could be hung) their stuff and there is a spot for collectables (drawers), shoes (bins unders), loose stuff (bins over) and storage for art supplies and other craftish things we don't always want to see but need access to (high doors).
The cubbies were something a designer and I drew up 5+ years ago and I really appreciate them for the in-theory organization they provide. Well let's rip organization out during the craziest month of the year! For an indefinite amount of time. So we organized out of laundry baskets and shoes strewn across the garage 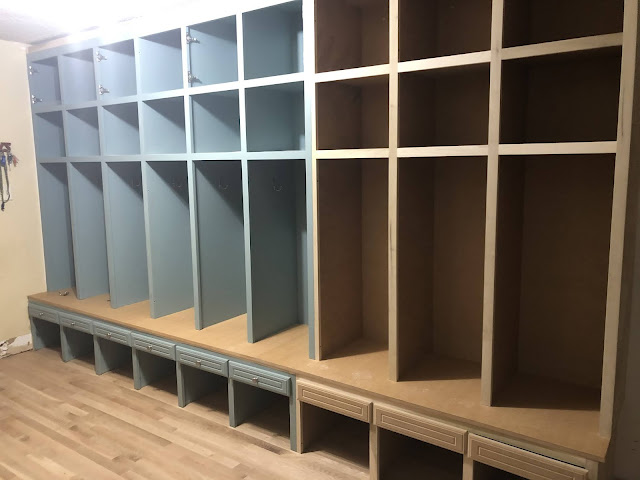 Until one Friday I walked in and my cubbies were back - plus three! And while we still have not totally loaded them down because there is still painting and sanding and staining to do - they are back and give some sense of order in this crazy crazy month we live thru 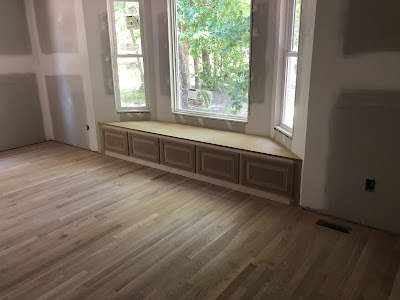 This is the big kid study /reading room. Everything seems to be coming along nicely. The tile was put in the bathroom and laundry room this week and I'm still wondering how laundry will be happening since the washer and dryer are staged in Lee's office at the present moment. 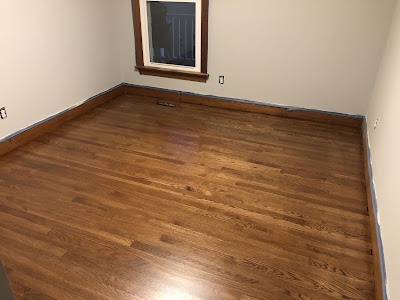 We put hardwood in the nursery which meant J got kicked out for 3 weeks and he had a ROUGH time living in the pack and play in our room. We opted to transition him to the kid room downstairs with A and C and put a mattress down for M in the nursery. It's been a loud and wild bedtime for a week with 3 under 5 in one room. M is enjoying her solitude. 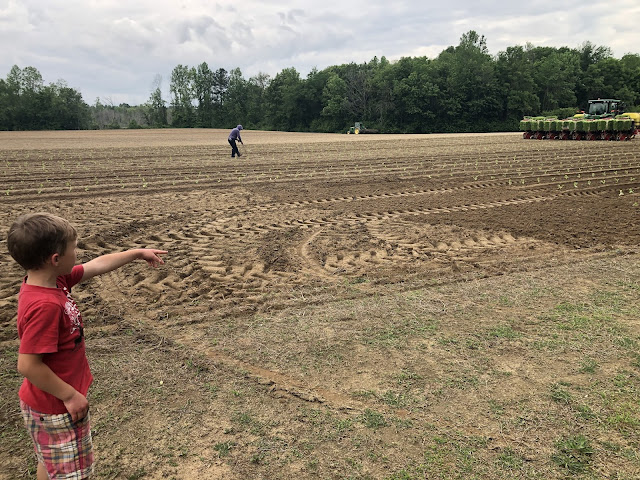 They planted the field at the end of the street which is always big excitement - especially for A and J - who loves a truck, tractor or bussssssss. 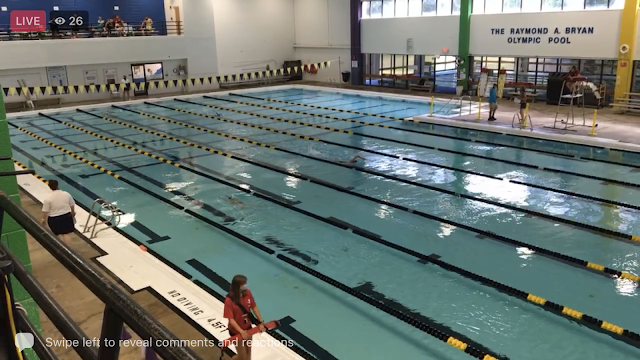 The girls swam in a long course meet not too far away. The difference is it is a 50 meter lap instead of a 25 yard. I watched on the video feed Friday night and could have died for the girls. Apparently M was legit shaking before she swam the 200 IM - a lap of each stroke. 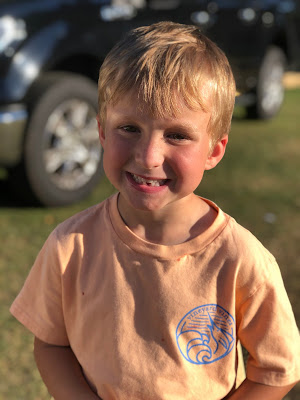 This guy lost a tooth and the next day lost another. I hate when preschoolers start losing teeth - I feel like it is the first signs of turning into a bigger little kid 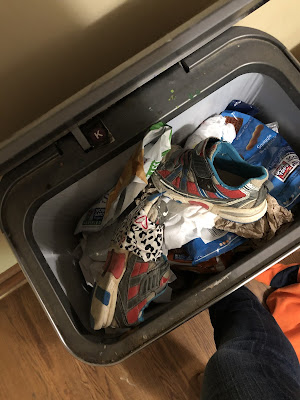 He also tore through his school shoes a week before school got out. The girls never have done that. So he wore tapped shoes for a day and then we trashed them and found an old pair that he hasn't completely destroyed. So much for hand me downs. 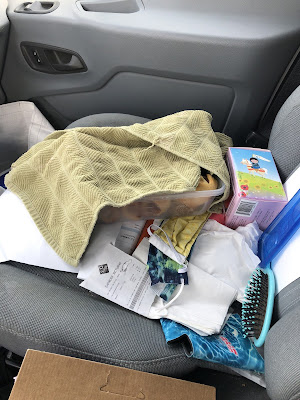 All the end of year stuff happened which meant more than a few meals in the car - which means finding crumbs for days and getting the blower and blowing the van out every week or so to unearth things that are left behind. 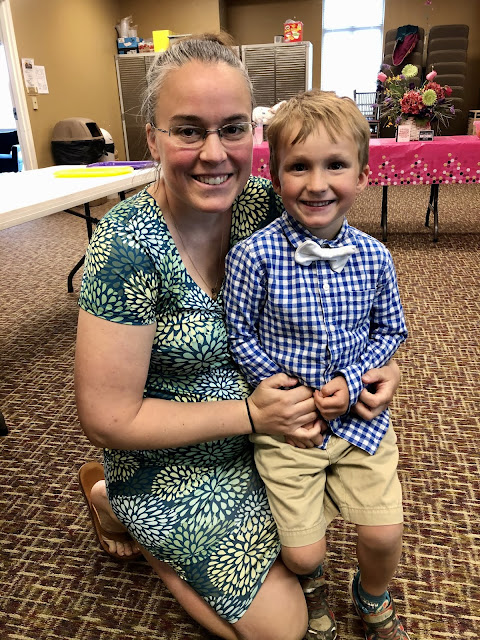 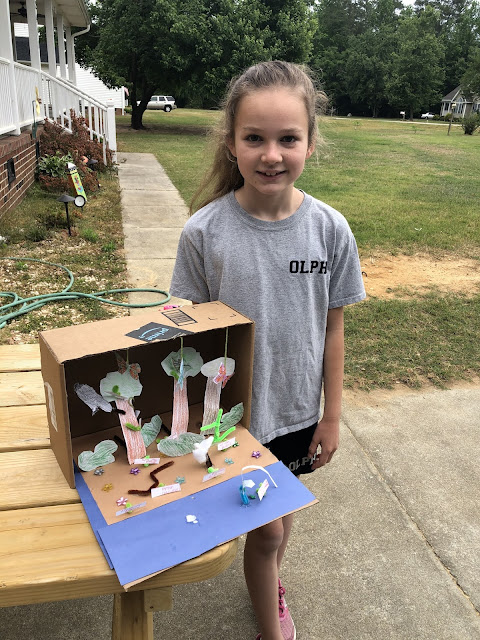 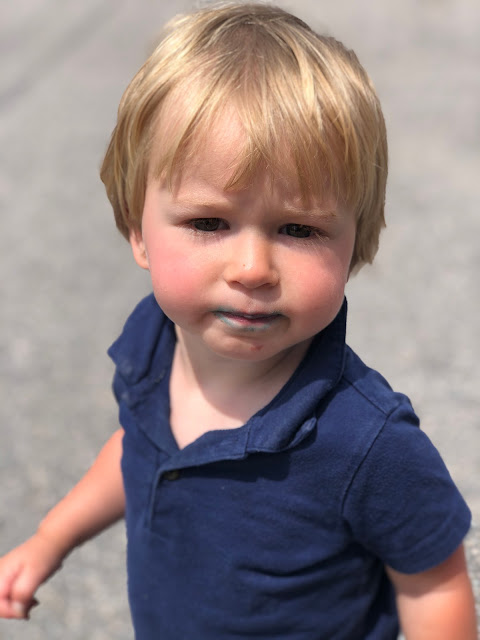 Slushy party at school for a fundraiser I help organize - the day AFTER the glucose test that I failed so J and I shared. Sidenote, I walk 15-18 miles a week so I'm pretty confident I don't have gestational diabetes. 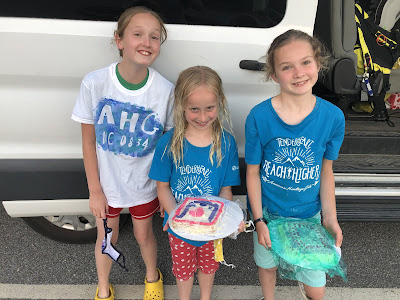 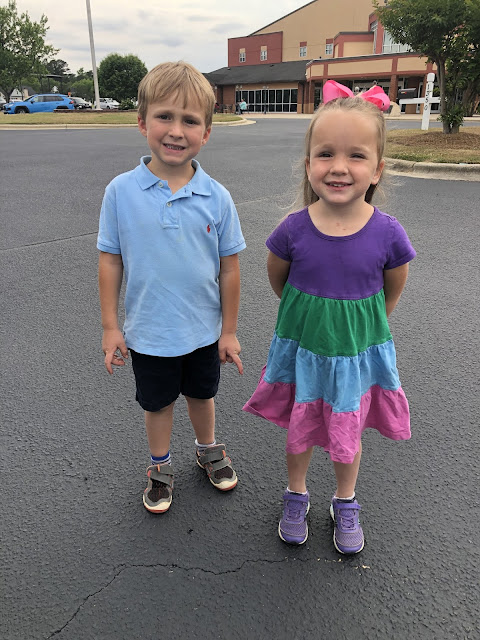 End of year preschool program - A totally rocked it out and was on stage and didn't lose it like he did at the Christmas program 18 months prior. C was totally into the spotlight and two weeks later is still giving microphone commands to everyone who had speaking parts. 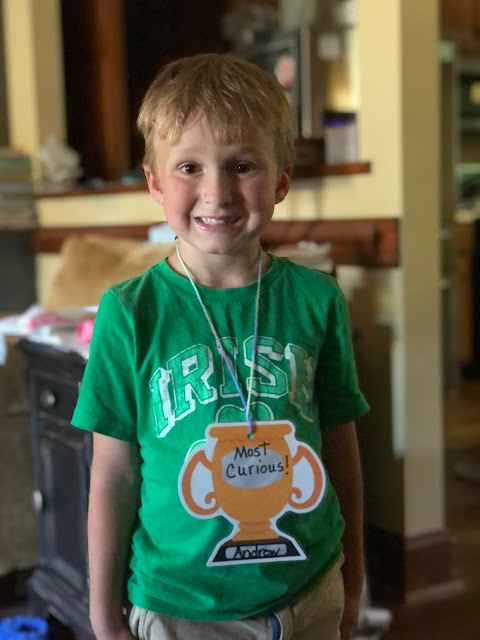 I went to As preK party the last day of school which I have not been to for the big girls but since there were so few parties parents could go to I went and I'm glad I did. Mr Curious. 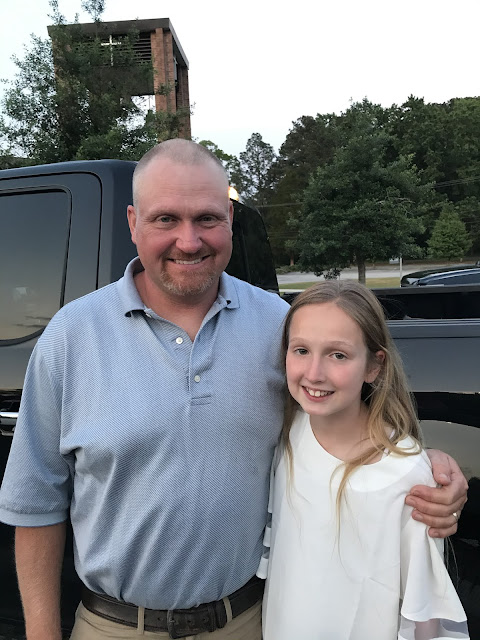 End of year choir program that came together in only two months of singing in person. Lee went and I stayed with everyone else because there was some questionable cold/cough/allergies around the house 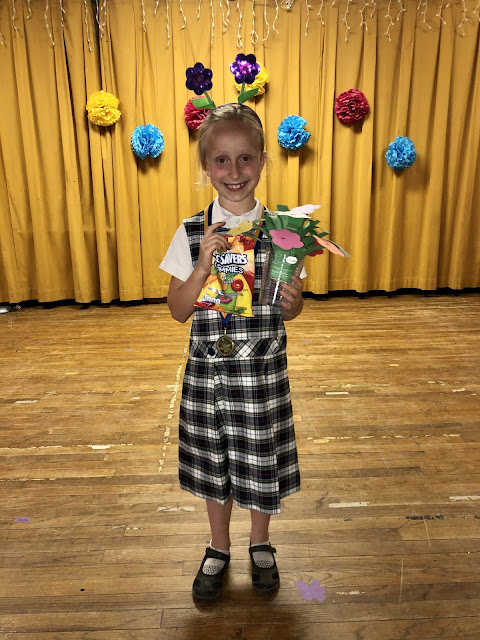 M had her end of year 1st grade celebration and was given the Lifesaver award. She got the most AR points and stamps for never getting her bee moved - but I'm halfway convinced she just never got caught. 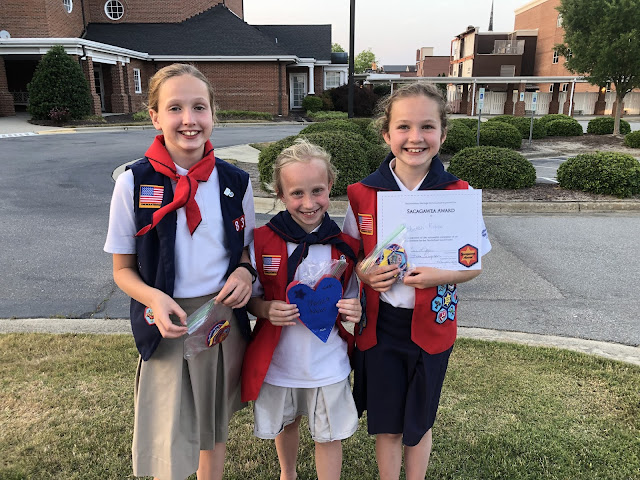 End of year AHG awards. The girls earned a bunch of badges and did a little on their own so they were pleased with themselves. R is moving up to Explorer next year so she's excited for that. 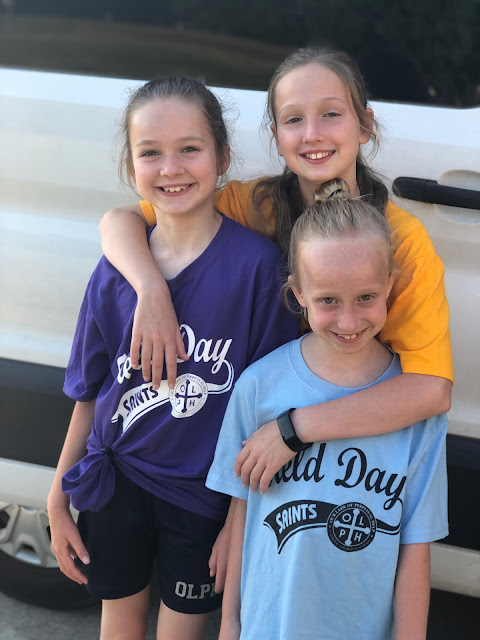 Yesterday was Field Day. Probably the best school day ever. There was lots of sugar, water, fun, sun and stories to tell.
at May 29, 2021 No comments: