This post is part of the Keep Christ in Christmas Blog Link-Up
hosted by the Catholic Bloggers Network!

Now that Eastern Catholics are nearly halfway through Advent (aka the Philip's Fast - which started 11/15), it is time to update how our family is doing celebrating Advent.

Advent is about preparing our hearts, minds, homes for the birth of Christ.

It is the getting ready period. The world did not rejoice before the Nativity of the Son of God; it rejoiced when it happened which is why we won't light our tree until December 25. The world was in darkness before the Son of God came so our house will remain dark and we will celebrate on the feast and in the days and weeks after (as opposed to the days and weeks before : )


The plan was this:

Week One - Operation Christmas Child - which was a success for our 3.5 yr old and 22 month old.


Week Two - Pray at a Graveyard - this got switched for another week because Papa picked up this bag at the Roman Catholic parish in the Mount... 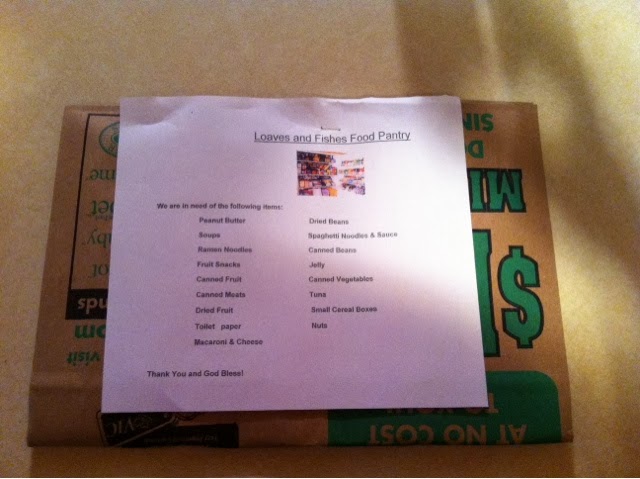 He and the girls went shopping last week while I was at work and after repeatedly reminding him I needed pictures for the blog... He forgot. : ) He and E still have to drop the food off at church so maybe I'll see some pictures from that

Week Three (this week) - We are collecting things for St. Nicholas to take (toys/clothes/books) so he can bring those to other people who need them (aka CPO or somewhere like that) and bring us new things. He's coming to our house Thursday night and E is super excited... Mostly about the candy. I'll do a post dedicated to St. Nicholas after he comes

Week Four/Five/Six - We have a few options and idea left. Pray outside an abortion clinic, Pray at a graveyard, Get an ornament (or two) off the tree at the church there in the Mount, Go shopping and drop off food items at the InterFaith Food Shuttle

Our singing of O Come Emmanuel in the morning after our prayer time is going well. E is more interested in holding the paper the music is on but she was singing parts of it at church yesterday.

It is definitely a work in progress fine tuning the best way to explain Advent to young ones for sure. I think we are getting somewhere though because E keeps asking:

"Why do those people have their Christmas trees up because it is Advent time..."

Here's some other blogs about Keeping Christ in Christmas... Enjoy!