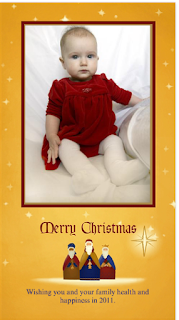 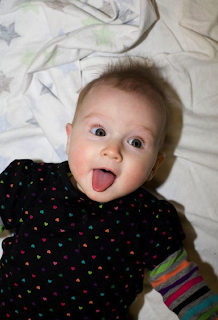 It is quite hard to believe that Christmas is almost here again. I am been super bad about updating the blog so maybe 2011 resolution will be to keep up with it. I have never been one to keep New Year's resolutions, so here's to 2011.

So the Lo Down from the past several weeks.

1. Probably our families most exciting news is that our very own Papi was ordained to the Sub-diaconate last week (12/19). A sub-deacon assists the priests and deacons during Liturgy (or Mass for all your Latin folks - we love you too, we just prefer the Greek form of the word). Lee will have more responsibilities around our little mission church. But even more exciting is that this puts him on the path to ordination to the diaconate some time next year - God willing. E and I skipped out on the 10-hours drive there and back so I have not seen any pics yet but they are coming.

2. Speaking of pics! The infamous pumpkin pic is here. 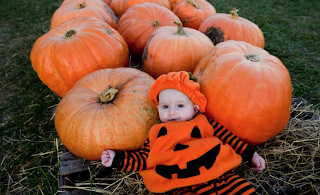 I already have big plans for a Christmas pic but its not Christmas quite yet so I will leave you in anticipation.

3. Speaking of all things Christmas. We did Christmas cards this year! The beebster was of course the pic on the card. Lee and I debating about when to send them out because we did not want them going out too early and if we waiting until the Christmas season (12/25 to 1/6-ish) most people have already taken the Christmas out of their homes so we mailed them about a week before Christmas. Last year we kept our tree up until Lent started! If you did not get one that means I don't have your address.

4. Other important news from the Mount. While Lee was in Ohio for his ordination, E and I were responsible for tree shopping. It is now a three year tradition to get a tree the last Sunday before Christmas at the NC Farmer's Market. Usually you can get a steal and this year was no different. I got a 13-14ft tree for $40! I think I could have gotten a better deal if Lee was there but whatever. My little brother --- well let's see, my younger brother who is taller than I got a cute little tree too and so did my parents! It was quite an adventure. E did not really care - she was just cold. When I got home one of my brother-in-laws and nephews came over and got the tree off the car, got it in the stand, in the house and straight the first time around! It was quite impressive! So many thanks to them. Normally Lee probably would have vetoed this tree because it is so so big but I think he likes it more because he did not have to get it in the house. Pics of that will come.

5. Okay so this is what everyone really wants. Bibita news!

a. We went the doctor not too long ago - 15 lbs is the latest! E was a superchamp getting her shots. She did not even cry until the second and third ones.

b. E's teethies are getting bigger - and sharper for that matter. I have been chomped down upon multiple times. She also is rolling over like a mad-woman. She can get across the room in a couple rolls and is pretty darn proud of it.

c. E has stayed at Grammy and Grandpa Joe's as well as Jibbe's all by herself for a night. No problems just follow the night-nights routine and she is golden - I say that now, hopefully it should continue. It is weird leaving her and knowing that we won't see her for at least 12 hours. I try not to worry but I do. When Lee and I get back she does not seem to fazed by our arrival - which is kinda a bummer. Well she is getting good practice.

d. E has hung out with her little Lamaze boyfriend B. B is three says younger than E and it is so nice to catch up with another mom while the bibis drool and looks at each other! He are some pics. 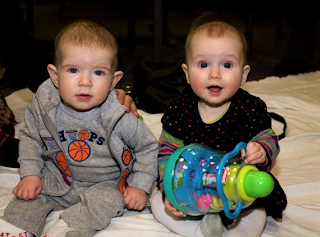 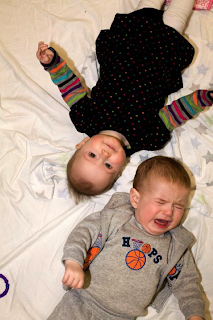 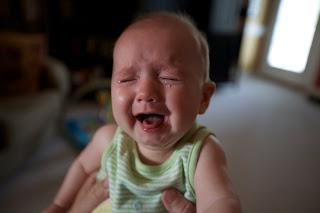 Okay soooo sad that I have not posted anything recently so let's hit the highlights.

1. The Bibita and I survived our week with the Papi. Lee went out to CA to visit a friend and do more work for his deacon class. Side note, he will get ordained/installed a subdeacon 12.19.10 which is very exciting! Anyways, I did a detailed cleaning of the house and E was a super sport. She was thrilled to see her Papi come home.

2. New foods. E has been really into food. Fruits, veggies, a slight bit of ham and turkey, and rice cereal. Now rice cereal is quite bland and I think E got a clue and decided the same thing... so she started screaming at it. Last night I thought she would like it jazzed up a bit. Lee was making chili so I skimmed off a few spoonfuls and mixed it with the rice cereal. I tried it did not seem too spicy and E ate it down. Well what goes down might come back up and it certainly did around 11 pm right when Lee and I were getting ready for bed. E was not upset about this first sickly experience but she was super pitiful. Lee noted that this would certainly not be the last time we were changing sheets at midnight. So lesson learned, no chili for a while.

3. Turkey day. Thanksgiving was a blast and was quite action packed. Lee was helping prepare food Wednesday so E had the day off from work and hung out with her Papi and cooked. Thursday we headed to the Pines for Thanksgiving with my family. My twin uncles were there which always makes everything twice as fun! Great to catch up with aunts/uncles/cousins/friends. Then drove back to the Mount that night for the second day of Thanksgiving with Lee's family. E has 5 cousins on this side of the fam so she was showing off her rolling over skills and was having lots of cousin time. Overall rating... good food, good times, cannot wait until next year. Well we pretty much do the same thing over again for Christmas.

Speaking of Christmas, Lee and I hit up Target and got ourselves some stockings. The Bibita got a bity stocking - it is super cute. I am actually working on cross-stitching her a stocking but that won't be ready this year. How about all those Christmas decorations? We won't get our tree until the Sunday before Christmas and it will not get trimmed/dressed (maybe I am confusing these words with Thanksgiving turkeys) until Christmas Eve. Advent people, Advent!!! We are also super excited about St. Nicholas coming to our house next Sunday night. His feast day is 12.6 so we will leave our shoes out and see what he has in store. Next year will be so much more fun because E will actually have a clue what is going on, but Lee and I are excited about it.

4. Teeth! So it appears E is teething her first toothy!!! Kinda makes me sad because I think that once babies start to have teeth they are officially toddlers! Not ready for a toddler but the Bibita is getting so big! We have our 6 month appt tomorrow....
at December 02, 2010 1 comment: