Linking up with Kelly ...

Tuesday - E and I swim in the AM. The evening holds AHG for E (R is pretty much done as of last week)... awesome except Lee and I literally cross paths in the driveway as I am taking her because... 'tis the pool season and aint nobody trying to load up 4 other kids who are at or nearly at bedtime just for the heck of it 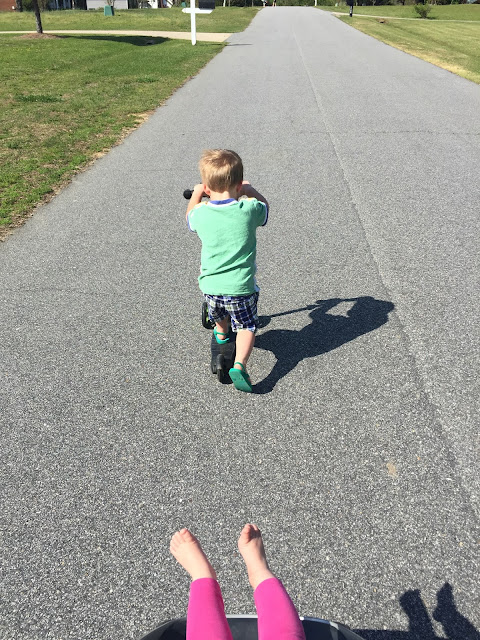 A is quite the scooter-er.... We went up the road to visit our neighbors which is something I appreciate and remember doing when it was ONLY E and R. That's crazy. I love afternoons like this and so do the kids.

Thursday is where it started to get hairy.... 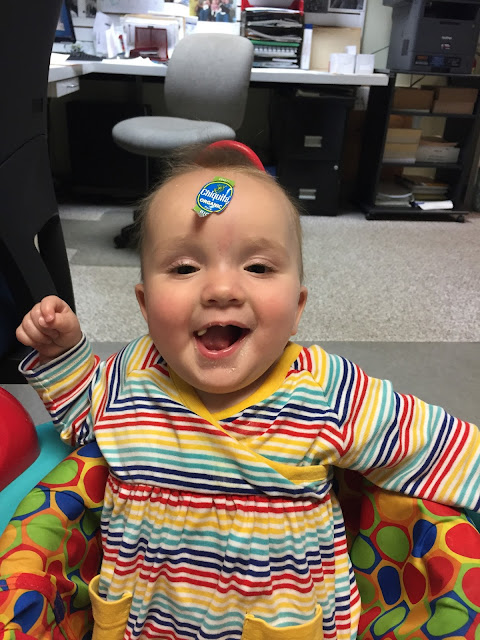 This is C as I am feeding her a .... you guess the fruit?... Then about 2.5 minutes later that fruit and all the milk she had after her rest came hurling out of her tummy about 20 minutes before picking up the big girls from school....

She didn't seem terribly bothered but little people throwing up is a bit nerve racking.

Pick big girls up from school. Deposit them at Jibbe's. C and I head home. We go on a walk because I don't know what else to do with her as I wait for an encore performance. Jibbe feeds everyone and drops dinner off and takes R to tee ball practice (I have the BEST mother in law EVER). Lee gets home from work. I put everyone in bed. I go to R's tee ball game which is pretty much taking place in Arendelle. Get home. Go to bed...

Backing up to earlier in the week at some point... M's eye started crudding up a bit but the pollen is RAGING in between the 80s and the frozen temps about here BUT

She woke me up at 11:45 on Thursday night because her eye was crusted over...

SWEEEEEEEEEEEEEEET pink eye. Did I mention I'm sleeping in C's room because A. I'm worried up her throwing up again (suspense killer... she doesn't totally isolated incident) and B. I'm feeling a bit under the weather and Lee has a super big Friday and we don't want to get him sick.

Lee leaves at 5:55 to set a fiberglass pool! 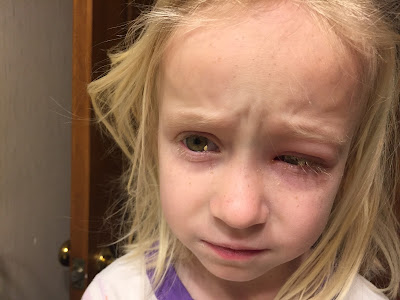 This is how she wakes up... This is her after getting cleaned up before breakfast.

The masses wake up. R announces her tummy hurts and I realize my day is going to pot so I tell her to go back to bed and E hustles to get the heck out of dodge!

So it is not off to work I go and after dropping E off I call the pediatrician and I'll get a call back. I run by the office and pick up some things to do at home with my resident sickies and head home. As I pull in the driveway I get a call back from the nurse (hoping for a Rx and I'll jet right out and get it because pink eye is pink eye, right?).

Me - Well you see... C was throwing up yesterday and R says her tummy hurts and I have A with me so can I just get a prescription so I don't have to bring sick kids with me?

Nurse - Since Ms eye was swollen she has to be seen. Morning, afternoon or tomorrow...

Me - SIGH... (thinking tomorrow is too late and it might spread to someone else, afternoon... I don't know how E is getting home from school) morning and if something changes I'll just call you 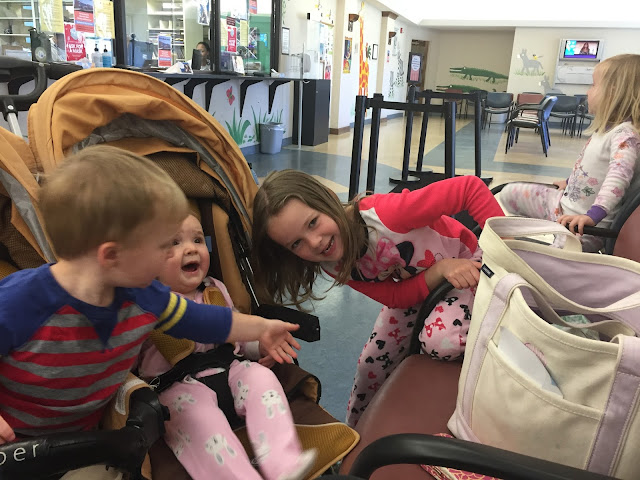 My Walking Dead... R kept on asking what The Walking Dead were and why were there dead people walking around. 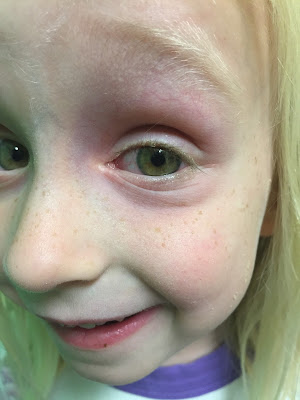 We survived the appointment... barely. And headed off the the closest pharmacy with the pick up window because.... getting 4 kids out of the van for a tiny bottle of medicine... Not cool

Except I get to the window and they say  - Oh that just came through it will be 30-60 minutes.

Get gas because I've been on E^mpty for too long. Head home without said tiny bottle of medicine and devise a plan to secure the medicine and E. All the while texting another mom friend of five because we have solidarity texts pretty much all the time. She offers to pick up AND deliver said medicine - because I got the best of friends.

We chat.... I need mom chat more than ever

Everyone loads up to get E and then we are home.

I touch base with Lee for time numero DOS for the day. Looks like I'm in for the long haul.

E desperately wants to go to soccer (and she didn't go last night and so I take one for the team) so our best of neighbors helps facilitate that and all I have to do is pick up.

I load up the troops for one last run of the day. 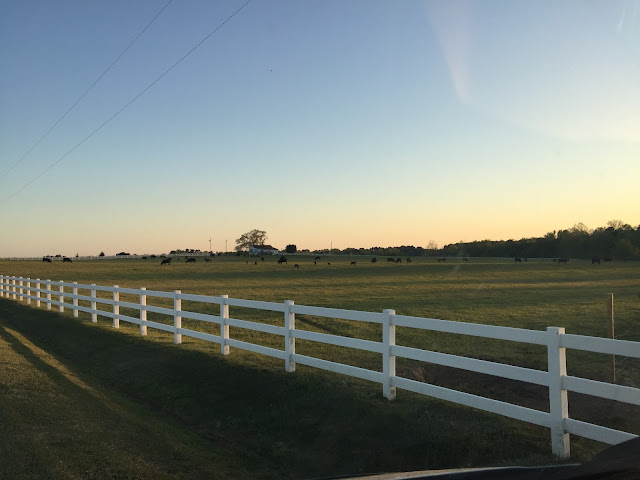 We grab E and take the long way home at the little kids request. I let everyone get out and see the cows. E said she "only got out to support A" - drama

Everyone goes to bed.

R never threw up and as much as she said how bored she was and how her tummy was better - maybe she just needed the day off. So whatever the day was shot (from a me trying to work more than 15 minutes at a time - stand point from the get go)

Lee rolls in sometime at or close to dark.

He gets a showers and gets dinner...

I know how his day has shaken out with a late truck and missing parts so my turn!

Me - You know that R didn't go to school today right...

Me - All four little ones.

Saturday was so uplifting and full of promise: 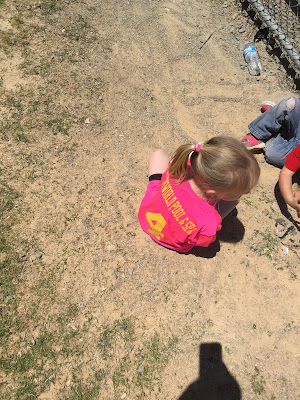 It was picture day at soccer which always makes things way more interesting than necessary.

Lee stayed at home while E and M and me went to M's game. It was a great game and M scored a handful of goals.

We headed home with the van still on E^mpty from last night and then 20 minutes later after a quick regroup E and me head up for her game - with Papa and the gang following at game time. E's game wasn't nearly as fun as last week. You know what, it is kind of really fun to win. And you know what? It is really hard to coach your kid because they act differently for you....

I might be throwing in the towel on coaching a team of E's in the future because she is a whiner for me but I enjoy coaching but I think it will be better for her in the long run. We had multiple discussions about it so I'm sad for me but believe in her and want the best for her. 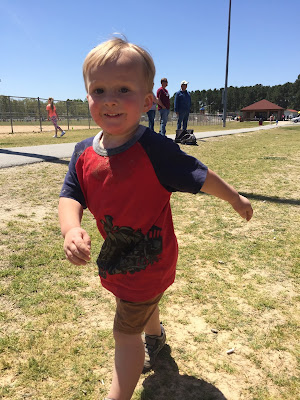 Then we shoot over to R's tee ball game without Papa who had to leave for work..... at noon.

A and M played in the dirt. E was the batgirl again.

R had some good hits and did some nice base running.

Then (no photographic evidence)

We survived. I wished I had space on my phone for a pic.

We decided to go out for M's celebratory goals from LAST season BEFORE dinner.

We pick up pizza

We go to bed

We decide to go out to family breakfast at a nice restaurant after church but they don't take reservations so we are just going to rolls with it.

About 9 something A has a nightmarish fit. He is not awake but I take him out of his crib (to not wake up M) and he is literally kicking and screaming and rolling on the floor for a few minutes - it is the weirdest thing

11 something M comes in and says her eye is crusted up again - NOT nearly as bad - get her cleaned up.

3 something E comes down and says her tummy hurts. I'm on the couch so I tell her to get on the other one because I'm on the big one. I've half convinced it is because what she ate yesterday. Well she gets sick... a few times.

Did I mention I am not a 'good sick mom'? Because I'm not and I know it. I think God knows this and He's working on me. Can't you tell?

Then M wake up and Lee and I do a quick and thorough Lysoling of the downstairs. R emerges and says she is going to throw up. So the upstairs is the new sick bay and I've got a gate between my sickies and non-sickies - and I'd like to keep it that way.

R does in fact get sick - so maybe she was sick Friday? Who knows...

Our neighbor brings us some keifer and we all cross our fingers this will work while Papa is at church.

I listen/watch Mass on EWTN because... what else should you do in between dumping Legos downstairs and cleaning toilets upstairs? It was the Sunday of the Good Shepherd and the priest noted that we need to know our Shepherd like He knows us - do we know what He wants from us? and that there are people now who know more about fake news than the Good News. Sad but so very true.

So it looks as if my Monday is shot even though E and R have been okay since mid-morning. They will be taking it easy tomorrow for school even though they'll be bouncing off the walls.