Linking up with Kelly ... there's been a mountain of happenings this week!

The tail end of this week swirled with amillion and a half baby comments.

When the next one...

What if you keep on having babies...

How many carseats can you fit in your van?...

Well its about time for the next one, right?

Are pregnant? You/re not pregnant, right?

I kinda cannot handle it. Do I look pregnant? I mean i know we have five kids but gracious. There is not another baby to speak of at this point in time... but on God's time maybe we just might have another one or two or three or I don't know. I just cannot think about it because life is crazy^loca. We will loving and graciously welcome and be blessed by any future Kibbe babies. But for now let's not talk about BC or TT or Vs because we don't do that. And let's not be surprised in 3 or 6 or 9 or 12 months that there is another Kibbe baby because let's face it babies are A-mazing and they seem to be in the cards these days. My mom and mother-in-law totally pegged me for it when I was pregnant with C so if you are DYING to know when I'm pregnant then ask them.... because you know how we keep things under wraps until 14ish weeks.

But if I cannot come up with a quick and witty follow up to baby innuendos... well whatever 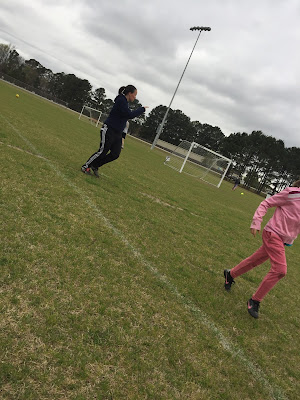 M took about a zillion videos after her practice this week. All of them lasted about 1 seconds so whatever. The weather has been bizarrely chilly so Papa was home to man 3 of 5 so it was M and E and me for the long haul. 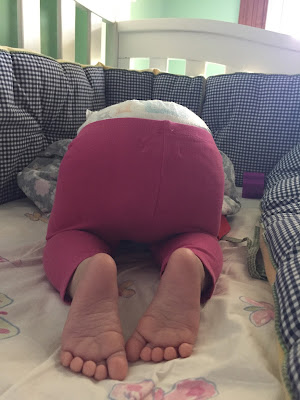 C started MMO this week. She's doing great and I'm getting the hang of this whole having to drop a kid off at daycare thing - like with names on bottles and snacks and stuff - the kids preschool converted from half day into half day and full day about 2 years ago so the state regulates the rooms and there just a lot more paperwork but still the same great atmosphere... It is taking some getting used to but C is actually in a class of kids all less than 12 months and I half expect her to crawl up to me one day when I pick her up.... but for now no. She's also got one nice shiny tooth in the bottom of there little bitty mouth. 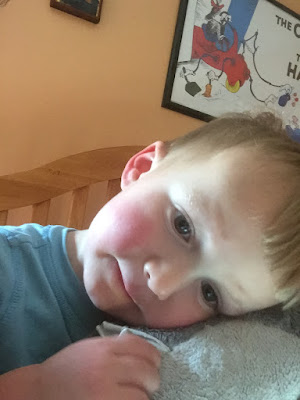 It has also been a big week for A... This guy has been interested in using the potty / accepting of my potty treats (aka bribery). He actually came and got me today and said potty and walked me into the bathroom. So turning a corner maybe? I'm not getting my hopes up but I'm also not trying to totally ignore him because he is motivated and interested.

We are out of the Lenten meal schedule and onto some of the weekday favorites... (except by Lee but he is hungry so he eats it anyway) 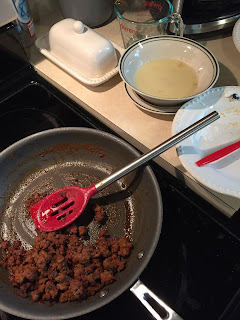 Which brings me to my main point. The meat and more importantly the grease. The grease from the ground meant from a store is kind of a watery goo. The grease from the 1/4 cow we got from 15 miles down the road is straight grease. We'll be welcoming another 1/2 cow here before too long and we're trying to use all the meat we have before the new one. Lee cooked brisket today (hello temp sensor cooker) and it was a-mazing.

This picture pains me so... 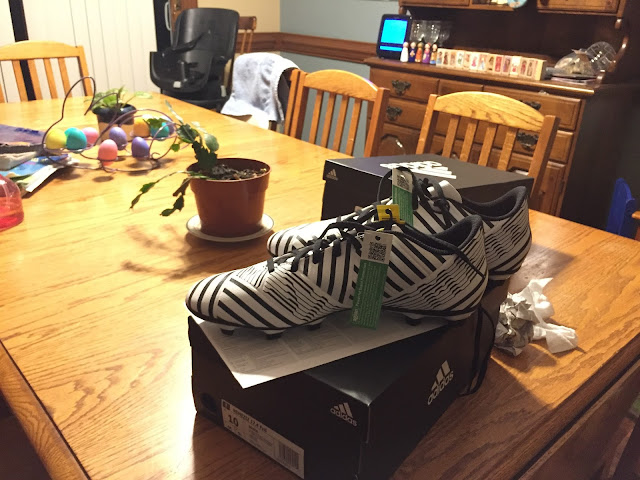 The cleats I had since high school finally bit the dust last week. like dry rotted and the pegs fell off during practice. #ripcleats   Also those cleats hurt my feet because they were way small so after some price and SIZE shopping these are the new keepers. Trying to not memorialize my old cleats too much but gracious... babies will do a number to your foot size and also I need a new pair of Brooks running shoes and those are more expensive than these cleats!

The last 28 hours have been a barrel-o-monkeys.... 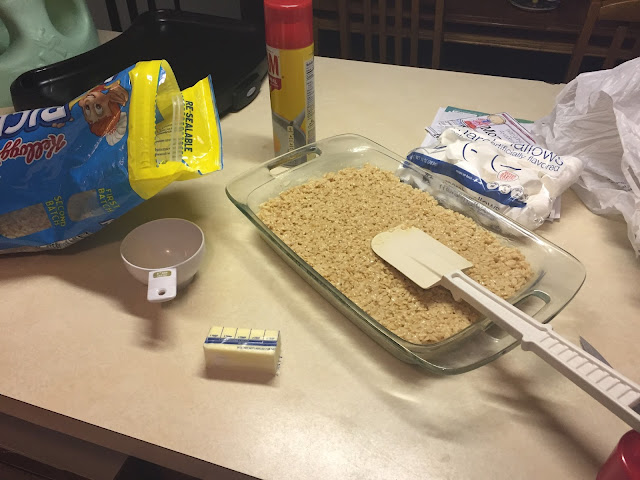 Thursday evening was R tee ball and E soccer practice. We stopped at the Dollar General for marshmellows because R has bake sale for pizza luck the next day and Rice Krispy treats are my game for bake sale. BUT DG was not taking credit cards and I carry about .24 cents in cash around so that was an 8:15 P to the M bummer. I wen't out and got the necessary mellows after showers.

Lee woke me up to make them. I was happy to get to make them because when E had pizza lunch and 2nd was on bake sale duty it was the FLU OF 2018 around these parts so they settled for store bought goodness. 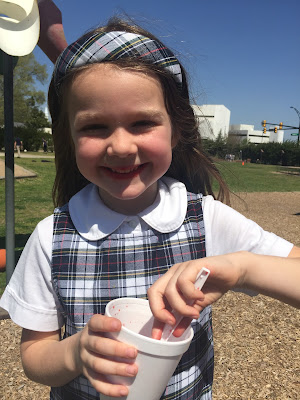 On top of the pizza lunch (which I have never been to) there was a fiesta wrapping up our school's annual fundraising campaign which I somehow ended up co-chairing. So Sno-Balls it was 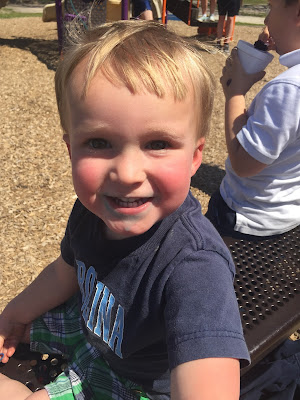 A and M snuck in 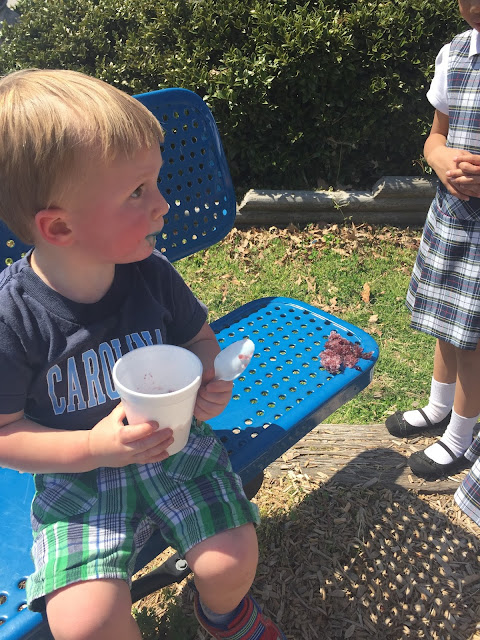 A got a Sno-Ball and a half because the lady doing it gave him another half after he and I polished off the Blue Raspberry because he kept asking for purrrrr-plllll. 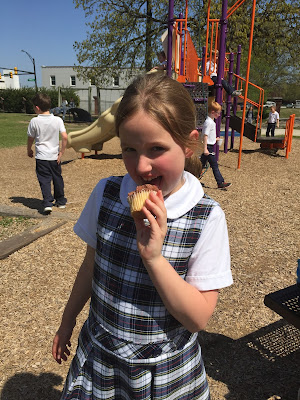 As if pizza lunch and Sno-Balls weren't enough. E got an extra blast of sugar because it was one of her classmate's birthdays.

Basically for me that meant 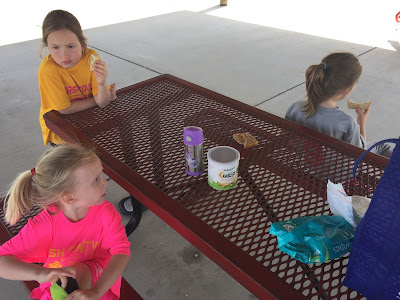 We did lunch in between the soccer and tee ball games (praise the LORD we live close to the fields) but still we opted for eating at the field. Lee and Jibbe were able to be at both soccer games (again Thank You Lord) because I was coaching. And E's group is kind of really intense which is really fun and nerve racking at the EXACT SAME TIME. 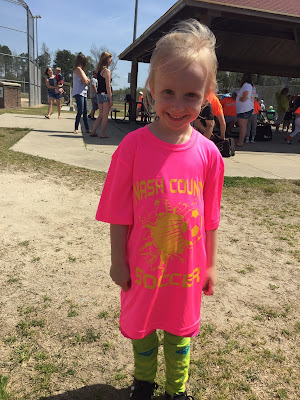 M's team is cute. They are the Flying Squirrels. M wanted to be the squirrels but Flying Squirrels sound way cooler. But also she and I tell E and R we eat squirrels for lunch everyday and it drives them crazy so it is kind of an inside joke between me and M -which I love. M scored 2 goals and after a sluggish start pepped up and looked great. 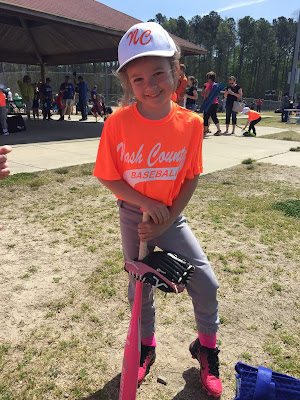 R had tee ball for the 4th season if I am not mistaken. 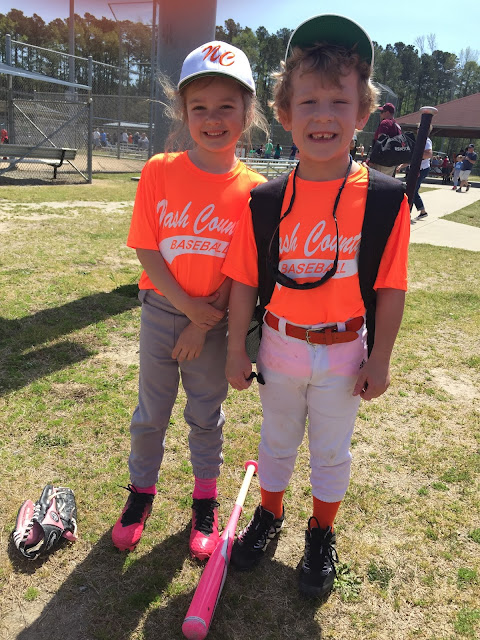 They're going to get married one day. 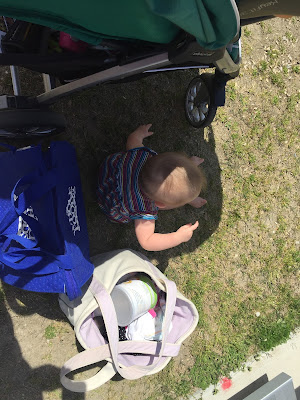 C was a trooper but was sooooooo  so so very done when the tee ball game started. 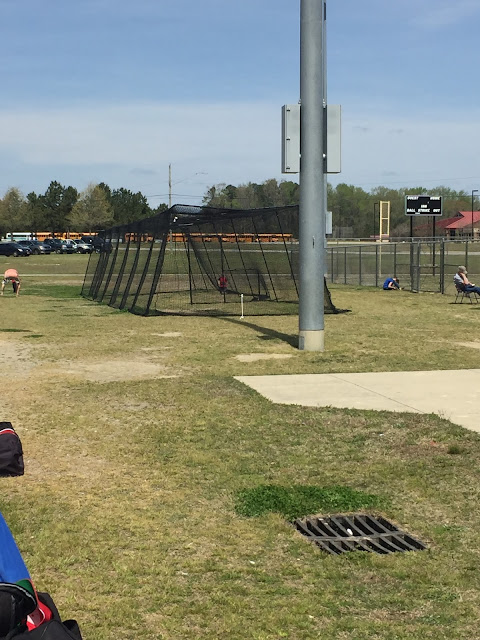 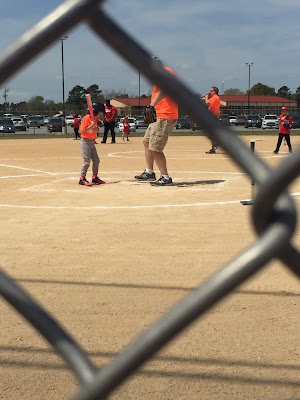 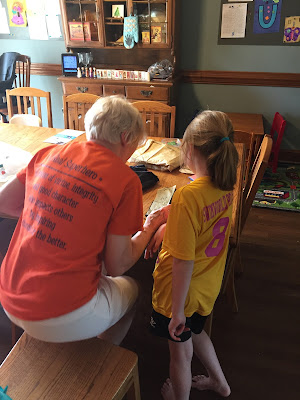 E had a good game. She ran a lot and played goalie for a quarter (chip off the old block). She cried about the ref-ing and complained that she didn't want pink on her jerseys but SE LA VIE... pretty par the course for her. Her team won a good game and it is such a joy to coach even if my other kids are melting down 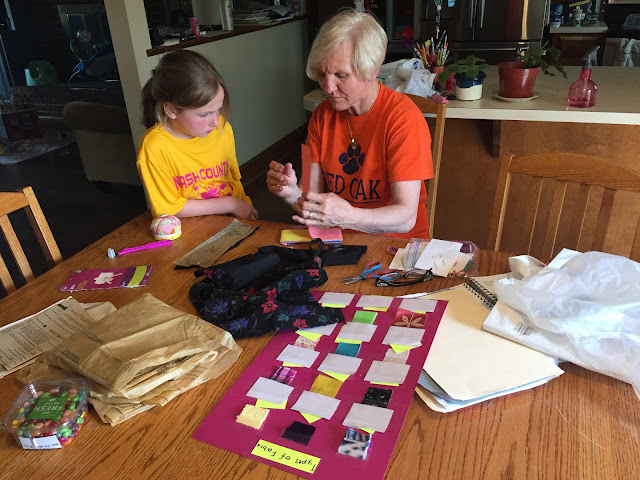 E is trying to wrap up a bunch of badges for AHG.

Which is exciting and nerve racking at the same time.