On Lent and Other Liturgical Musings

Lent started in what seems likes 1.5 millions years ago but really I guess it was only 6 or 7 weeks. This was the scene on the Sunday of Cheesefare (aka the last day to eat anything and everything before Lent starts Monday - yes not Ash Wednesday... we sneak a few extra days in just for kicks). This all shook out two days into Papa's six month day stint with the flu - which no one else got - Praise the Lord. 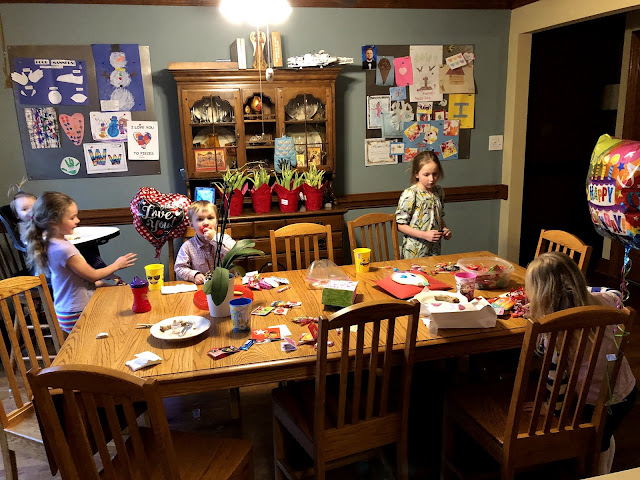 I was gifted a copy of the Catholic All Year Compendulum and picked up some good Lenten ideas I wanted to try out. One of which was no sweets/dessert. The kids have parties at school so I'm not going to even go there and I wouldn't want them making a big deal about it. 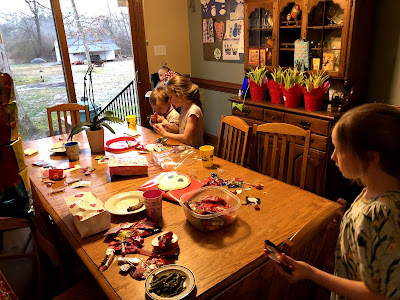 Anyways so we had our last dessert for a while and I let them go out with a bang. We had two big boxes of sweet and treats that had been collected from various parties and celebrations. I let them pick 3 toppings for: 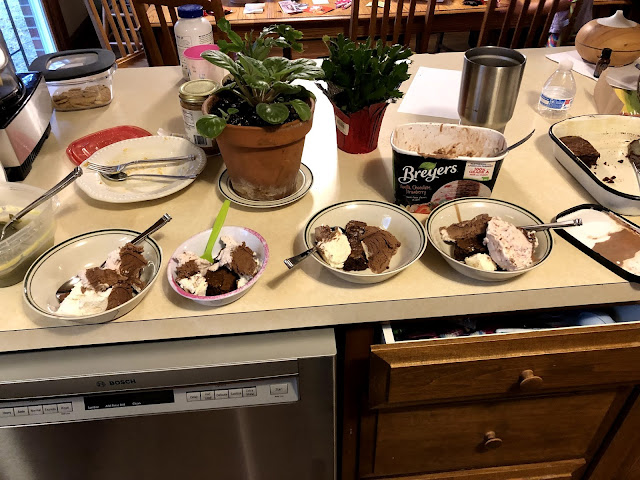 Their ice cream (I polished off the box) and warm (yes I actually nuked them for them because Lent was nearly upon us) brownies... 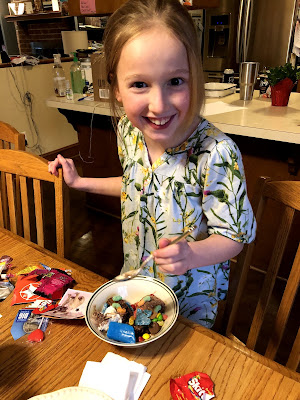 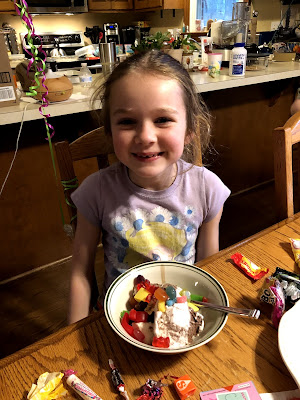 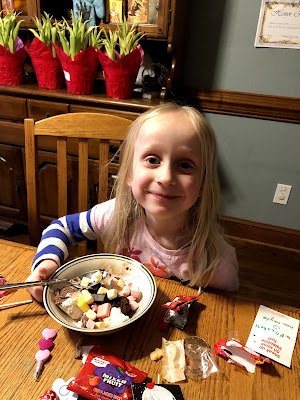 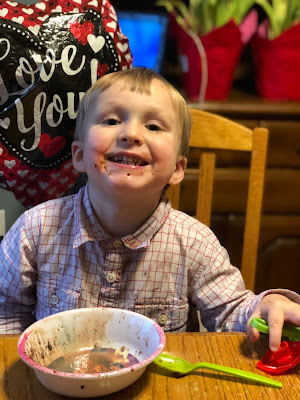 And I think we have a new tradition in the books. I will say that there have been some very yummy and tempting fast-friendly (aka for those not eating dairy) desserts after Presanctified Liturgy this year that have been a sacrifice not to dive into. Hand raised in the group who wanted some. 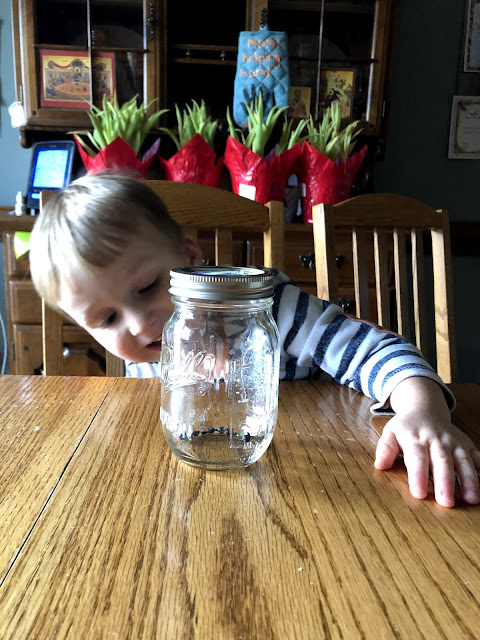 Next from the Catholic All Year suggestion book was a bean jar. This has been a good one but I need to do better with it next time around. The idea is you get a bean for a good deed or sacrifice or something. Then on Pascha there's a jar full of Jelly Beans - on for each good deed bean that made it in the jar during Lent. I've given beans for good pray time behavior, clearing dishes, Andrew saying grace by himself, putting stuff away after school (and not leaving it scattered all over the floor), church (Liturgy, PSL and stations) behavior, helping me out with anything, and, a freebie, for not getting dessert. The kids have enjoyed it and my issue is I need to do the beans in the moment or in the day because I forget and the kids needs the immediate reinforcement. Do I wish I could take beans out for bad behavior, yes -but I don't. 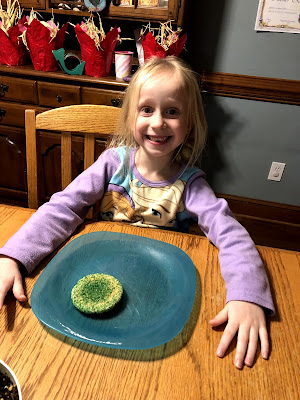 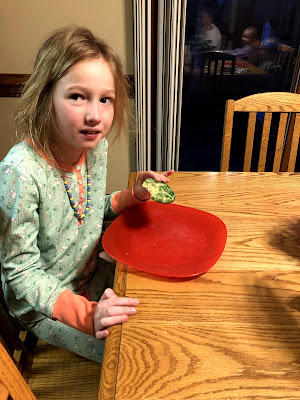 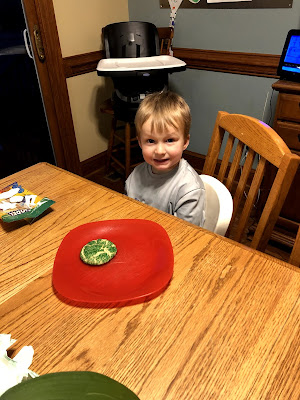 Leftover from the St. Patrick's Dance 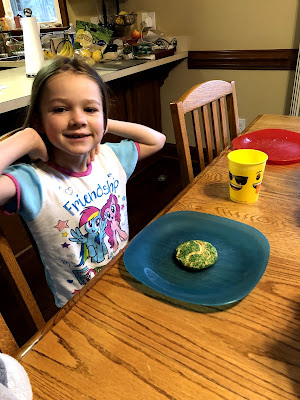 That Grammy made - that was a fun treat. Usually I do green mac and cheese and other green stuff but with it being on a Sunday this year I didn't. 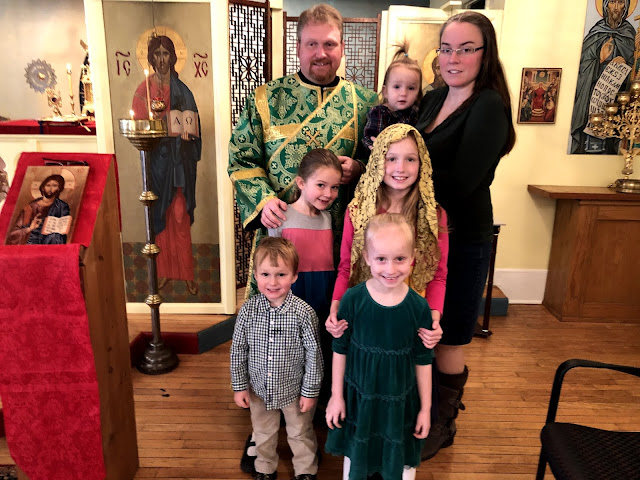 Our family green photo. Lee and I are never usually in the pics and I don't think you can tell that R, E and C are wearing green but they are. I love Lee's green vestment so I requested the family pic after church : ) 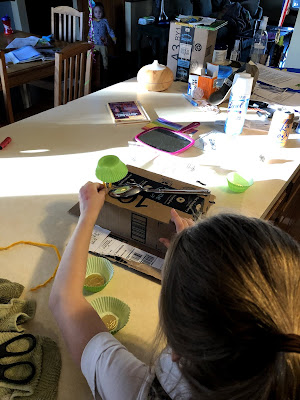 And last but not least. First grade would not be complete without the leprechaun trap project. R basically had no idea what she wanted to do.

So when I noticed we had green cupcake holders I threw those in front of her with some gold coins and... 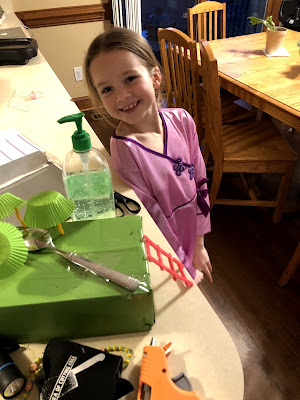 This is what you got. The trap was to fall on the leprechaun when it tugged on the gold coin (in the cupcake holder) after it saw the gold coin in the reflection of the spoon - the spoon was 100% her idea. 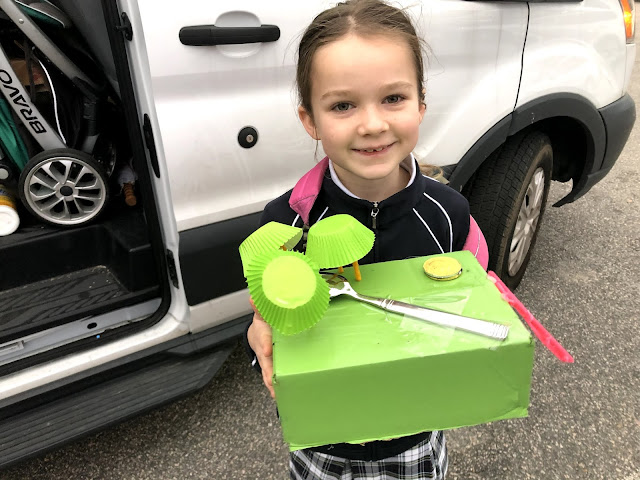 Fortunately the leprechauns didn't take my spoon but they did do a number on the traps and somehow all got away.