Two and a half weeks before Christmas, St Nicholas stopped by. The big girls and I were coming home from swim meet number one of the month and church. Papa was supposed to be bringing C and the boys to church but two of them had runny noses so we opted to keep them home. 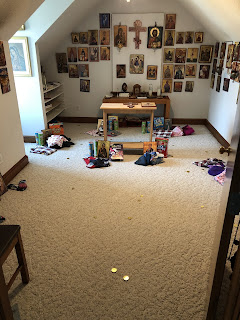 The advent project for the week was going through toys, desks, space - anything to find for St Nicholas to take. Next year we need to have a bit of ramped up effort I think but St Nicholas came just the same. 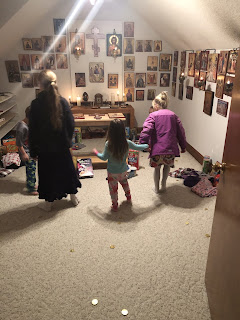 This should be the last year St Nicholas visits this chapel. Some time in the nearish future the addition will be started and the chapel will be right next to the garage - strategically placed for daily prayer time and no more traipsing upstairs every morning before school and praying you don’t step on a lego or Barbie shoe! Addition talk is for another time but I can tell you everything is purposeful and utilitarian about the whole thing. 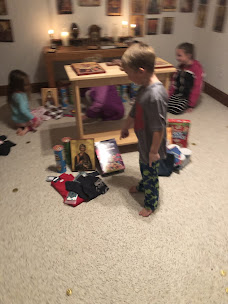 The kid received their Christmas outfits - which I’ll have to get the older girls in on next year because they weren’t fans - all the eye rolls. Everyone got two packs of the same Pringles because Pascha baskets had a variety of flavors and mom had to hear all about that, sugary cereal to share - all crowd pleasers, the big girls received new coats which seeing Es reaction was great because she informed us weeks ago that she wasn’t going to wear her pink and orange coat from last year so she had been wearing a fleece and hoodie to school because it was getting cold and she was standing her ground on the coat. I told her she needed to add a coat to her (not a single toy) Christmas list (sign of the times, I was sad) so when the coat I had in my closet for a few weeks came early she was thrilled. 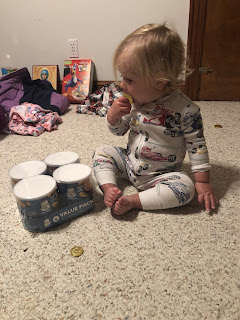 And of course there were plenty of gold coins to go around because that’s really what St Nicholas brought right? That and a great selfless example.
Our family celebrates St Nicholas Day much differently than others - some people get their shoes or stockings filled with treats, some people have St Nicholas come on December 25 and leave presents under the tree. I’m not really sure how we got to this point of giving St Nicholas toys and other items to take to give to other kids and in return receiving a small mixed lot of goodies and clothes by everyone’s icon - but I can tell you, I love the tradition for our family and it makes me want to find other ways to celebrate the lives of the saints in our house so we can all be encouraged by their examples.
at December 29, 2020