Just because this guy has been here 16 months. He is so stinking cute. He is still very much not walking. But when I hold my hands out when he’s holding onto something, he takes a halfhearted step forward and flails forward for me to catch him and he thinks it’s wildly hilarious. He probably could use a haircut but I know what haircuts do to baby boys - insta-toddler and I’m not ready for that. Plus he’s suuuuuper cute when he is crawling and he shakes his head and his hair goes flying. Everyone loves him around here and carries him around like he is theirs - and some people get in trouble for it. J loves to help Papa unload the dishwasher in the mornings even though Papa would prefer he didn’t. He is such a sweet, cuddly part of our family and I’m pretty sure we are way better off because he’s here. 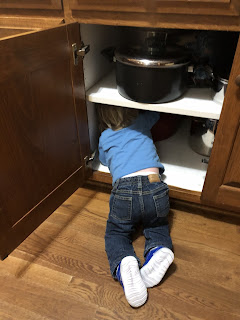