Soccer wrapped up for everyone 2-3ish weeks ago (along with just about everything else) here's how it shook for us: 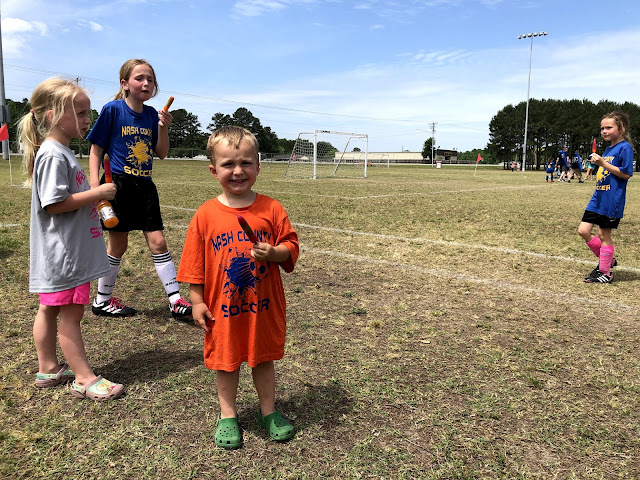 Pretty standard Saturday for us 3+ hours at the field. Four players, three teams, two big sisters coaching, one ornery, snack-consuming little sister and one coach-mama who is crazy, blessed and having just as much fun as the kids she's coaching.


A - he definitely had his moments of greatness and moments of being 3. The county mixed the 3-4 boys this year so he was the youngest as they come. Sitting and laying around the field during the game were not encouraged but did happen on more than one occasion. It was pretty easy (and funny) to spot the 3s at the last game because they were all sitting out while the 4s were still out there playing. A did somehow manage to score a goal this season and I don't think he really realized it was happening while he was doing it. Looking forward to next season - he wants his team to be named the chickens.

M - I think I had coached about 75% of the girls on M's team at one point in time so we had a pretty firm basis to go on. The county threw everyone for a loop and moved us up to the big field which I wasn't thrilled about but it turned out to be okay. Games were good but trying to coach girls to play on that size field at practice was difficult. M refused to play goalie - which was fine we had plenty of volunteer/victims : ) M scored a handful of goals and was one of the younger players out there - with her BFF of course. Defense is something we'll work on for next season and not going too far forward - but when you are 5 and the ball is way on the other side of the field it is hard to not follow it.

R - For having not played soccer in 5 seasons, I'd say it was a good season for R. Soccer doesn't really fit her personality but I'm so glad we did not do softball - I don't think I'm softball mom material. R played forward for the season and if we could just focus her into the ball when it was close to her she'd be pretty good I think.

E - She was definitely one of the oldest in her age group. She begged to play up so she and R would not be on the same team BUT I'm glad that didn't happen. E played mostly forward and a bit of mid. She shook off a bit of her timidness and I actually told her to stop pushing people in the second to last game they played. If we could get a locked ankle that would make a world of a difference. 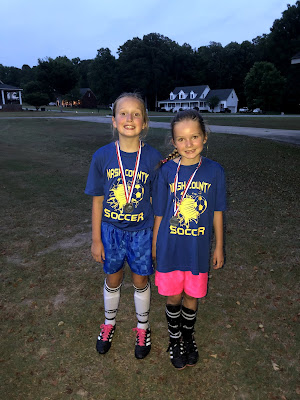 Coach MOI - Even though I know I could easily not coach, I really do enjoy it. I mean sometimes the kids will drive to absolutely nuts at practice but what I 'get out of it' - the teaching and the fun and the moments of - of my goodness they really get it - make the time put in totally worth it. I will say coaching a group of boys is challenging compared to girls. Boys are really busy and girls just love to chat. Having M's team on the big field is the first time I've actually written out subs and who is playing where - which in the end was a huge help because juggling subs and equal playing time is not my forte. With E&R's team, I am ever so glad I did not coach them. I was the assistant but they definitely benefitted from being responsible to someone else - which I knew it would be. They couldn't have asked for a better coach.

Overall - A's team lost a game and won the rest - they were a motivated groups of little guys to watch. M's team remained undefeated for the second season in a row. M scored the winning goal in our closest game thanks to our faithful assistant who reminded me and everyone on the team we HAD to score and we only had 4 minutes to do so. E&R's team didn't lose a game in the regular season and tied the eventual tournament champions during the regular season. Their team was probably a lower barrel team to start with but their coach really brought them together as a team and pushed them to be runners up in the tournament. 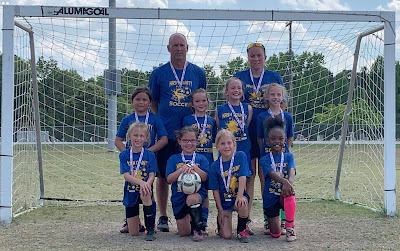 Email ThisBlogThis!Share to TwitterShare to FacebookShare to Pinterest
Labels: soccer, things i think