Linking up with Kelly ... let's go in reverse order because it has been that long (and doesn't include any of the crazy from this week - that's possibly worthy of it's own post) 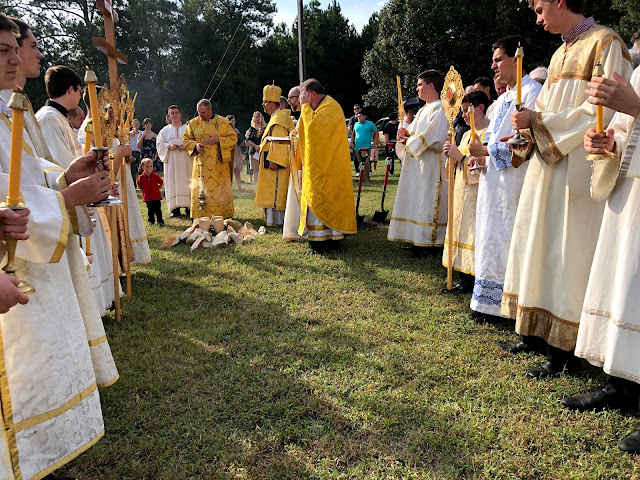 (A supervising the clergy : )

Our bishop came and blessed the grounds/site/cornerstone for the church that is being built. If you thought single parenting kids at church was interesting then you should give an outside church experience a whirl. Complete with blazing hot temps and a few fire ants smack dab in the middle of rest time.

In reality it was a really good time and the kids did quite well - all things considered - and we got a special blessing for baby number 6 which was great. Last week I was kind of just blocking out L&D (because who wants to do that!??!?!) but I've really tried to shift my mentality and focus.

Also, less than a week until a whole other person is a part of our lives??? I mean the baby has been a very real reality in my life for the last nine months but when you get to put a name with a face and a sibling with their siblings that's when the reality of a new baby can really hit me.

M and the rock wall.. 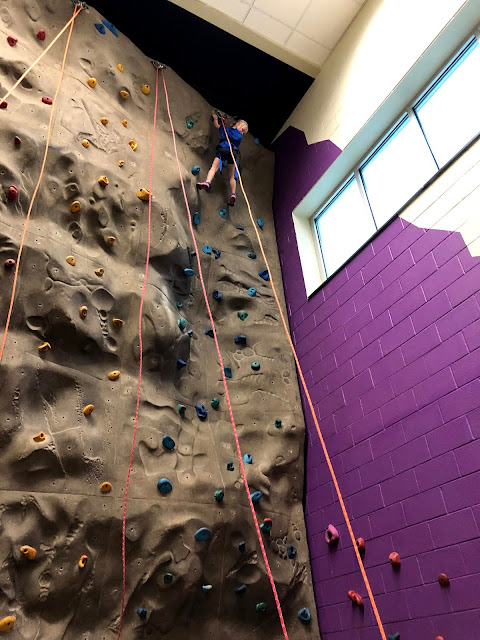 M made it to the top of the rock wall this week. Note the verb climb was not used. Well partially climbed but mostly was assisted all the way to the top. I think this might give her the confidence to actually climb it next time - but she was thrilled either way.

E has some pretty high aspirations for swim this season... 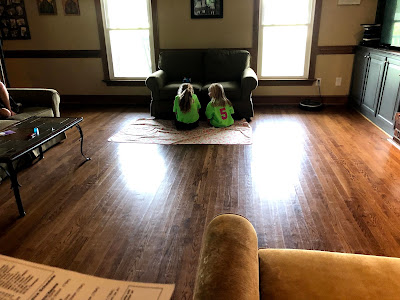 Which will require her to really work hard at and outside of practice. I would NEVER tell her not to try but it is going to be a huge stretch. She has taken to doing some exercises at home which R and M will sometimes get in on and C finds wildly interesting and she gets right in the way of her.

I've encouraged her to run a mile once a week (or more) but I think half the thrill of that is getting to use my phone to track her run pace. I've thought about getting some sort of FitBit device but I'm not sure I'm ready to invite that into the house yet. 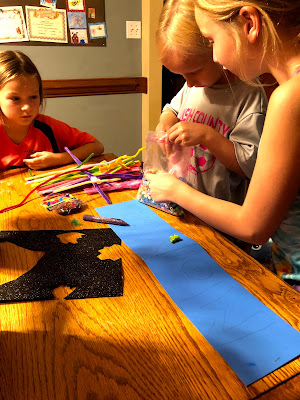 Y'all know me and a project. I've got to block out mental energy and patience to get through them. But this one is an easy one that big sisters remember doing so they had to see what was going on... 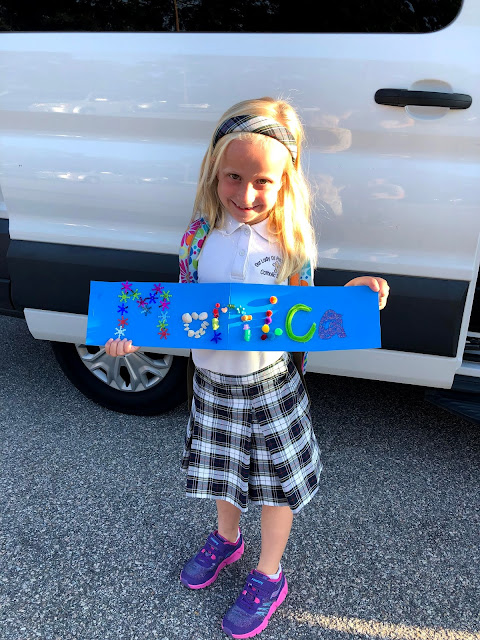 The hot glue gun got us through and this was the final product!

AHG is in full swing: 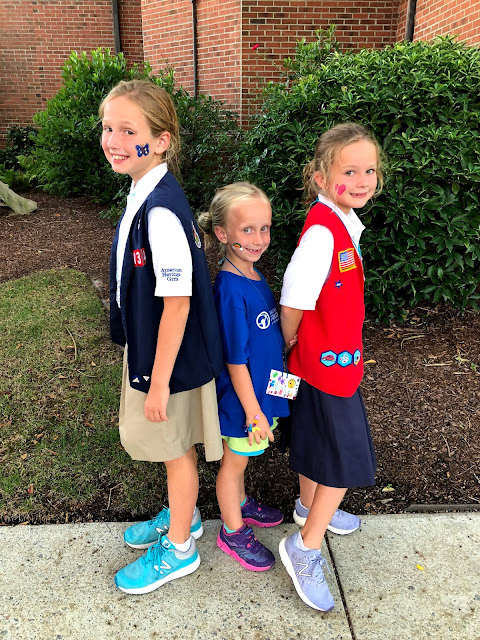 This is actually from the kickoff meeting and the girls got their faces painted - which they thought was the best so we had to document it because it came off before bed. E moved up groups - which I think she was ready for and it already figuring out how many and who can help her with badges she wants to do.

Fall activities are in FULL SWING... 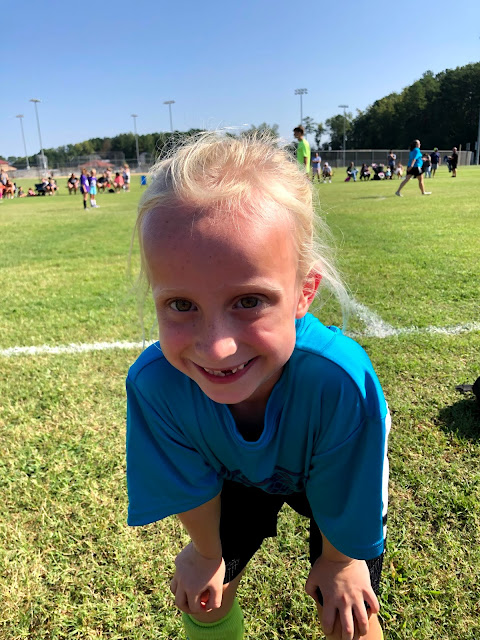 I love a schedule so we've been in the groove now for about a month and it feels pretty manageable. E and R started swimming in mid-August and M and A started soccer (with E and R helping me coach). Helping is very loose term but nonetheless they'll learn early to step up to volunteer. AHG for the big girls and we let E add children's choir to her line up of activities. Having a set dinner plan with quick interchangeable options is huge. I don't know why it took me until last year to see that but now I know the dinner drill requirements and it makes evenings so much less stressful. 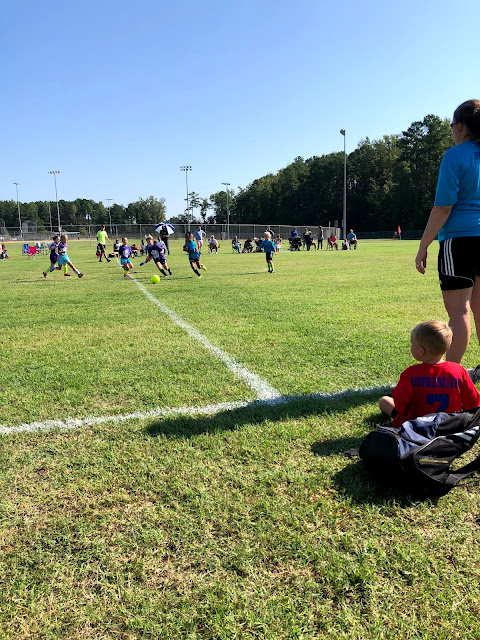 A opted to be the Sharks although the Chickens was a very close second - but I'm thrilled to not be shouting Chickens!!!!!!!! during out team cheer. M (and her friend) picked the Groovicorns - which if you don't know are way cooler than unicorns so check out the double sided sequins book - and I blame my friend (for buying her that book) ENTIRELY for having to yell Groovicorns for a park full of people to hear. I think I laugh every time with cheer : )

Yes I'm coaching (with some serious backup assistants). Yes I'm about to have a(nother!!!!!!) baby. Yes I'll probably take a week or so off from soccer but then I hope I'll be out there with new baby in tow. I make no guarantees but I sure do enjoy it. And aside from getting outrun by the kids it is going well. Between the boys and girls teams I've coach well over half the kids which is fun to watch them learn and way easier when you aren't starting from scratch because now they pretty much have a clue as to what I'm trying teach (that's another loose term too : ) 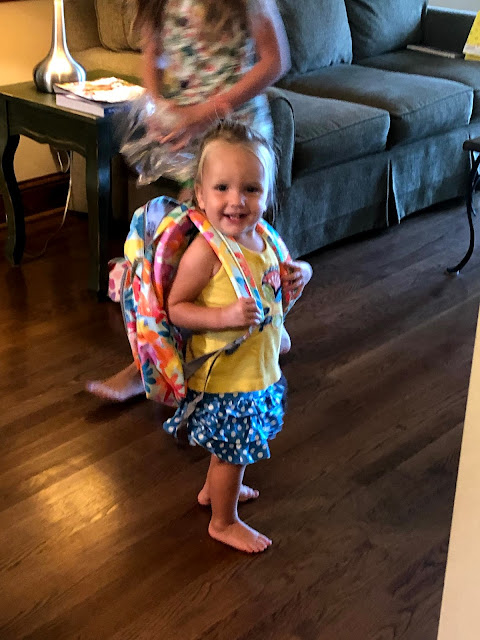 This is from the day when C's bookbag came a while ago and she proceeded to march around the house shouting 'I pre-tee, I pre-tee'

School is overall is going quite well. Everyone is happy with their teachers and figuring out expectations and all that fun stuff. M and C probably had the roughest restart runs. C had about a week stretch where she forgot how much fun she had and decided she needed to scream when I left. Which I hate leaving a crying kid but ever since that rough patch I open her door and she (tosses her bookbag to the floor) goes in like she owns the place.

M was an interesting case too. New school. Lots of new faces. New schedule (hello all day!). New everything. So basically the first few weeks were really tough. She hated the towel I packed her for rest time - even though it was green - it was too small and the class was too noisy to sleep - she's definitely my best rester if she rests. Everything was a problem (or at least she wanted me to see it that way - to everyone else school was great). Honestly I did see a 180 degree different kid from the one who was here this summer - maybe not everyone else, but I could tell a difference. That first full week of school I finally saw the M I was used to out on the soccer field playing with her friends. It was good and it was relief. I put alittle reward on the table if she knocked some of her school stuff off her plate (but mine too because its K and basically everything at home is parent driven- HW, reading, sight words, spelling etc etc etc). She rose to that challenge - like I thought she would - and despite everything in me that says one sport per season (and an oldest child who has no problem reminding me of my policy) M went back to swim this week and is thrilled. Kindergarten is definitely a huge adjustment and now that we're a month or so in, I think M's found her groove.
at September 21, 2019