7QTs - All About School

Linking up with Kelly ... before school pics there was back to school prep

Oh the things we do to get ready for the school year around here are some times fun and some times un-fun but we do it anyways. First on the list (without photographic evidence) is shoe shopping. I don't love buying new shoes. They are super expensive to me (even though if you break it down on a daily usage basis - they aren't!) but we take the school aged kids shoe shopping at a kids shoe store because I feel better about spending money if it stays local/family-owned.

Let's just say shoe shopping 2 weeks before school starts with 5 kids and half of the greater metropolis is not for the faint of heart. I think we got out in about 30 minutes. C tried on a pair of shoes from the sale rack because the brand is one I like and she was done. A took a few pairs and he was good to go. M, R and E were different stories.

No one could find the right color or style or non-light up shoe. Praise the Lord they wear uniforms to school because if shoes were a microcosm of clothes shopping with those 3, I might lose it. Finally M decided on some sparkley non-pink shoes, as did R but she had to get tie shoes because that's my rule for 2nd graders... learn to tie your shoes. E took the longest and ended up with a shoe that is probably a half to 3/4 size too big but she insisted the next size down felt weird and hurt her foot and after about 30 minutes and 50 pairs of shoes between the five of them - Lee and I said forget it and just wear big shoes. 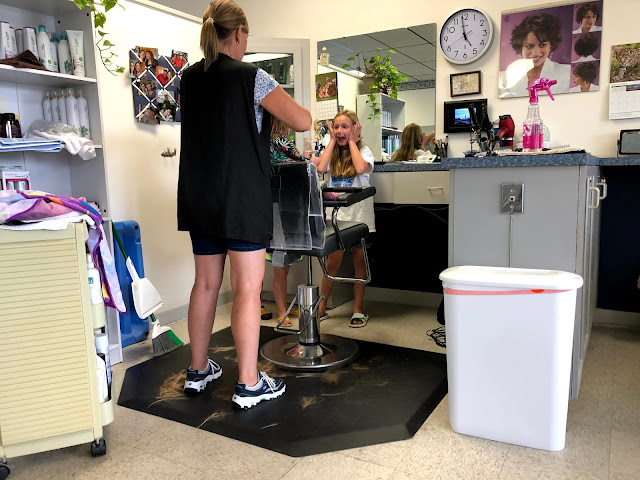 Everyone kind of needed a hair trim. E adamantly wanted to wait for a big hair cut until next school year. R was the same until the moment she sat in the chair but I told her I wouldn't let her make a super rash decision in a matter of minutes. M got a bit more than the big girls. C even sat for a second and got trimmed up (see above). I got my hair trimmed and can I be honest and tell you I really wanted a hair professional to just tell me I didn't have the TERRIBLE TERRIBLE L word that gets in your hair (which I don't) but after the girls bout with it this summer I need confirmation. So now I can scratch my head knowing it is probably just pregnancy or stress (that's what the hair dresser said). PHEW!

Also, can I tell you this hair dresser was great. We went late one afternoon. We were the only ones there. We didn't have to play 25 million questions of why we have so many kids/siblings because she is one of six. It was a profound relief to not have to sit and discuss the in and outs and hows and whys because she'd been there done that - and she talked to the kids about large family living. Totally great!

Attempt to do a marathon day at the pool... 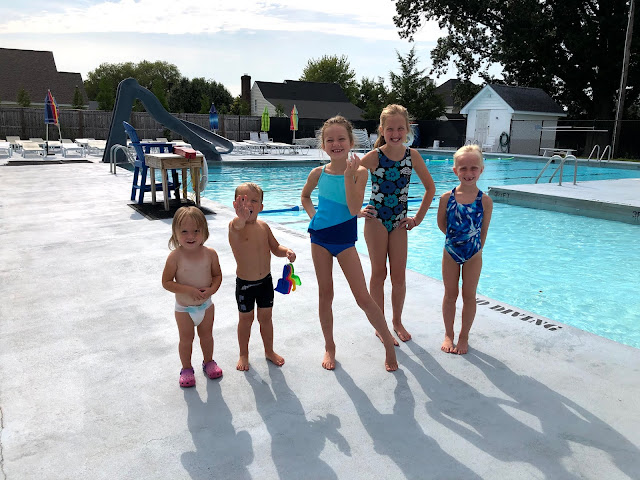 And it was a valiant one. We got to the pool right before opening (ten) and staked out a good spot and dropped the coolers and bags and towels and stroller. We had put the word out for friends aka friendly reinforcements to help keep us busy throughout the day. 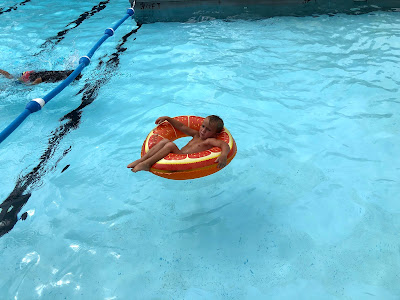 The idea was born after talking with a few other moms just to see who could hack the pool for 10 hours straight. My kids like the pool but 10 hours is alot to ask and they don't love the pool that much and C is a crazy and that's all you need to know. Everyone was on board to last the whole day though 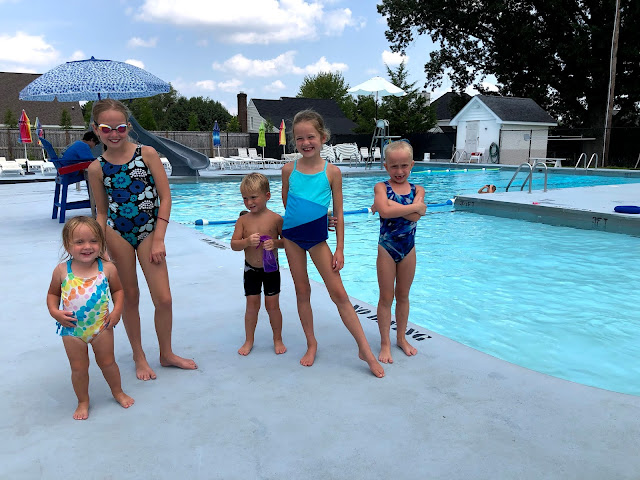 This is our mid-way pic. 5 hours in. We had lunch. I brought tons of snacks and water and a juice box for lunch and dinner for everyone plus everyone could visit the snack stand every 2 hours. We were doing pretty great. 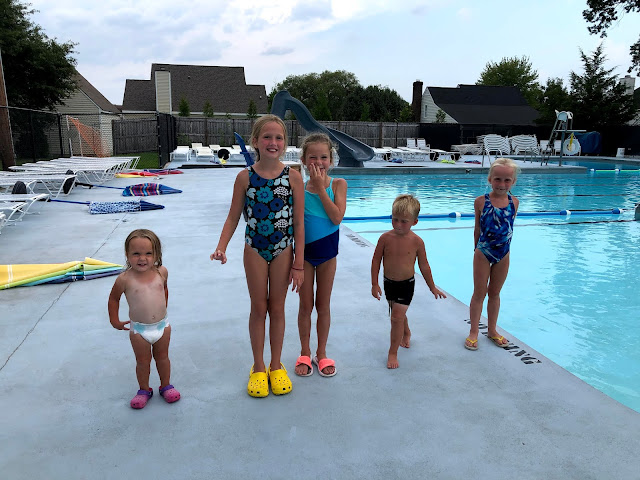 No visit from Papa.

The kids were actually bummed we didn't do it.

Next year though. Next year we are going to try again and maybe even make I survived the whole day at the pool shirts.

After our marathon school shoe experience, it is a good thing we don't have to do to that for clothes. I've been on the hunt for some heavy duty white polos because everything I found - Target, Old Navy, Amazon, uniform supply store were basically see through (well not really) but I'm not putting tank tops under the girls polos everyday. Can we just get a thick polo PLEASE!?!?!

I finally gave in and got Lands End and spent way more than I wanted BUT considering the polos M is wearing now were worn by E 5 years ago and I need these new polos for E to last through at least 3 girls, I figure it might be best to pay more and know they will hold up?

The school supply run. Last year E reports that I did WalMart pick up for a good chuck of their supplies and now that she said that I do remember something like that but Wally's swapped out stuff they didn't have for things I didn't love so it was back to the old fashion way of supply shopping. 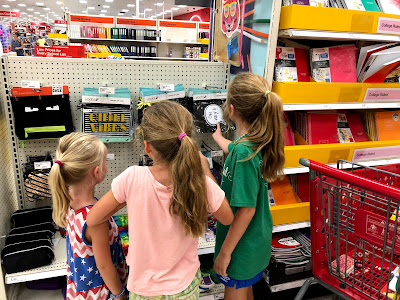 I felt like we were being super effective on time but we got sucked into the Target vortex and probably spent over an hour and a half there. I do have memories of going supply shopping - for whatever reason Office Max sticks out in my head so maybe the girls will remember our Target runs for years to come. 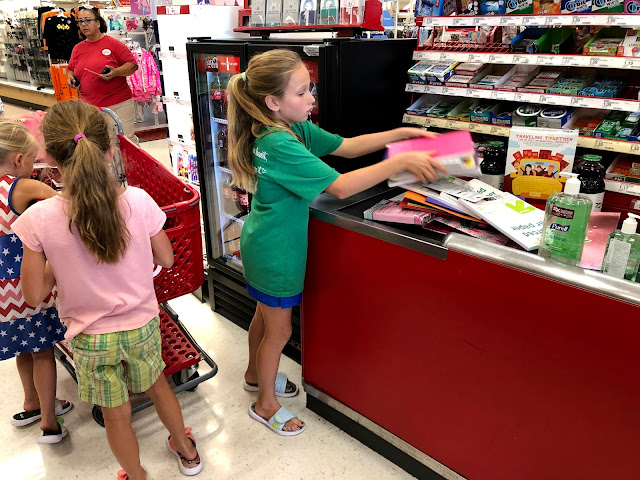 There is something exciting out picking the exactly right notebook and cool folder so here's to the experience and thankfully we only do that once a year!

We divided and conquered the Target run spoils... 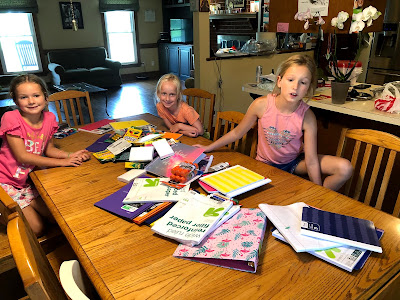 The day after we went and it killed them to not be able to touch ANYTHING. I think we ended up with every on the lists except for the fat pencils for M which Target ended up sending to us free shipping because the Target App is the bomb.


I don't know if s'mores are a back to school tradition but they are fun! 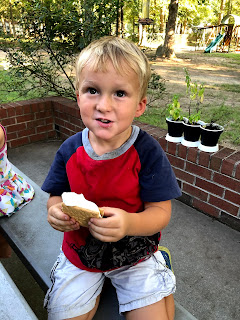 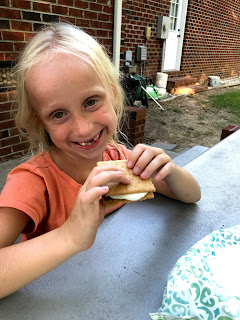 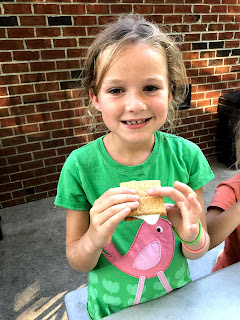 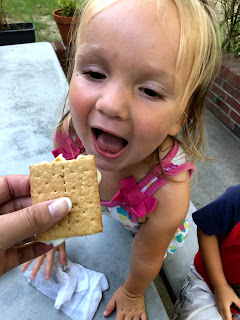 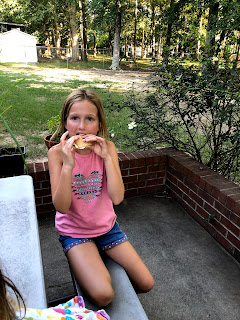 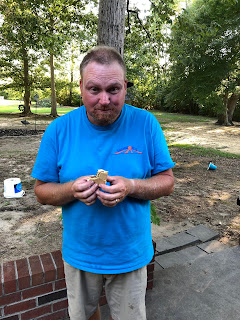 I distinctly remember looking at the clock in between dinner and dessert and it being 6:15 and thinking to myself.

Email ThisBlogThis!Share to TwitterShare to FacebookShare to Pinterest
Labels: Catholic School, out and about, preschool, swim time