Honestly all the doctor appointments really started piling up right after we got back from the beach - the second week of July. Between biweekly OB appointments and ENT checks and dentists and someone getting a tooth pulled because of an abscess - oh and I don't think I've mentioned this but maybe I have.... there were several heads that had lice in our house at the end of July - which was terrible and I don't think you can fully understand the implications of lice unless you have had kids who have had it and you are constantly wondering if you nitpicked well enough and olive oil and yellow Listerine and apple cider vinegar are your BFF for days. On top of an extremely busy pool season plus being a thousand weeks pregnant... I probably need therapy to process all that happened between July 4th and J's arrival.

In fact I think the last three weeks had been even more medical-filled and we have the stacks of bills to prove it. So thankful we live in a time and place that we can get all this stuff taken care of but man has it been exhausting.

Ear aches
Check ups
Waxy ears requiring colase to get it moving
Dental check ups with cavities found
One of the two cavities filled
OB appts
And the hardest hitter... an abscess on a leg that came out of nowhere

I found the abscess late Wednesday night (8 days before baby J) and I was fully prepared to go to the ER that night and dragged Lee home from his Bible Study - I was totally freaked out because at that point I had no idea where it super painful spot came from. It was not black and blue like a bruise but it was basically untouchable.

After doctor appointment 1 of 5 for abscess - what else do you do when you get some news you don't want to hear because your 39.5 weeks pregnant and ain't nobody got time for an abscess... chocolate milkshakes of course

Thursday, Friday and Saturday were sprinkled with pediatrician visits to the point where I wonder when the credit card company is going to call to confirm they are legit transactions. 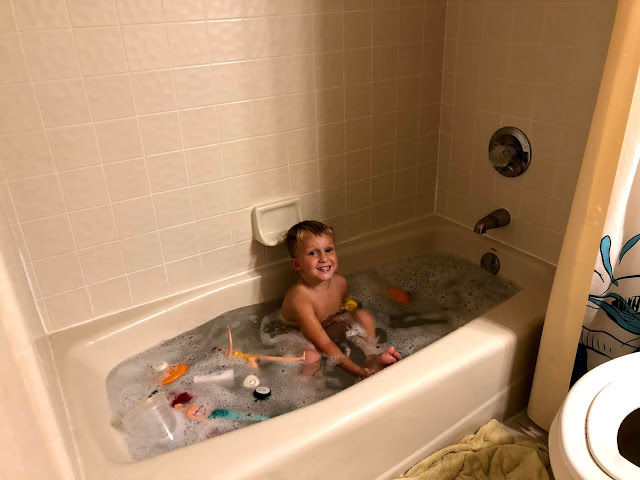 When part of your treatment plan is taking hot baths and because you're number 4, mom never gives baths because showers are way easier... relish in lots of baths!

Saturday afternoon A and I trekked up to a children's hospital to get the thing drained. Now I imagine draining with a needle and some sort of suction device. Well, let's just say that's not exactly what happened.... at all. I was pretty unprepared for the 20-30 minutes of screaming and tears and MAMAAAAAAAAAAAS that is freshly in my mind. 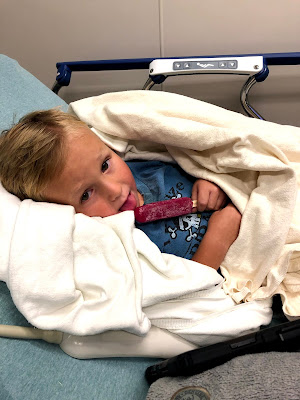 He was so hungry and so pitiful

After two popsicles and watching Thomas on the iPad while soccer was on the TV, A was pretty unfazed. I made the long walk to dig the van out of the parking deck (why would a MAJOR hospital only have about 20 parking spots for both the ped ER and regular ER). On the way in I discovered the van is in fact taller than 7 ft 4in courtesy of the plastic bar thing which I scraped the whole way down. SWEEEEEEEEET

I made good on the chocolate ice cream promise I made before/during the hospital visit and we got dinner while we were there and I drowned all my emotions of the last 6 hours into my cheeseburgers and fries (and then proceeded to feel terrible the next day but it was totally worth it). 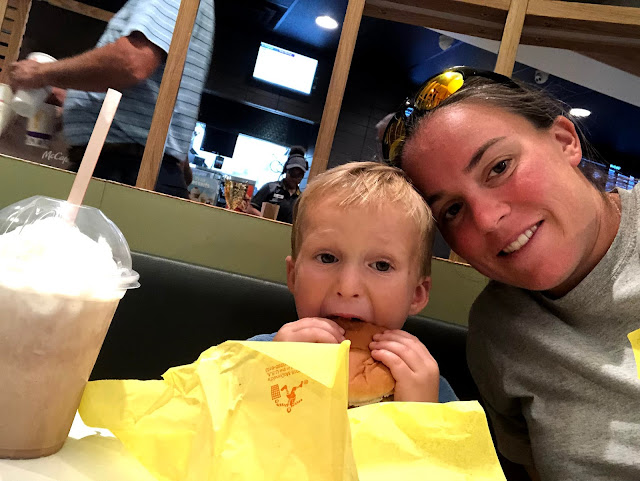 Such a long day!

Sunday was quiet which also happened to be my due date. A's abscess still looked pretty bad especially with the hole from the ER in the middle of it.

Monday held another doctor appointment. A new medicine (not without its issues of course) and hope that we might not have to go back to the ER for another draining of this crazy thing - next time they'd sedate him which I wished they had done the first time. Though, I have to admit, I love to block out L&D but seeing A go through what he did - I have a bit of a different perspective and thinking, if he can do that, then I can do L&D.

Tuesday was uneventful during the day. Tuesday evening Lee and I squeezed in one more date night without a third wheel - which was so nice, and then Tuesday night I couldn't sleep. I was semi-convinced I might be in labor but not convinced enough to do anything about it. Wednesday morning I told Lee I wanted him to go to the pediatrician with me and A which was the final check before another trip to the ER or a wait-and-see because the medicine was working. Then we'd go to the OB to see what the deal was - even though I was to be induced the next morning.

I kept thinking to myself - come on and just hold out until everyone and everything is in place and planned for - PLEEEEEEEEASE.

Well my plans were foiled because my OB couldn't see me until 1 - he was in surgery. A's appointment went well and we did not have to get the abscess drained. So Lee was on kid duty for the rest of the day and I went to work for a few hours and then trekked to the OB.

While there the nurse used the doppler and discovered that baby's heartrate was in the 180s - which is pretty high - especially considering the week before it was in the 130s. So off to the ultrasound room which confirmed everything appeared to be fine and also I swear the tech said something about 'baby girl' - and I was pretty much validated in my assumption that this baby was in fact a girl (so I clearly misheard her). Then my mind floated to the girls name and how I liked the first name but wasn't convinced of on the middle name - much like M's middle name which I have come to adore. Then the 20 minute fetal heartrate monitor. I'm pretty sure I had more than 2 people ask me if I had any caffeine that day to which my reply was, I had only had water and I wasn't hungry.

With the option to go to the hospital then (I wasn't dilated - but maybe in early labor) or go home and drink a bunch of water and eat something decent, I opted for the latter and headed home a bit more assured I wasn't in active labor - I hadn't been in natural labor since R - so 7.5 years ago and I think I was worried I was going to forget what it felt like.

That night Jibbe stayed the night just in case we had to bolt to the hospital - which we didn't but it felt better knowing if we needed to I wouldn't be waking up neighbors and waving them on to our house as we sped out of the neighborhood.

So that's our story and I'm sticking to it. In hindsight the last 3 Saturdays have had completely different feels.

This Saturday - coaching A's soccer game with baby J by our side. I think coaching is semi-therapeutic for me

The Saturday before - sitting in the pediatricians office doing the happy dance that I was NOT in the hospital with baby J and getting the play-by-play updates on M and A's soccer games, wishing I could watch Lee with all five big kids out on the soccer fields, watching Lee single-handedly man the house and the laundry and antics

The Saturday before that one - wanting to be the one to take A to the pediatrician to the final check on the abscess, coaching M's soccer game, getting a text from Lee that said the ER was in our near future, experiencing the ER, coming home crying thankful that A was okay but emotionally drained from everything he went through - mama's of sick kids, I don't know how you do it. A wasn't even that sick or in the hospital for long and it sucked the life out of me.

So who knows what crazy adventure will happen to our house next but for what we've been through, I hope we get a little down time before
at October 05, 2019