Six Pack of Kids - Thoughts on One Month In 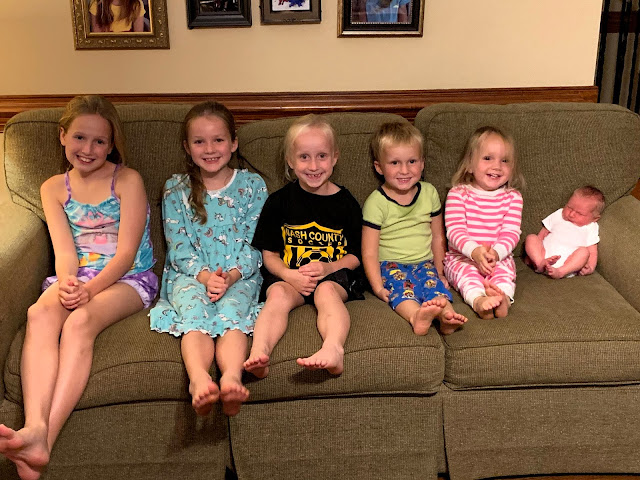 This was the first - and probably only - six kids pic we've taken so far. The hospital didn't have a couch in the mother-baby room so we had to get the first kid picture at home when J was super new. Fast forward one month - how! - later and it probably wouldn't look too terribly different.

If the walls could talk around here they would say that J has been loved into the folds of this family. They would say littlest sis has the best nickname for him so far - Joe-sis - but has already corrected herself to the proper pronunciation of his name - which super hurts my feelings. The walls would tell you the biggest sister adores this little guy and has been known to rush around the house to get ready for school just so she can hold him for a few minutes before it's time to go. They'd say that big brother was mortified of Mama feeding him for the first time and begged her to put her shirt down.

For this mama, it is hard to believe that J has been in this family for a month but in some ways he's been here the whole time. He's a pretty great baby and I really like him - despite his tongue tie which is making nursing more interesting that normal - but will be remedied here before too long. Sometimes I don't know how he has passed him hearing test with all the crazy antics that go on around here - this week was no different but that's for another time.

We have been showered with love and support and gifts and food from so many family and friends over the past month it is pretty overwhelming. No more overwhelming though, when I catch myself literally having to count my blessings to make sure they are all in the car or in bed or where they are supposed to be.

This last month with a six pack of kids and as a family of eight has been wild and crazy - as it was before J graced us with his presence - I really couldn't imagine our family without him. I've already learned so much from him being here and I can't wait to find out what the next month and year will look like with him.