We made it thru Lent to Pascha! The kids have been enjoying chocolate milk from a local-ish (90 min away?) dairy. I used to keep the frig stocked with it in college. Also extra desserts and no shortage of candy and other sweets.
Holy Week was strange but leaps and bounds better than 2020. Because we are borrowing space we actually had Pascha matins and liturgy Saturday afternoon instead of Sunday morning. Such is the life of a mission church but next year we should be in our own space as the domes were placed on the roof this week.
I found these dresses last year and they didn’t disappoint. They were waaaaay longer than I imagined so I’m glad I didn’t go a size up for M. I compromised with E who’s initial dress reaction was repulsion by get her some heels to go with it. That was a curious shopping experience. For someone who doesn’t love shoe shopping (but I do love a fun pair of shoes) E was trying on 4 and 6 in peg heels - as her first pair - we agreed on a slightly smaller height wedge sandal. She was thrilled and can be caught checking them out on herself. Next time I’m sending her shoe shopping with her godmother. I found the boys shirts to coordinate with the pink print on the dresses and for bow ties from Etsy. I will say I think I’m going to have to sew (gasp) a stitch in the back of each dress because the opening in the opening is waaaaaaay more than I would have imagined.
Probably one of the last marching girls pics because E cannot bear it. I’ve had to include her in festive dress selections and the ones we are eyeing for the next year - they are being given coordinating options so they can’t say they totally hate them (looking at you Christmas 2020). 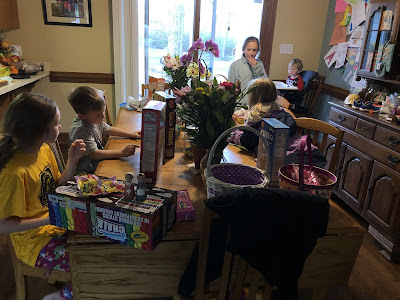 I hid baskets this year since we were home Pascha morning. It was like Christmas in one really intense 5 minutes of screaming over new socks, chalk, frisbees, junky cereal and candy - and of course the tradition peg dolls. A and C got one and I ordered a Shining Light doll for them and J but I ordered too late - shock! I think I did a pretty good job on cereal and everyone’s favorites. Apparently they aren’t sharing boxes - except with those who have created a pact with. I can’t say I totally blame them because I see they have to share lots of things in a bigger family so I’m trying not to force this sharing and respect their favorite foods - even if they hoard it.
Also during our night prayer we start with singing Christ is Risen from the dead... which we sung (to seemingly no end at Matins and liturgy) and it’s such a fun song to sing and I really appreciate it bringing attention to liturgical season we are in and how Pascha just isn’t one day - it’s a season to celebrate just like we prepared for it during the Lenten season.
Linking up with Rosie... just because
at April 08, 2021