Just Because - Swim Wrap and Recap 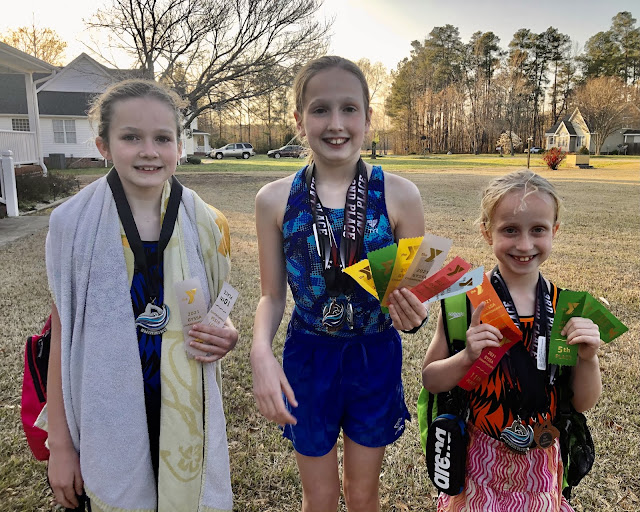 Short course - which is actually a longer length of time than long course swim - wrapped up a few weeks ago. Short course is yards; long course is meters - who knew? It’s been a great season especially given covid. Meets with distancing and fewer swimmer for warm ups have been successfully pulled off and kids have put lots of time and effort into swim.
The season wrapped up with the state wide (but divided into three regional Y meets) Y meets. Last year the big Y meet was the weekend before everything changed. So it was good but weird.
Weird because times were stacked against kids who weren’t swimming right next to each other. Weird because there weren’t a few hundred cheering parents. Weird but no complaints.
Es overall season was marked by coming up literally seconds short of her goal of getting to Age Group champs. It was frustrating to watch but also interesting because I think she really finally ‘got’ sprinting in a race. She had a great last meet and being top of her age group helped her cause.
R saw lots of time improvements over the season. The only event she didn’t do super great in was 200 IM and I probably wouldn’t do so great in it either. Breaststroke is still her favorite. She’d probably rather be playing soccer to swim and claims she daydreams during practice some days - I think mostly she has a good time. I was so happy that her (and Es) relay won 3rd so she wasn’t the only Kibbe without a medal. She’s got a bad bday for short course and ages up 6 weeks before the season ends so she’s one of the youngest swimmers by the end of the season but proved she can hold her own.
M. M. What can I say? She’s probably the funnest of the kids to watch race. She was not at the top of the 7-8 age group but raced like it. She had to race against another 7 yr old who was definitely taller than her and usually didn’t beat her but ended up talking to her and decided they were friends. She is crazy determined and her 50 fly time rivals her oldest sister - but we try not to compare times amongst family members because it just leads to feuding.
Since masking WAS required for spring soccer up until last week we will likely be sticking through long course unless major developments happen in summer league.
We are so appreciative of the countless hours and energy and effort our coaches have poured into our team and kids.
Linking up with Rosie... just because
at March 31, 2021