One Whirlwind of a Journey

I have been a bad family member for not posting this earlier, but here goes. Some time last fall I had this brilliant idea that Lee and I should tie in going to see my grandparents (E's great-grandparents) into a work trip. Why you may ask?

1. E is the first and so far only great-grandchild to my grandparents (that we know about... just kidding!!!)
2. Who wouldn't want to take a 7 month old on a 9-11 hour car ride depending on traffic?
3. I failed to mention the destination - New Jersey. Clearly, NJ is a great state to drive through in the middle of January and they don't have problems with snow/ice at all.

I am going to try and hit the highlights of this trip and not dwell on some of the more frustrating details - because I never do that. Here goes...

The trips starts off with a bang. E and I went to check out a Mother's Morning Out (MMO) program before we got on the road. And of course, when we get home to pack up and head out lo and behold, she pee-ed through her diaper and clothes and her car seat is wet!!! Awesome-ness. So, first text/call is to my sister-in-law (of course) because she is the Queen of all thing Britax. After that minor mishap is dealt with, E and I get on the road with a super great friend of my mother-in-law (she knitted E this amazing blanket - I'll have to do a post on that. She is also helping me with the stocking). Me, E and V are headed up to DE - or Delaware - not to be confused with Dela-what and Dela-who. The trip in somewhat uneventful. E is a trooper in the car and when Mommy remembers that the horn does in fact wake her up, she is an excellent car sleeper. I have this really good habit of honking at bad drivers because I think it is a public service to tell people that they are being morons on the road and not only endangering their lives but mine too.

We make it to DE in record time (given we have the Beebster). No problems with roads, weather or traffic. It is frigid there though. Probably in the 'teens in terms of the temp and there are massive piles of snow. Lee and my mother-in-law are already at my mother-in-law's cousin's house. We have a nice time that night and everyone loves watching E and loving her up!

The next morning is is about and literally 10 degrees outside - I could feel my nose hairs freezing when I breathed in (TMI?). We packed up and headed out for NJ. Gotta love that Turnpike. No, seriously there are only 16 exits or something like that and the rest areas are in the middle of the highway so there is no question or any possible way to get lost. We make it up to the Wood with our trusting GPS and head to my grandparents house. Lee and I were talking and I think it had been 8 or 9 years since I had been up there last.

My grandparents were super happy to see us and had tea and snacks ready. My grandma had one of my baby toys stashed away. I'll have to post a pic of it because I don't think I took a pictures of it while we were there. After snacks we headed over to my uncle's house who graciously hosted us for two night. Special thanks to my cousin who gave up his room - he slept in the basement which is strikingly similar to what my brother does when he is home.

Sunday we went hunting around for a Ukrainian church - only about fifteen minutes away (I wish our church was 15 minutes from our house). Temp when we left was about 5 degrees. I love it when older ladies come up to me and start speaking in Ukrainian - nod and smile, nod and smile. We also were treated to a trip to the Deli and got some Product (otherwise known as the best potato salad in the world). Dinner that night was AMAZING. My mom and all of her siblings are very talented in the kitchen. There was a small gathering to watch the Jets game - they lost but it was a good run for them. Also, my cousin who is my age made the trek in from NYC to see us. That was awesome and we got to meet her BF. We said our goodbyes before bed because between work and school everyone was gone when we left.

Only regret was not taking more pics. My grandparents were not in the picture taking mood so I did not get a pic with them and E - well not a good one.

On to Atlantic City for the Pool and Spa Show. Another 2.5 hour car ride which was a sleeper for E - and we made it. It was the first time I had been to AC and I don't think anything can really prepare you for it. We got situated our rooms without too many problems. There was a welcome party that night we we loaded E up in the Beco Baby carrier (lifesaver!!!). We get there and after the ridiculously long line the security guy says "No one under the age of 21 is allowed in." So I give him my ID but he was not talking about me - he was talking about the beebster. Really, really??? Clearly she is not going anywhere in the Beco, but I was not in the mood to argue so whatever. We had a horrible time finding a place to eat with a baby so we just ordered room service. 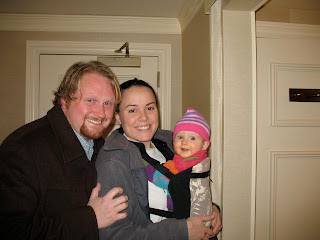 Next day we walked around the show with the bibis in her stroller which was great. It was interesting and E got to look at everything!!! Well as it turns out there was an impending snow storm the next morning - when I was planning on heading out so change of plans. Call up a super great friend of mine Mary in DC and see if E and I could crash at her place. Of course she said yes! E and I headed out mid afternoon for the 5 hour trek to DC --- in the hopes we would miss DC rush hour traffic.

Now GPSs are funny things! Whenever there is new construction this presents a huge problem for the driver and the GPS. Well GPS is not the most updated one and it took me on country roads for the first 90 minutes which was horribly frustrating. 4.5 hours later E and I make it to DC without a problem. She slept for some of the way. We get to Mary and Luighi's and E eats dinner and unwinds s bit and I put her in the pack and play for bed. No problem right? Yeah right!!! An hour later she is still howling. This was a problem for several reasons:

1. I have no idea how long she is going to do this.
2. I know Mary, Luighi and I will not sleep in there basement apartment with the noise
3. I don't want the upstairs guys to get annoyed with a screaming baby at 10:30

So what is the solution... pack everything back up and head home. This is the four place that E has been in 6 nights and she probably was not thrilled about it. I fuel up the car and get a Mountain Dew and Peanut Butter M&Ms for me and make the 4 hour ride home. We roll in at 2:30 AM and we crash... until about 7 when E decided it is time to wake up. That next day was a blur. It was a whirlwind of a trip but would definitely do it again!!!
at April 16, 2011