Thoughts on Nine Months Out

A has been alive for 18 months now - 9 of them spent in utero and the other 9 he has spent in this wild and crazy world of ours. Seems fitting to mark an occasion like this so here goes... 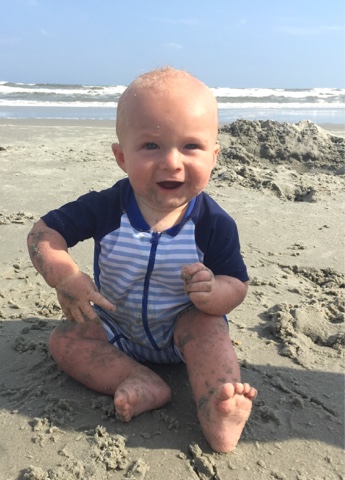 I have a hard time imagining life without A. Literally my memory is that terrible, or maybe it is my mom-brain kicking in. I can remember the doctor saying he was a boy in the delivery room and thinking to myself - well we're sticking with the name we picked 9 months before. I even asked Lee before I got my IV if he was still good with the boy name. A was not the first or even second boy name that we would have used for one of his sisters. The first two names are such obvious name guesses that I think we took everyone by surprise with A. I will say, I love his name and it fits him perfectly and Athanasius is such an awesome saint (and so is his first name saint too) that the only possible middle name that could rival it is Melchizedek - but no need to go there quite yet!

So there's way more to the story then just his name. The first few months we definitely had some getting used to A being a bit more noisy and stinky than the girls. He spit up like crazy and presently is quite a messy eater - so much so I broke down and bought a silicone bib - I'm not a bib person but A had me sold after about 2.5 weeks.

Speaking of food, he is about 3 months into solid food and mostly liking what he tries. There are some foods that I am convinced he doesn't like the texture of like white potatoes and sweet potatoes. He doesn't like Cheerios too much anymore and Lee blames me for only giving him Cheerios for weeks. He does like Life and MultiGrain Cheerios so possibly its a sugar thing but at 7 am, he can have whatever. A has been known to eat an entire banana in a sitting as well as bites of apple. He is still very much lacking in the teeth department which has probably helped his cause in the nursing department because the girls got their teeth around 6 months and then bit me a few times and then I shut things down. A is going strong nursing which is great for him but I usually don't lose the last few lbs of pregnancy weight until we stop soooo.... thanks A.

Also thanking him for making Paa-paaaa his first and to date, only word. He is so cute when he does say it though and he really 'learned' that it was a word on the way to Father's Day dinner. He was just riding down the road - Paaa-paa, paa-paaaaa. Super cute. Always super cute are the way his big sisters treat him. The love having him sit in his high chair at the table. They love holding him, talking to him, picking out his clothes, helping give him a bath, shouting Noooo NOOOOO when he is about to pull the phone cord out of the wall.

That being said, A seems much more technical than the girls. Not interested in toys or the jumper but would love nothing more than to pull at cords plugged into the wall and threads hanging from area rugs. He had a mysterious cut on his foot recently and I am convinced he got it when playing with one of the air vents in the floor. He is all over the place doing a strong arm, army crawl. He can get just about anywhere but especially likes the bathroom so we've started closing the hallway doors.

A also might win the award for the longest go-er to work with mama - and not because I want him. I mean I love the opportunity that I have to bring each one of my babies to work with me but there becomes a point when it is not fair to keep them there anymore because they are mobile or really loud or need extra attention. If A sleeps, we are golden. If he doesn't... well it is rough. Aside from the fact it is mentally exhausting juggling work and a baby (literally at the same time), if he is not cooperative my nerves get shot fast. I hate to admit it but I may be counting down the days until he can go to Mothers Morning Out - which is the day after E starts school - which also coincides with my birthday. I don't want summer to be over but I am so looking forward to A being able to go to MMO - and technically he could go now but have you priced childcare for 4 childrens? $^$$$$

All in all A has been such a fun, happy, loud little blessing who still isn't quite sure about sleeping through the night. I cannot believe HE is actually a he because I was quite sure we'd end up like Susan except with girls.

It has been a wild ride over the last 18 months but A is sure worth it.