Going back to get on track(ish)...

Most importantly, if you are the praying type... please pray for a little girl named Martha. She is in a medically induced coma and could use lots of prayers for a fully and speedy recovery. She is the daughter of a priest (who is also a friend) of ours and I can't imagine how her parents or any one of her 5 sisters feels right now.

I told the girls they needed to pray for her and I think it hit home for E because she said the thought of it made her want to cry - yeah me too. 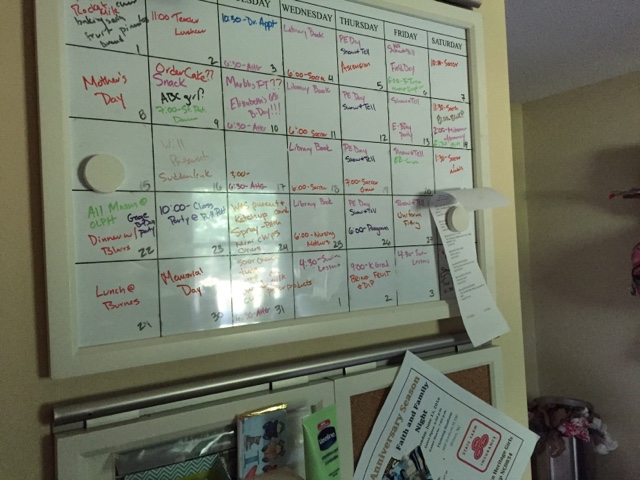 Calendar pic to commemorate the craziness

This was our May calendar and yes we were that busy. Somehow. But everyone is busy so what else is new. Now there is only swim practice to contend with and the swim meets but those always throw a wrench in dinner once a week (but only for six week so we can make it, right?) 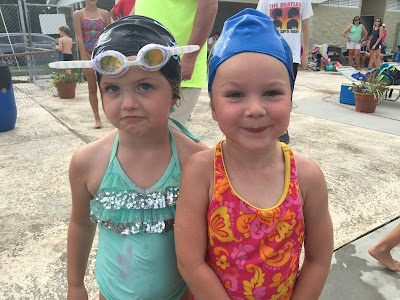 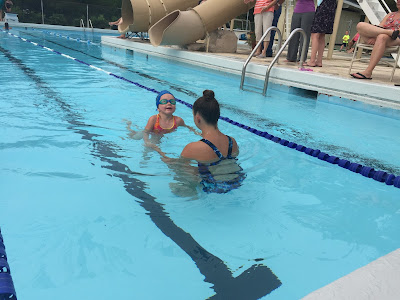 I'm still hoping she's going to swim up to pup squad this season! 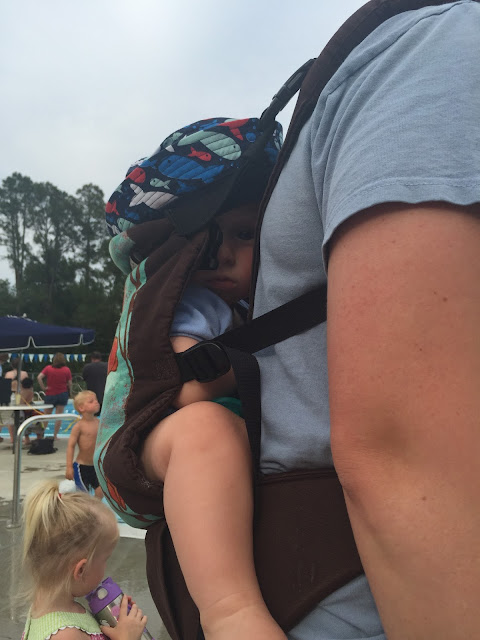 This is how A spends the bulk of his time at the swim meets and it is insanely humid and gross and sweaty but he sleeps and is quiet so I roast. He does make an appearance out of the carrier occasionally and is passed around to open hands... and then this happened:

Well there's a first for everything and in 4 years I guess I should be surprised that it hasn't happened sooner - the deacon's kid. I happen to think that is awesome and it made my night and the implications of being 'the deacon's kid' ought to be discussed at a later date. 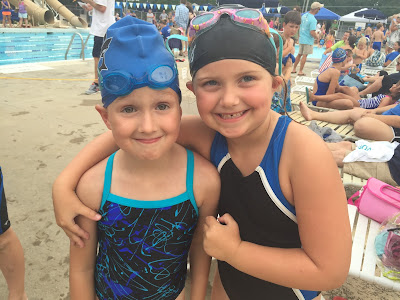 Rival swim teams but still friends from way back! 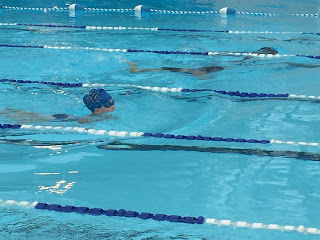 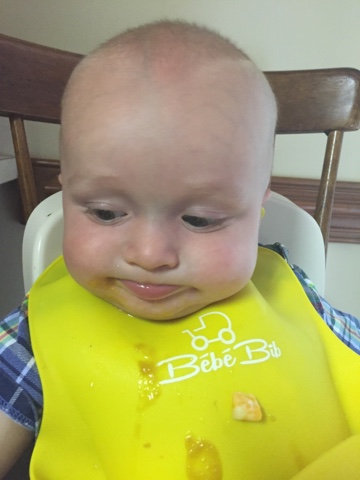 He is insanely cute. He loves making sounds with his lips and blowing air. He has gone on the record says Paa-paaaa on more than one occasion (thanks a lot kid : ) but seriously that makes my heart skip a beat. He has been an utter handful at work because he wants to get down and army crawl and pull every cord out of the wall. He still doesn't have a tooth in sight  and is nearly 9 months! MMO is in sight just trying to hang on for another few weeks... 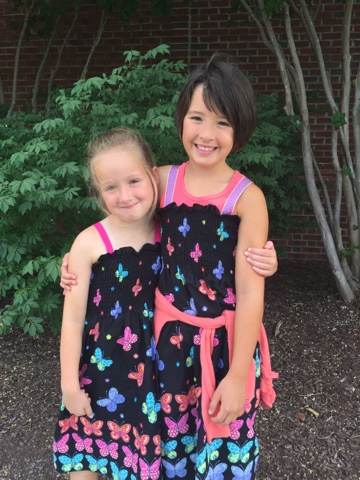 E and friends went to a girls only day camp a few weeks ago and loved it. They cooked, sewed, baked, crafted, and learned about being God's children. They loved it and wanted it to happen every week but unfortunately it only comes around once a summer! 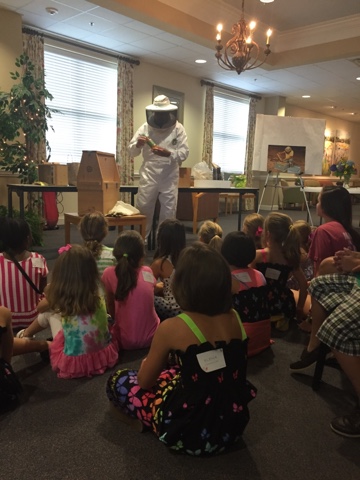 There was even a beekeeper that came and spoke which hit home with E because she loves honey! 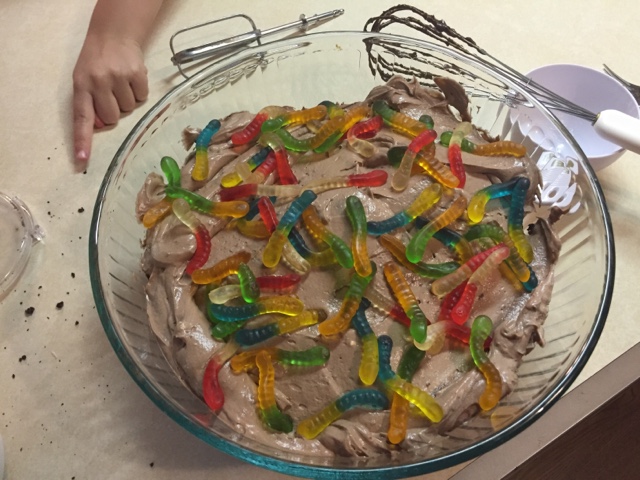 This proves I am super behind because this dirt and worms was from when we celebrated St John the Baptist's birthday - 6/24 (6 months plus a day from Christmas) I'll leave the theology of 'plus a day' to the deacon. 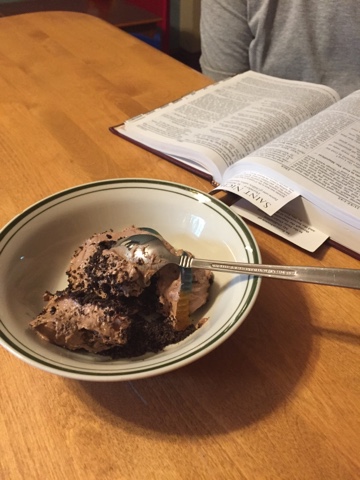 Any how I tried a new recipe that called for cream cheese which sounded awful but it was awesome. Next year I'll try and remember to serve the worms fresh on top because the worms totally contaminated my chocolate source during the later eatings.

Just when you thought the 2 yr old might not make an appearance... 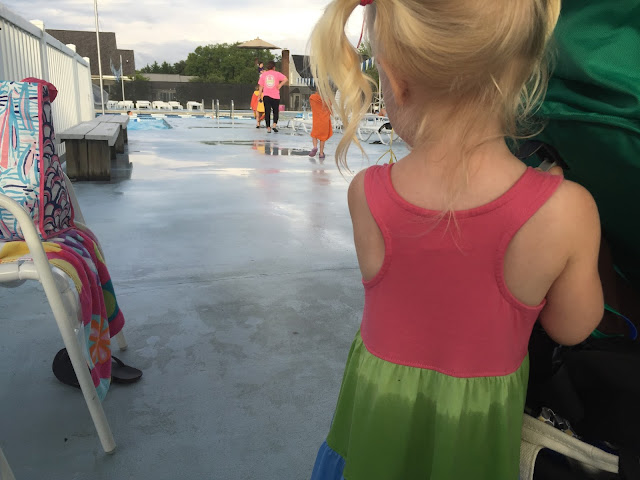 This is what I get for trying to get out of not getting in the pool during E and R's practices. M took it upon herself to sit in the BIGGEST puddle and splash around in it. Well played there kid, well played.