December 06, 2016
Seeing as today is mid-Advent-ish it would seem appropriate to remember how the first half of Advent has been playing out in our house. I LOVE Advent and the Advent-culture we've created and the kids have come to expect (I'd love to create a Lenten-culture as well but I haven't put my finger on the balance between church services... anyhow, another time, another discussion).

We try to focus our 40 days of Advent as a time of preparing for Christ's birth. I just went to confession over the weekend and the priest said something to the effect of we must completely humble ourselves, just as Mary did, in order to fully receive Jesus. How do you do that? How do you teach young children to be humble and realize they have a pretty fantastic life compared to a lot of kids? How do you teach them Christmas isn't all about what's under the tree, it's about who's in the manger?

I don't have the answers to those questions but here's our stab at it...

During Advent we try and do three things each week:

1. Jesse Tree ornaments and daily bible reading - so fulfilling for kids and adults and it is nice to have a tree to decorate that's not our Christmas tree because ours won't come in the house until 12/23-ish and be decorated until 12/24 or 12/26 (gasp!) but it remains until 2/2 or until it's a major fire hazard

2. Singing O Come Emmanuel - so much theology and since we won't sing Christmas songs until 12/25 even though a few sneak in because of school performances : )

3. Service Project (of sorts) - Some are easier and more obviously service-y than others - anyone with brilliant young child service project ideas send them my way! 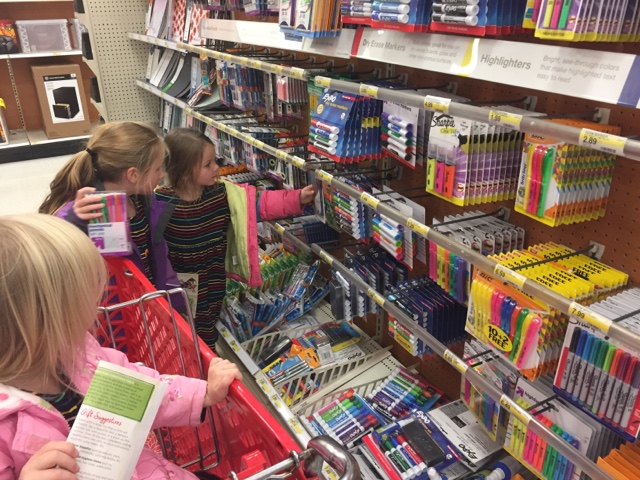 This has become a staple project in our house. 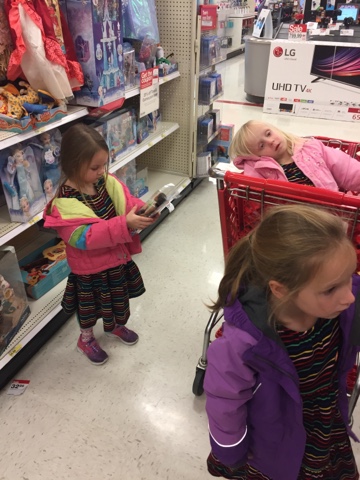 Picking out the fun gift is definitely the hardest part for everyone (and it has to fit in the shoebox!) 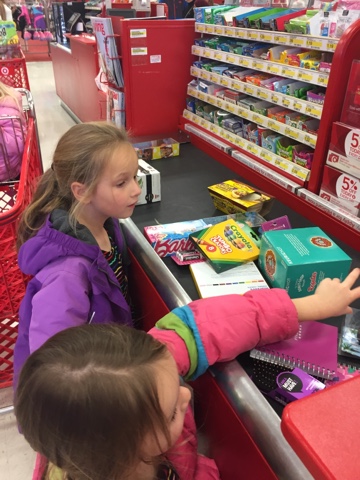 I can tell E kind of gets in more because she's told R and M, okay this is going to be someone's only Christmas present and she makes a point to fill it with stuff she would like. (and if I didn't have a budget she'd find a way to pack some more stuff in there) But it also lends to conversation about people whose parents cannot afford Christmas presents and what that means and how those kids rely on other to make Christmas a special day with a gift 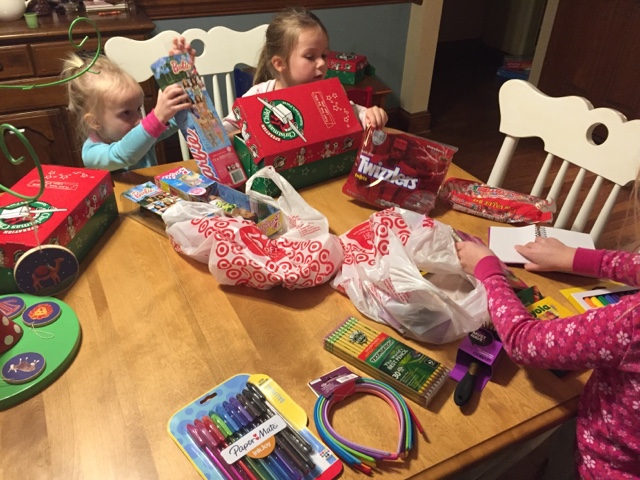 Though it can get a little misconstrued in the minds of a 6 yr old and a 4 yr old because I caught them chatting about having to put their clothes away and... 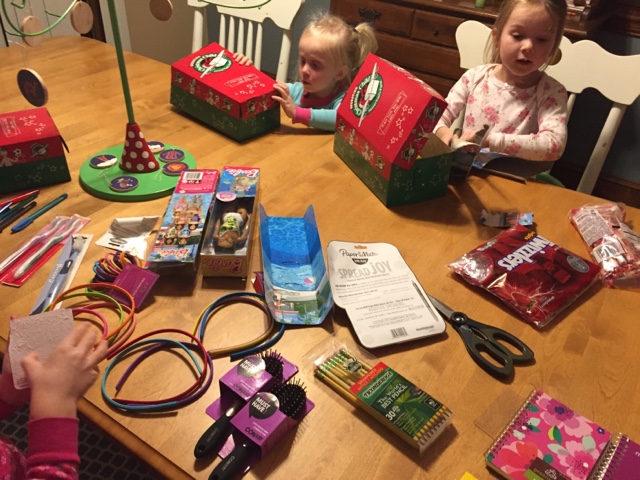 Anyhow... we had to cut the Barbies out of their packages because those boxes were too small. The jump rope from last year fit way better and we couldn't find the $2 calculators at Target which was a bummer 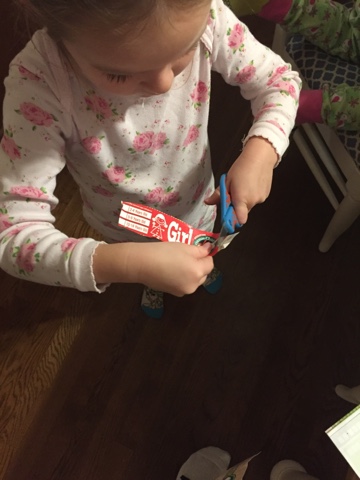 Putting the final touches on the boxes the night before... 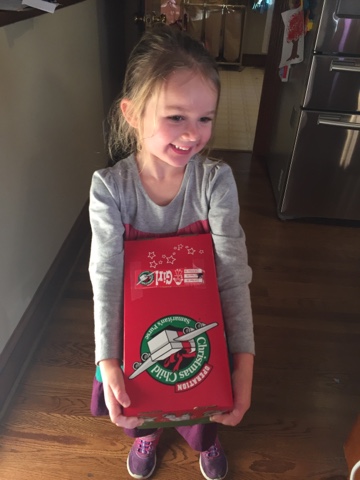 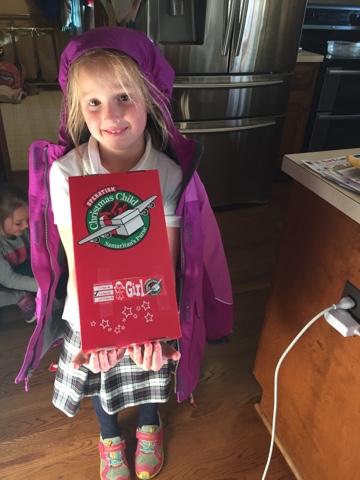 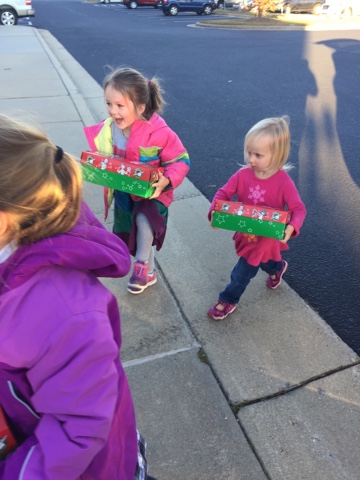 M was sleeping and was super mad about having to wake up but we HAD to get these boxes in as it was the last day and the collection closed at 4 pm and man did we JUST skate in there in time! 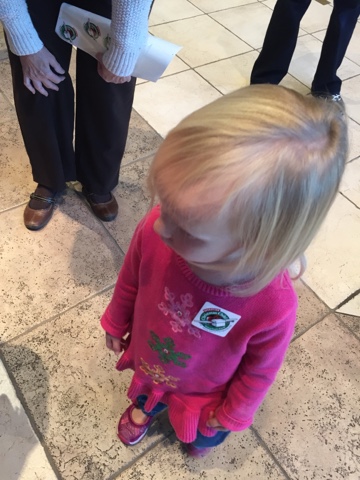 As in they logged out boxes in and put the final count on the big brown boxes and loaded them on the trucks... 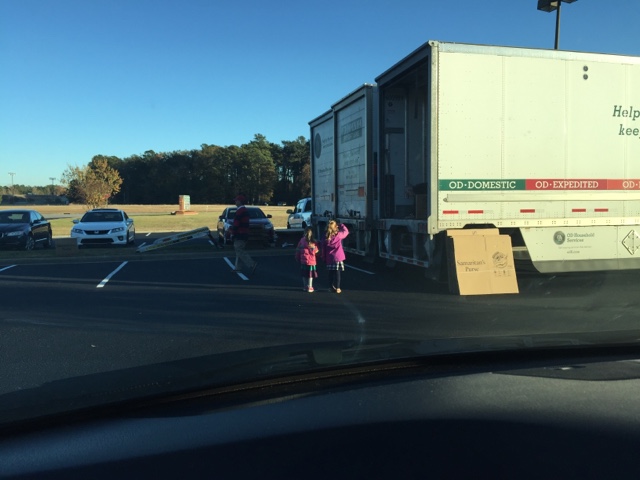 It would have been WAAAAAAAY easier to take these to the drop off by myself or even let R and M take them to preschool BUT what's the fun in that :  )

Week Two - buying food for the food pantry at church 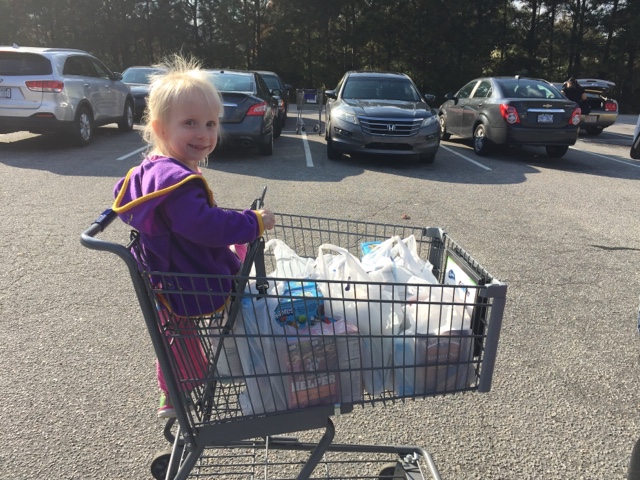 I didn't do a great job documenting this project because it happened right after Thanksgiving and I told Lee we hadn't done our service for the week and we were heading to the grocery store anyway. Sooooo... we scored 44 items for about $40 which was a win. Pasta, pasta sauce, muffin mixes etc etc and the girls insisted on getting boxes of their favorite cereal (Captain Crunch Oops All Berries - GAG!) except M didn't realize it wasn't for her. 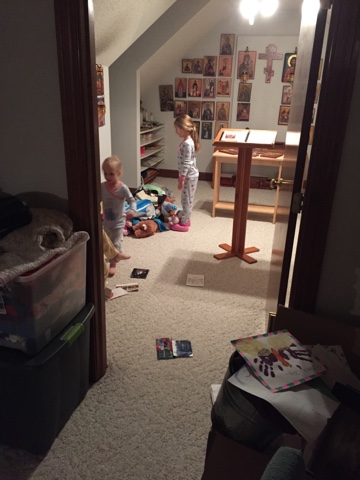 This is probably the most challenging activity for the girls. We ask them to sort through their toys and their animals and give some to St. Nicholas so he can take them and give them to other kids (I drop them off at local church thrift store). I maintain veto powers especially over sentimental dolls and I do ask that there be a consensus on group items but it is still hard at least for E and R. M would have given away half her room but I vetoed some. E struggled hard with giving away a blanket this year - she had 2 plus a sleeping bag and I told her I really wanted her to part with one. It was hard. I was proud of her. It is hard to detach ourselves from possessions BUT if you can learn it early the easier it will be. 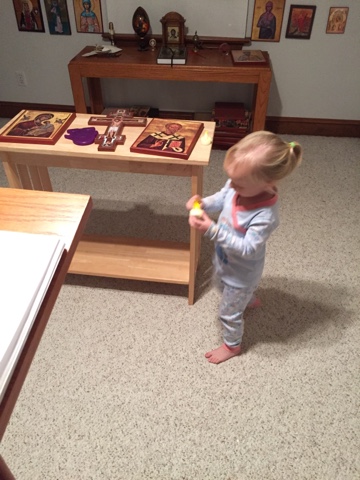 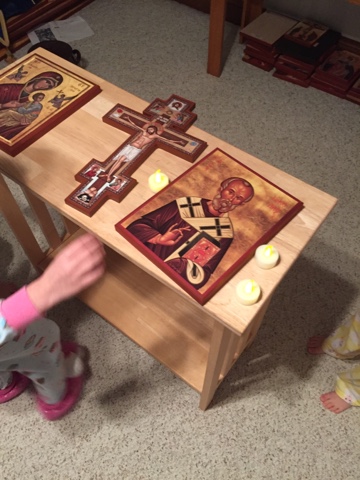 And that's where I'll end since St. Nicholas stopped by the house with some of our favorite things... so more on that later : )
advent adventures traditions