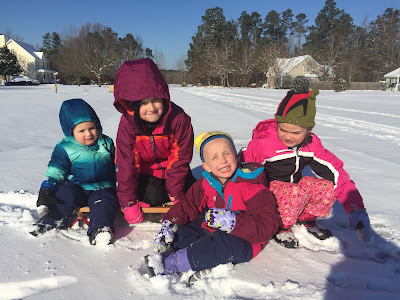 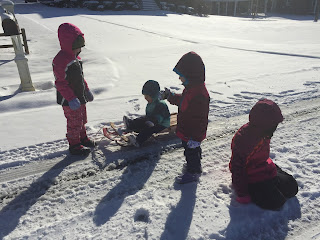 It was a puffy, powdery snow that fell really quickly and stuck almost immediately because it had been so cold. 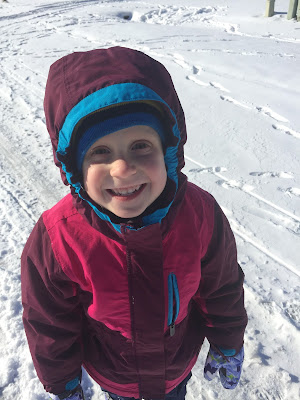 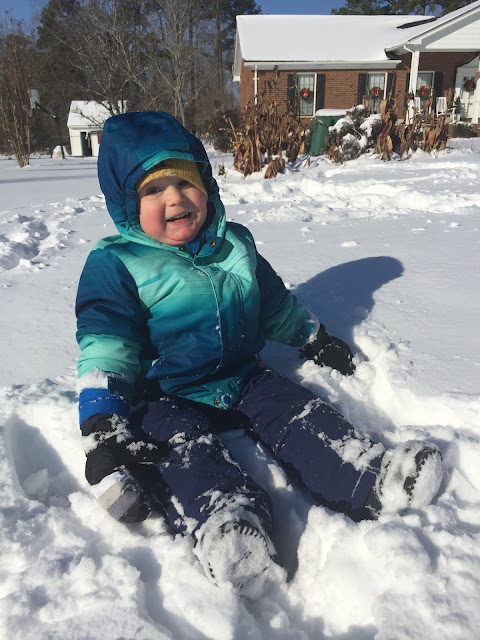 This guy was in his element. Outside with an unlimited food source at his finger tips - and warm finger tips. On Monday I ordered him snow mittens because the snow wouldn't be here until Thursday. Well Amazon let us down and the gloves did not get here on Wednesday as I expected so when I realized that I placed an emergency call and waterproof mittens from Target arrived via his Fairy Snowmother. It was either that or shlep all the kids into Target with arctic blast apparel, search for mitten and herd everyone out. You know how much fun it is getting kids in and out of carseats and putting coats on and praying the toddler has kept his shoes and socks on and zipping up coats and lugging the infant bucket and all that jazz. Just send Lee right? Wrong. See below. 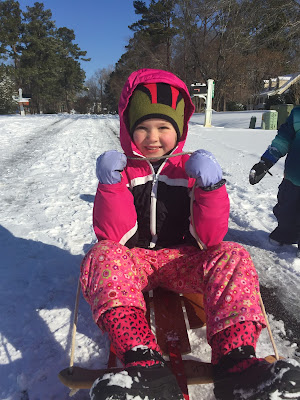 I learned a lesson about those built in mitten things on the coats they got. You have to put the gloves on AFTER the coat. Not before. This is opposite how I did it growing up and I almost lost all my cool the first day before I figured this out. 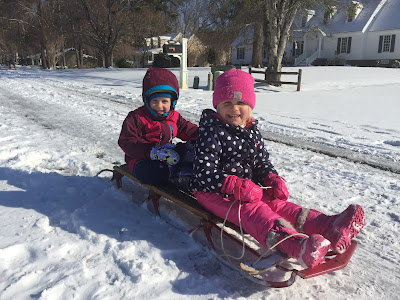 Friends enjoying the snow! This is them last year. 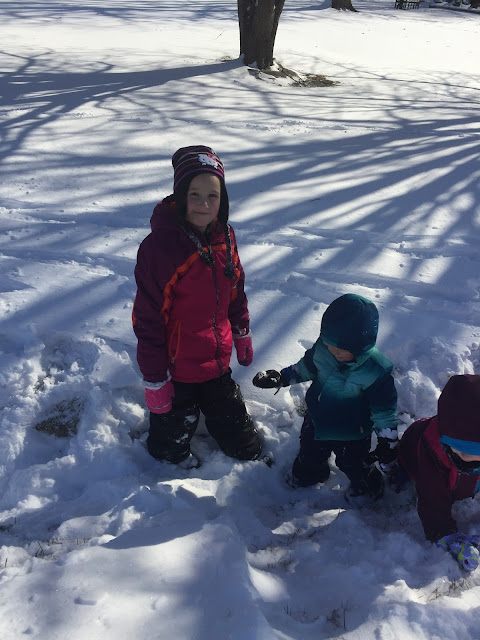 With good sledding kind of out of the picture the kids took to slopes in the yard and rode those. E braved the snow twice on the first day and went to the frozen swamp with the neighbors and had the biggest time. 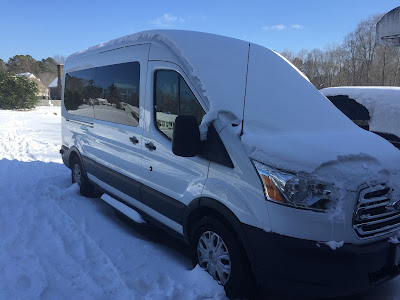 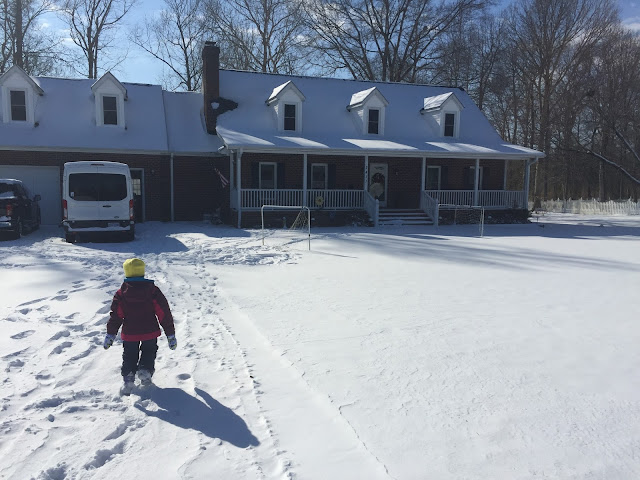 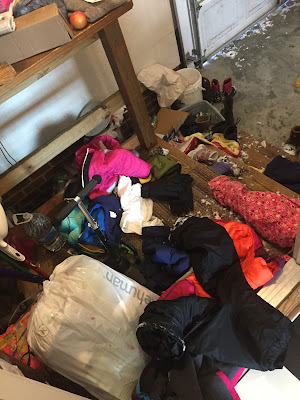 I don't know which is more work getting the kids dressed or getting their stuff dried for the next trip out. 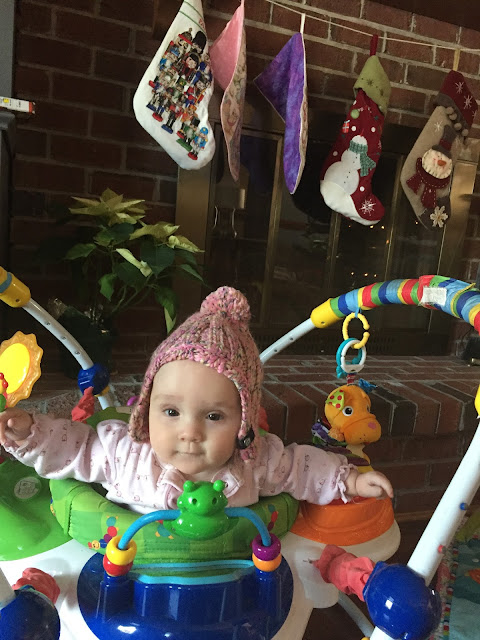 C was put in bed as the big kids were getting ready to go out the first time because I was about to lose it trying to stuff hands in gloves and feet in snow boots. 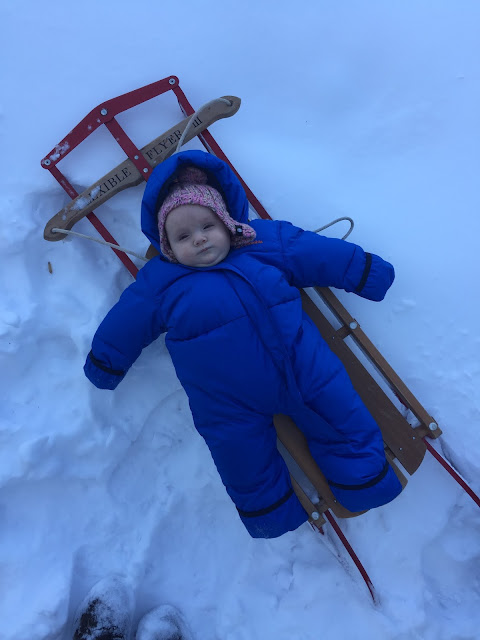 But A and I suited C up and took her out for a ride on the sled. 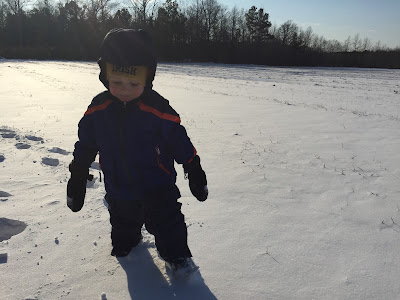 Then we replaced C in the warmth of the house and we set out on our second jaunt in the snow for the day. A was desperate to be out in the snnnnoooo. He would put the softest s on snow it was cute. He's going to miss it the most. 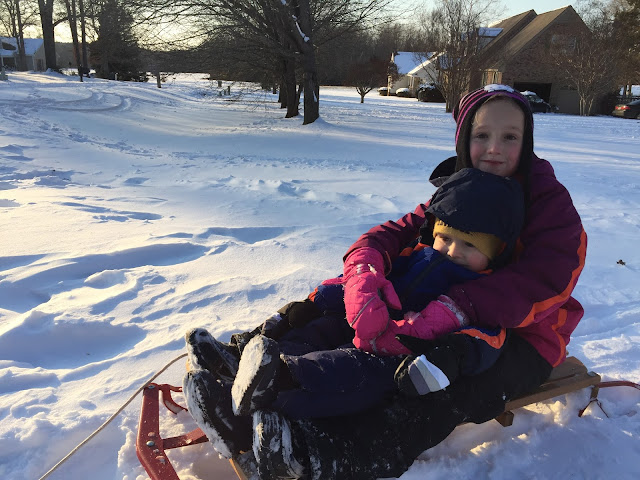 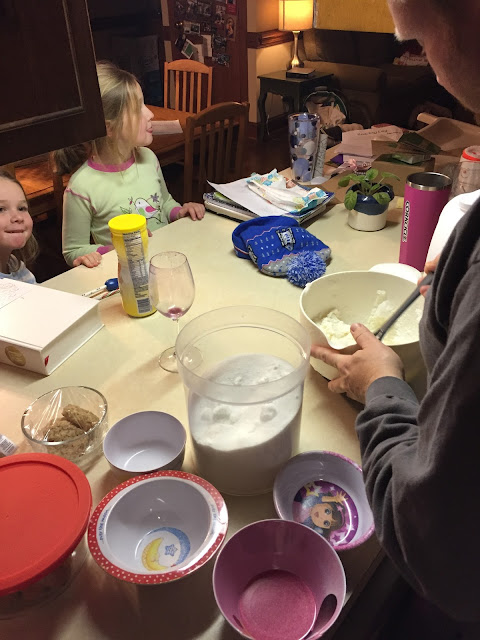 Then it was time for..... Cookies and Snow cream 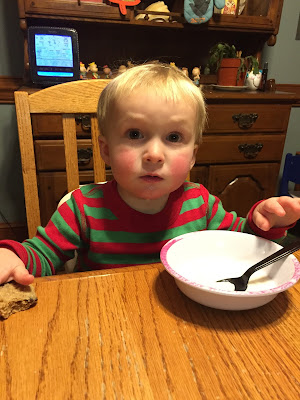 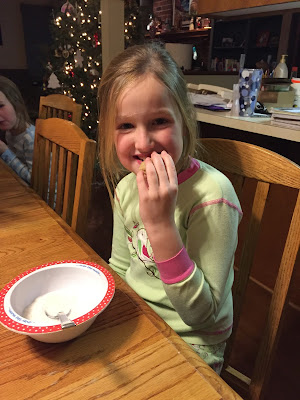 Eating a raisin-free oatmeal cookie Papa made just for her 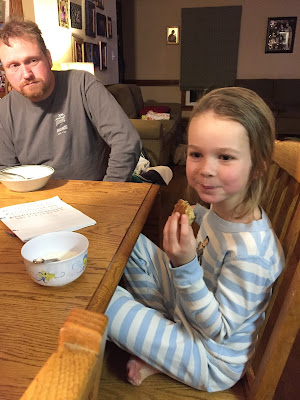 We didn't have a lot of ingredients (as in running low on oatmeal and zero baking soda) so my brilliant neighbor suggested I search baking soda free oatmeal raisin cookies and imagine that, there were a zillion recipes that popped up. 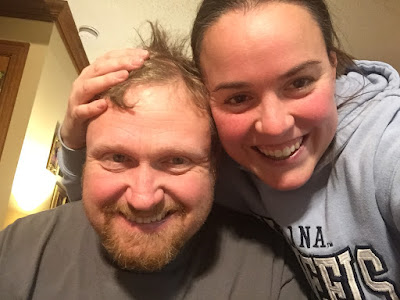 This guy held down the inside fort during the snow. The chef, the baker, the hot chocolate maker. The C watcher. Thursday was supposed to be his day off because Tuesday he poured 20 yards of concrete and 28 on Wednesday - he was a tad bit sore. Honestly I was just glad to have him back home because Wednesday afternoon I wasn't sure he was going to make it back before the roads got bad with snow. He called just after 8 and said he was on his way home. At 9:25 he rolled into the yard and brought the snow with him. 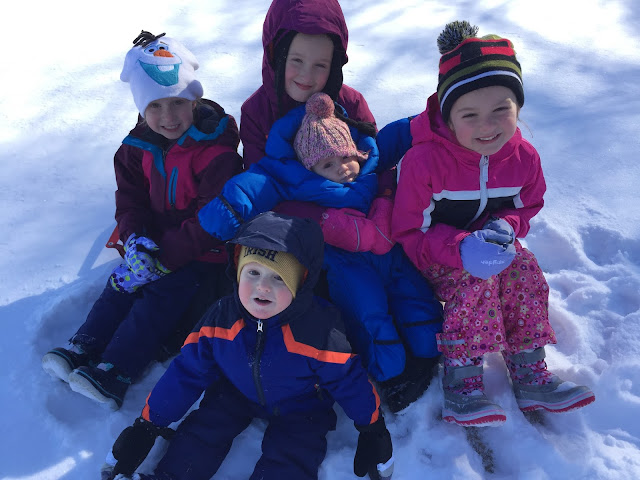 Obligatory all kids in the snow picture 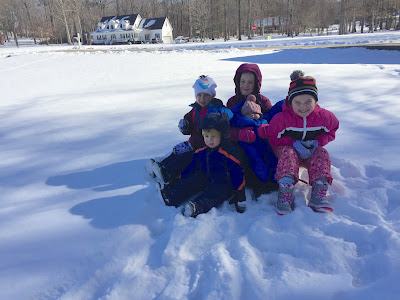 Winter Wonderland - and man was it cold. It was in the single digits most mornings and warmed up to the upper 20s 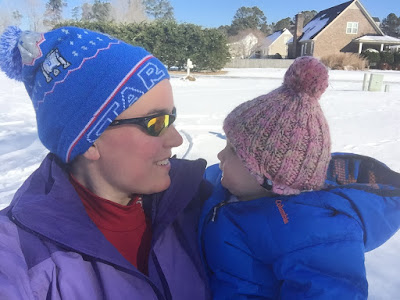 Me and C deep in thought over the snow 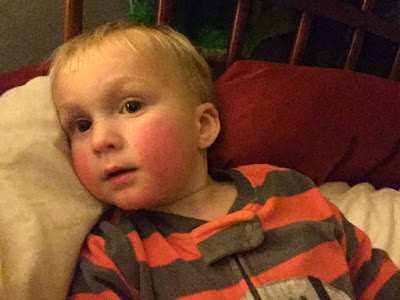 A's rosy cheeks from his snow consuming adventures. I'll post a pic of that later because I took that on Lee's phone.

Friday I had to go to work in the afternoon. The county roads were not great but once I made it to the city they were fine. I picked up dinner and then headed home for in-house Theophany vespers. Saturday everyone was going snow crazy so I convinced Lee we could all use a little time out of the house so he went to the gym while I took the kids swimming and it true fashion they stayed in the pool about double the time it took to get changed into bathing suits. Whatever. We came home to a yummy pot of chili and settled in for some football and a King Cake thanks to some friends who braved the snowy roads. Sunday we made it to the later church service since there is still a good amount of snowy ice on out neighborhood hill (not the sledding one). After church they (not me) went out for one last play in the snow. Lee and I had a peaceful hour or so that involved cleaning up more Christmas presents (yes they are now finally put away), folding laundry and watching football. I told them whoever stayed out the longest would get the most snow cream so they were huddled in the garage waiting each other out but finally they all came in at the same time when hot chocolate was served.

With a two hour delay today I imagine our snow days are over for this round. We'll see if we end up with more. We're supposed to hit the mid 60s toward the end of the week so we'll see if that holds true.
at January 08, 2018