Linking up with Kelly ... post China, much turkey edition

So I made it back from China without much ado... though there was a medical emergency on the flight from Detroit back to RDU and I am pretty sure that the would have been diverted had there not been a doctor and a nurse on board. I hope Delta gives those medical professionals a free flight if they have to step in and help like that. Anyhow.... Saturday Lee took E and R to a swim meet early Saturday morning. E swam the 100 fly and didn't DQ which was the goal - not her time. R did well and she DQed in breast and IM - not surprisingly but it was her second meet ever and she's really only been swimming for about a month.

Saturday evening we did our week one Advent activity - Operation Christmas Child in an exhausted state but it had to be done. 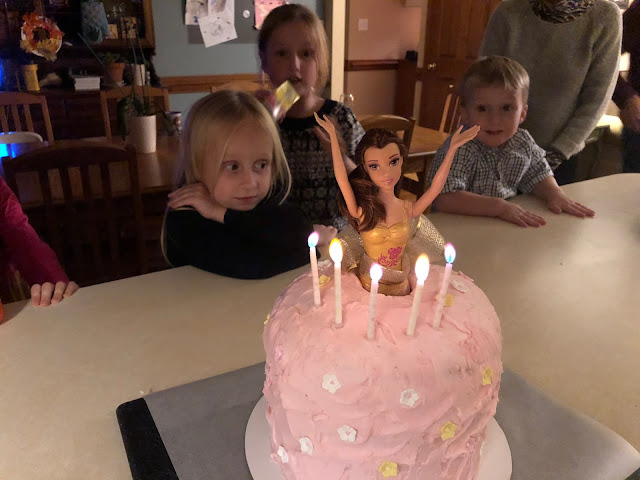 This is the cake that my mom worked tirelessly on and then sat in the freezer for 2 weeks but it was still yummy. 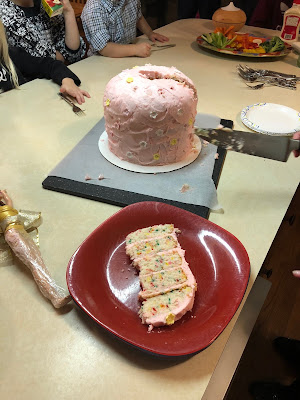 Monday kicked off the (seemingly) endless Thanksgiving celebrations at school - so I am thankful for all the kids that we have been so generously blessed with to be able to celebrate Thanksgiving with them. I am thankful for both their sweet little schools and their amazingly great and dedicated teachers (and staff) who make the schools go round. And I'm thankful for my jobs that allow me the time and the space to shoot off to the parties mid-work day and go and come as I need to enjoy these special moments with the kids. 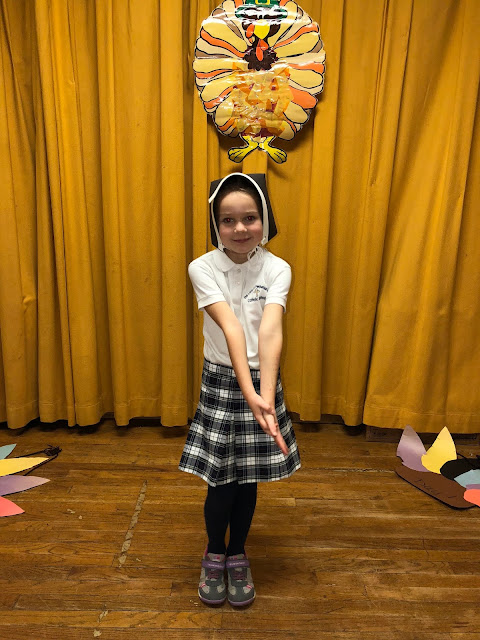 First up was R and her Thanksgiving play - there were a few cute songs and I've caught R singing them to herself over the long weekend. I really enjoy this celebration because the kids write notes to their families inviting them so it is a nice time to see all the parents in the class and catch up because sometime life can get so busy. The meal was coordinated and easy for parents and a hit with kids and adults. 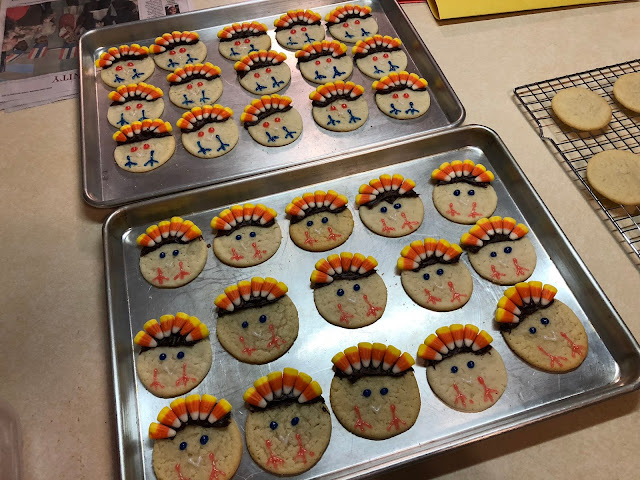 which only means one thing. Turkey cookies. I think I've owned turkey cookies since E was in the same class that A is in now - though I had to put my turkey game face on when I couldn't find the pre-made, pre-cut turkey cookies - and honestly I'm kind of glad because this is one thing I think I've got down to a science in the cute/crafty/cooking department. 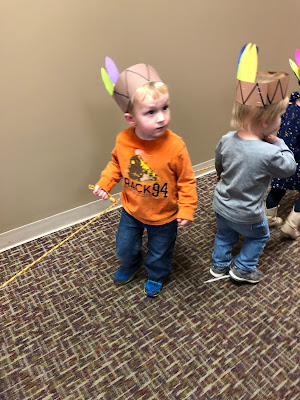 I spotted a 2 yr old parade going on and look who I found! 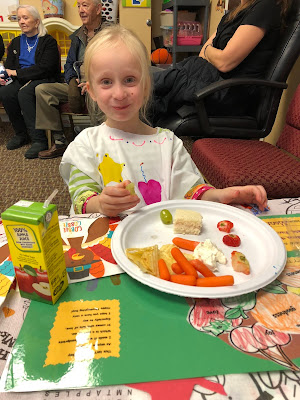 I usually make a point and don't go to a number of the class parties unless I'm in charge of it or I know that it is really important (because honestly, I can watch my kids eat food at home) BUT I knew M had to make a little presentation so Thanksgiving parties all around this year. 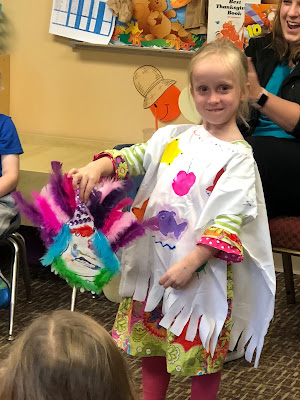 M presenting her "Wild Turkey" to her class 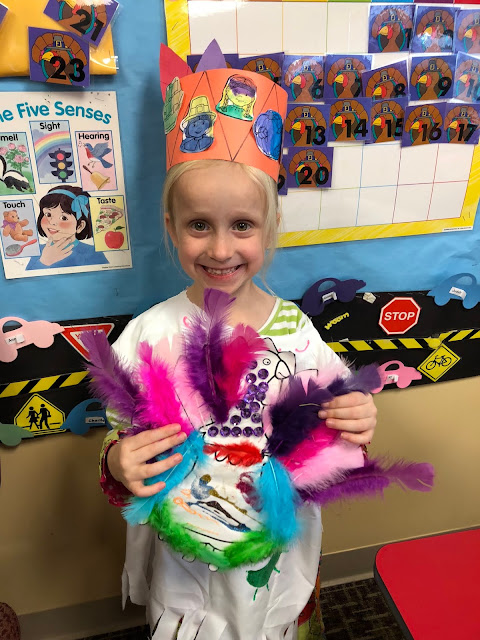 She and I whipped up the Wild Turkey the day before I left for China because Lee probably would never let me leave again had I left him with an art project to do. Glitter glue, feathers, jewels - thankful for a hot glue gun and all the little gun sticks to go in it.

Then after a quick lunch break it was off to the races for E's class party which turkey cookies were requested so.... 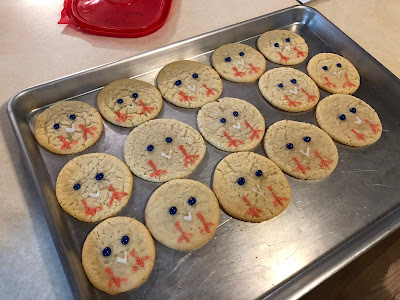 I made it a bit more interesting for the 3rd graders by giving them naked turkeys that they had to put the feather on. I think they liked it : ) 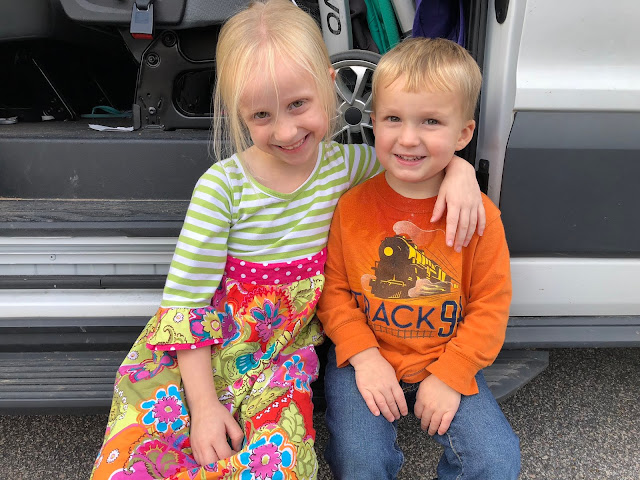 They asked for a picture 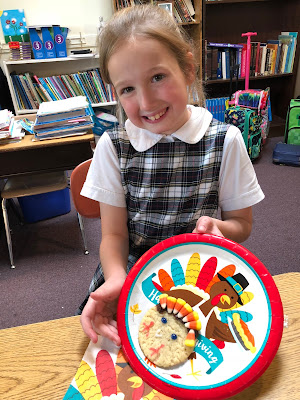 And last but not least was A! 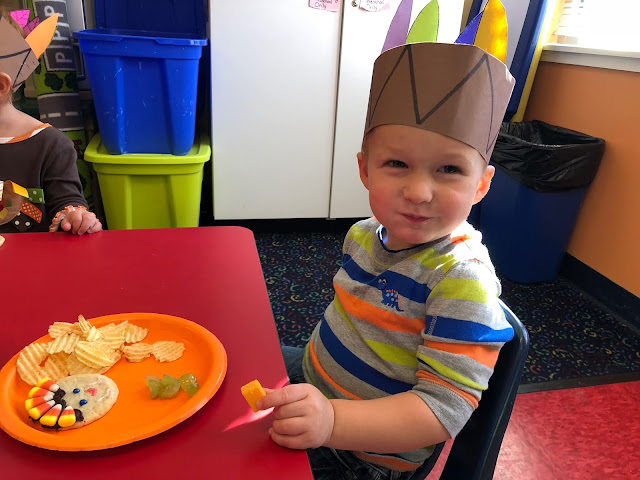 and the final round of turkey cookies. I did enjoy sitting next to him while he feasted on his snack.
---6---

Then it was onward and upward to our Thanksgiving Thursday... 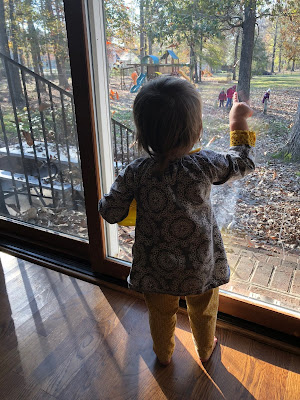 C disappointed when she realized she couldn't go outside and play in the massive leave pile with the other kids. 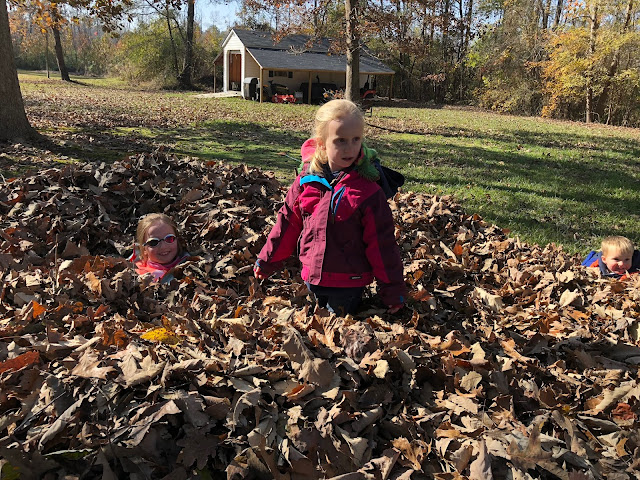 This picture really doesn't do the leave pile justice or Uncle Kev who made it happen. Lee and Grammy worked in the kitchen while Uncle Kev worked on blowing the leave to entertain the kids. 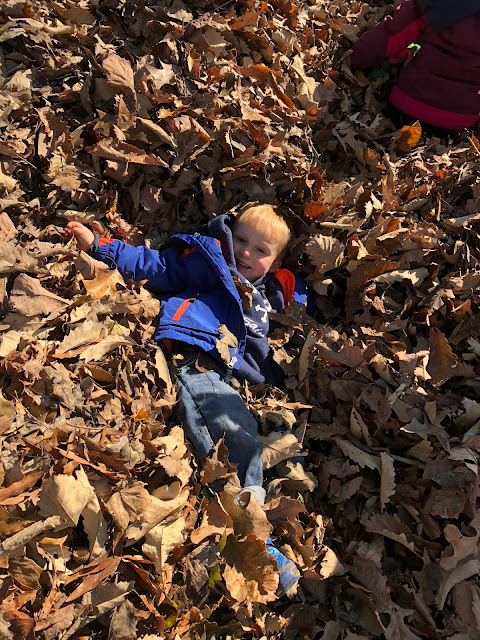 A winter hat and shoe were lost to the leave pile and we are hoping they'll surface before Lee takes a flame to them.

On this day we are Thankful for our family and friends who descended on our house. Thankful for fun times and good food and great company. I'm especially thankful for a husband who loves to cook - because if I had to cook a turkey for Thanksgiving that would not be nearly has fun as just having to eat it. 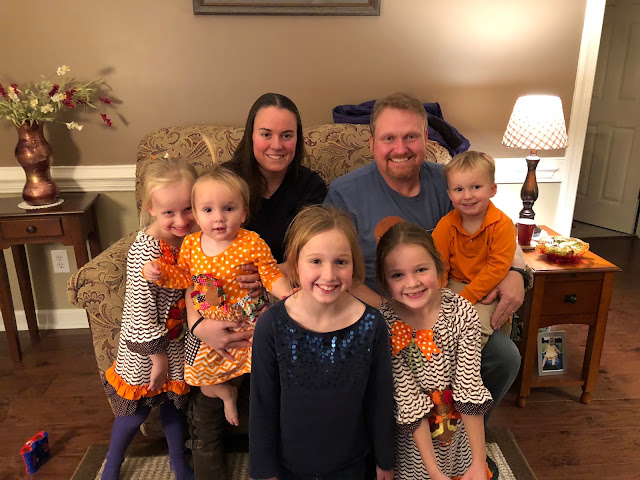 This time it was off to Jibbe's house. On this day we are thankful for Jibbe who has been letting us have Thanksgiving on the Friday for a while now. Which means that out families can enjoy one Thanksgiving meal two days in a row rather than stuffing ourselves with two Thanksgiving meal in eight hours. Friday was a great day filled with more great food and friends and fun times especially with cousins.
at November 24, 2018