Linking up with Kelly ... a reckoning for a time marked by sickness and a whole lotta busy

Where to begin? There's been so much going on and so many times I have wanted to sit down and knock out a blog post on it all but then something else pops up so I'll just start with March 1 and we'll go from there. 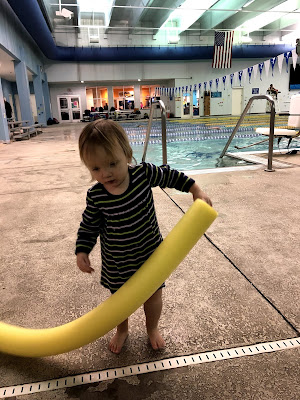 On March 1st about 10:30 am Lee called me to tell me he wasn't feeling good and he was going to bed. Not a major deal except for the fact I've never known him to do that. Then it dawned on me, he should probably get tested for the flu and after failed attempts to call him (he was sleeping) I storm in at 12:45 for lunch and announce he must go to immediate care. He says he doesn't want to. I told him all the more reason to go and he finds his way out of the house. By 3 he's got a positive flu test and a prescription for Tamiflu. Again, not a huge deal except for the fact everyone in the house might get it AND I'm leaving for China in 36 hours. 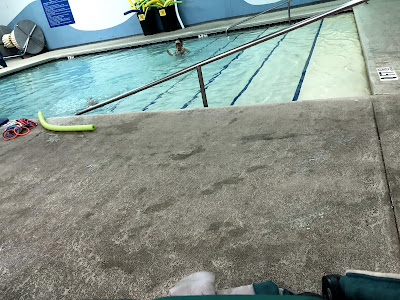 I load up the troops and make a quick exit to avoid any further exposure and we head to our normal swim practice and lessons and I have a mountain to ponder over the next several hours. Finally I make the decision to not go to China because I'm sure if I went every single kid would have gotten sick and I couldn't really leave Jibbe with all five kids for five days. Lee would basically be contagious until the day before I was to return home so he was out.

Disappointed but at peace with the decision. 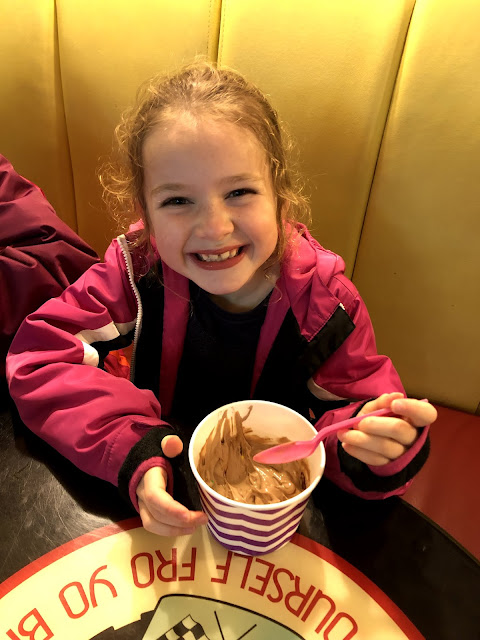 After swim we went for ice cream (before dinner) because someone was celebrating an AR goal met and Lent was upon us and we needed to get it in even if Papa could not join us. 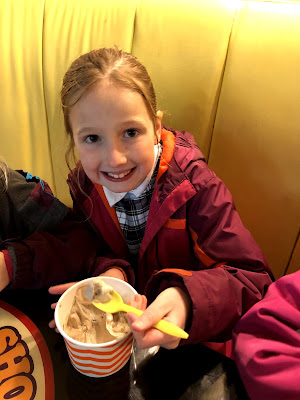 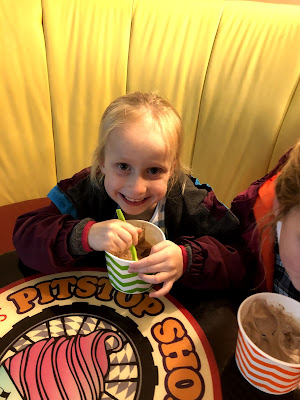 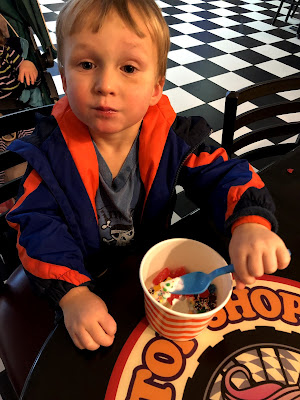 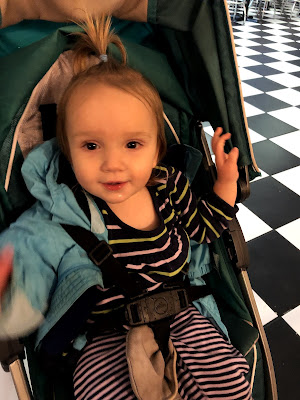 C and I shared which I was really leery about because I was like what if we have the flu?


Before leaving to walk next door (in the rain) for pizza, this guy came up to me and gave me $20 and said he thought I needed it. It was a humbling and strange interaction because I really had no idea how to respond except graciously. I'm trying not to overanalyze the whole exchange and I'm holding out to see when I can pass it on.

We stayed the night a Jibbe's which in the morning turned out to be terrible because C was up before 5:30 and everyone was up before six. I fumigated the house 3 times before bringing everyone back Saturday night - oh and Lee was banished to our bedroom.

That week was interesting to say the least. We still had the normal swim and AHG and school but solo parenting is not for the faint of heart. Plus being nervous about kids getting sick plus arguing your husband back to bed because he's still got the flu but he feels better? 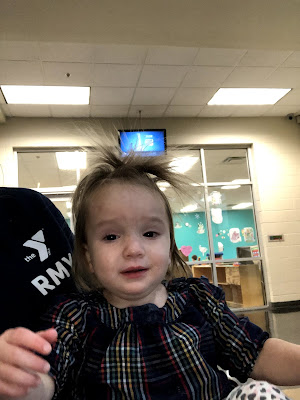 It was Dr Seuss week at school and C showing off her whacky hair when she takes her hairtie out. 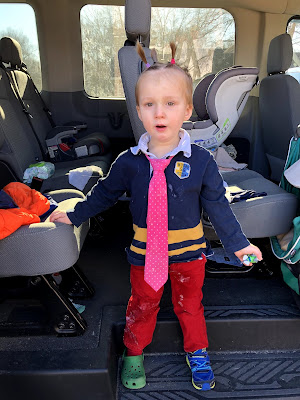 Wednesday was indeed whacky. A was pumped. I did his hair. We made a whacky boy outfit - which I've never had to do before. Then as we are pulling into the parking spot at school he said his tummy hurt and 15 seconds later I knew why. I found a mom to hustle M and her friend into school. I did a driveby with C then A and I shot home. A was banished to the kid bathroom tub with the iPad and Papa manned him from the next room over while I went to work. 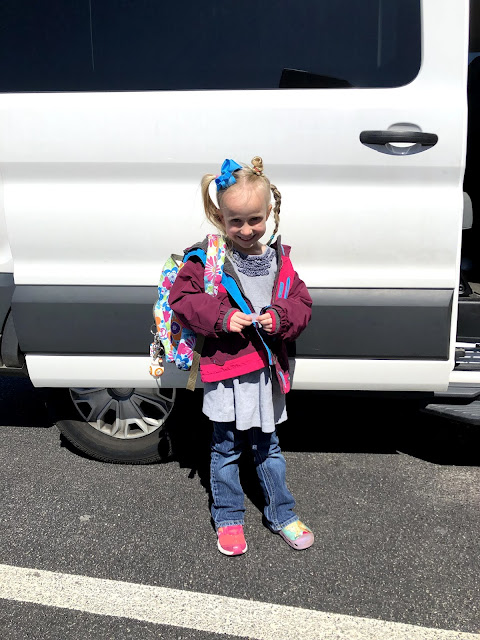 I did get a pic of M's whackiness after school. The van had been thoroughly fumigated and sprayed down and I was glad that I hadn't put A's clean carseat back in the van - it had been thrown up on several weeks before just not by him.

Lee went to get the big girls from school on Wednesday - because he was technically not contagious and he was exhausted - and he THOUGHT he was going to serve at the morning Ash Wednesday masses.... silly Papa

R and M and me went to Presanctified Liturgy that night as C is a loony tune, A was sick and E said she didn't feel good. It was a good reminder Lent had indeed begun whether we were ready or not. And I LOVE Presanctified Liturgy so much even if it crazier now with kids - I hope one day they'll appreciate it as much as I do.

So to recap the sickness, Lee did go back to work Thursday and took it easy. A must have gotten sick one more time because he spent Friday at work with me. Papa did get his energy back to take the girls to the Battleship with AHG that weekend which had been on the calendar since August. While they may have been able to survive without me, I still believe it was the best decision to not go to China - even though I missed out on hotpot - and other things too. I am not 100% sure, but I have a hunch, if I had gone Lee would have been up doing stuff too soon and not consumed copious amounts of elderberry syrup and I don't know that he would have been able to make the battleship trip - which would have been a major letdown for him and the girls  - since they missed a big swim meet to go on that trip. 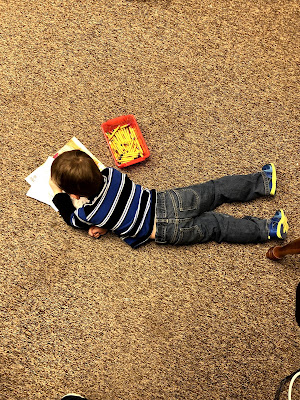 Also, I was so happy to get back into my bed. I couldn't sleep in the room with C because she wakes up and chats in the night so I was on the couch for a week. Friday night I stripped the whole bed and washed everything and it was a glorious sleep - plus the couch was super sunk by the end of the week. I rotated which way I slept and it still was sunken. 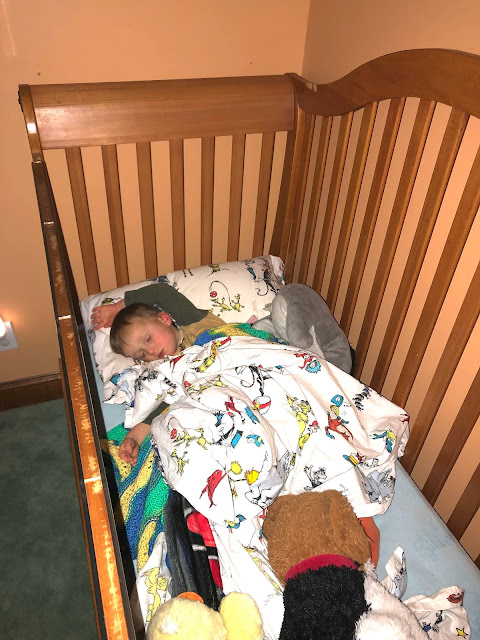 While E and R and Papa were on the battleship trip, A put himself in his (old) crib for a nap. He and I were warring about him laying down for rest and finally he stopped coming out but this is how I found him. 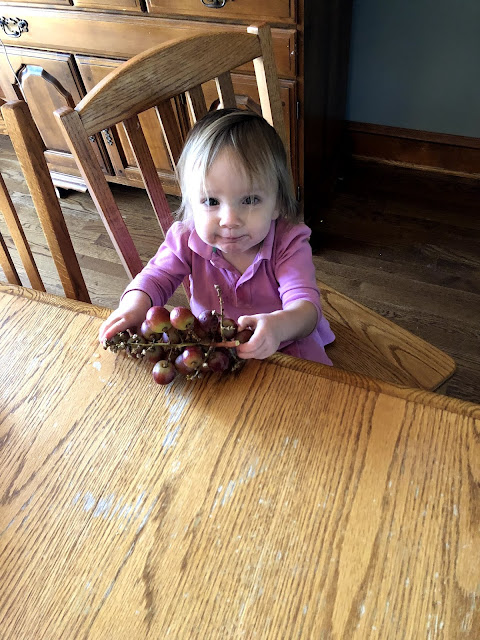 C helping herself to grapes before Presanctified the second week of Lent - when we all went together. She was very pleased with herself. 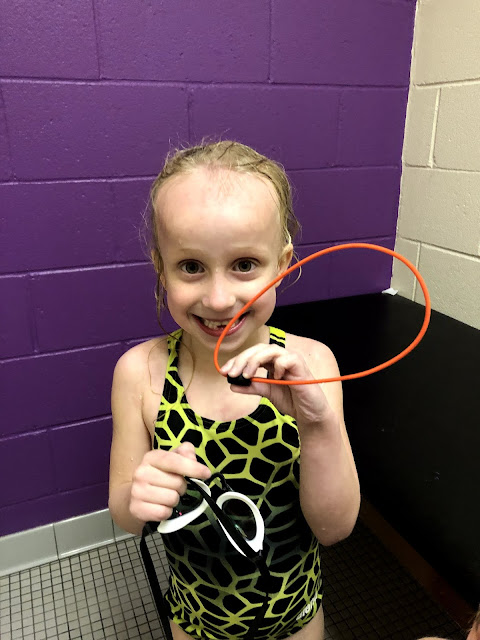 M passed the swim test at the Y last Friday! That gained her lots of confidence and access to the waterslide - which she took advantage of this week. She is quite determined to swim in lane one on the swim team and if she can get a lap of backstroke in she'll be able to! Also, she's lost not one but two teeth and that hurts my mama heart to the core. 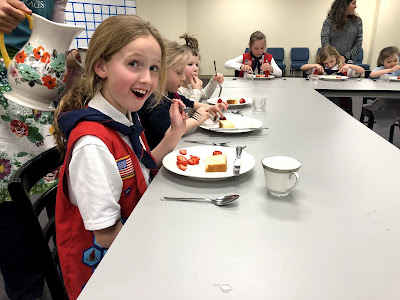 The girls had etiquette class at AHG. They had pound cake and strawberries for dessert to practice using their placesettings. I found this hilarious because A. we gave up desserts for Lent (but of course we wouldn't refuse it if it were served because we fast in secret, right?) and B. there were strawberries and E claims she hates strawberries. They talked in class about eating what you are served and being gracious and trying food even if you don't like it. She ate every single strawberry : ) 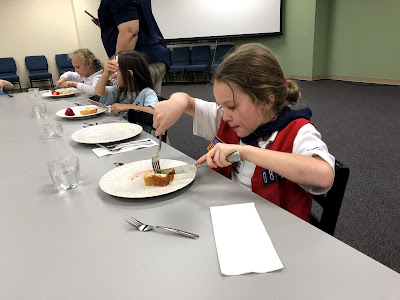 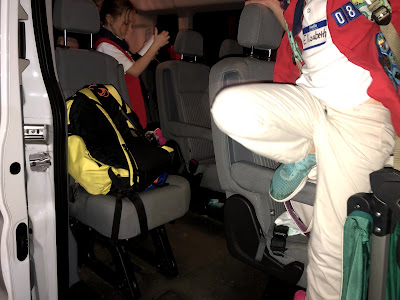 This picture doesn't do the evening justice because there was swim practice, soccer evaluations - which we stayed at for 15 minutes, then AHG. That's a whole lot of costume changes.

This week proved to be just as action packed as the previous two...

Monday was soccer for everyone, except C, which was freezing and windy and Bible Study for Papa. Lee dropped C off at the field as well as dinner for us so he could go to church and everyone ate in between practice. I left E and R at their practice and went home and shower M, A and C. It was late and C was tired and acting a bit out of sorts but we reloaded and picked up E and R and walked in the door just after 8 only to have C get sick just after cross the threshold of the laundry room door. It was actually not a terrible place for her to get sick because in her carseat or in the crib would have meant stripping sheets or padding. I just herded everyone out of the laundry room sent them to brush teeth, to pray and to go to bed or do homework and I dealt with C and the mess. Big kids are great! I scrubbed the floor and the doors and good as new. 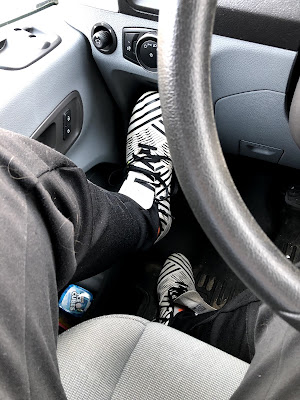 The next day I had to wash my new (and only pair of) running shoes as they were victims of the night before so soccer cleats it was. 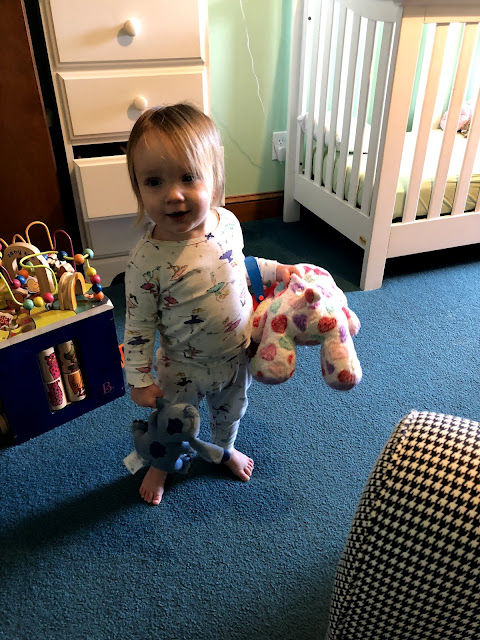 C was fine after that but we laid low for the day and she was mad at me for not giving her milk.


Last but certainly not least, a pleasant surprise for the week... 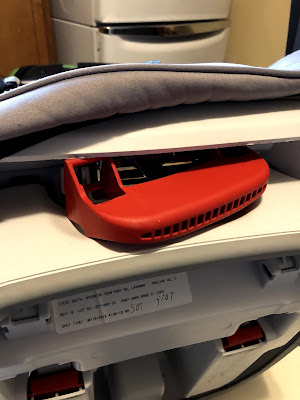 I finally was ready to put A's carseat back in and this red lever that adjusts the recline of the seat broke off - it had broke off before and Lee fixed it but this time it was no fixing to it. I finally contacted Britax about what I could do. Want to know what they did?

Sent us a whole new carseat.

I was shocked. Shocked. I think we had had the seat for about 2 years but no receipt needed. No explanation as to why/how it happened just a new seat and instructions for proper disposal of the old carseat. I'm still surprised and need to get rid of the old one.
at March 23, 2019