Here's to the latest and greatest school year... 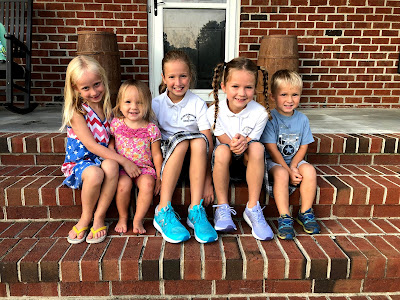 The first of the first days started for E and R. Breakfast of choice was banana chocolate chip muffins which went off without a hitch. E declared that she didn't want anything special for breakfast but that's not how we roll around here. 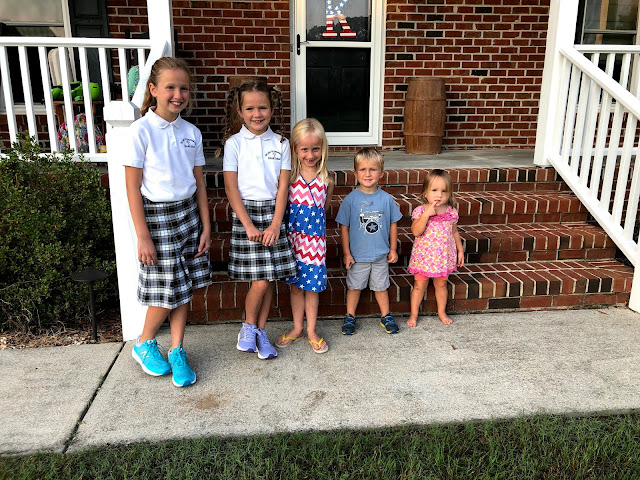 This is the first time we attempted an age order group pic and C wasn't being super cooperative but we got one somehow! 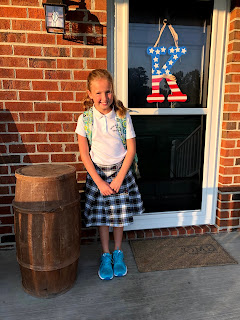 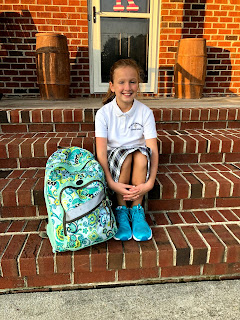 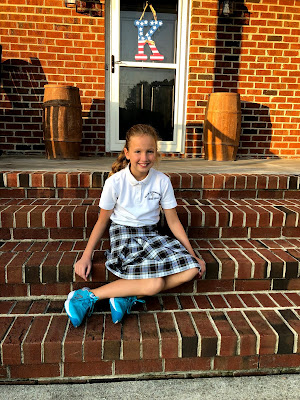 I see lots of books in the future for this year 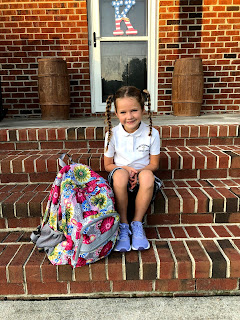 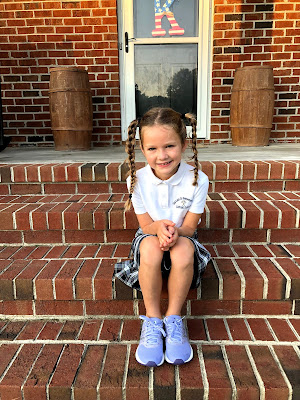 Cursive and lots of math facts will fill her year. We've already been impressed by R's penmanship in the first two weeks of school! 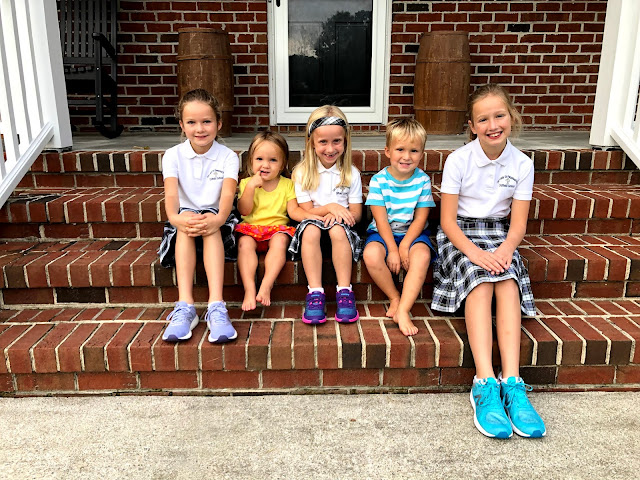 The second first day. M had orientation two days after her big sisters started. It was first-day-ish but really was only an hour. Breakfast of choice was cinnamon rolls which older sisters may have had a hand in that. 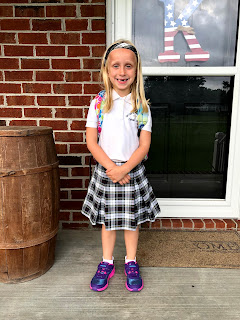 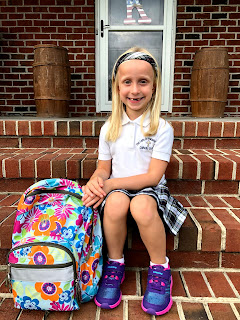 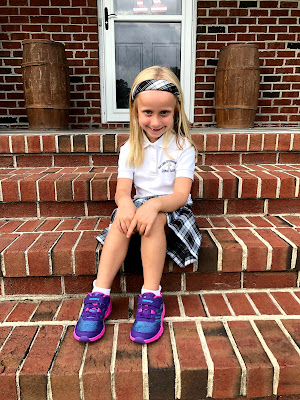 Kindergarten is usually a cause for a pause because it means I lose my lunch and afternoons with whoever is going into K. I'm sad to lose that time with M but there is one person who misses her more and that is A. He has asked where she is on several occasions and for someone who doesn't like playing with C - he has got some getting used to. In the first two weeks, K will definitely be an adjustment for M on tons of levels, new school, new friends, new routine and I think she's picked up on what I have come to find - Kinder isn't fun and games and centers and playing. It is not the school. It is not the teacher. It is the curriculum in our diocese and state. It is not the Kindergarten I went to. Anyhow, I digress. She comes home pretty exhausted but I did see a spark of old M on the soccer field the other night which made me happy. This year will be filled with not losing any teeth because I think she got all that out of the way before school started, except for the one super loose one that got knocked out at a birthday party the weekend after the first week - that story is for another time and place but nothing like first impressions and profusely bleeding within 15 minutes of coming to a b-day party. 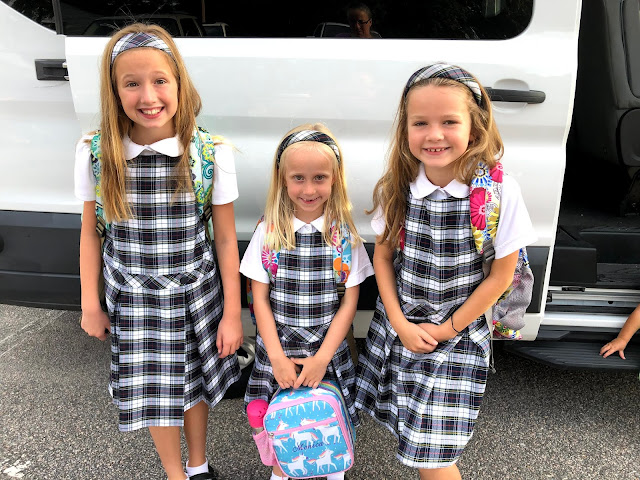 Yes they have to wear their hair down. Yes they can put it up after Mass. Yes it is a weekly debate. No I'm not interested in opinions or if anyone else does it or not. If you don't like it, and your friends don't do it... maybe their family will take you in. Probably only my mother can truly appreciate my insistence on this issue because I was a skirt-hating, ponytail-wearing girl basically my entire childhood. 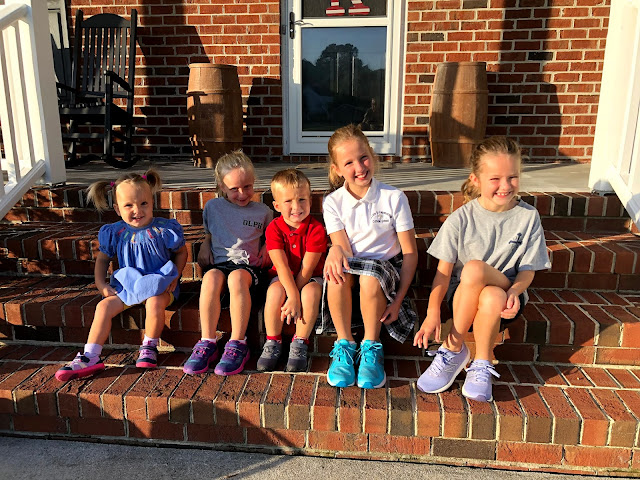 The last first day because we really needed three. A (and C kinda) decided on pancakes. Lee made the batter and dug the griddle out of the garage - which I did not spray before cooking the first round of pancakes. That morning almost killed us getting out the door but we made it. Nothing like coming home to lunch only to be met by the disaster left by breakfast 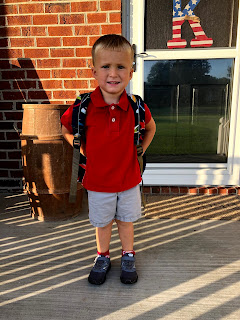 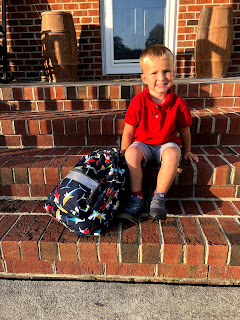 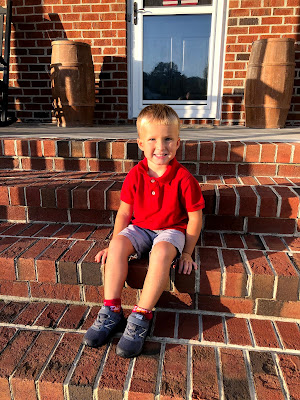 Oh the 3s. A is going to have such a fun year especially because M has given him the full lo down on his class and teachers. If he makes it to the stage for the Christmas and spring programs this year, I will be thrilled 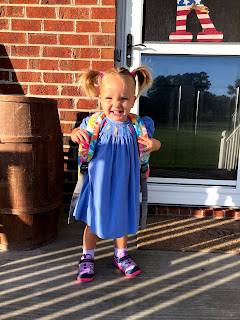 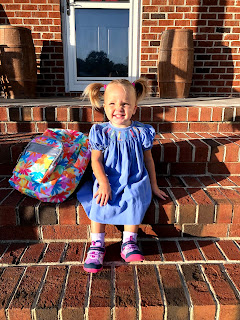 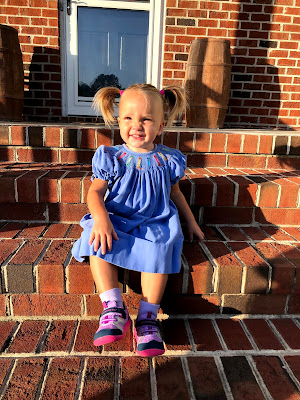 I think C might be a bit excited about her elevated status to preschooler. She has new shoes and a bookbag to prove it. She walked around the house the week before preschool started saying "I cute, I'm cute, I'm cute" She walked into her class the first day and didn't look back but every day since has been a bit tearful and I'm hoping that will get ironed out before she officially becomes a big sister. She's the youngest 2 we've had (hi June bday) but she is quite talkative even though sometimes it is babble - more often than not she is definitely making a point and it is pretty understandable. 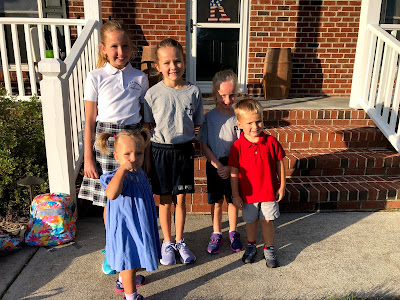 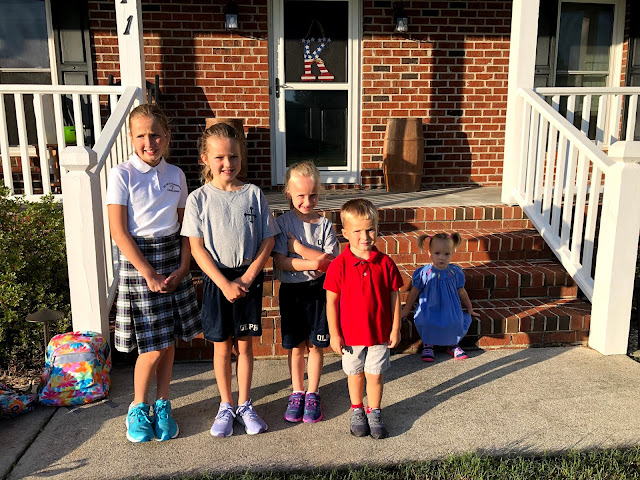 Almost got it but C wasn't have it 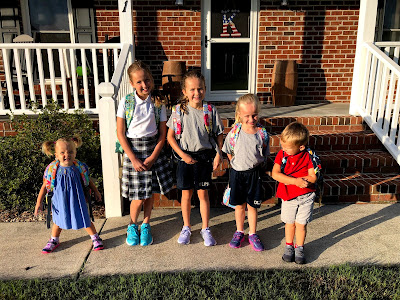 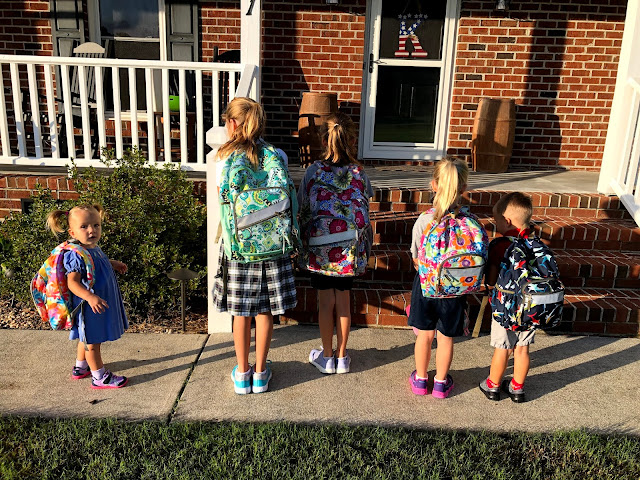