Linking up with Kelly ... reversing it from St. Nicholas to Thanksgiving 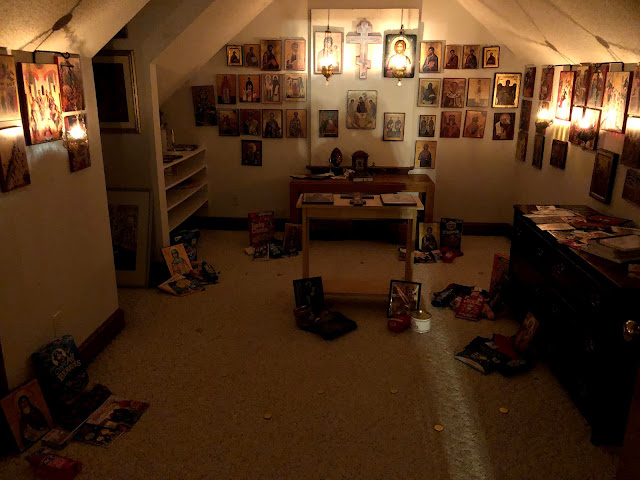 E and I got home late last night (see next) and I nearly forgot about having to set things up for St. Nicholas' visit. The stuff the kids had sorted out for him to take had been in the chapel for at least a week. 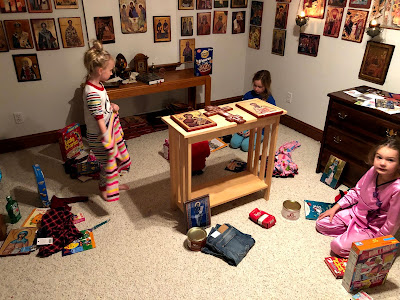 He did not disappoint with Christmas outfits, pajamas, sugary cereals, books, ACT and bandaids. A and C played store with the ACT and bandaids before school. I absolutely love that this family tradition and I have to dig through the closet to remember what I've gotten throughout the year. We only give the kids one thing on Christmas so this is very exciting for them.

Last night I got to hear E's choir rehearse for their concert tonight... 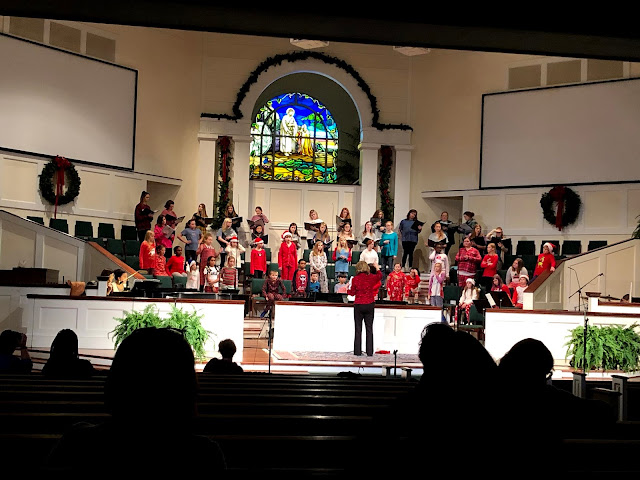 I had to stay for the rehearsal because Js 2 month appt turned into a joint appt for M who had 1. the crud, 2. swimmers ear & 3. strep but PRAISE THE LORD not the flu. Huge praise up in here. So I knew it would be risky bringing her to the concert late at night when sick (as planned) even though she wouldn't be contagious. Well as it turns out, A appears to have strep also as of this afternoon late sooooo... here I am typing out my QTs and wishing the concert was live streamed. It was surely going to be amazing.

I would be a complete liar if I made it sound like I was at all of the 4 hr rehearsal because J and I weren't. I had made dinner plans earlier in the week and I knew if I broke those we would probably not connect again until Easter. Can I tell you how good and refreshing and fun it was just to sit and chat all things, kids, life, school, lice (gasp!), extra curriculars with a few moms I've known since E was in preschool (ancient history, I know).

SO GOOD.
SO NEEDED.

We probably won't do it again because between the three of us there's double digit number of kids BUT... when we do we'll just pick up where we left off. 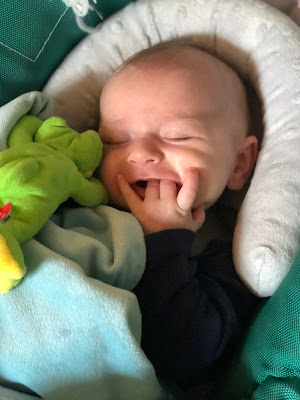 Baby J is 2 months old! He's slept 6+ hours at night which is glorious. He's had his tongue tie lasered which has made all the difference in the world nursing. He loves to talk to me when he gets some one-on-one time. His smells and noises are oh so very boy and sometimes I still can't believe he's here.

M doing planks for swim and A supervising 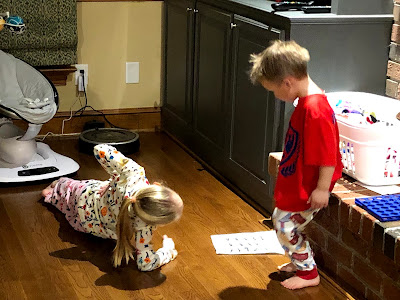 These two people will be tonsil-less three weeks from today. Or at least have significantly smaller ones. I think the end of year and Christmas is forcing me to block out how nervous I am about two kids getting their tonsils out back-to-back but they have each other and it may be a rough few days but I think when they are 18 they'll thank me. 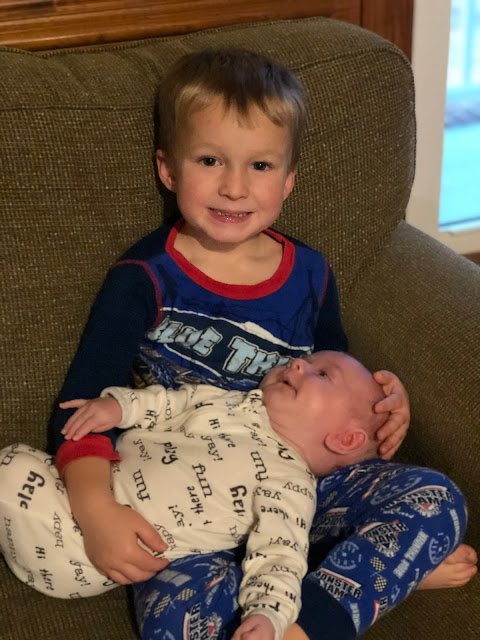 A has been desperate to do things with J like play with him and talk with him. It is funny and cute and I can only imagine them in two years raking and mowing and burning leaves which are all things on A's to do list this weekend.

The Highway Patrol horses were at preschool one day at pick up: 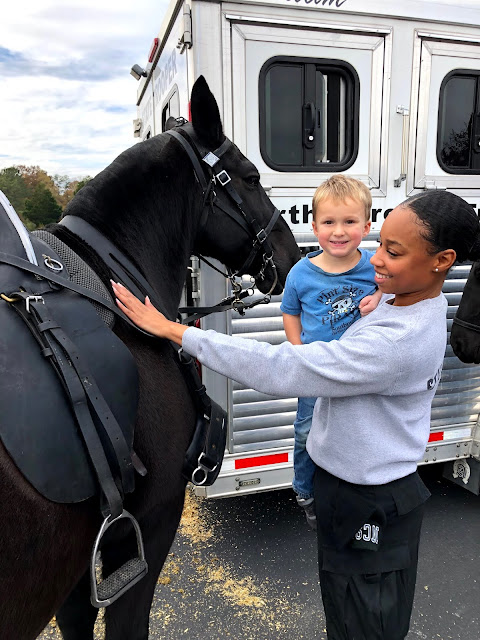 Unfortunately they were there for an officer's funeral 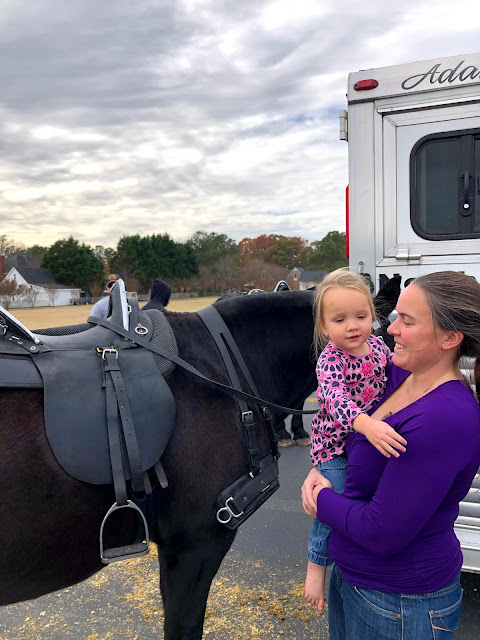 A and C could not get enough of them saddling up and finally one of the officers asked if they wanted to get out of our van and get close. C was thrilled until she was right there.


Thanksgiving seems like weeks ago even though it wasn't. This past week I kept telling Lee and everyone okay we just need to get to Sunday without an issues. Rehearsals, swim practices, work meetings, birthdays, and the concert were all on the radar. M getting sick put a kink in things but E and R did not succumb to anything yet so that is great. 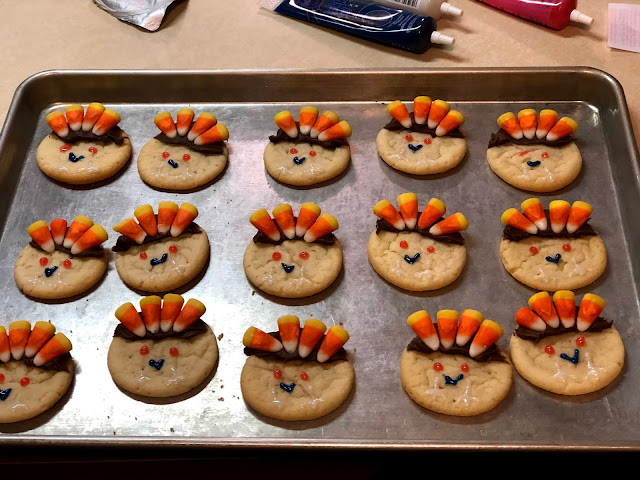 I only made turkey cookies for one class this year. Still a Thanksgiving favorite of mine because it is a cute crafty-ish thing I can do well - if I may say so myself. 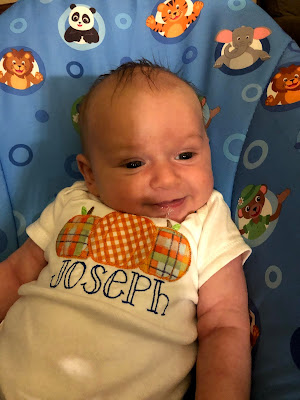 J with his pumpkins 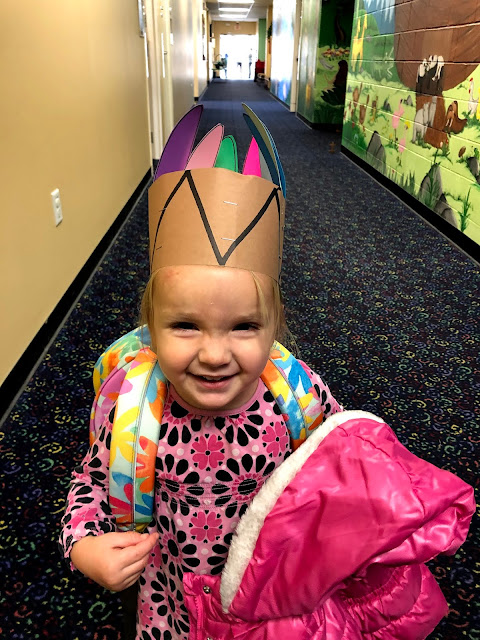 C in her hat from school 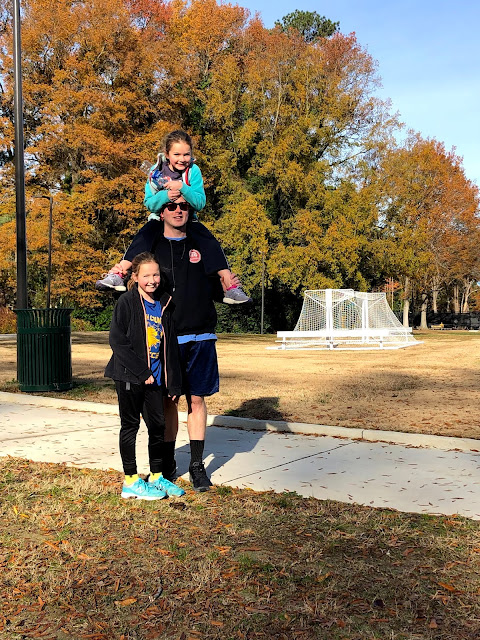 So we may have a new tradition on our hands... I found this 5k in the next town over and Uncle Kev and Nicole and E and R were game. Lee gave his blessing to let me take half of the kids out of the house while he cooked up a storm for the afternoon. 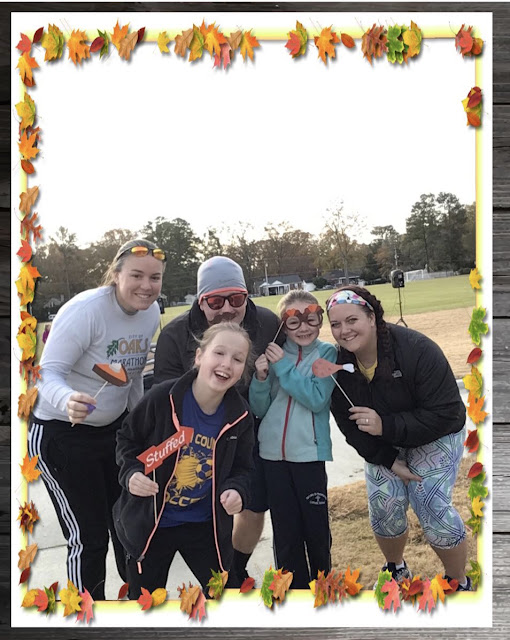 Nicole and J and I power walked the whole thing and caught up on all things wedding and life. E took off and ran on her own which was fine by me. R left the walking crowd less than half way through and her street sense made me more than a bit nervous but we did find her at the end - and she was fine. Uncle Kev started with the walkers and then did not want to lose to a niece so she caught up with E and R and controversy remains about the finish and involves a turkey blocking his way : ) 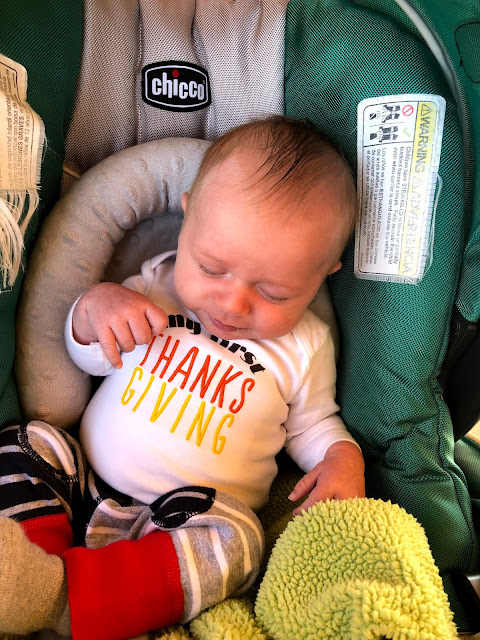