Two for One Tonsillectomy

So we heard they were doing tonsillectomies on BOGO as after Christmas sale so we bit the bullet and signed up for Double the Fun with M and A getting their tonsils out on the same day. And if by BOGO I mean that I'm a total liar and by Double the Fun well that's only with the Bubblemint gum. 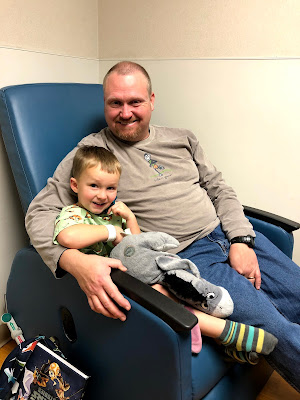 This guy has/had a major drooling issue at the ripe old age of 4 so his tonsils got nixed in the hopes that would help (in addition to them being large as per the ENT) plus his future wife might thank me in 30 years. 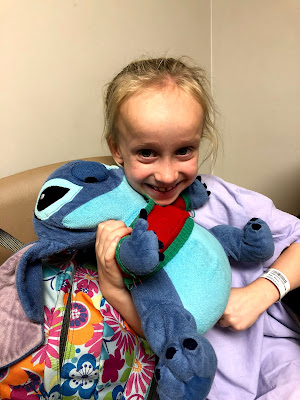 This girl sounded terrible at night sleeping in Costa Rica and I already knew something was up when her preschool teacher brought it to my attention that she might have enormous tonsils (and she did and I will spare the graphics).

So we finally got in with a nurse in the ENT office because we only had one ENT for a really long time and she was always super busy so the nurse could recommend surgery - which she obviously did. We were originally scheduled for 9/13 which was a hot minute from when I was due with J plus it was the middle of the first month of school and soccer season and who wants to miss out on school and soccer?!?!?!?!

So that date got the super nix-a-tion and we settled on two days after Christmas. Not the most ideal time but there'd be a whole week off from school for break. Christmas fun would have been had and Papa would for sure have little to no work to do so caring for two patients plus a new-ish baby seemed reasonable.

In the days and weeks leading up to the surgery I probably asked myself a hundred times if this was the right thing especially after hearing just how expensive this whole thing would be. The surgeons fee is about half of the OB fee for baby J's delivery and the facility fee was nearly the same - PER KID. I have no idea how much anesthesia is going to bill but you can bet it ain't cheap. Plus the kids were getting nervous but we tried to focus on the milkshake after and not think about it too too much.

There was much angst and anticipation and singing and dancing waiting for the surgery. We had to be at the hospital at 6:30 the morning of and the kids couldn't eat anything - which we wisely failed to mention that. C camped out at Grammy and Grandpa Joes for a few days because her HIGH energy state of 2 yr old being was too much for recovery. E and R stayed with Jibbe and J stayed with at the hospital since he's still not a bottling baby.

A got taken back first since they schedule surgeries by age. He courageously walked back with the nurse - they won't let moms and dads past the double doors and then we sat and waited with M. About a hour and a half later as A was getting wheeled back out - in a super angry state - it was M's turn to go and I think she might have opted for the wagon ride back but she probably wondered what the HECK was going to happen because A was MAD MAD MAD. 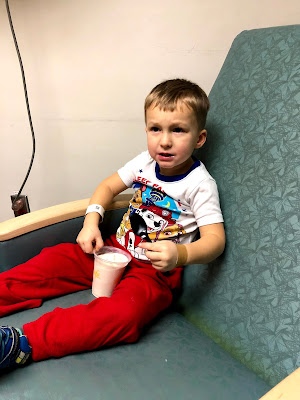 They say every kid comes out of anesthesia differently and A was an agitated one. He realized immediately that he had an IV placed in his arm (they put it in when he was asleep) and he wanted it OUT. The nurse said she'd take it out once he drank his juice which is was MAD that it had ice in it and that was quickly remedied. He started drinking it and probably a bit too fast so we snuggled and he slept a tiny bit more and drank the rest and demanded his IV be taken out. I thought he might pull it out. Then we snuggled more and he was mad Paw Patrol wasn't on so he settled in to watching videos of himself and his siblings on my phone. 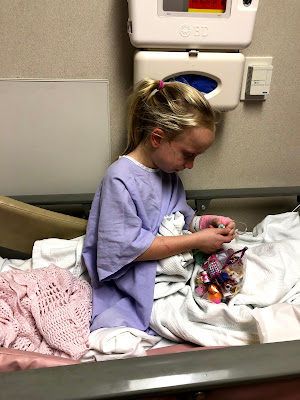 At some point M came back out and I was expecting something similar to A but that didn't happen. She was super groggy and had a few fitful and pitiful conversations. She got her LOLs out and stared blankly at them and laid around and was not bothered by the IV and refused to drink anything. Not long after she she back, Lee and I realized we'd be here for longer than with A so he took A and J to McD's to get us lunch and them milkshakes and to get the prescriptions. Well the prescriptions were at a different pharmacy so that got changed but not in time, so the guys came back with food and we waited on M some more. A only spilled his shake a few time but downed the entire thing and proceeded to inform me that I better not eat all the fries; he finished my fries off 4.5 hours after surgery! M still wasn't drinking anything, J was super tired from all the day's and previous days activities so he was screaming so we did some laps around the atrium and outside. I got back and the nurses were convincing M to drink something. She can be quite stubborn at times.

M finally drank the minimum amount we were off to the races to get home but not without getting the prescriptions from pharmacy number two. The lines were insane - drive thru and in store. The meds had been pulled but not mixed and M's tylenol hadn't been filled because it had a touch of extra strength in it so it had to come from the narcotics safe. It was basically a nightmare and took forever. Should have used a different pharmacy and who the heck are all these people picking up all this medicine?!?!? I got back to the van. A had an emergency potty trip, J was screaming and M was staring blankly into space... 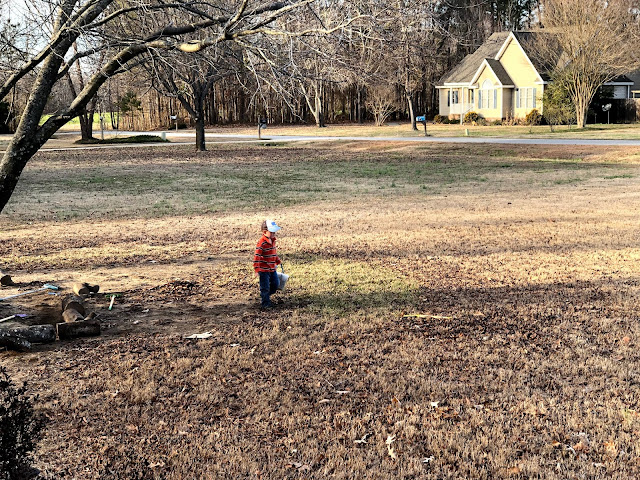 We've survived the first two full days of tonsillectomy recovering pretty well. Lots of iPad time. Lots of bargaining to drink a sip of this and that. Lots of resting. Fighting over which iPad is being used. Yesterday M was still napping and A went outside to his happy place - under the tree. He raked and collected leaves and he tried really hard to remember not to run - because they aren't supposed to do ANY physical activity for two weeks - not that they'd want to this early on anyways. Everyone's been out of sorts but overall it hasn't been too terrible.

We've been setting alarms to give them medicine and waking them (and us) up to do it because misery loves company so I'm hoping when we don't have to do an early AM wake up everyone will be happier because they aren't loving the medicine in the middle of the night but it's got to be better than waking up in pain because their behind on a dose, right?

So here's to the next (few) days of post-tonsillectomy recovery

Email ThisBlogThis!Share to TwitterShare to FacebookShare to Pinterest
Labels: doctors