This year the big school and preschool Christmas programs fell on the same night... again.

Joy to the World
Moms cannot bilocate
But thank goodness for dress rehearsals!

J and I went to the big school dress rehearsal which is probably and will forever be my preference over the actual program because I get a front row seat and I show up 2 minutes before it starts and I don't have little people who belong in bed with me. LOVE a dress rehearsal. It was E's last year in the program - which was sad - but she and her friend sung together and it was cute. R was a narrator who knew about 2.5 lines the week before the program so I was nervous for her but she did GREAT. M was part of the little happy family getting out a nativity set - in the dress rehearsal, it was the most sober, sullen family EVER. That was kind of hilarious.

That night it was onward to the preschool program and if by onward, I mean spiral downhill into the depths of Christmas program hell. 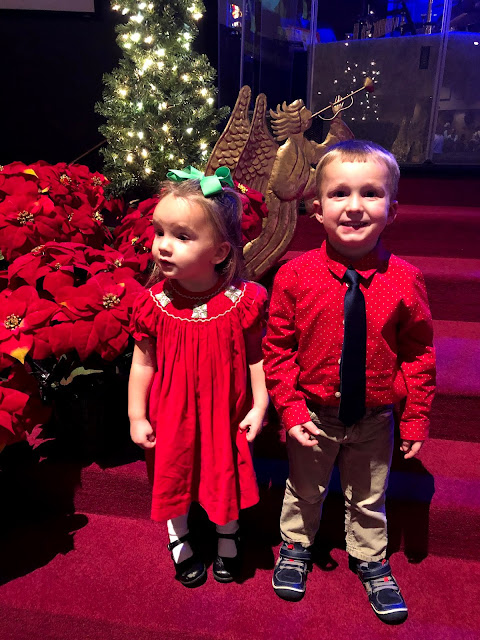 Don't let this cute pic fool you because I was.

It is probably worth mentioning that in the spring A refused to go on stage for the spring concert. I wasn't there because E and R had a soccer game - but I heard the reports. He wouldn't go into his class and kicked and screamed and it was a mess.

He had been talking about his program all month. Singing the songs. Screaming the bible verse. He was worried about being late for his program. He didn't want to wear his tie but then relented. So we snapped that cute little pic after leaving the seats we beelined for and saved as soon as the doors opened 15 minutes prior. We dropped C off in her room and she didn't want to give up her flower that her friend in her class gave her before the program and she laid out in the hallway for a minute but made a quick recovery.

I was really worried for a minute. She was going to repeat A's performance from last year.

Then we head down to A's class and as soon as we get to the threshold of the door he freezes. He grabs my leg and won't let go. I try convincing, coaxing bribing... anything to get him through the door. Tearful cries. Locked arms. I finally let his teacher take him unwillingly but I had my doubts.

J and I make it back to our seat five minutes before the show was to begin. I keep staring at my phone waiting for a text that says to get him. I thought we were in the clear but finally does come through.

So J and I make the long walk back to retrieve A and then we head back to our spot. At this point I think I'm in the disbelief stage of - I can't believe this is happening again and I can't believe I'm lugging around this heavy carseat and dragging my noncompliant 4 yr old in front of a zillion parents and grandparents and aunt and uncles and EVERYONE AT THIS PROGRAM!

A is still crying/whimpering loudly and the pastor is talking and we are 5 rows from the front and it is kind of a problem. He is being too loud. And he tells me he has to use the bathroom. And C is on next. So I grab A and leave J in the carseat because what the heck else am I supposed to do because we have to be quick or we'll miss C and the 2s only sing 2 really short songs - see I know this because I've been to this program for the past 7 years.

We get to the bathroom and A is wailing because he knows he's in trouble and I'm rushing like a crazy to get his pants down and he goes and then as I'm pulling his pant back up the snap breaks off because I didn't unsnap them in the first because I was rushing.

A snap in time saves you a meltdown.

At that point A LOSES IT like loses his mind. So what do I do? Leave him in the lobby screaming but in the back of my head I'm like what if he runs away. I get back to my seat and to J who had a kind mom give him his paci back during the bathroom antics. The twos are coming on stage and I get a video of C who is proudly jingling her bells but I'm more worried about A who might have been stolen from the lobby so I run back out there and tell him we have to watch C and that he must be quiet. So we get back in with enough time to catch the last part of the second song and A and I go to collect C from the stage.

Somewhere in this mix of events I gave up my highly coveted seats on the end of row 5 so A and C and J and I crouched behind the first block of seats and watched the big preschoolers come on stage. I told A he needed to go up on stage or we would leave. Well bring on the crying once again. So I drag J and A back out to the lobby with C following dutifully behind. A is screaming about how he doesn't want to leave and I tell him he must go on stage and that I was not going to stay and watch the program unless he was in it! Finally I give up and realize this is the end and we must go so lug the carseat and a fitful A outside only to realize that the crazy crazy crazy stroller is still inside... See I moved it off to the side as to not block the aisle.

So I'm like A get it together and go on stage and sit with your teacher and all this will be forgiven. He settles down and agrees. So I lug the carseat back into the church with A and C following and we get to the stroller and I'm like okay A, go up to your teacher.

Insert all the crying.

So I swear I am pushing the stroller with one hand, dragging A with the other, bumming into chairs all the way down the aisle and C skipping right behind us with her pink flower.

Now maybe people will believe when I tell them I really have no idea what I'm doing and I'm flying by the seat of my pants and living on a prayer. So many people are like, how do you do it? You have it all together? Oh this is old hat? Well you are a PRO at this then - even the cashier told me that just the other day when I was checking out with J, assuming he was my first and found out he was actually numero six.

I will be the first one to proudly tell you, no I don't and tonight proves me right. Because you never know what kind of wild hair someone is going to get and throw you the biggest curveball on the ONE night of the season you desperately want everything to go right.

I could have gotten to the van and cried but I think I was too mad to cry. We got home and A headed straight to bed where he needed to have been hours before taking a nap. C and I snuggled up on the couch even though she should have been in bed and watched her playing Jingle Bells on repeat. She loves seeing herself. I love that she started jingling even faster when she sees me in the audience.

So the next day once I had time to collect myself and my psychological state of mind I calmly told A that he would not be going to his Christmas party at preschool because of his performance - or lack thereof - the night before. You know what, he didn't even fight me on it. He was definitely upset but he didn't cry. I thought I'd have to drag him out of the class kicking and screaming when I picked him up an hour early but you know what, he didn't cry one bit. He knew he was in trouble and was accepting of his punishment. I, on the other hand, felt terrible in some ways and vindicated in others. The last thing I wanted to do was pull my 4 yr old out of his class Christmas party - how cruel is that? But I knew I had to make a point and I did. A kept on saying that next year he WOULD go on stage. When I asked him why he didn't go on stage this year his response - I just didn't want to.

To be four again.

Parenting is not for the faint of heart and you have to crisis manage and make game time decisions and stand by them. You may question decisions and replay situations in your mind OVER and OVER again but say a prayer, trust your gut and know that there's a hundreds of other parents are doing the exact same thing.
at December 21, 2019