It wouldn't be Christmas without the annual Christmas card... 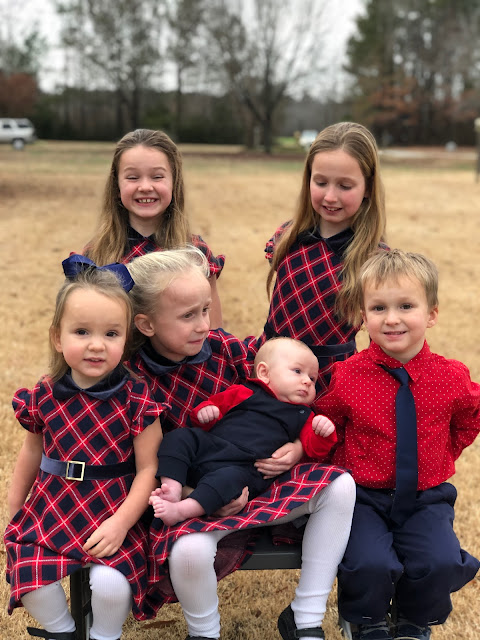 The outtakes are usually wildly hilarious to me. The threats of doing retakes until mom is happy are legit. 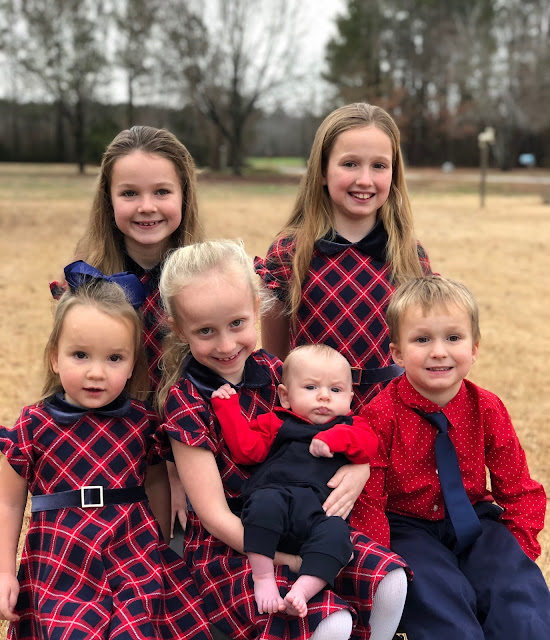 But generally produce at least one pic that is worthy of being sent. This year we rushed and did them one warm-ish afternoon. Fear not J's feet aren't cold. I got their dresses last year after Christmas and I actually just pulled the trigger on next year's (later this year's) dress this morning. It is probably one of the better deals I've gotten on 'the next year's Christmas dress'. 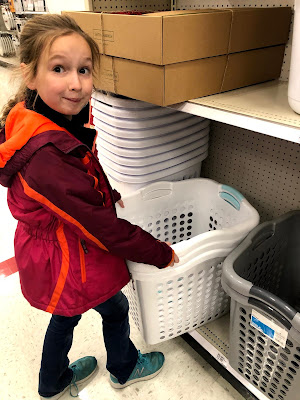 Other Christmas-ish things involved shopping. The kids exchanged names for secret sibling - which is always a HUGE hit (and helps keep gifts semi-under control). E was gunning for J big time and she drew his name and I promise I didn't rig it that way. E went shopping with me for other stuff - like the laundry basket (that contained Chika Boom Boom) for C. She looked at me like I had 2 heads when I told her that's what she was getting but then she got on board and decided this white one was 'cute' - that made my day. I mean what else does a 2 year out with 3 older sisters possibly need? A basket to tote around and sit and if it breaks mom doesn't care. 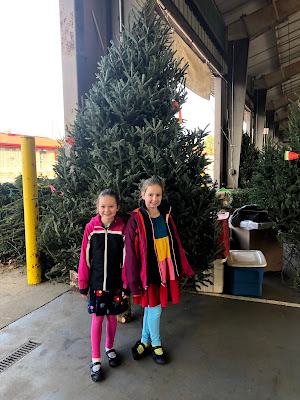 Then there was the tree. We always make it interesting by going to the farmer's market the weekend before Christmas. Lee proclaimed it one of his least favorite activities but the kids and I adore it. It is a hunt and a challenge to find the BEST tree and not pay a zillion million dollars. 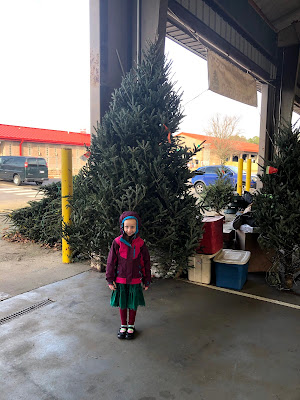 We went to one of the three places still open and they were selling all the tree for $35 except for the three big ones that were left. So we walked out with this 12 ft tree which was cut down to 7.5 ft and has been thristily taking up water ever since and not dropping many needles. 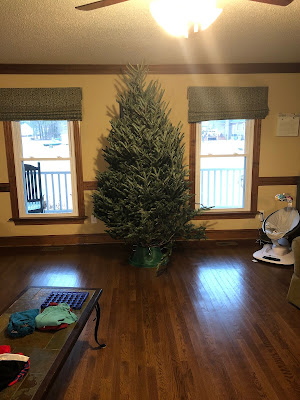 It was one of our better finds for sure and it smells great! 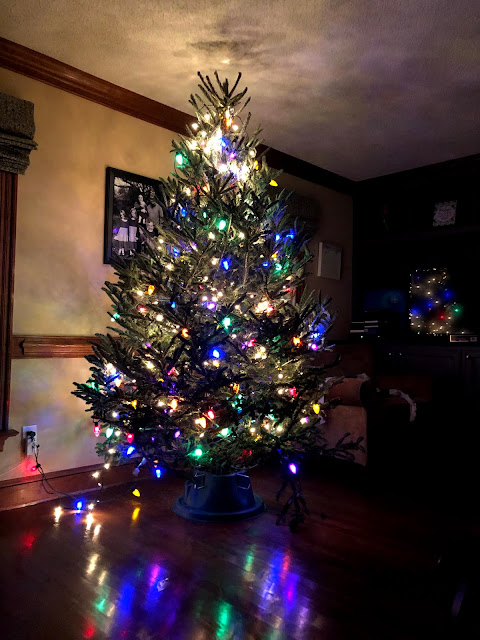 I think I put lights on it (with A's help) on 12/23. I wish we could just only put lights on but alas the kids love the ornaments and we decorated the tree the morning of 12/26 before Christmas with the Kibbes. I do love waking up and turning on the tree and sitting in its glow. 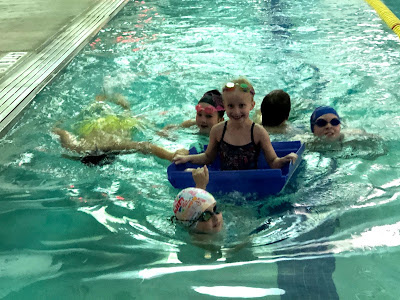 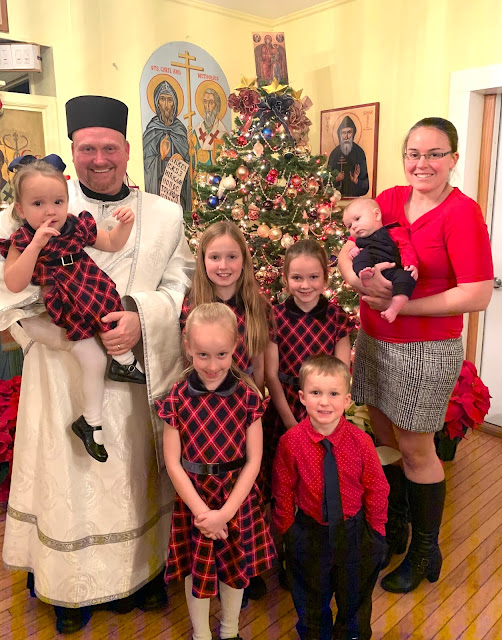 Then we made it to Divine Liturgy on 12/24 and behavior was shockingly great. One of the dads helped corral C for me by stepping in her way every time she'd bolt for the back. After church we went to cousins house for some food and fun - so so great. Then we settled in at Grammy and Grandpa Joe's for the night. Packing up for eight is no joke but it was very much worth it. 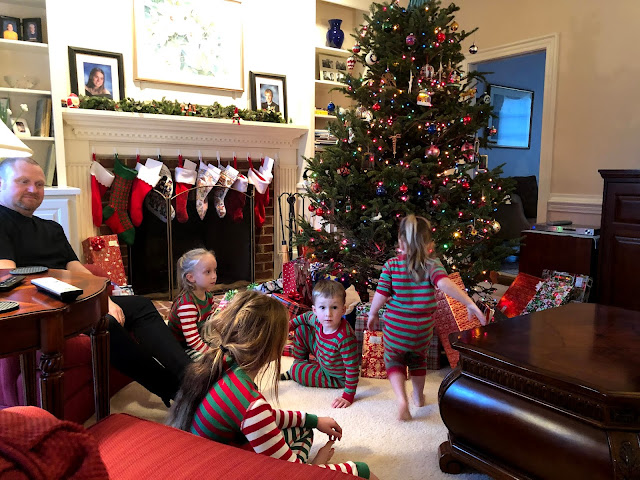 Somehow we held off the presents until almost 8. Then it was a pretty frenzied opening session so maybe we can work on that next year 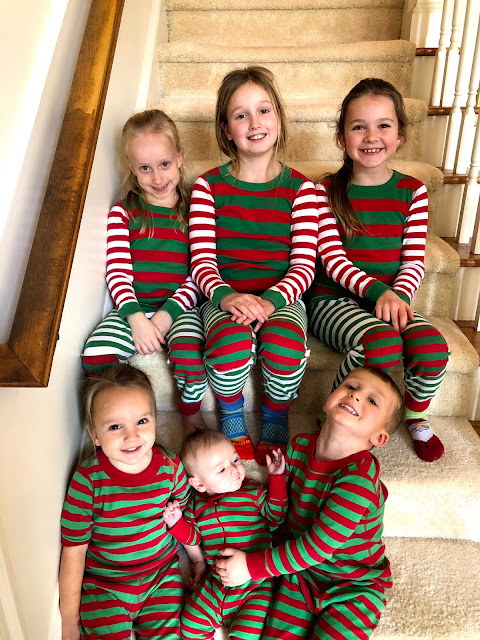 We had to recreate waiting on the stairs because J wasn't up when we opened presents - which was perfectly fine for me. But they don't actually have to wait upstairs anyways 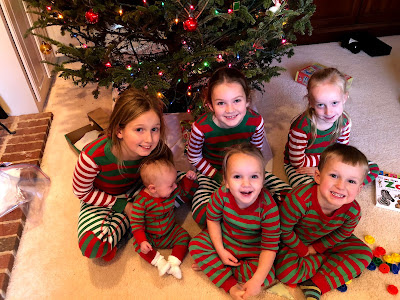 Since that meant a quiet breakfast - which was the usual casseroles and mimosas - except I forgot the cranberry juice this year. Dinner was Lee's homemade lasagna - always a treat. 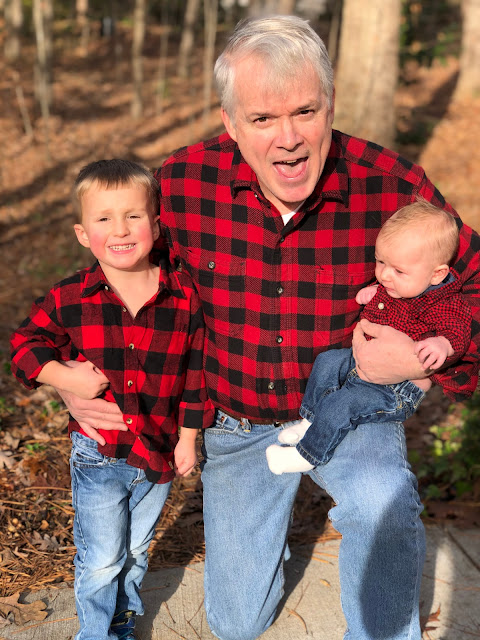 Grandpa Joe and A and J matching before our walk.

And I have just about zero pictures from Christmas with Lee's side of the fam because there was so much fun and people and playing going on. Though the highlights were playing with Wayne the dog and the ever famous mushroom and blue cheese sauce for the AMAZING beef that was cooked.