Thoughts on Lent During a Half Marathon 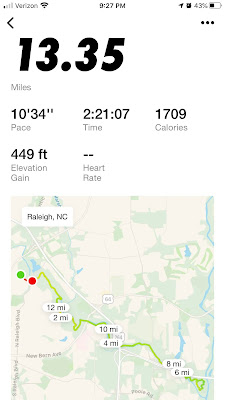 Recently (ish), I ran in my first half marathon since 2016. Somehow I got an email on New Year's Eve that there was going to be a price increase the next day for this small(ish) race in Raleigh in two months. I had already started running again and so this seemed like the perfect race.

My training basically consisted of running once a week - so it wasn't really training in my book. It was running just enough to know that I'd finish. After my final 12.5 mile run I thought I was in trouble because I had this terrible foot pain which possibly was a stress fracture? Who knows. Anyways, I powered through that and then it was looking like it might snow the day of the race - but it didn't though it was COLD and the coat I brought had a broken zipper that I discovered as the fam was booting me out of the van.

My goals for the race were

- When I left the house one day during my 'training' Lee told me - 'don't fall out' aka don't die, for anyone who doesn't speak Eastern NC. A then followed with ' don't fall over... and get smushed by a car'

All week I knew I badly wanted to finish in under 2:30 but I kept wondering what if I stayed with the 2:15 pace group, could I keep up that kind of pace?

So in my moments before the race start I decided I'd give the 2:15 group a try. The worst thing that could happen was I wouldn't keep up with them and I had like a zillion hills (lies) in the runs I had and this route wasn't nearly as hilly. So we were off to the races.

There's lots to think about when you run. Even with music in the background, my mind wandered. I kept my eye on the little blue flag with 2:15 on it. The guy who won the race passed us 40 minutes into our 135 minute journey. That was insane. As the other pace groups made the loop and headed back to the finish they passed us on the trail. We passed other groups behind us as we made our way to the end. It was kind of neat getting to see everyone in the race moving at their own pace.

Somewhere around mile 10 I couldn't push through anymore. The pace group kept on getting further and further away and I couldn't keep up. I was frustrated but glad that I started running with that group in the first place. I finished in between 2:15 and 2:30 so I actually surprised myself.

All the while during this race I kept equating a half marathon to Lent - I guess that's what happens when you run a race right before Lent begins? What pace group am I going to be in for Lent? Am I going to push myself to be a more rigorous pace group? Pace groups might include - prayer, fasting, almsgiving, Stations of the Cross, Presanctified Liturgy, reading the Bible - any combo of those or many other things. Maybe I should push myself to be in a more rigorous pace group - I might just surprise myself.

BUT what is required is signing up for the race. Even the person who was the last one to cross that finish line still got a medal but the important thing is that they SHOWED UP.  Which then made me think of St. John Chrysostom's Paschal homily:

If anyone is devout and a lover of God, let them enjoy this beautiful and radiant festival.

If anyone is a grateful servant, let them, rejoicing, enter into the joy of his Lord.

If anyone has wearied themselves in fasting, let them now receive recompense.

If anyone has labored from the first hour, let them today receive the just reward.

If anyone has come at the third hour, with thanksgiving let them feast.

If anyone has arrived at the sixth hour, let them have no misgivings; for they shall suffer no loss.

If anyone has delayed until the ninth hour, let them draw near without hesitation.

If anyone has arrived even at the eleventh hour, let them not fear on account of tardiness.

For the Master is gracious and receives the last even as the first; He gives rest to him that comes at the eleventh hour, just as to him who has labored from the first.

He has mercy upon the last and cares for the first; to the one He gives, and to the other He is gracious.

He both honors the work and praises the intention.

Enter all of you, therefore, into the joy of our Lord, and, whether first or last, receive your reward.

The rest of the homily is here.

Anyhow I meant to post this three weeks ago but you know, we've been busy Lent-ing up over here. Presanctifieds have been going well. Hopefully we will be hitting Stations this week (Lee took A and C last week while I had everyone else at a swim meet). As much as Lent means more driving back and forth to church and more meals on repeat, it is a good time to get back down to the basics and peel back some layers and do some introspection and prayer.
at March 11, 2020