Phew! Has it really been six week?!?!? Pascha was two weeks ago today and that seems like it was at least 2.5 million years ago. Everyone has definitely settled into our daily routine and we still have come to appreciate our lack of scheduled weekends even more. Saturdays basically consist of cartoon watching until 10, chores, lunch and playing outside.

But there's a reason I have this posted on the microwave.

The daily grind has been challenging (as it always has been) but it ways that are becoming normal (but weren't until 6 weeks ago). This is tough. The kids miss their friends, their schools, their teachers, their coaches, their activities, their churches, their grandparents, their aunts/uncles/cousins - and Lee and I miss all of the above too. It's just a little easier for he and I to process the change and this distance. 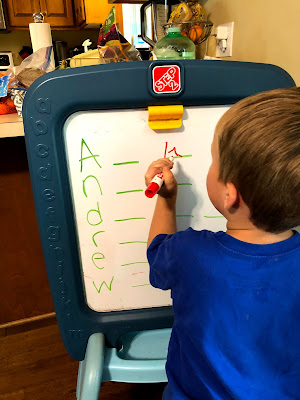 A saw R practicing her cursive handwriting during a Zoom meeting so after he wanted to get in on the whiteboard action. 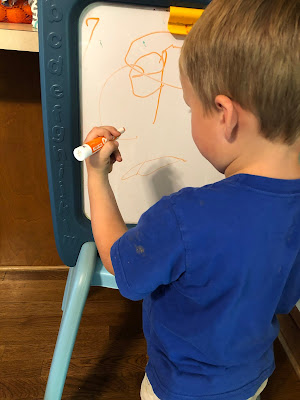 See the difference? I texted his preschool teacher (who I don't know who adores her more A or me) and she reminded him to pinch his marker (hello handwriting grip!) and he grinned so big and changed it up : ) 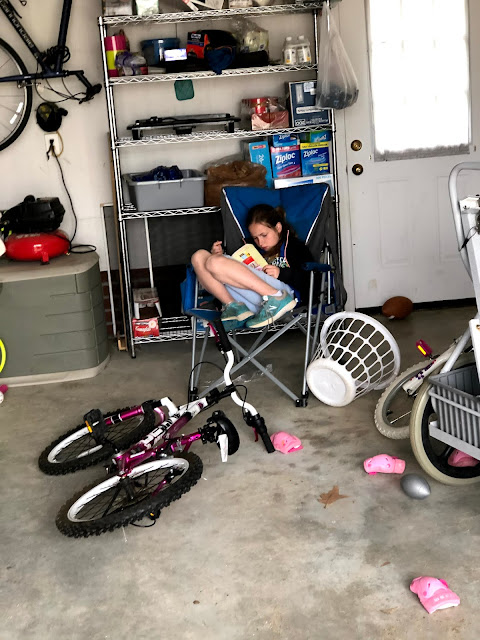 During outside time there's a good chance 'the girl who drinks books' can be found reading. Fortunately Grammy is feeding E's book addiction and it is like Christmas when new books arrive. The problem is she is so excited about some she'll read them in a day or two and then mope around the next week because she 'has NOTHING to read'. Though she has gotten better about rereading books - something she stuck her nose up at a few weeks ago. Desperate times call for desperate measures. Also, she got to play librarian for our neighbors and I finally had to put the brakes on at about 12. I think she just wants other people to love books at much as she does! 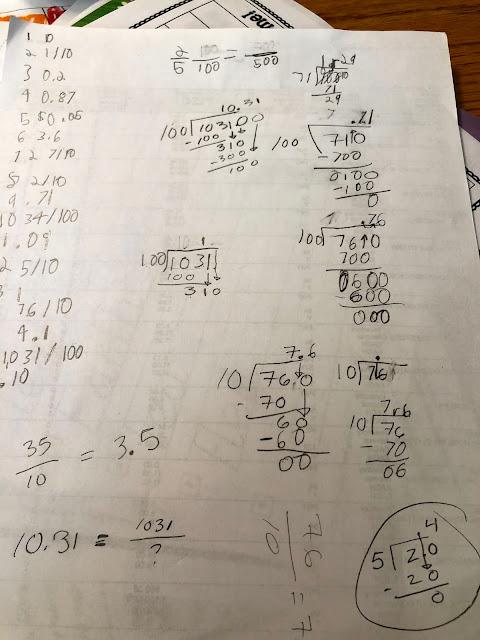 It's been all pencils on deck for decimals and fractions this week. Showing your work in order to explain it has been harped on again and again. R was learning about money so we got change out and talked about buying things and do we have enough money to buy items.

All the school is sprinkled in between feeding times (because everyone is starving all the time) and me working. It's funny because I think there's increased home background noise on some of the calls I'm on. Especially if that person is working from home and we've talked about having to juggle remote working and parenting/schooling/life currently. Funny the things you can bond over... 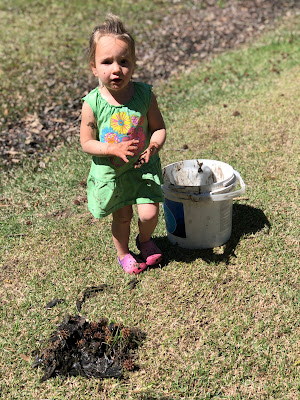 She is basically living her best life every single day. She is so cute and so naughty. 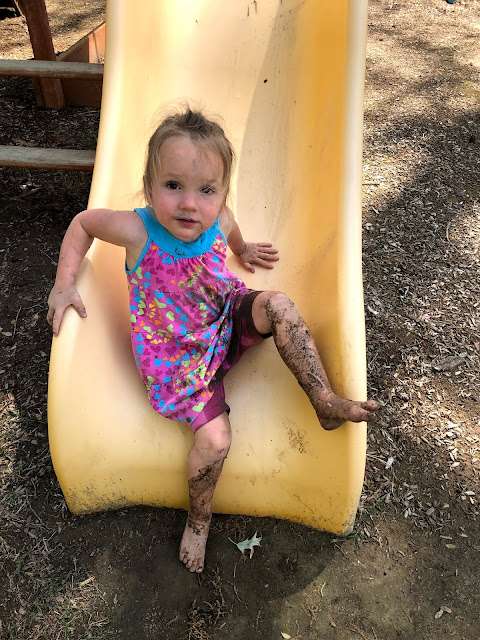 Most days after the morning walk and snack, she and A are banished to the outside (which they are mostly fine with) so the big girls can get school work done. They always shoot straight for the back yard and to the ditch that is full of muck and leaves and dirt. They were 'building a bridge' across it. Several days she had to get showered BEFORE rest because she was so dirty. I have legit concerns about snakes so we are making a very concerted effort to steer clear of the ditch. She and A have also got into a few ant hills this week. A knows better than to stick his foot in them but C is just starting to test the waters and has come up to the house more than twice screaming about her newly acquired ant bites. 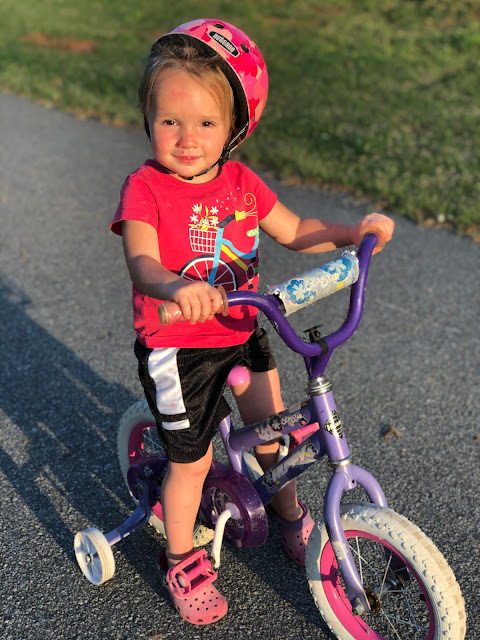 She is basically a daredevil too. I am constantly reminding/pleading with her to wear a helmet. She thinks she's about 13 and tries to keep up with all her older siblings so she races around on her bike. There's one spot in the front side yard with a small hole in it - perfect for riding bikes in and getting a little bump on the way in and out - that spot is frequently part of the path they ride in daily. 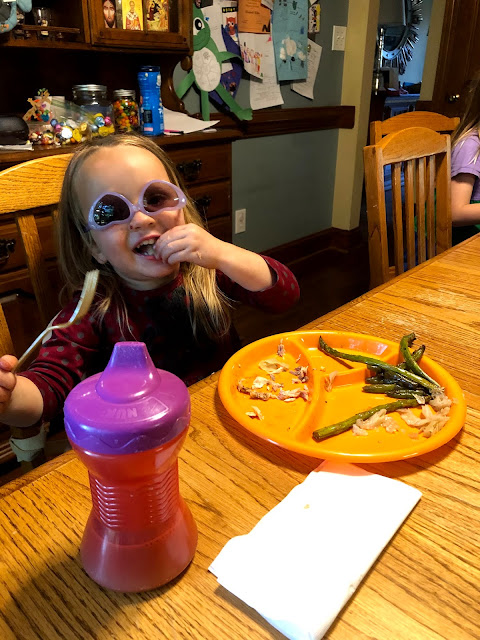 Case closed. She's a lunatic but we LOVE her

Everyone else living their best lives: 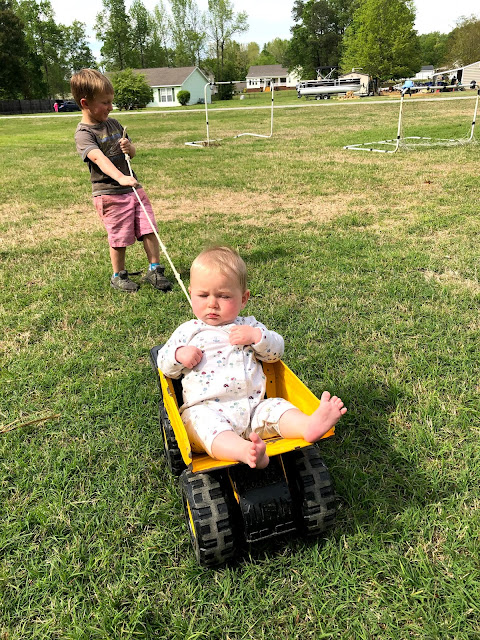 A always said he wanted a little brother and I think this is why. J doesn't even realize how great of a big brother he has yet!

I love our little street that has about one car per hour going down it. The trash truck came the other day and I got a bit nervous from my work perch so I ran out to check on everyone and of course everything was fine. One morning A and C wandered and C found a puddle and came back with wet brown shoes but that's not bad for three weeks of this. They were scolded and haven't left the yard again. 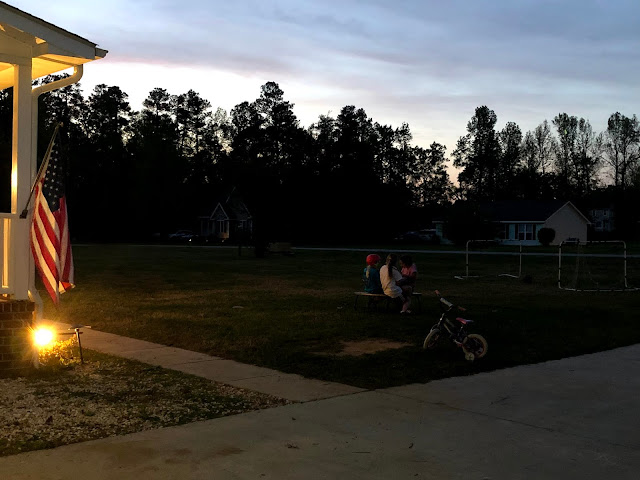 We've given the girls a bit more freedom to play outside at the neighbors house and come home as they please. If we didn't love our neighbors before (which we did) then we really love them (even more) now. This week there's been several later evening soccer games. Friday night Lee got home from work and J was in bed, A and C and Papa watched a cooking show and me and the big girls got out for a neighbor pick up game - it was a blast! 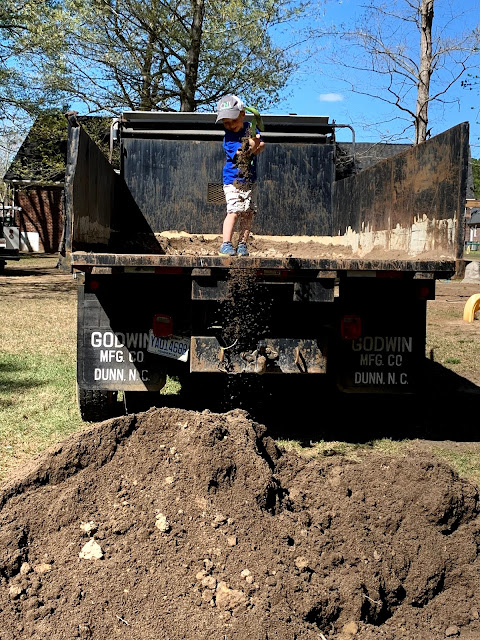 This could have been categorized in the next section but wasn't because A is a cat. He was shoveling out dirt for the garden and took a really big step (out of the truck) and Lee and I watched in horror (like the slow-mo kind) and he landed on his feet (thank the Lord!). Lee put the gate up to the bed after that. He and the kids have been busy on a garden. I am encouraging it but keeping my distance just like I will if Lee builds the chicken coop he's been talking about. 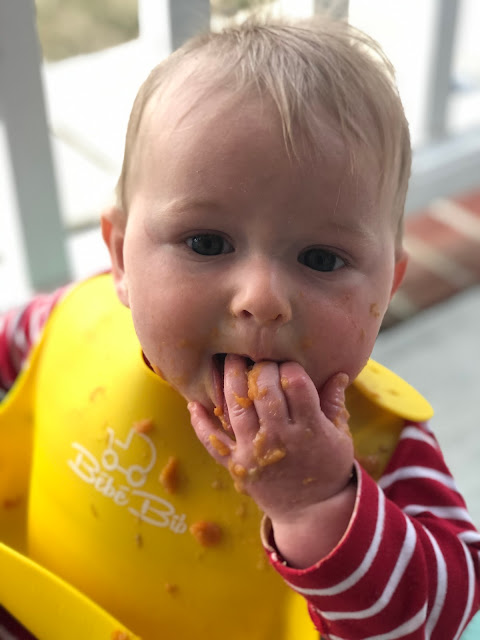 J isn't forgotten in all this but he's so chill and quiet and undemanding of my attention (when other people are) I like to give him extra attention getting ready for bed. For some reason he can be super chatty and giggly that time of day and it is really cute. 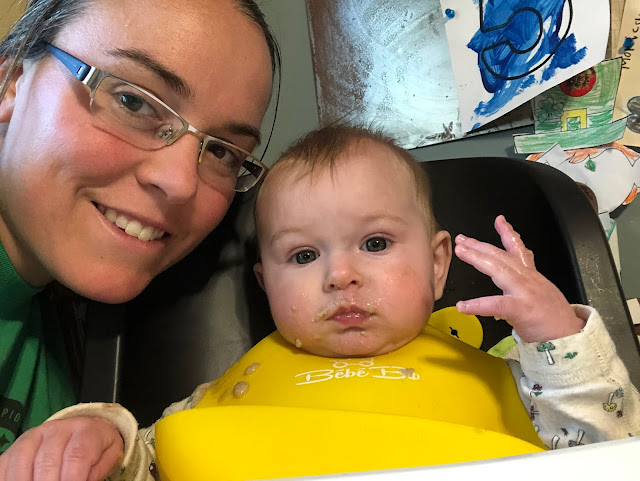 He's basically an eating machine now and that is about the only time he does pipe up and let his presence be known. He is super impatient around dinner time so I've learn to have my ducks in a row or our ears will all pay the price. 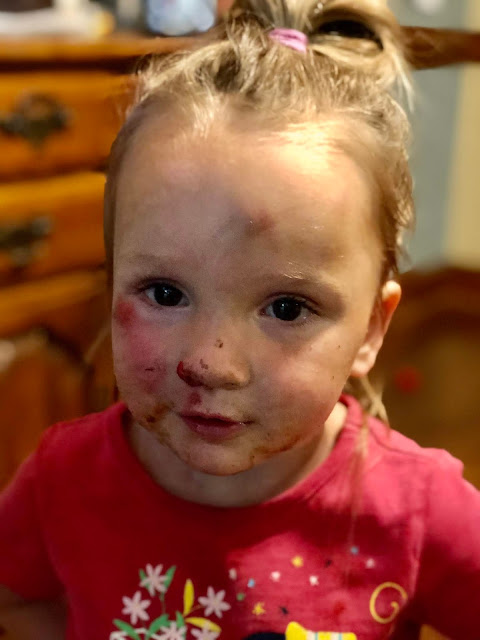 Pretty sure some of the marks on C's face near her mouth are some food remnants and not injury. She basically moves a zillion miles a minute and should where a helmet at all times and continues to be fearless through all her bumps and bruises. The older girls would have been reluctant to play as hard as C does because of her battle scars but C shakes things off much easier. 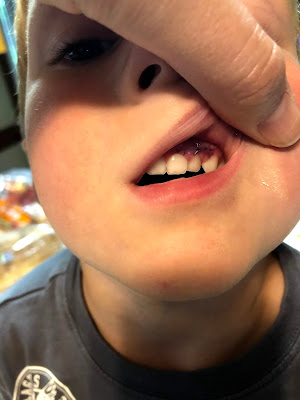 A fell off the couch a few weeks ago and I was almost at the point of taking him to the dentist because it looked so terrible but she said to give it a day or two and it was completely fine. 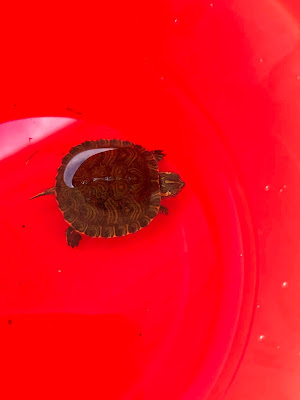 Lee texted me the afternoon I was at work a few weeks ago and said he found another turtle about the same size as Yertle. I told him to keep it because I wanted to see it and come to find out this turtle was MUCH bigger. 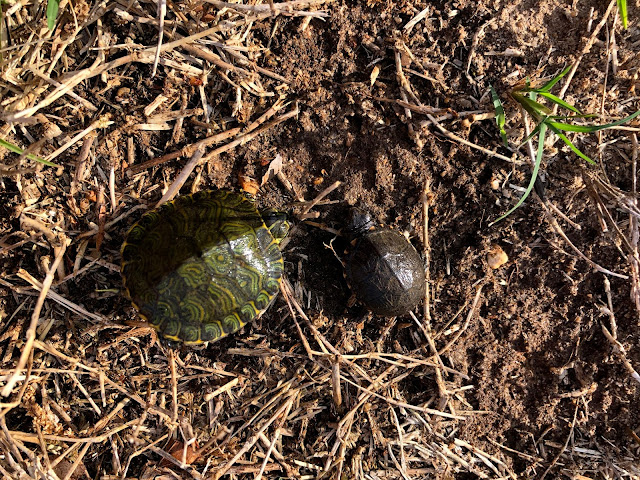 The shell was gorgeous and I don't know if it was the size compared to Yertle or the coloring or what it was but the turtle 'looked' mean. #turtlejudging 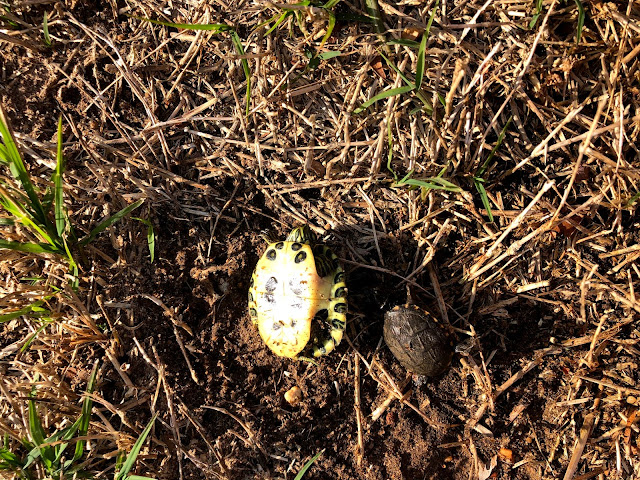 I don't know what kind of turtle it was but we put it out by the ditch and R was distraught. I told her the turtle might come back one day and I don't think she believe me but we couldn't have two turtles. 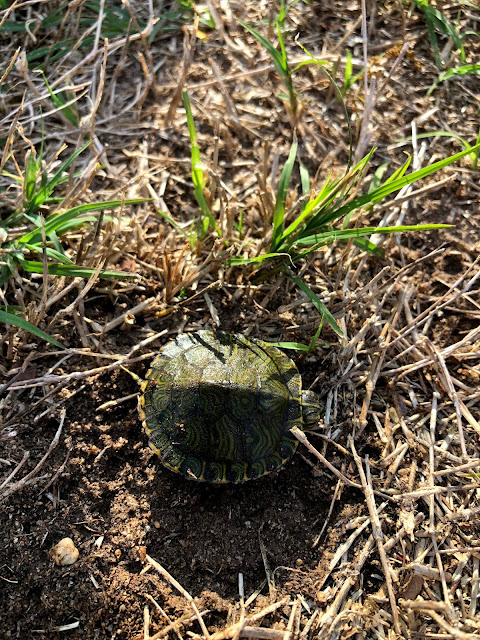 I broke down and got turtle food - yes its a thing and it is about $3 on Amazon. So now I feel good about Yertle getting food because I was really worried he wasn't eating the fruit we were putting in his container. It is super fun to watch him eat. He definitely prefers the shrimp to the pellets and he is very much a focused hunter when there's food around. 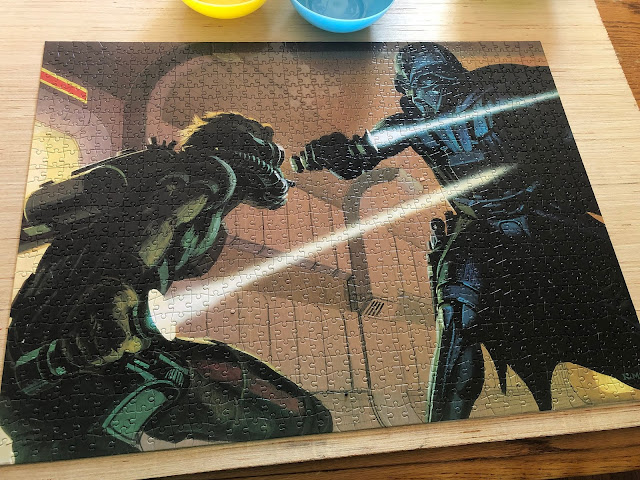 We finally finished the Star Wars puzzle and it was a challenge. The black parts of Vadar were basically a try every piece everywhere it can possibly go. 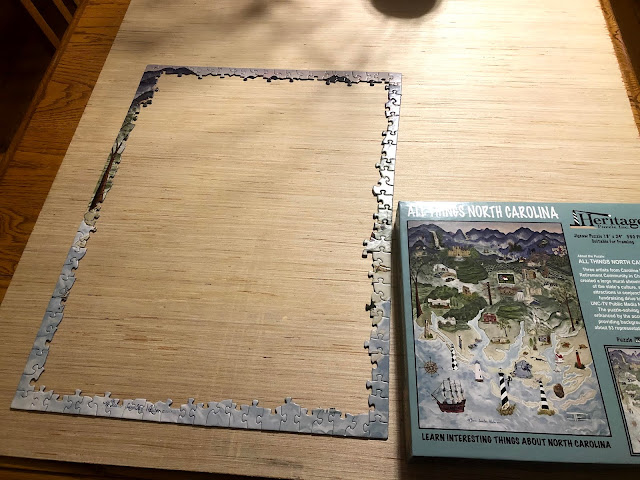 I think we thought this puzzle would get put together much faster than it did. These piece were cut in neat ways but were were cardboard-ish so didn't snap together like a Ravensburger puzzle. 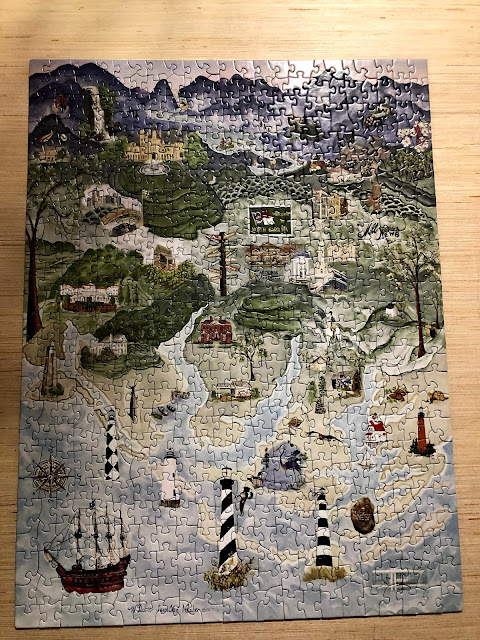 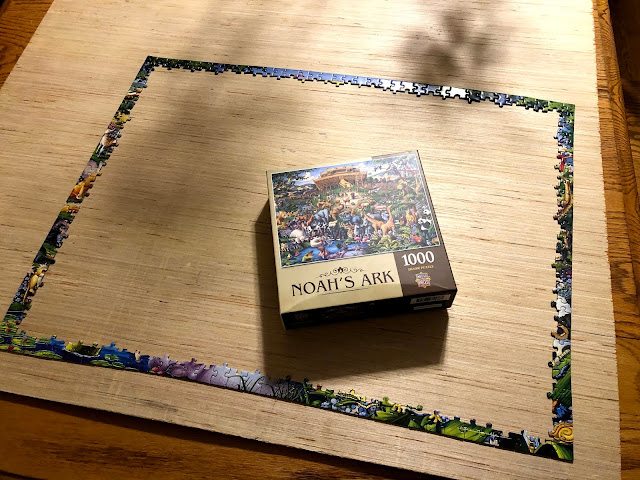 E and I just finished this (whimsical) Noah's Ark puzzle before bed last night. There are dinosaurs and polar bears drinking soda and owls reading - which I didn't realize until we got a close look at the box. It was a fun one because of the colors and textures and patterns.

I've stocked up on puzzle glue. Between the puzzles and the extra time I've had to think about wall projects - we won't have a bare wall. Now I just need to channel some of my energy/effort to A's stocking and knock it out!
at April 26, 2020