The youngest big girl hit the seven mark a few weeks ago. She get lumped in with 'the girls' which is code for the big girls. C will shout up the stairs - GIRLS! GIRLS! come down. The three older girls have become their own little unit. 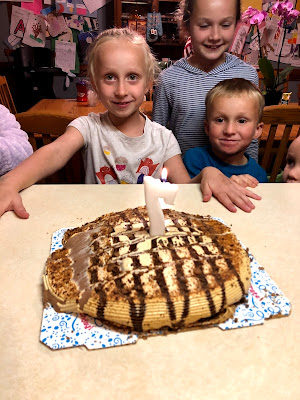 E did not make her cake this time because we were tight on time the weekend before so she said she wanted an ice cream cake. I wasn't super impressed by this Reese's cake especially because it slid out of the box like this but the kids liked it and so that's what matters. 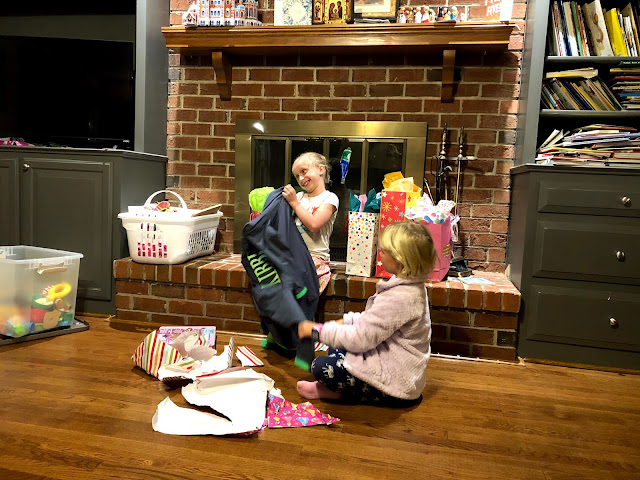 I call M my closeted competitive kid because she can be so go with the flow but then this ultra-competitive side pops out. She hates losing. Anyhow, she's been swimming ever since the Y (huge praise) was able to reopen swim team over the summer. With it getting colder I dug out the swim warm up I've found in her favorite color. I was SURE she would freak out because she wouldn't have a clue about it. I was super careful about stealthily picking it up and not telling big sisters. Wouldn't you know, when she got into the car after swim practice, 30 minutes before we gathered for pizza and cake, she looked at me and said - I really hope I get a swim warm up for my birthday. Best laid plans.. best laid plans.
So the bday was a success and after pizza and cake there was lots of playing with LOL and Barbies which had to wind down because there was school the next day.
at November 20, 2020