Linking up with Kelly ... SUMMER!
---1---
E was dropped off at the happiest place on earth on Sunday - and no it was not Disney. Week long sleep away camp that she’s been talking about since last year when it was broken into half week covid friendly sessions. I think she would stay all summer if we could afford it. I’m sure we’ll get tons of details when she gets back because it has been device free and contact free week - not that she has a device of her own to bring anyways… 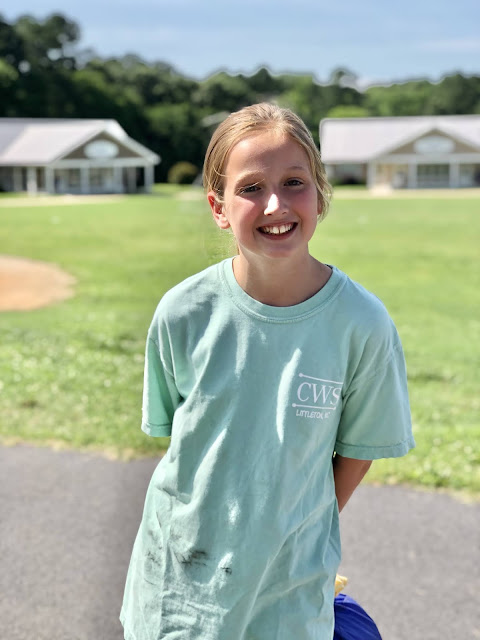 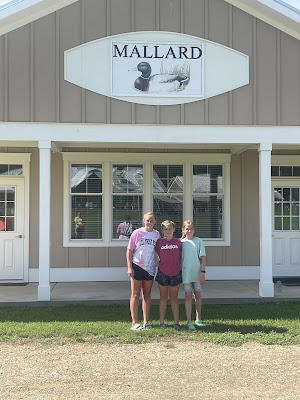 She'll be back in July for another session because she eeked into two weeks of camp that fills of almost instantaneously upon registration opening - I literally told everyone in my office to not expect me to do anything from 9:58 to about 10:05 the day the camp opened.
---2---
R and M got to go to horse camp for a few mornings this week. M wasn’t thrilled with her group because she wanted to be with her a friend but she did like her horse and I kept telling her she didn’t have to go back if it was THAT bad. 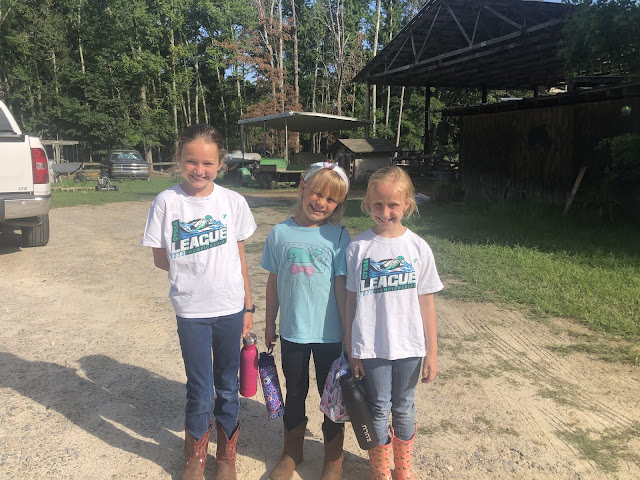 I had to dig out jeans from the fall/winter clothes that I still have not completely sorted from the clothes switch!
---3---
We celebrated family Fathers Day a whole week early this year because yours truly doesn’t cook for sport or attempt to out cook the man of the house so we always go out for brunch. On the actual day, my parents and brother will be here and we have two campers jet setting next week so early it was. Lobster Benedict. Check. Loads of chocolate chip pancakes and tea and one tummy ache later - we did quite well. Mostly because Papa tolerated holding J the entire time. J is a frequent visitor to Papas lap when he is eating. It is a terrible habit but J is so stinking cute so he tolerates it. 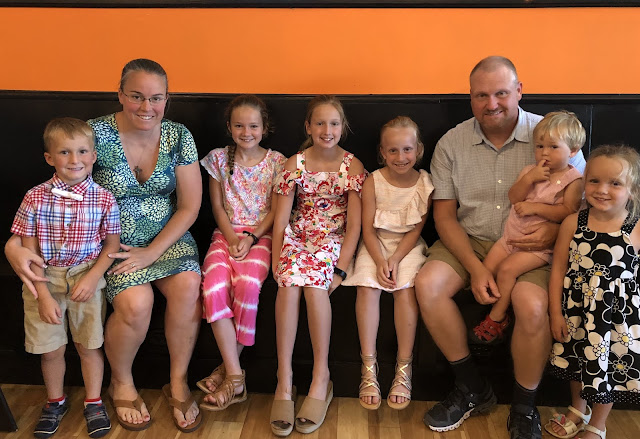 The girls wanted to wear shorts and their new shirts but I reminded them we rarely go out and this was for Father's Day and they change into more dressy clothes WITHOUT a whine or complaint - insert all the shocked faces.
---4---
Last weekend we finally got R a new bike. Hers may have gotten run over by construction traffic so she’s been without a bike for a few months plus she legit needed a new one. Have you bike shopped recently? I don’t think it is as Hunger Games ish as a year ago but bikes and good deals are few and far between. R and M have stayed out riding bikes until dark this week and one night they caught quite a few fireflies. 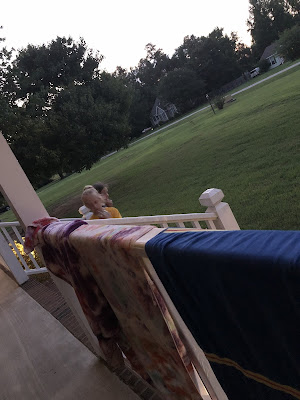 The evening weather was amazing this week and Lee and I sat on the porch several nights enjoying the non-humidity. I can't say this week will provide similar opportunities. I think the humidity is coming. Plus he's got 5 evening pool appointments in 3 nights and 2 more to schedule so M and I will be wallowing in evening loneliness next week - E and R won't be home so it could be an epically fun week for M or the worst week of the summer for her.
---5---
The first summer swim meet of the year was this week. A and C swam pup squad though after night I’m hopeful A will get bumped to 6 and under in the next week or so - he can do it he just isn't confident that he can actually swim. Lady C was happily whisked down the lane and content with copious amounts of snacks. R swam with the usual suspects and finished in her usual suspect type manner. M rocked out her events and nearly got outtouched in back. I’m hoping they’ll throw her in IM next meet. With only 4 meets and an action packed summer schedule I don’t think all five Kibbes will be at one meet together : ( 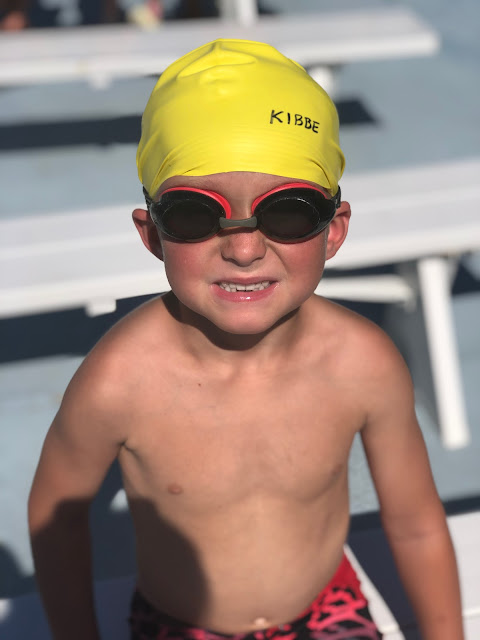 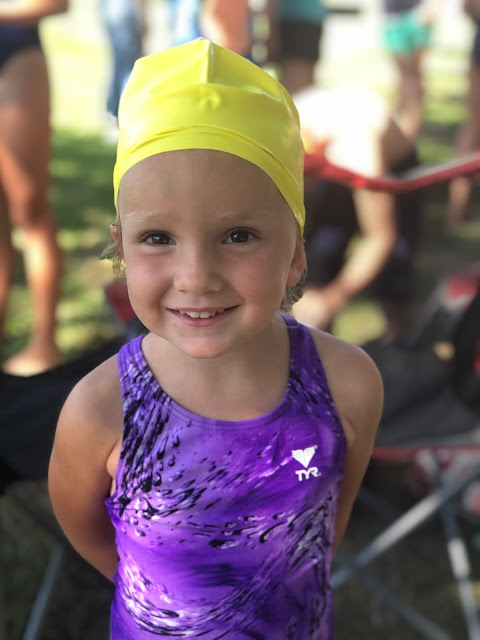 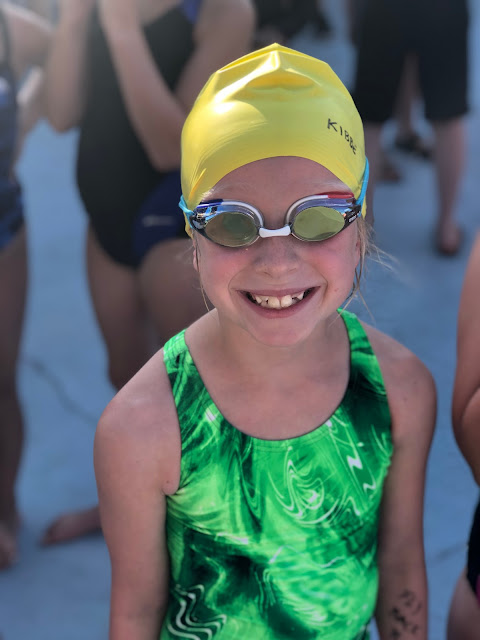 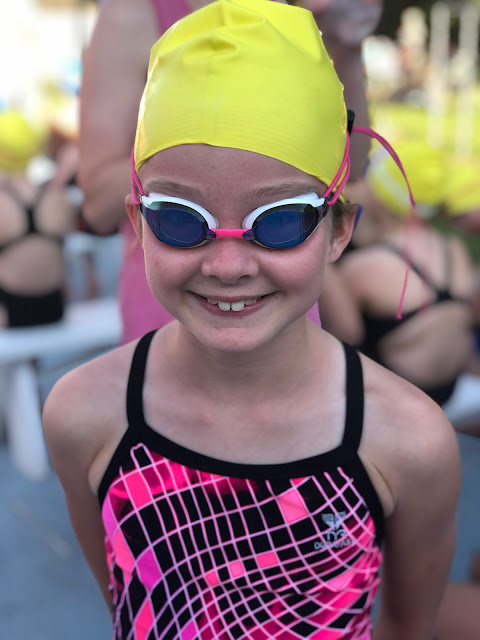 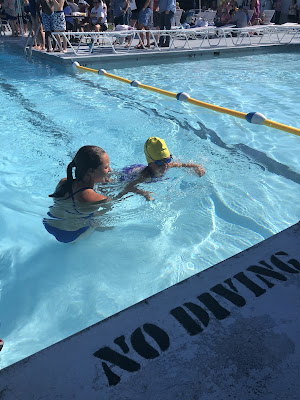 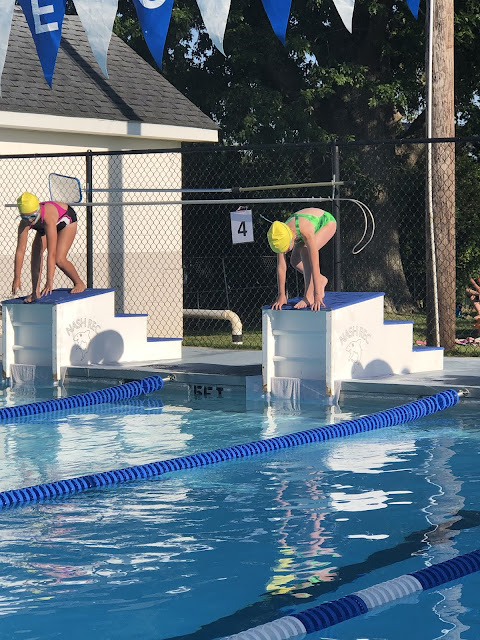 She is such a fun swimmer to watch and smoked everyone in fly. She is missing her BFF competitor in crime this year. 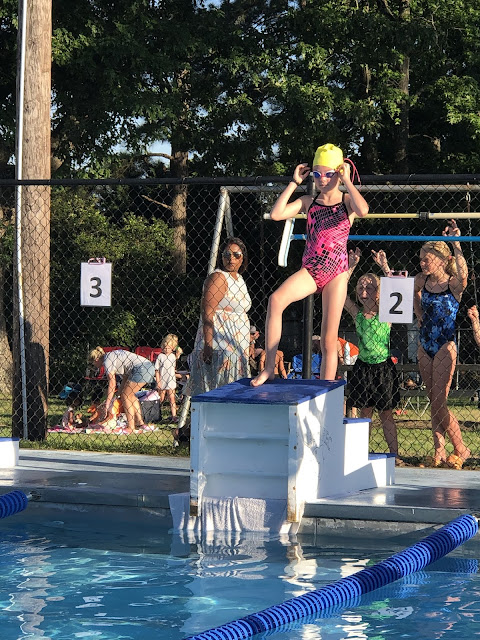 I didn't even notice M in the background! Cheering on her big sister. R has got great competition just in her age group on our team. I hope for her sake she can snag a blue ribbon but it will be tough.
---6---
Lady C had a bday this week. Actually the night of the swim meet which was hilarious because she waffled on wanting to swim all week. E was still at camp and Papa was out of town for work - insert all the laughs - so we settled for post meet popsicles and a party the next day. 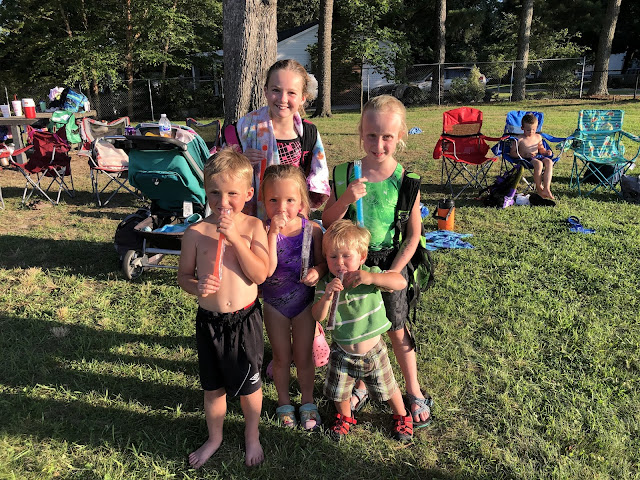 Everyone say Happy Birthday C!
---7---
Addition construction seems to have an end in sight. I’ve been able to hold it together a lot in regards to the stress of the disruption and disarray and everything but last weekend it really got to me. I think I just want my house back. I don’t keep the tidiest or cleanest house - I like to think we go for the more lived in style - but I do like order and when stuff has a spot even if it doesn’t always get there - there’s at least a place for it. I was hopeful the painters might finish this week but that’s not in the cards. We did get a firm date of 6/29 for floor finishing so I’m thrilled.
at June 19, 2021