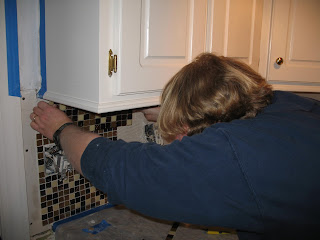 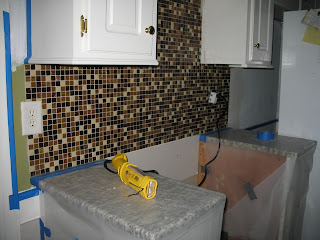 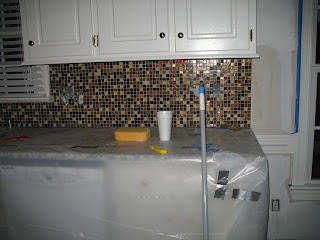 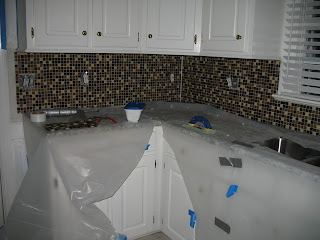 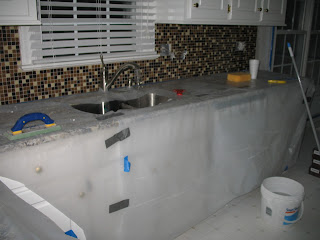 Well nothing that significant happened between days 3 and 4 so that is why there was a delay. Now you can see a huge difference in the kitchen! Lee and his brother worked til 7 last night getting all the tile up. I think it looks amazing, if I may say so.

So let's recap. We picked this tile out after much deliberation at Lowe's. When Lee was putting it up he decided not to put up the accent pieces which I think was a good decision. Also, we scored some manufactured hardwood mahogony floors from Home Depot - the RMT store is going out of business. After weighing the options - laminate, manufactured hardwood or true hardwood - we went with the manrufactured for a couple reasons.

1. The laminate was a lot thinner than we expected
2. The true hardwood has to cure and was a bit out of our price range
3. The manufactured came with a 55 yr waranty and was slightly more expensive than we wanted but it was a good deal.

We had a marathon night between Lowe's and Home Depot but it was well worth it.

From what I understand on Friday getting the board back up that was torn off with the tile was much more of a job than expected but got done. The green walls were primed for the toupe color. There is much action about this morning. Fingers crossed everything will be done tonight! That would be so impressive - renovation in 6 days!!!

I must have side note about our faucet. The Lowe's guy came and hooked up the sink and installed the faucet. Clearly this guy did not know what he was doing because he did not put the faucet together correctly - something Lee and his brother figured out after the fact AND the guy tried to blame it on the brand faucet - a Moen. Built for Looks, Built for Life. Ha! While we are on that topic, the faucet has another problem. It should go from a solid stream to a spray and back a the push of a button. Not so. After giving the beebster a bath the first night we had it, the thing is stuck between the spray and stream settings. This Moen is not everything it is cracked up to be for sure. Will update about that, but there is sure to be some words between Lee, Lowe's and Moen over this!
at February 05, 2011