Our standard craziness with a few old pics thrown in...

This week's weather has been super weird... As in it was 35 degrees one morning. These pics are from St. Patricks Day when it was over 80 and the girls BEGGED to get in the 'sprinks' aka the sprinkler or the pink-ka-la as R says. 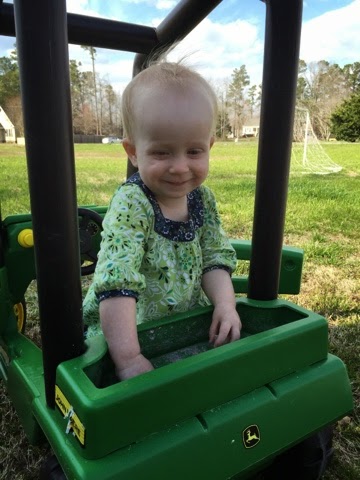 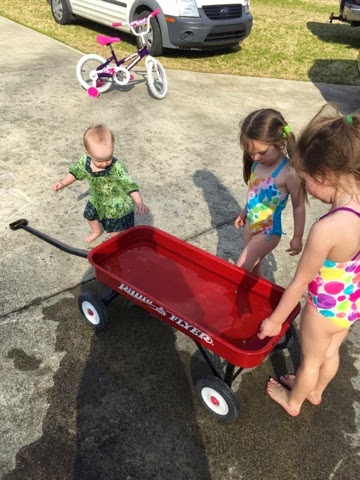 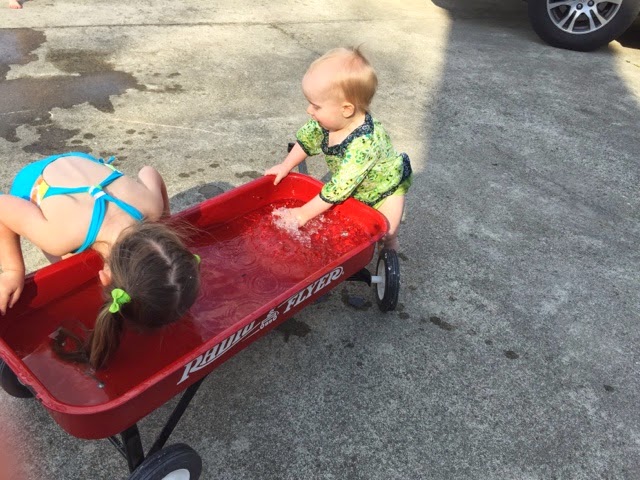 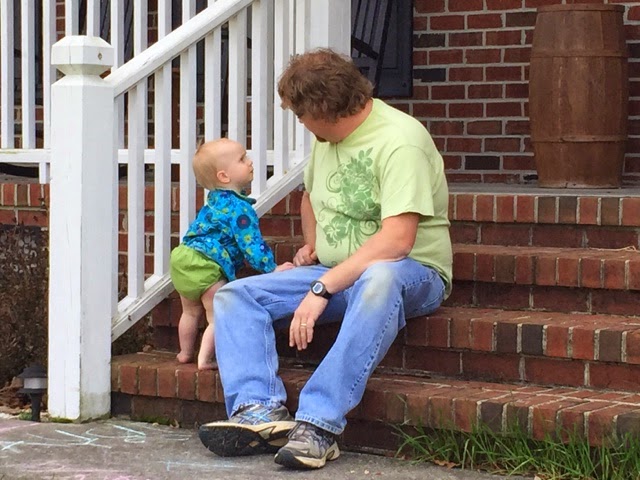 I had to put M in something different after she took a few dives in the 'pool' aka the wagon. I love how attentive she is to Lee in this pic.

Speaking of pools we'll be finding ourselves at the pool much more frequently this summer so we are excited about that - actually E declared she didn't want to go but she was lured to the idea of 'swim team' because of the fancy bathing suits and possibilities of being able to play in the 'shallowness' not the 'deepness'.


M has taken to wanting to do EVERYTHING by herself 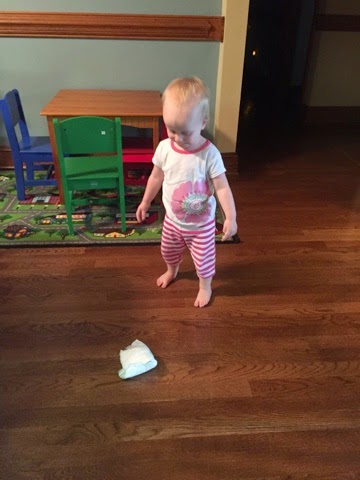 Including throwing away her diapers.... 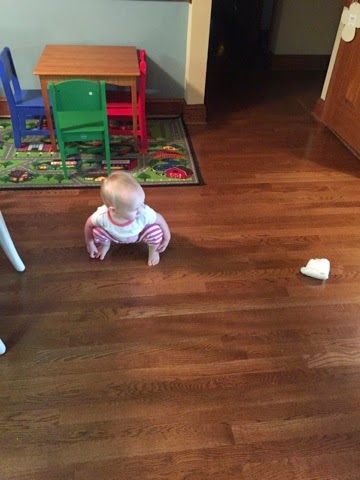 I'm hoping that skill will be perfected come October. I am also amazed at the things she does understand. Putting on shoes. Or I'll ask her where her socks are in the morning and she sits down and looks at her toes.

We still have lots of Easter candy left. The girls are working on polishing off their chocolate bunnies. 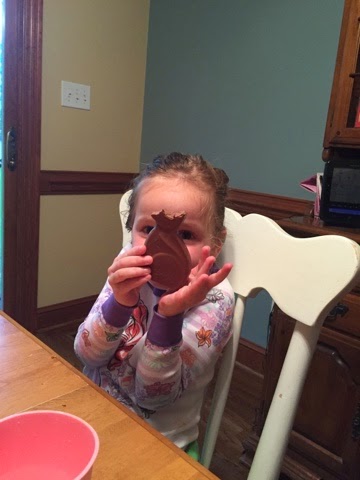 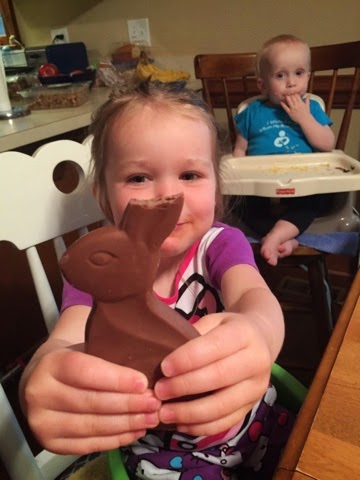 Apparently most people go for the ears first. 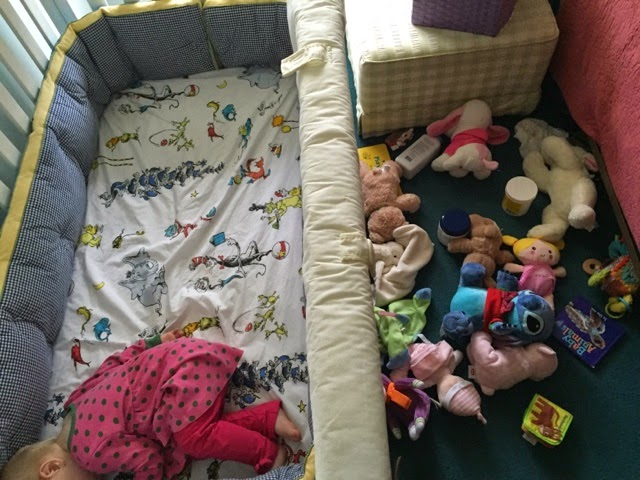 M has gotten SUPER particular about what she sleeps with. Currently she only wants Nini, her Corelle baby (that smells like vanilla), and her pink bear in bed. If I try and send her something new in it is met with a 'NO', 'NO', 'NO'. I've tried putting a book on the edge of the crib and she just tosses it over the side. It is super funny.

One day before rest, E was upstairs playing and R was coloring and R just got to talking. And talking.  AND TALKING. It was as if since E wasn't around she could get everything on her mind out. 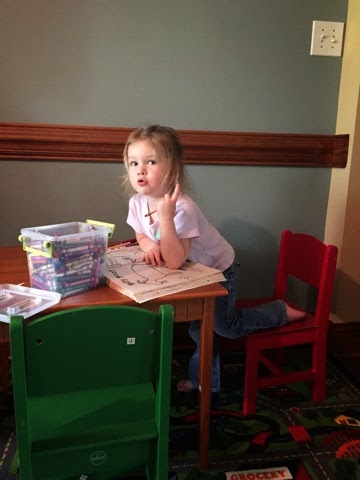 I have a 4 minute video of her just chatting away about the most random stuff. Seriously if this kid ever needs surgery and has to go under anesthesia (please Lord I hope not) - she would be so funny to listen to as the drugs wore off. 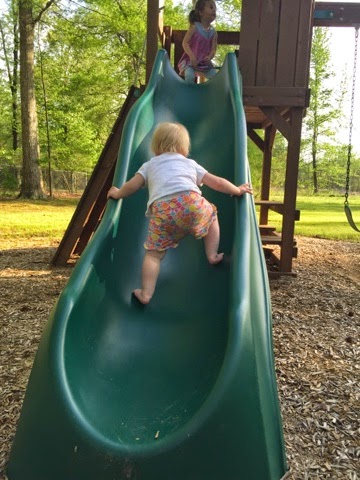 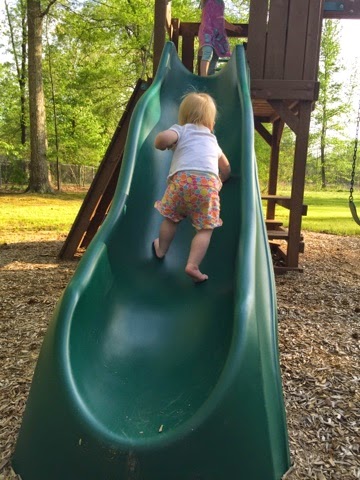 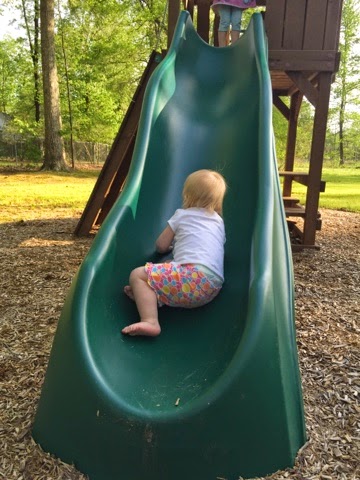 So yes... I'm not terribly in favor of 18 month olds climbing slides but M thinks it is hilarious and she really only makes it up about a third to halfway before gravity takes over.

In other news.... We have E's birthday party today since her actual birthday is on Mother's Day - which she has SERIOUS beef with. I think we've convinced her that she will not actually be 5 at the party - this makes her VERY upset.

We've got a busy weekend aside from her party, including another birthday party tomorrow and a road race - more on that later : ) Fortunately for scheduling and craziness purposes, E's soccer game was cancelled because of the rain from yesterday. The weather really ought to get with the program and I think it finally it next week - bring on the 80 degree temps - please!

Next week our bishop is in town from Ohio so Saturday afternoon should be very busy though Lee will be busy starting Friday at lunch through Saturday evening.

Then Sunday is Mother's Day and neither Lee nor I have any decent ideas for Mother's Day gifts so we'll have to come up with SOMETHING before Sunday afternoon.

Email ThisBlogThis!Share to TwitterShare to FacebookShare to Pinterest
Labels: birthday, outside with the kiddos, quick takes, swim time