It's gorgeous, no? When I asked my mom to get E a birthday balloon - so I wouldn't have to run to the store right before the party and because she was already there this was not what I had in mind... Grammy totally outdid herself 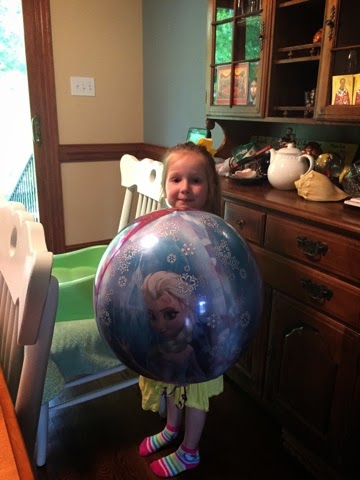 Okay but there's story behind this balloon because this is actually Frozen Balloon 2.0.

Saturday we had E's party - maybe I'll get to a recap post soonish - and the original balloon was the centerpiece of the kids table and was stuck in a sand cup. Keep in mind Grammy took off the original weight and replaced it with the sand cup. See where I'm going?

So as clean up is happening, E takes the sand cup and dumps the sand out and away flies the balloon before any adult could tell her to STOP. In true dramatic fashion - and rightfully so - E freaks out. Like freaks out. Who wouldn't? Even I was impressed by the balloon.

I'm inside and only hear the sad tail second hand. And then I get annoyed. Seriously? Seriously! That balloon was awesome. Like the best balloon ever and she let it fly away???? I tell her that was her only birthday balloon and she shouldn't have touched it in the first place and blah blah blah... #worldsmeanestmom4life

So the rest of the night I'm thinking about that stinking balloon and how annoyed I am that it flew away.

Me - She shouldn't have been touching the balloon
Lee - But she's 5
Me - But still she shouldn't have
Lee - But she didn't know it was going to fly away
Me - So... She's read Curious George enough to know he flies away with the balloons
Lee - Chicky... She is FIVE
Me - Well I'm not getting her another balloon
Lee - Well I told her I would
Me - Why?!?! That was probably a $50 balloon and do you know how much we spent on her cake? Plus they don't have balloons like that around here (only the great metropolis of Raleigh does)
Lee - Well I'm getting her another one its her birthday
Me - SHE HAD A BIRTHDAY BALLOON and she let go of it... One balloon a birthday
Lee - She's getting another one

I tend to be a stick-to-my-guns mom. If I say it, I'll stick to it. I found E snuck a piece of candy in the van and then took away dessert privileges for a week - even though about halfway through I thought maybe I should go easy on her.

After church on Sunday when we walk of of church low and behold there is a Frozen balloon waiting by the van. E is on the playground and doesn't see it but when I tell her there is something for her she freaks out - again. Only this time there is a MASSIVE weight attached to the balloon and I'm happy for E because I know the balloon makes her happy and she'll have a balloon at her chair on her actual birthday.

In retrospect I was being totally psycho about the lost balloon for some reason so blame it on the pregnancy hormones and move on.

Thank goodness for Grammys and Papas who can see past the craziness...


Moving on to happier things...

All E has been talking about for her birthday is Frozen Legos. I didn't want her to get her hopes up about them because they were sold out of a bunch of places for a few months so I told her we might not be able to find them. E insisted R get them for her.

Well E got 2 sets of the Frozen Lego castle at her party so R gotten beaten to the punch... Since we give family gifts on actual birthdays.

So after the ballon incident, we did not want a riot so we let E have some time with the gift she has been talking about for months... 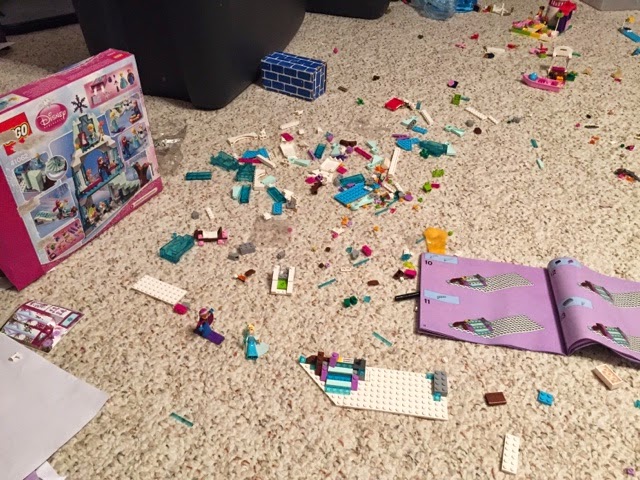 She got surprisingly far into the directions for someone who is about to turn 5. She likes to skip ahead and not go step by step - which is a terrible way to put together Legos if you are on the slightly OCD side like E.

Sunday night we spend some with the directions and going step-by-step to get the Frozen castle complete! 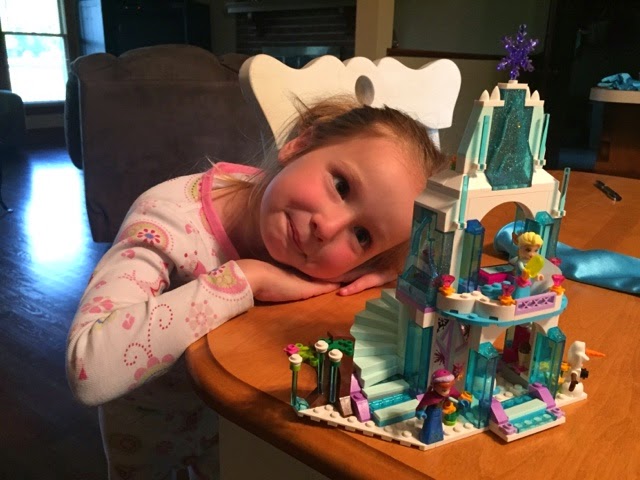 For show-and-tell of course!

And it survived the trek into school. And its a good thing she took it because now show-and-tell is over for the year.
--- 3 ---

Rewind back to before the Frozen castle was complete to about 7 hours before and this happened... 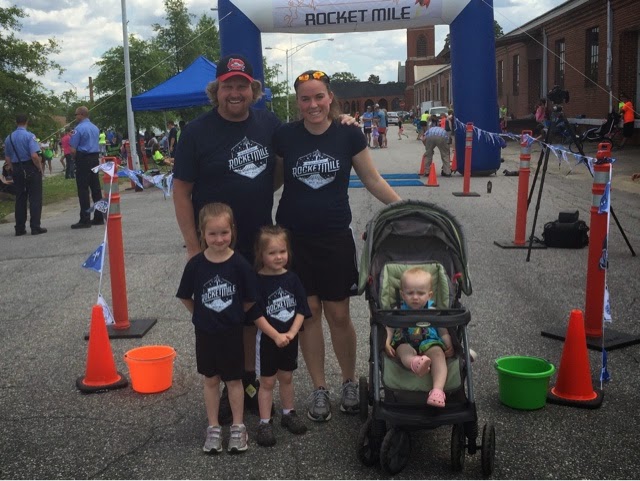 Oh and I was reading the rules (top 3 in each age group get a medal) and I think I might have even placed 2nd in my age group so I might have something in the form of the coveted medal waiting for me somewhere. I've got one more year in that age group and then the 30-34 and 35-39 and even the 40-44 age groups are much more competitive so I'll have to A. step up my game and B. not be pregnant - but since I cannot guarantee either of those in future years I'll be happy my age group had only 4 participants : ) 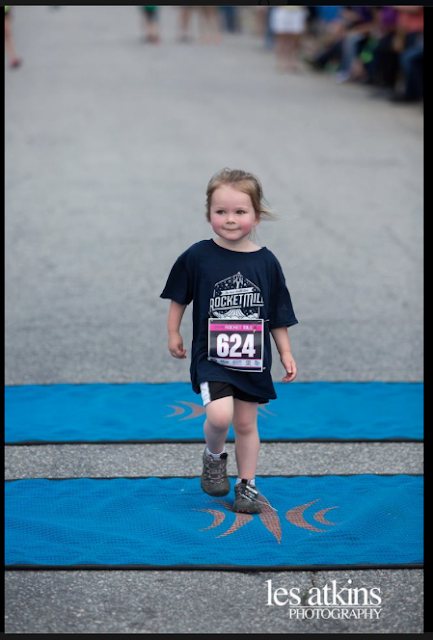 This kid finishing was worth it and I enjoyed every minute of walking and chatting it up with her... And the pregnancy hormones rage on. Oh and Lee is in the doghouse for not getting a pic of E finishing and I haven't found a professional one either : ( 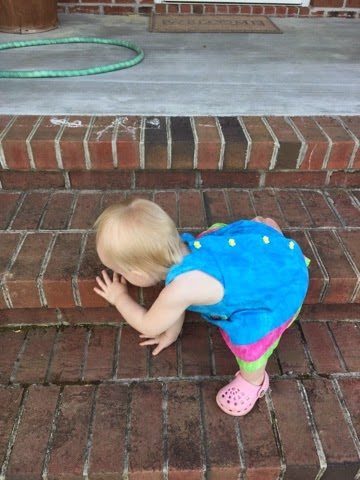 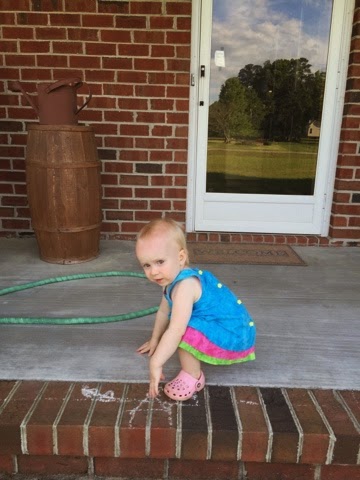 Fortunately she only has a few bruises to prove it...

E got a new Elsa dress for her birthday... 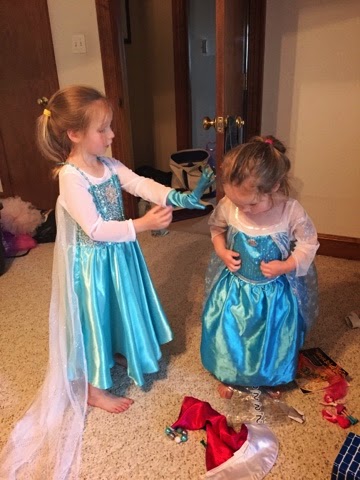 Which means E and R can FINALLY dress up as Elsa together. R for whatever reason never complained when E commandeered the Elsa R got for her birthday... 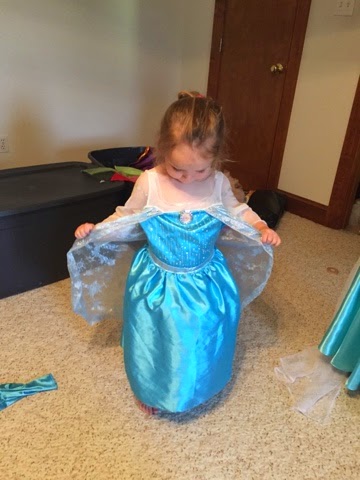 Trying on HER Elsa dress... Probably the third time she's worn it in 3 months - no lies 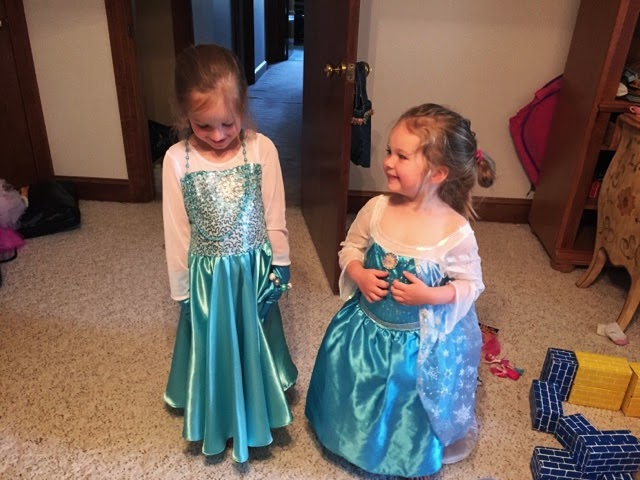 Why does everyone love Elsa anyway? Anna is the one who saved the day!


Mother-daughter selfie at the Mother's Day Breakfast at preschool... 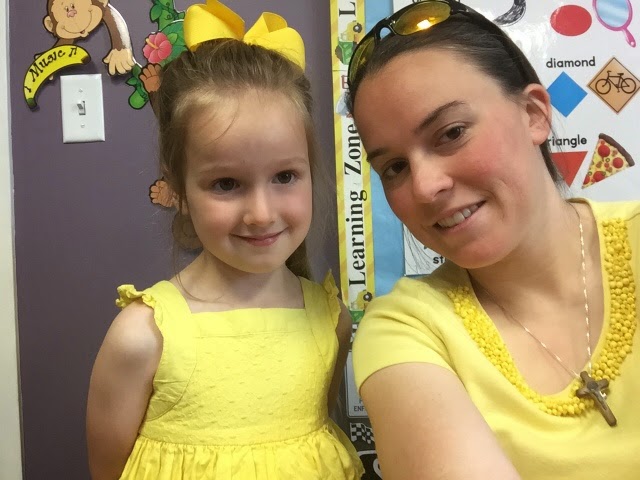 Yes we are coordinating because A. we wanted to be fancy (Fridays jeans are my work staple) and B. E HAD to wear my favorite color... 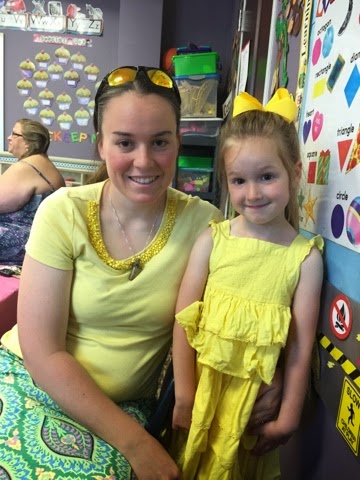 I was so stinking worried I was going to have a catastrophic hormonal moment during the breakfast in front of a ton of moms who I really don't know - because you know that's happened before and my friends still happen to mention it occasionally.

Oh but I didn't but I almost did.

Apparently E thinks I'm 60 (there was an apparent 90 yr-old mom in the class) and her favorite thing to do with me is 'activities'...

In other news.... We/I are joining a pool this summer which I am super pumped about because that means E and maybe R can do swim team. Swim team was a staple growing up. Now you may wonder why a family deeply entrenched in the pool business would need to join a pool...

Because when your husband spends 50-65 hours a week during the summer around pool ain't no way he's going to be spending any free time around his own pool (which we don't have) let alone cleaning/maintaining it for 30 minutes a week.

Hence the 'I joined the pool'... Lee left the decision up to me because I have been warned to not expect him out at the pool - though I have confirmed he will come to swim meets. : )

Finally, our bishop is in town today so I am around to round up the troops and get everyone bathed before heading to Liturgy... I'm sure I'll post a few pics from that because the girls have been SUPER interested in everything the bishop has been doing since he got here yesterday.