Possibly the craziest week to date or maybe just of the fall...

Let's just recap the crazy from the past week just for good measure.

Monday - M's soccer practice which E came and helped me (because getting soccer balls out of the net is SUPER complicated for 3 yr olds). Shoot back to school for HSA meeting and present on our Annual Fund drive which I am co-chairing (many hats I tell you), load up the crew and do the bedtime thing at about 7:45 sola because Monday is... Bible Study for Papa

Tuesday - (probably my easiest day) - Papa and E take dinner to the gym/swim practice  lies... that's what they usually do. Skip swim practice because of the mock meet later this week and do vespers for the Exaltation of the Cross (behavior was so so so terrible and A screamed screamed screamed) AHG only after family dinner. I get the run down on what they did but I think E was way more fascinated by the scissor edge designs she cut out on her paper than what they actually were working on 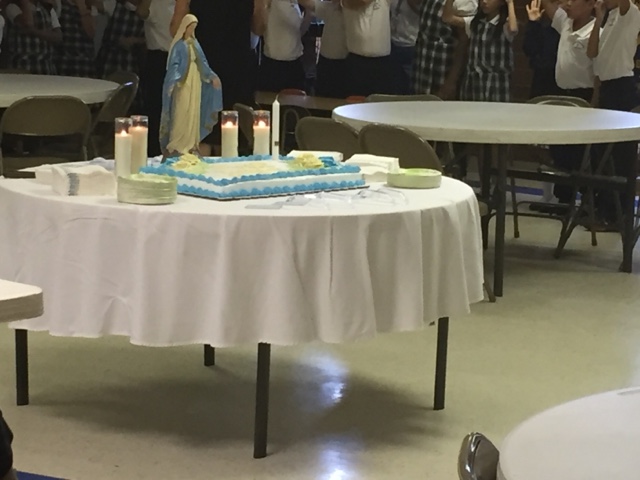 I'll throw this in from last week (because I'm that behind but I certainly don't want to forget how this played out) so we stayed for school Mass for the Nativity of the Mother of God. It was either A. stay for school Mass (Papa was deaconing) or B. drive to Raleigh that evening for Liturgy. I picked option A and stand firmly by it even though A was a loony tune, M wanted to chat-it-up and R (thanks to a small village of mom friends - THANK YOU) made it through. I was so so so so so so so so so ready to go but then there was cake (because what's a birthday without cake?) so we stayed for that and M LOST IT when she didn't get any blue icing. Did I mention I was ready to go? Finally we loaded up and went to preschool a mere 2.5 hours tardy.

Wednesday - Papa and E to gym/swim practice. Me and the three littles get dinner organized and in the cooler then we load up and head to soccer practice for M (I moved up the Monday practice to make the HSA meeting so and that only worked for half the team so I said what the heck and had another practice which was good for the other half of the team plus we have our first game soon!), Papa and E show up at the park and I pass of dinner and R and A. Then R has tee ball (in the same complex) so I pick up E and A AND find out I somehow left the hummus part of dinner in the frig #winning but I did pack the knife for it so I totally dropped that ball : ( but the kids HATE the white bean hummus I got, so it was probably better. Anyhow, we get home and it is PJ, teeth and homework time... Then Papa and R roll in from tee ball 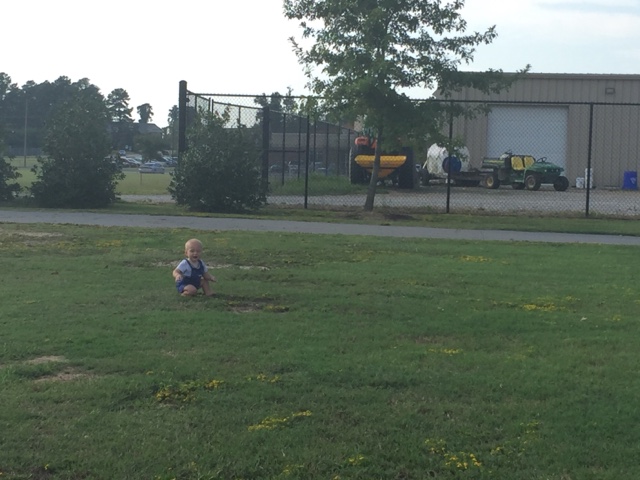 This is also from last week. The littles and I found the lifesaver-of-a-playground that is right by swim practice. Papa has had some crazy work afternoons so taking E to practice has not been an option. There are swings in this park and a playset A likes to climb on and a massive one that R loves and M is scared of the slide. It is awesome because we are outside and spending time together : )

Thursday - Lunch with Nani (yay! because making time for friends is getting increasingly challenging), gather E from school, stop at grocery to get drinks for swim meet, go to library - try not to clear out the Rainbow Fairies books (E noted that she's 'into the sports fairies right now), go back to work for a minute, feed A an insanely late lunch, quiz E on spelling words Tiasday Tuesday Tuesday Tuesday Tuesday Tuesday, go to mock swim meet. A was a WRECK. Screaming, crying, sadness most of the time, he did enjoy several bouts on the lobby floor and tried to figure out how to unplug the soda machine. Go to social after the meet. I met some parents. E met some friends which is so good because she told me she was worried kids are going 'to make fun of her' because she was 6 and swimming with 7 and 8 year old (meaning.... she knows she's not going to be the fastest)

Okay that was a lot so I'll try and be less wordy... 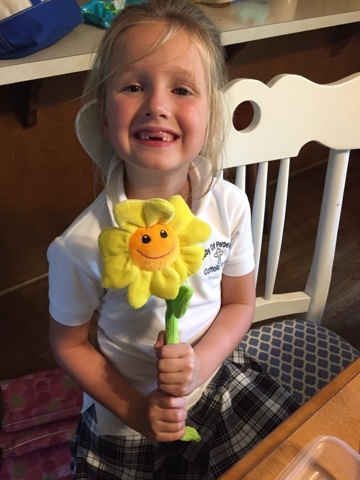 E is soaking up first grade. The transition from half day preK to K last year was hard for her I think, especially in the beginning. This year it just seems easier because she knows the drill with spelling and a page or so of HW. She is super into doing AR and she is so into the Rainbow Fairies. She is already is planning on getting a fairy book when she gets to her 10 pt mark. She ran downstairs last night to show Lee and I which one - Skylar the Fireworks Fairy - from the index of one of the books we got at the library. UPDATE - Skylar book is on the way...

R is loving loving loving preK. She is still super shy and quiet (that's because she saves it all for us and of recent has had several SCREAMING fits in the van on the ride home from school. This week I made her get out of the van and walk home it was so bad - we were in our neighborhood : ) I usually get a Happy-Buck report each day. Kids earn Happy Bucks for good manners and good work and they can cash them in at the treasure box 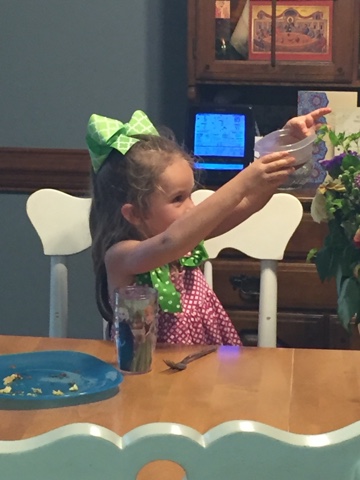 This is R seriously pondering drinking the olive juice... It was so funny to watch her think about it and see if there was just one more olive left for the eating and then put it to her lips and then finally she passed. 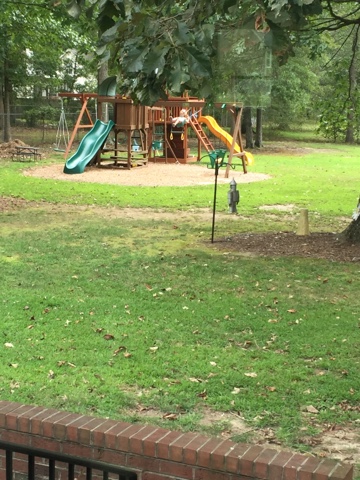 Last year R was known for going upstairs to play Legos and then wouldn't come down for hours. She was really good about playing by herself. Now I think she misses having E and friends around. But I do catch her enjoying time to herself and I think I could watch her swing on the swing for hours. She is so happy and peaceful and carefree.

M is pretty much a rockstar... 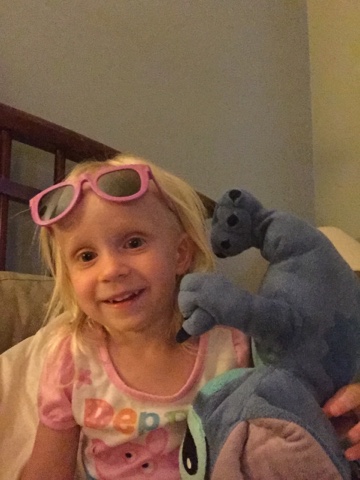 Her vocabulary as exploded since school started and she is loving up every minute of the 2 yr old class. I get a report every day and apparently Whizzy likes to eat her nack and she is NOT friends with any of the kids who wear diapers (which is quite a few since it is a younger group of 2s). 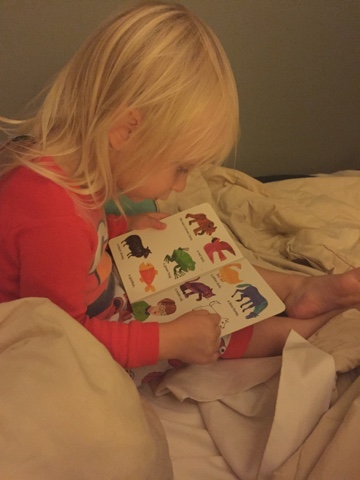 She loves to read the Bear books. It reminds me of E so much. E was reciting those books when she was 2 and I think if M was read to as much as E was #thirdkidprobs then she'd probably be reciting them as well. 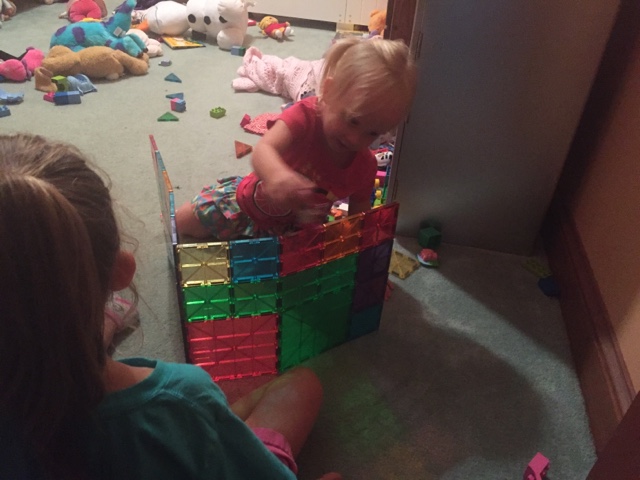 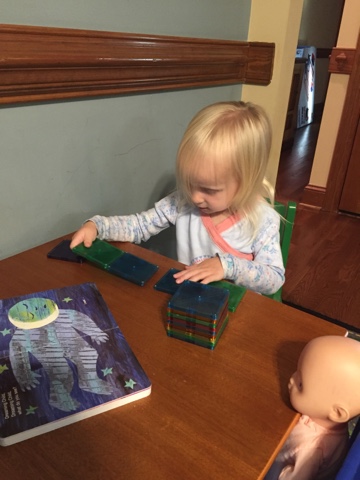 So great and she cannot get enough of them. She's convinced she needs another pack or two to make her castles bigger

A is still crazy as usual. Just in the last day he seems to not be a screaming lunatic when he's around me (which I REALLY appreciate) 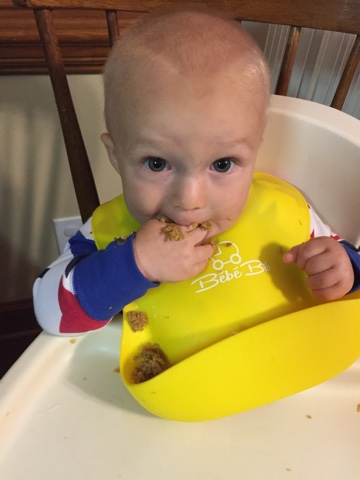 I was betting he'd be walking by his birthday (which is about 2.5 seconds away) but I think I'm retracting that bet.

Lee/FDJ (I feel slightly more inclined to use the Papa Deacon name when referring to church stuff) is getting more involved at the school this year. Last year there was some paperwork that needed some attention but this year he's in the trenches and at the pulpit. Now this is cool... 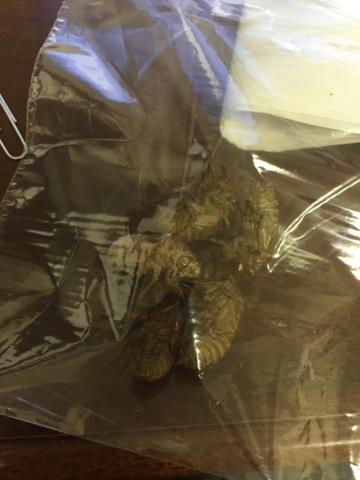 Now how he actually tied it together I don't know but Nani came through with some exoskeletons for the visual aspect and that's about all I know.

A fresh calendar just waiting for the markings... 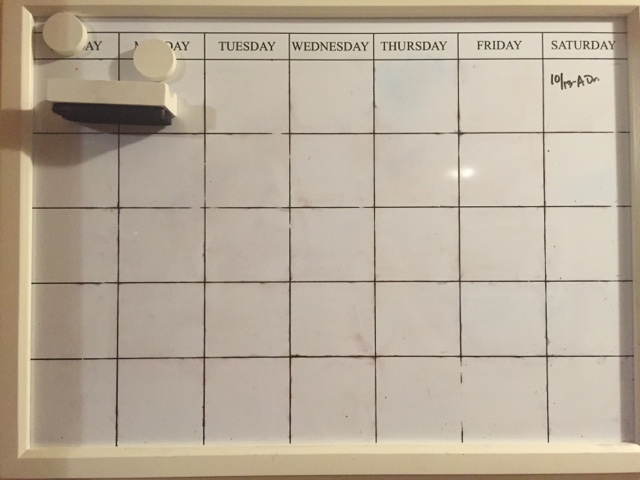 This week is bound to be wild and crazy with the first soccer game and first tee ball game and first swim meet next weekend with the normal crazy and an added day off of school and HSA committee meeting we are in for a treat!

Email ThisBlogThis!Share to TwitterShare to FacebookShare to Pinterest
Labels: Hurricane Kibbe, outside with the kiddos, quick takes