September 30, 2016
In the span of 4 days we all went to the games/meets for the girls activities for the fall.

E started us off with a swim meet last week. Of course she swam summer league and that was all fine and great but the year-round is a bit different. First, the 6 and unders are not their own category of swimmers so E was swimming in the 8 and under age group. 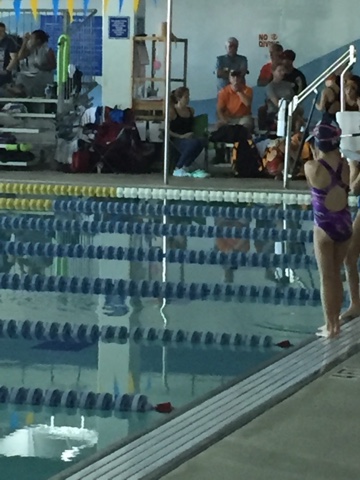 To start things off she swam in the medley relay... Nothing like starting off with something you've never done (there aren't relays in our summer league). She did great and has since declared she really likes doing relays. 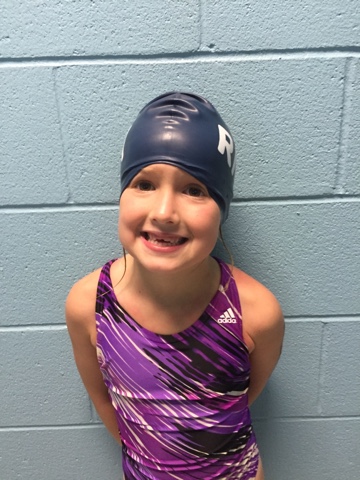 I didn't really see too much of her on Saturday because you know - R + M + A = locos. And Lee was timing in one of the lanes which I think he'll be a perma-timer for all swim meets he goes to in the future because A. awesome view B. it helps pass the time 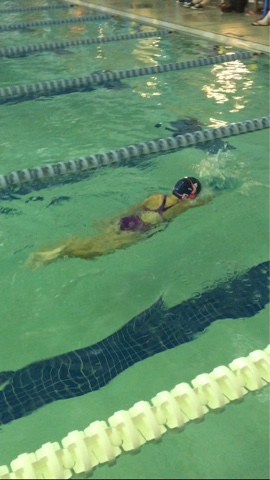 Let's see on Saturday she swam the 50 Back and the 25 Free and the 100 Free because she'd likely get DQed on breast and fly (but she doesn't know that part). Back is her favorite and after the 100 Free (4 laps) she repeated asked me why I signed her up for it. I was proud of her swimming 4 laps and having a good attitude even though the other girls finished well ahead of her (she did still end up with a ribbon for that event). 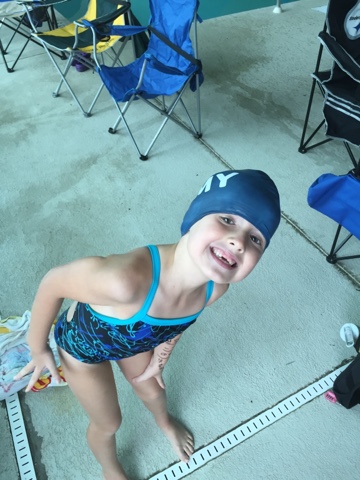 Then Sunday was the second half of the meet thanks to Saturday evening Mass and Grammy coming to watch the gang of three - oh and the meet was held at our pool so we weren't driving across the world to get there. 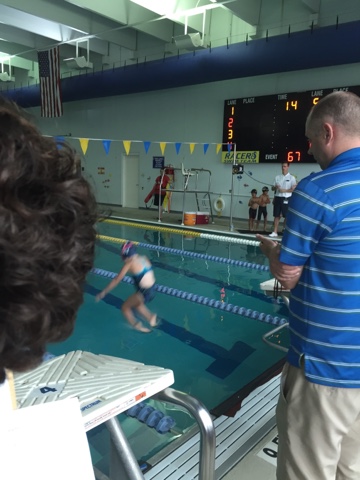 That whole diving thing could use some... ahem.... improving? : ) I showed her this pic and she says she's working on it! 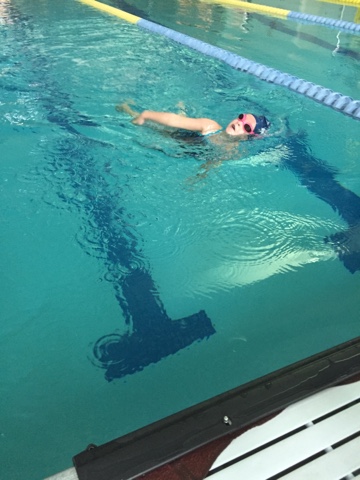 Sunday I timed in the end lane that did not have too much traffic so I got to sneak away to watch her finish the 50 Free. Then she did the 100 IM which was was ADAMANT about doing so I signed her up for it. She did get DQ thanks to a touchless wall turn BUT she has no idea she was DQed so we'll just let her bask in her IM glory because really... she was swimming against 7 and 8 yr olds. Last she did the 25 back and did quite well.

All in all check the done it and like it box.

Then Monday... The thought of the 3 yr old soccer game and I might have secretly made a face like this: 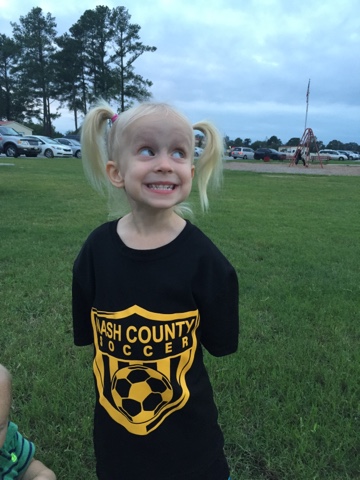 Anyhow the little penguins got it together. And did quite well. The spectators for the two teams outnumbered the players like 10 to 1. Which is fine because 3 yr old soccer is a hilarious cluster of kids running down the field, coupled with a few kids crying and another few geologists searching out rocks. 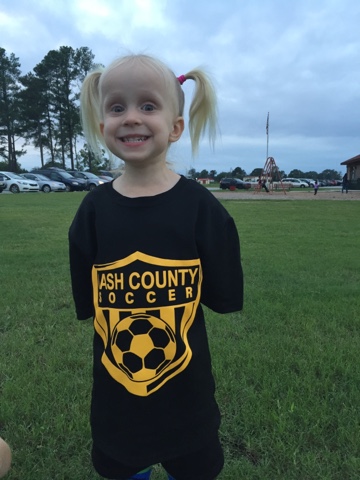 So M scored not one but two goals in her first game. We were shocked because E didn't score her first goal until she was 4 and R has yet to score a goal in her 3 seasons of soccer. So M who is not even 3 had a cheering crowd of people twice her age (Hi Lemus' and Crockett's) did not disappoint. Anyhow we owe her a trip to the ice cream shop which we didn't do that night because Papa had Bible Study and me plus 4 kids at ice cream = HAHAHHAHAHAHAHAHA. 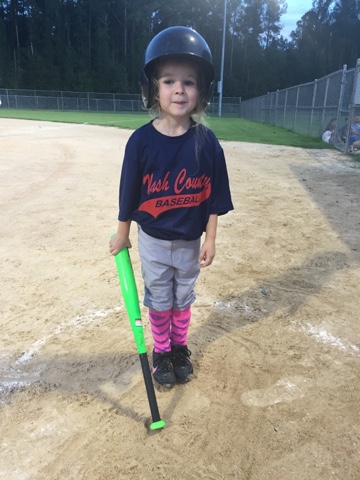 Love the pink socks : ) R had a blast playing in the dirt in the infield when the MuckDogs were fielding. Try getting 4, 5 and 6 yr olds to focus on fielding at 7 at night. It is comical. Some of the kids were way more into than other - again totally great. 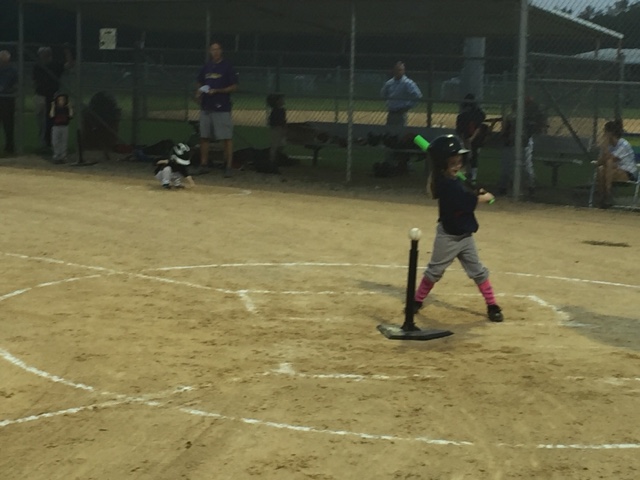 R loved batting. I think she was out on her first bat up but she doesn't really understand the rules quite well so when she was sent back to the dugout, it didn't phase her. 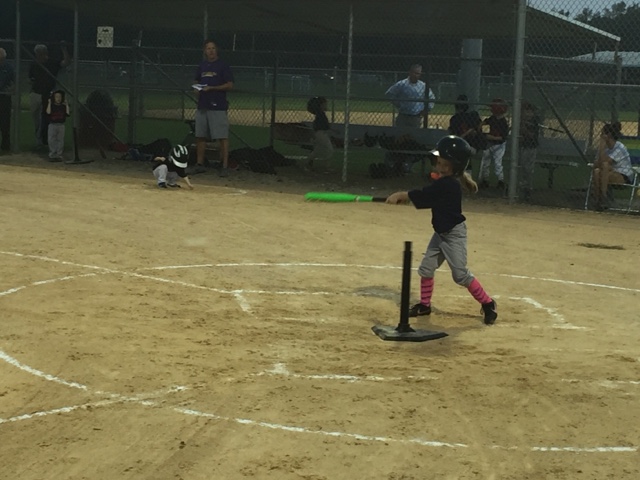 She did make it around the bases the other 2 times I think. I was on third base directing kids home and one little boy ran in a huge loop to get to third - it was awesome.