Linking up with Kelly  because I have been meaning to blog all week! 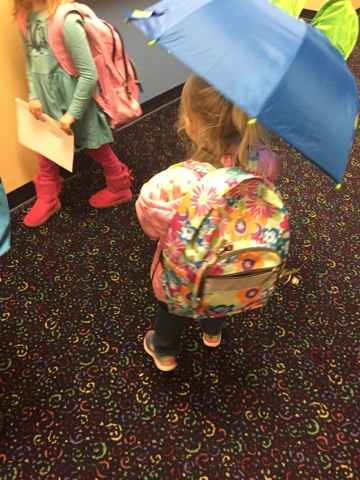 More like outfit accessorizing... but seriously M's attachment to her umbrella reminds me so much of E's need to bring hers everywhere when she was 3. R likes having her's too but M freaks if she sees a droplet of rain and doesn't have it.

A scored a bunch of toys with wheels for Christmas... 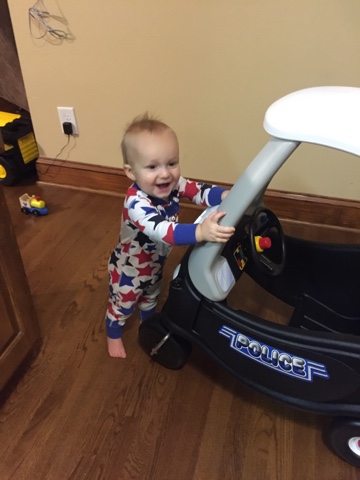 I mean we probably didn't NEED another Cozy Coup but I'll catch E riding around in the one she got for her birthday so many years ago I figured A might like to have first dibs on his own. We are keeping it inside until the spring then it will live outside but for now and enjoys his set of indoor wheels.

After Christmas break someone had a seriously battitude EVERY SINGLE MORNING. Whining. Being slow. Generally unhappy with the world. So one morning, everyone else was ready to go and someone was still packing their bag and complaining about her book bag being too small so I said see you later and pulled out of the driveway. Then when she emerged from the garage, I closed the door and slowly headed to our stop sign (no terribly out of the ordinary... I have done this a few times in the afternoon if we are running on the later side for swimming - usually she catches me at the mailbox). Well on this day she was going snails pace. So I got to the stop sign and still walking... Not running or making an effort so I started (not as slowly) up the hill 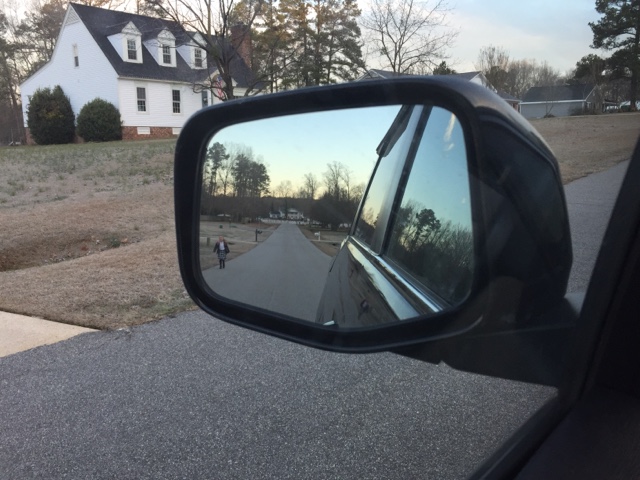 That's when I finally got a running reaction and I think it set in with her I could leave and she would be left without Papa at home or another option to school. So I slowed down and she started walking again.

Two can play the game girl.

So I sped up and she started running and there may have been some frantic tears and she caught up about halfway up the hill.

Although I think there were some other attitude/schedule adjustments going on that week, she's been in the van (last) for an on time since.

Speaking of on time departures... 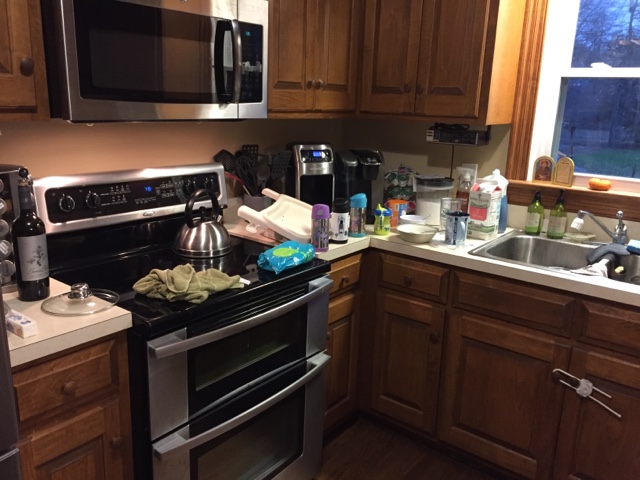 This is what you get the next morning when you go to Theophany Vesperal Liturgy at 6 pm on a school night at your church one hour away. After the Great Blessing of Water, I think it was nearing 8:45. A was a miserable WRECK for the greater part of church. I was so so so done. Then it was time to eat dinner? Yes. Lee didn't want to get the salad out that he made so I did and then there ended up being none left - #trustthewife. There were homemade chocolate cupcakes that made everything just a little more manageable. 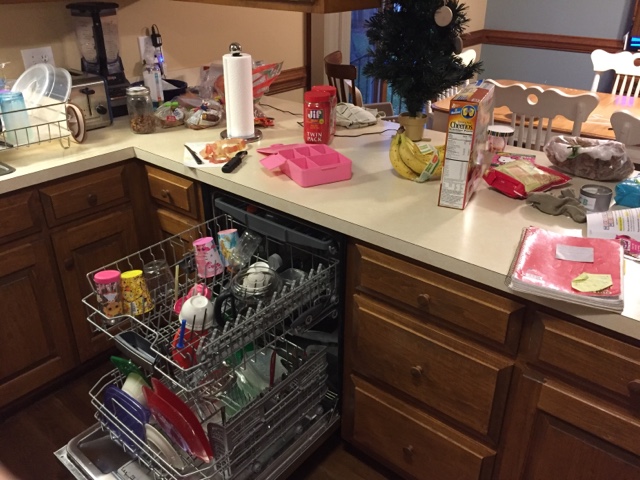 I don't think we rolled in the house until about 10:30 that night so I knew the next morning was going to be kind of a joke. We were only 15 minutes late dropping E off - and then I picked her up right after I collected the preschool peeps because A. she was tired, B. there was a funk going around a few kids in the class, C. it was going to snow later, D. I didn't want to the snowed in with kids who had the funk. I was actually kind of proud of myself for doing that because I NEVER EVER do early pick up just for the heck of it but maybe I'm softening up a little bit.


Speaking of the freaking funk.... 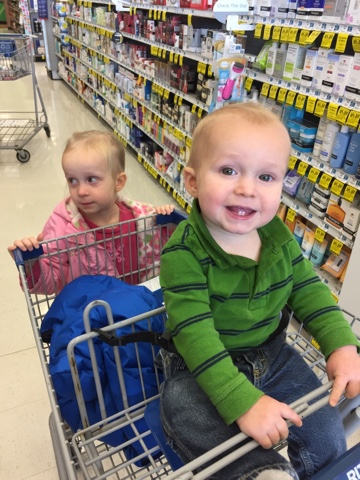 These two went to the doctor a week before Christmas. Got on a prescription and then about a week after Christmas have had constant runny (I made the mistake of using snotty in from of M and now she goes around announcing - I have a snotty nose! Still trying to correct that!) noses for 2 weeks. So after our snow - more on that later, I took them to the first doctor appointment the pediatrician had in 1.5 days. They opened at noon and we were there sans appointment at 12:02.

We are the first seen and as I guessed there is nothing wrong; treat with Claritin and move on. I have one burning non-peds question for their pediatrician....

"My throat hurts. I don't have a primary care doctor. I don't trust the urgent care people. I cannot go to the walk-in clinic (that the trustworthy practice in the area runs) because I'm pregnant. What is your recommendation?"

One rapid strep test and eleven minutes later and... I have a strep throat diagnosis. Seriously? I mean hats off to the doctor because he didn't have to do that. He did me a HUGE HUGE HUGE favor - that I will not forget. But it totally explained why it hurt to eat for the past day or so. After a not so quick call to my OB and explained I had a positive strep test and I needed an Rx ASAP because I was DYING... I got one.

This is how bad I felt though. I went to Cook out to get a milkshake because I seriously couldn't eat. The line was a mile long. Head to Chik Fil A... the haven of pregnant women... I didn't even want any food and I hadn't eaten all day. Not even Chik Fil A sauce. Needless to say one dose of penicillin later and I felt like I didn't have 20 horns growing out of my head. Strep is going down as on the same level as bad as the sinus infection from a few years ago. Although, I didn't think I was actually going to die with strep. 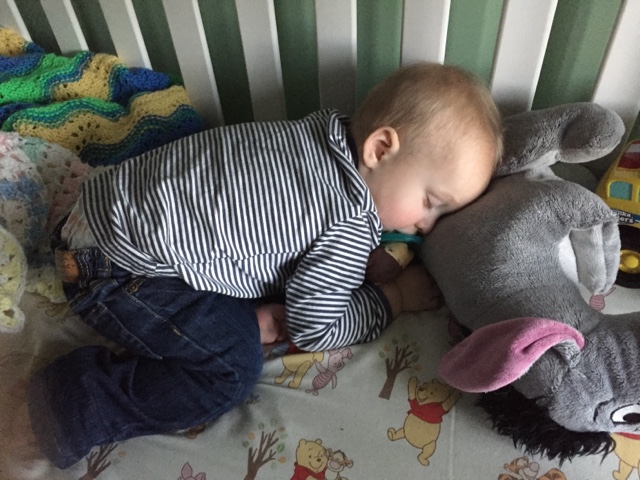 He's still super clingy to me. He'll take a few steps on his own but is generally not interested in walking. He is a picky eater but loves bananas, blueberries and pumpkin muffins. He says Mama occasionally but doesn't really know what he is saying. He loves pointing to the Christmas tree. He likes watching the ardillas and birds at the back porch. after swim practice on the 5 minute ride to Jibbe's.. The car reading lights now have come along way for sure. She sure loves her Rainbow Fairy books.

I have a mountain of things going on right now. Work trips - yes potentially multiple if I can get my act together. E's schools biggest fundraiser - if you need another 2016 tax write off let me know... I know a small Catholic school : ). Also, I had this brilliant idea for a class auction time for the school dinner dance but it was an idea without a vision. Yesterday I was kind of freaking out about it so I called in my best reinforcement and I'm feeling so much better (thank you, you know who you are if you read this!) Now, to actually get it done. And if it does get done then I might tell you about it but for now there is still a bunch of work to be done!
at January 14, 2017