Linking up with Kelly and the usuals...

M reading to A 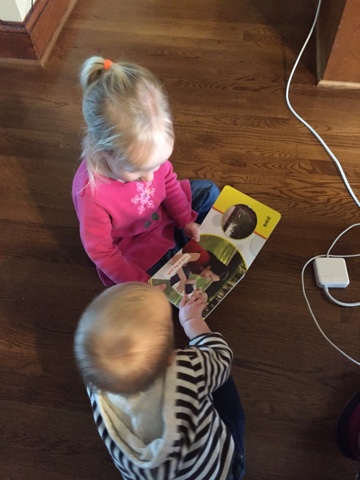 I can't say it ended well for M because A wanted to snatch the book but she was surprisingly understanding and didn't mind. They're giving books to kids as part of a reading initiative at our pediatricians office which is great however if a kid has an electronic or a book 9 times out of 10 they're probably picking the electronic soooooo.... the solution would be?

Cut the hand held and toss your kids a pile of books. Our girls do surprisingly well during the hour drive to and from church especially if they have a mountain of books to read.

The weather around here has been crazy warm - but we might get a few inches of snow over the weekend?!?!?!  (that didn't happen it was more like a few flakes) - so Papa fired up the pit and we had s'mores the night before Lent started. Our family doesn't give up desserts or TV for Lent (though they are admirable things we ought to consider for future Lents). We do our morning decade of the Rosary in the car to school (no reading for E but she mostly okay with it) and Presanctified Liturgy and Stations of the Cross and a few foods we don't eat.

The pray and fasting parts of Lent are easier for us; the almsgiving is so hard to teach to little kids - I find. Side note, funny story, so E and I went to Mass one Saturday night and the priest who was filling in did not stand at the pulpit/ambo and preach. And he's loud and animated and he's super into his homily/sermon about Lent and the gospel for the day (Jesus being tempted by the devil three times) and he comes up to our pew and he looks straight at E and he asks - what the gospel teaches us about Lent (Prayer, Fasting, Almsgiving)? She is stone faced and barely looks at him and I whisper her the answer (but I thought she knew) and she still wouldn't answer and finally after about a minute he gives the answer. Seriously, it was kind of funny how nervous she was but she wasn't having ANY of the attention. When we got in the car I asked her about it and she said that the priest was really loud and when was the regular priest going to be back. 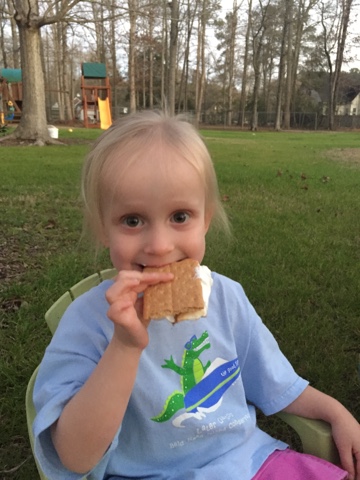 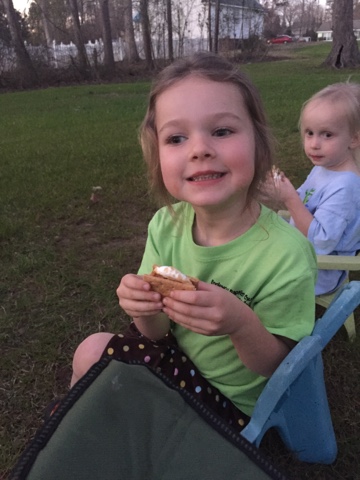 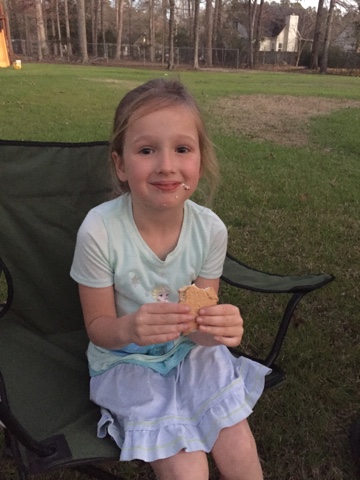 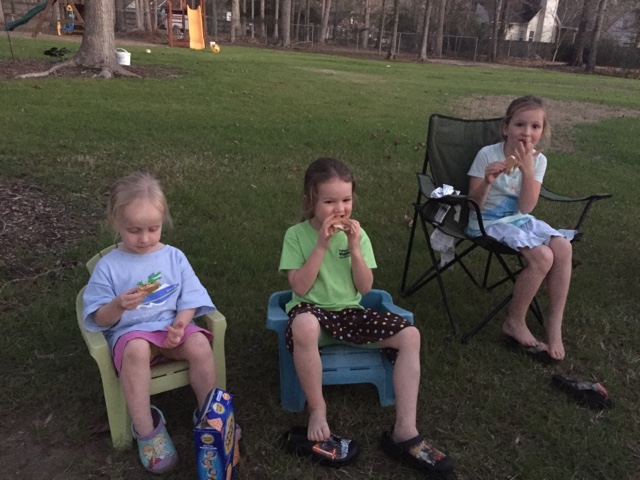 It was deemed a success 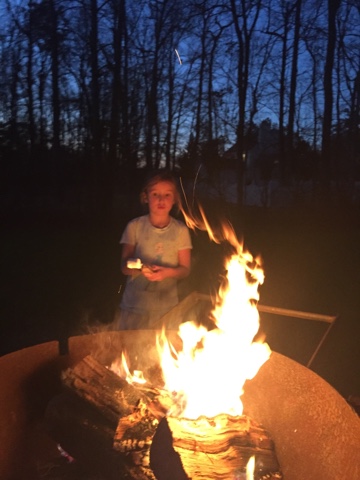 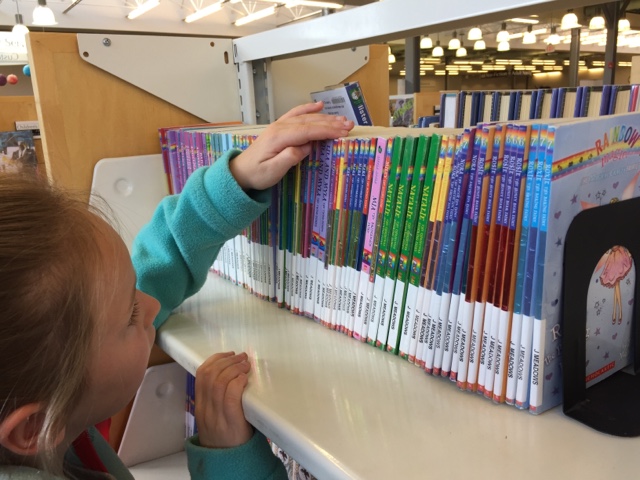 E has been into the Rainbow Fairies pretty hardcore this year. The premise is EXACTLY the same. There was a set of fairies - color, gemstones, baking, sports, days of the week - you name there is a probably a fairy for it and Jack Frost and his goblins steal the fairies magical object and the human and fairy worlds are in disarray until the two girls help the fairies get their objects back. Exact same story. every single time. It's okay though. She LOVES them and talks to me and Lee like we should know who they are. Like Briana the Tooth fairy and Samantha the Swimming fairy and duh you should know their names.

Anyway, E has exhausted the school and local library fairy books. I looked on Amazon and half.com for books (to the tune of a dollar - no luck with shipping). But Grammy's library has a good (but far from completely available) collection of Rainbow Fairy books. I took E and R one Sunday after church and they freaked out.

I think they ended up with 16 fairy books and I didn't even feel bad about them checking that many out because there were so many duplicate copies. I'm still on the hunt for a good used book store or library sale because R is 'reading' these books now too and M likes to look at the covers and discuss who is who.


E had her second to last swim meet of the indoor swim season a few weeks ago... 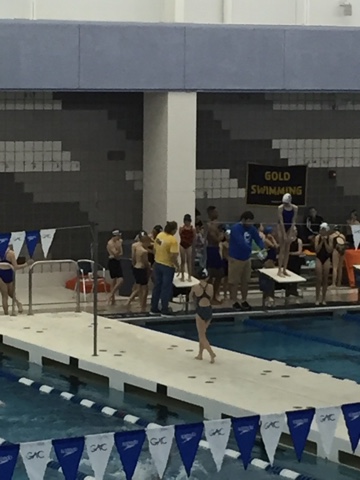 In deep discussion over DIVING off the blocks... 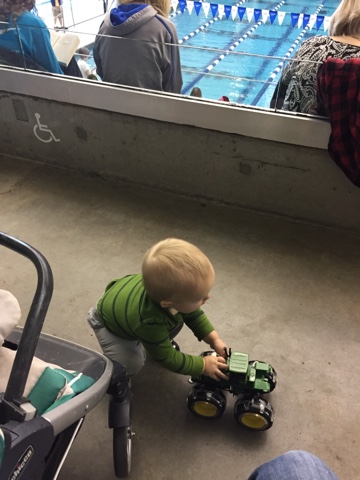 A did surprisingly well. 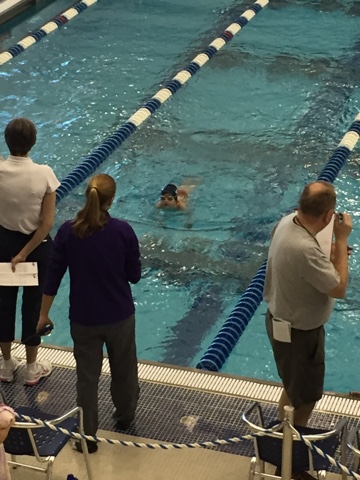 This is right about the time she DQed in fly : ( 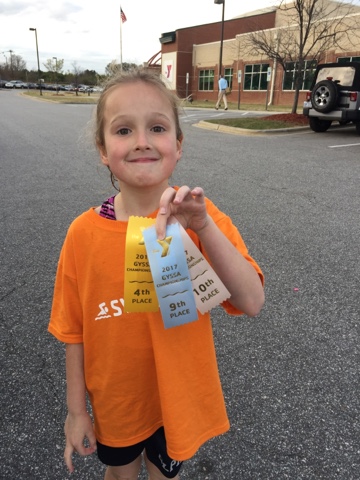 She swam 6 events. DQed in two : ( . And was half a second away from third place medal in 6 and under back (her favorite) - SHE REALLY WANTED TO WIN A MEDAL. She broke just under a minute in 50 back so overall it was fun to watch her do what she enjoys.

A loves his bath times... 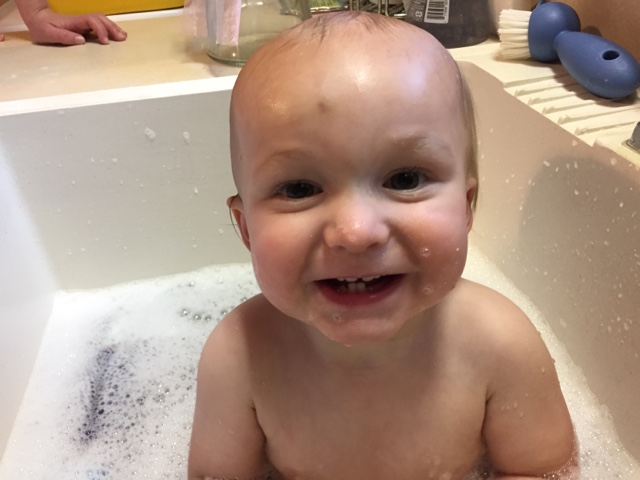 In fact last night he walked over to the sink after dinner and started banging on the cabinet doors to be put in the tub. So a quick bath it was. 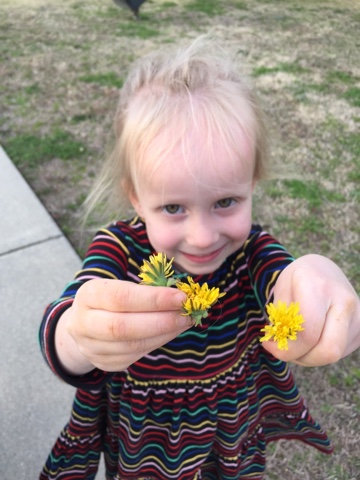 M and R notoriously take the time to pick me flowers : )

A few notes about China.

1. I made it back. Thanks for the prayers. I am grateful for the crazy and the noise.

2.  This is how A's stocking started before I got on the first flight 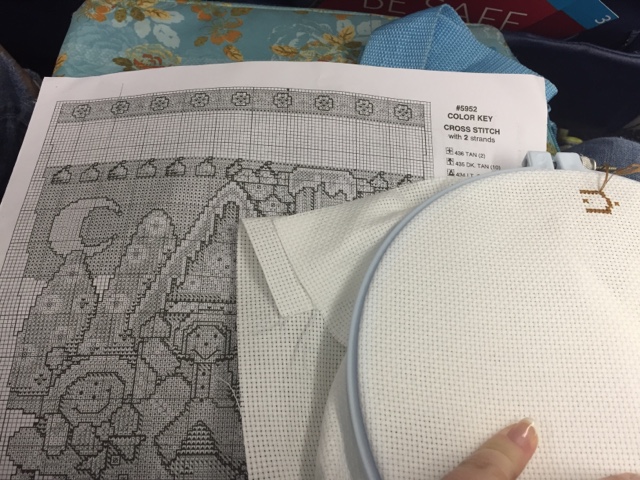 I had some crazy sleep schedule going with the 13 hour time change and long flights so instead of reading a book at 3 am I worked on the stocking! I'll have to post of the progress pic later : ( 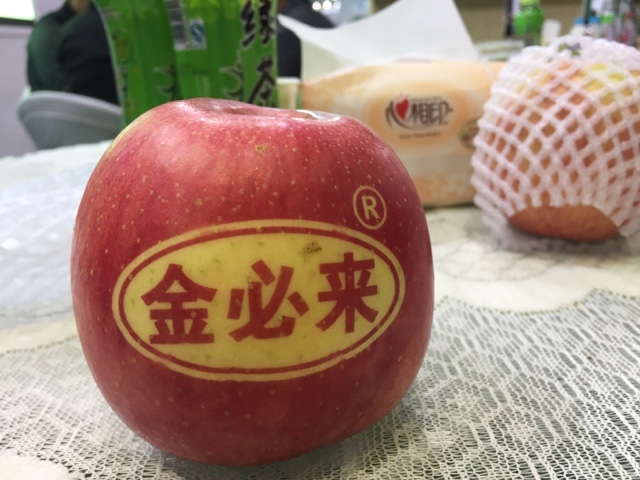 I'm still trying to figure out how this worked out. It seemed a sticker or something was put on the apple because it is branded on the peel of the apple. As if sunlight hit or didn't hit that portion of the apple? 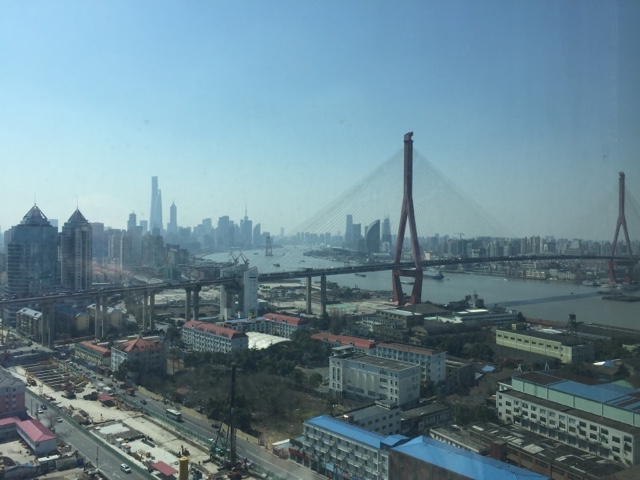 Shanghai skyline from the hotel. 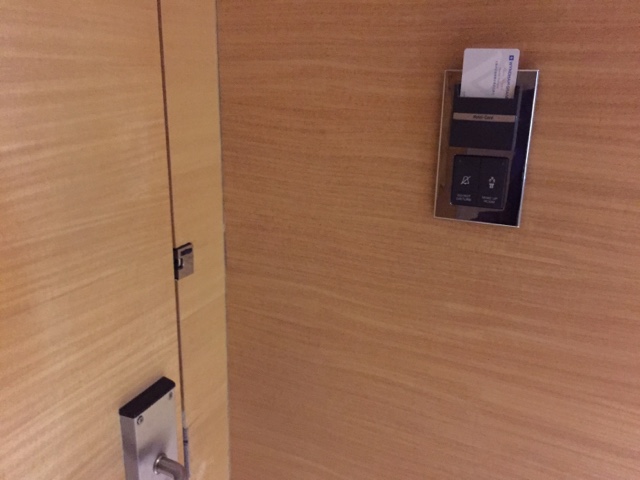 Don't forget your key. You have to insert your key into that slot in order to turn on an lights in the room. Fortunately I didn't forget to grab it on the way out because I was only issued one key 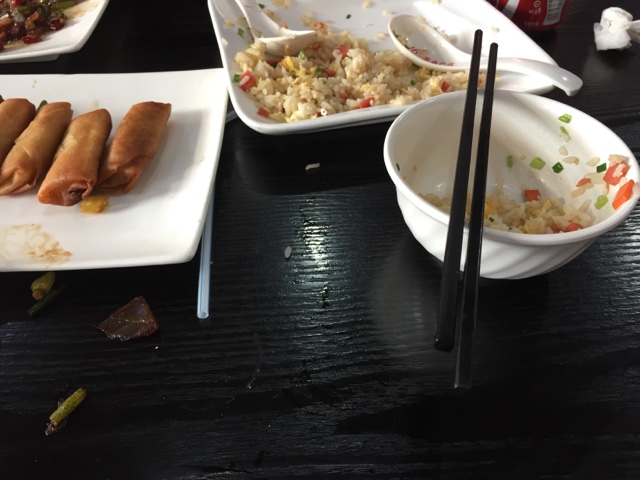 I had to figure out chopsticks really fast. At least when I was eating with someone from China I made a point not to use a fork - as slow and humorous as it may have been. Despite this pic, there was not a lot of rice served. Noodles in soup but mainly meat and veggies. I was served gelatinized pigs blood BUT I skipped right over that and grabbed something else from the massive soup bowl. 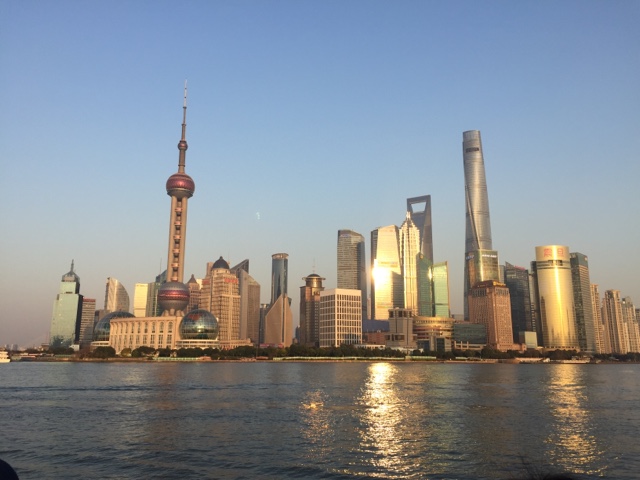 The view from the river

E went swimming with me last week in the morning 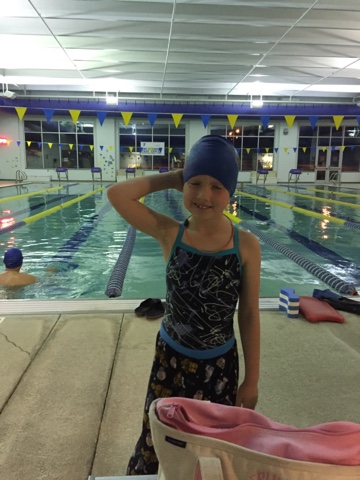 She stuck me as really grown up for some reason so I had to snap a pic. She enjoyed a splash of coffee on the way home so she was feeling kinda grown up too.

Email ThisBlogThis!Share to TwitterShare to FacebookShare to Pinterest
Labels: books, cross stitch stocking, Lent, outside with the kiddos, swim time