Linking up with Kelly and adding the necessary amount of green..

Hopefully you celebrated yesterday with lots of green! 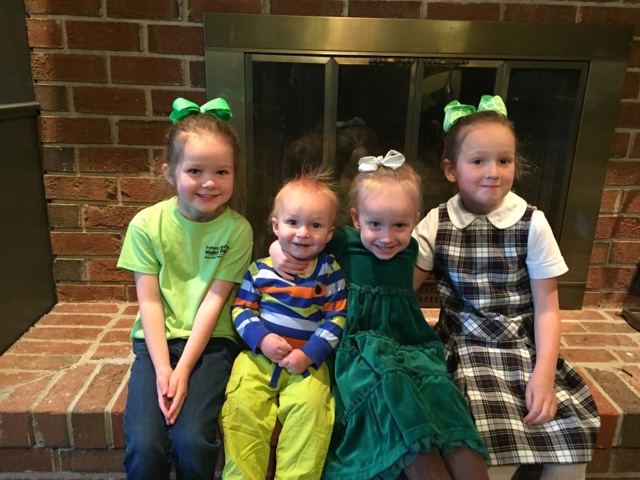 I cannot believe it - a decent 4-kid-pic!

The girls weren't thrilled about their green milk at breakfast or the green mac and cheese at lunch BUT its St. Patricks Day and I always add a bit of green to food as a reminder. So they will just have to get over it : ) 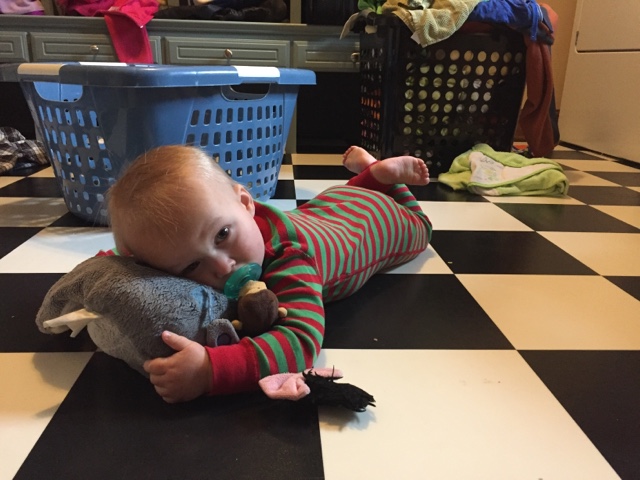 Because after a morning power nap he was pretty much fine the rest of the day.

But that wasn't the only illness of the week, I took E to the dr on Thursday because she had been nonacid off complaining of her ear hurting and school called and said she had a fever so off to the doctor to put this to bed. After one inflamed ear canal (close to the start of swimmer's ear) later and a small bottle of $$ eye drops - she's fine.

This post is going to sound like an ode to E but it's been a pretty slow week... Any ways, E's been working on a leprechaun trap for a few weeks. 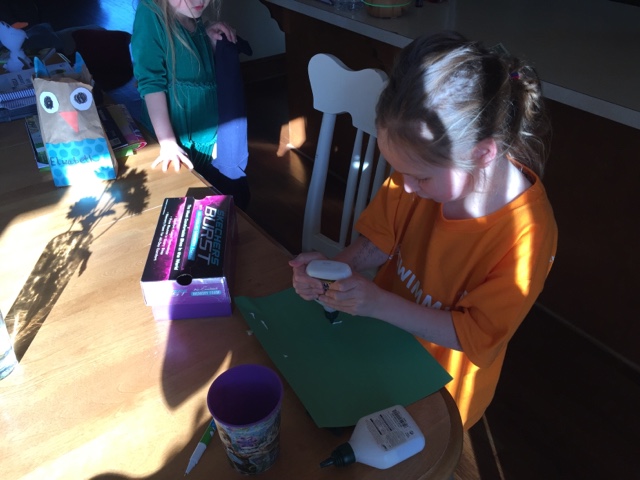 We craft in stages... 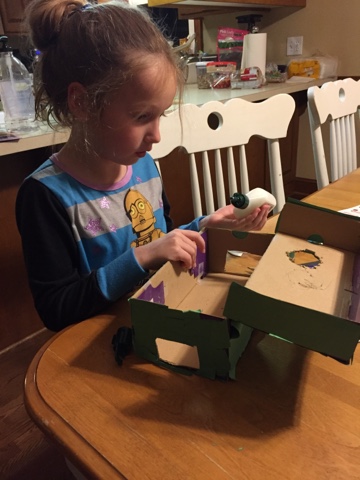 She first started off with attracting the leprechauns with candy but after reading a Magic Tree House fact checker about Irish folklore we learned that leprechauns are after gold coins - not candy. We talked about her design plans and how the leprechauns might see the coins in the shoebox and etc etc... enter the trap door and the windows. I really wanted to see how/where she'd run with it so I had her draw the cut outs because I'm still not good with handing over a pair of boxcutters to a 6 yr old - though she did make the windows bigger - which she thought was excellent. 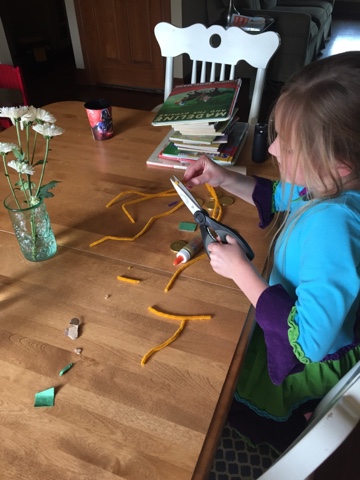 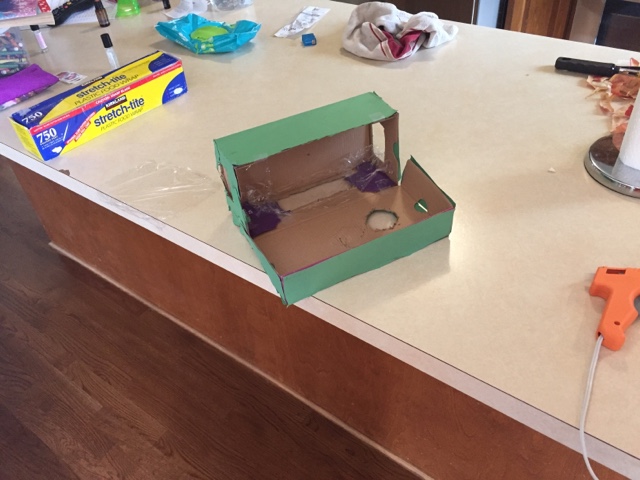 While she did that, I tested my Saran wrap and glue gun theory - which is totally doable. I wouldn't recommend trying to do it in tight shoebox corners but it worked. E trimmed the excess wrap and I was pretty sure she was going to punch a hole in the Saran before she turned it in 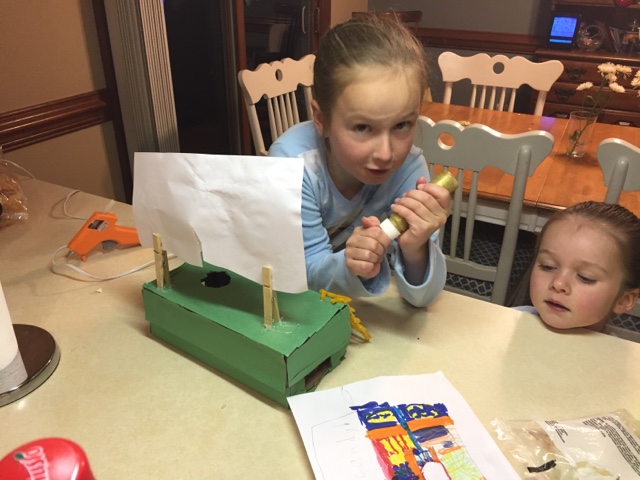 A sign and a gold path were the finishing touches 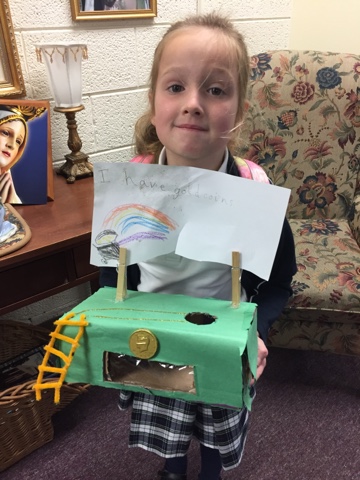 The finished product. Unfortunately, none of the traps caught any leprechauns yesterday at school. The leprechauns ate the chocolate coins E had in her trap and busted out one of the windows....


E hit a big milestone in AR points and I told her she could either go out for ice cream or order a new set of fairy books... I thought she was going to be sold on the ice cream and we all lost out when she chose the fairy books. 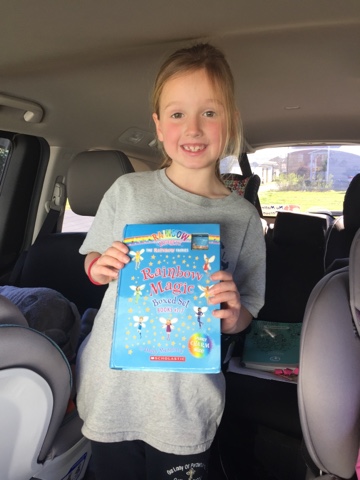 She's downed these 7 books in less than 2 days!

Lee's been cooking like crazy for a big school fundraiser... 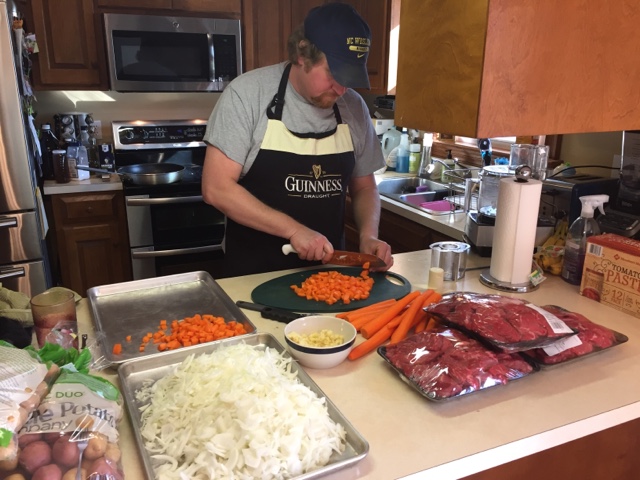 Veggie lasagne, Guinness beef stew, Shepherd's pie, corned beef and cabbage, and roasted potatoes. The kitchen has been overflowing with food and great smells. Next weekend it's sausage making weekend for our parish fundraiser which is icky and gross to me so the kids and I will have to evacuate because I can't stand it.

Wednesday we survived our first pre sanctified Liturgy of Lent (I know scandalous given this was the 3rd week)... with China the first week and Lee giving a Lenten retreat at the parish here the second week - it just wasn't in the cards. 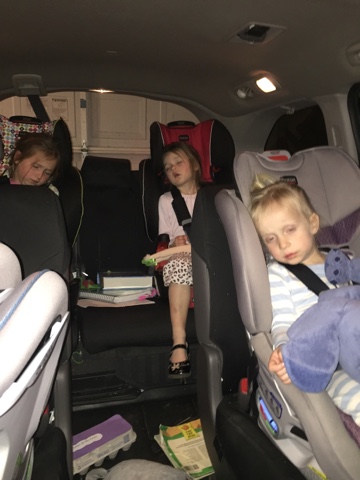 The kids - even A - did mostly well. E was in a micro-managing mood so I got reports on who was doing what.

We also hit the Fish Fry and Stations of the Cross here last night (for the first time). E sat in her own pew in the front - and always does a million times better when she's by herself and not distracted. R did awesome too - which I've kind of been waiting for to step up her behavior game. Still wouldn't trust to make through all of Mass but with the standing and kneeling and moving for Stations I think it makes it easier. M and A weren't terrible so props to them. A destroyed a Stations booklet so we have that to tape up and use next week. He found the Holy Water so between that and the prayer cards that he went up and down the pews taking out of the holders, he was actually pretty quiet. Thank goodness we didn't have to go outside because it was FREEZING.

I'm learning that parenting is so much about patience and I am trying to embrace the need to be more patient but it is hard. Maybe adding another baby will slow things down some and cause me to stretch and add a little more. patience

But until then... We will par the course and carry on with the crazy like always 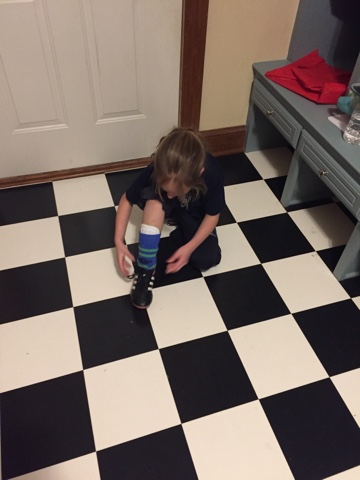 Spring sports is starting up - there's only a few weeks over lap with the end of swim season. Thank goodness the practices are 5 minutes away because everyone is on a different schedule. I'm not coaching E's team this year which is new but good. I think its good for her to learn from someone else plus I couldn't do a good job if I wanted to given the fact I might have some or all kids in tow because spring pool season is upon us and St. Joseph seems to be taking care of Lee in the lots of work department. R's doing tee ball again but the wacky cold and rainy weather has canceled the first week of practice. M starts her soccer next week. She's decided to be the purple Ducks. I'm coaching her little team because I enjoy it and I feel pretty good about Lee being there most days and E and R are pretty self-contained and A cannot wander too far because he is super into every single ball there is in sight so he'll probably stick right with me.

I'm actually kind of excited about the spring season of activities because they really force me (and Lee) to stay on dinner schedule and have a plan and stick to it. Yes, there are some late showers and meltdowns but everyone learns a little bit of sacrifice for another person.