Linking up with Kelly ... I really have 2 weeks worth of stuff to post about but this weekend merits its own post so here goes... (without a zillion pics)

Friday (evening) because that's pretty much the weekend right? The kids played outside with the neighbors for a good while and when Papa got home at a (reasonable?) 6:30 he went back out for pizza and (local) beer while I rinsed the kids and gave them dinner because they didn't want to wait for pizza.

Breakfast for dinner is awesome especially when there wasn't milk for breakfast.

The girls decided on Pinkalicious for their show (I'm so glad E still enjoys cartoons) and earned a second show after sorting and prepping their laundry.

Lee and I enjoyed a beer and pizza date night on the front porch as it wasn't too hot and there weren't too many bugs.

Saturday was cra^zee and it started off with Papa and E heading to church. It was first Communion Day for 2nd grade - but not for her because our kids our baptized, confirmed and given Communion in one fell swoop. But she wanted to go support her classmates. I really hoped she didn't feel like she was missing out because it is such a big deal for the kids in her class but being Ukrainian Catholic is something we think/believe/pray is the best thing for our family. Being a parent is hard and involves lots of decisions...

Sooooooo...... that left me and the four younger peeps to do a Sams Run. Which was more involved than normal because we lived out of the freezer this week because Lee was down for the count last weekend with some sort of stomach bug / food poisoning that last Friday-Sunday afternoon.

We stocked up on a bunch of essentials and barely made it out the door the cart was so packed and I was totally off the mark on my guess of the total bill but ce la vi.

After a quick pass through for lunch I took M and C to a birthday party for one of M's friends. We really have a 50/50 birthday party chance rate. And I'm okay with that. We can't do it all (though this weekend I think we did do it all). M hadn't been to a b-day party in a while so it was kind of her turn.

Then Lee met us with the other kids and we went to another birthday party. This one was for one of my co-workers. We would have liked to stay longer but Lee had 5:30 Mass homily duty to attend to and E had her last soccer skills clinic...

This time for a friend in E's class for his first Communion. The food was amazing and the company was even better. A had a ball and loved riding on the golf cart and the big girls enjoyed not being terrorized by A. Oh and the cake was gorgeous.

We finally had to cut the evening off (I want to have commune of all the people I love hanging out with so we can just walk) and I think we rolled in somewhere after 9:30. I'm surprised A and C were still awake when we left but they weren't when we got home.

Such a fun day that didn't have any soccer or tee ball games because that would have been hairy!

This morning we woke up at a very late 6:45 and wondered when the kids would emerge. We had a semi-leisurely morning since we weren't traipsing up to Raleigh. We went to 9 am Mass. A and C made it through the collection and then we had to head to the back - but only the back pews not outside or anything - so I was impressed. R's Mass behavior is definitely better (hi weekly school Mass) and M's behavior could be better but she is 4 sooooooo....

We hit D&D for donuts after which is fun for me because I remember bagels and donuts after church on Sundays growing up.

Then we had to go to Lidl because there were a few things we couldn't get a Sams plus there were little blow up pools on sale (those will be way cool when I have my plan of setting them up) and I caved to $5 goggles. Each big girl pushed her own cart and all was well until we loaded up and R was melting down about not being able to carry a bag etc etc etc.... She was tired and there was so much more to do today. 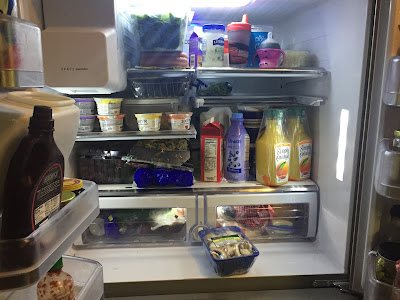 Lee got home from the 11 Mass and was home for 2.5 seconds and then we had to load up to the ever exciting Rocket Mile. This is year four for us (family) - last year for various reasons Lee and I did not do it. Lee had us convinced he was an unhealthy scratch for the event but he (thankfully) decided to play along. 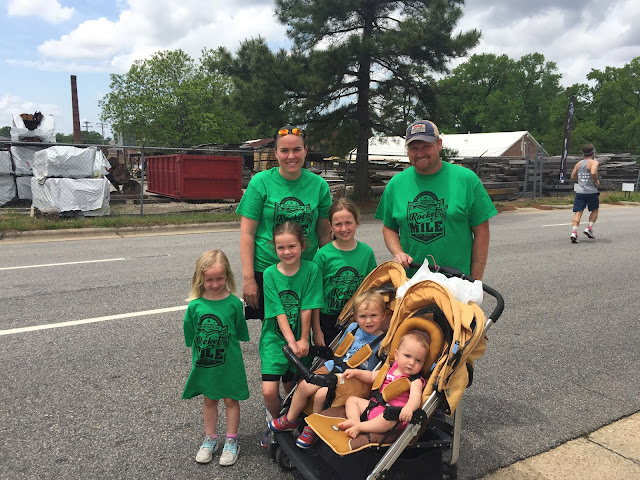 The goal is always just finishing especially after last year and the tears. Next year it will be finish and have fun. Lee did great and showed all the kids he is a team player and time doesn't matter. I didn't do too bad considering I haven't ran in ages.

E did well and may have improved her time a bit

M ran for most of the race (I was only with her about a third of the race - see below). A Webby's Sno-Ball was on her mind. Very proud of her

R... wellllllll.... she finished. She got a stitch in her side and M and I caught up with her not long after the 1/4 mile mark. She walked a bit and jogged a bit and whined a lot and we took deep breathes and she was in a mood and she saw M was beating her which was just salt in the wound. Had she kept running she would have definitely caught M because R is a good little runner (when she wants to be) but R would have NOTHING of it. People tried to cheer her on and cheer her up but she would have NOTHING of it. NOTHING. She stomped her frowny face across the finish line. (and came in last place - which she knew)

Such a different turn of event from last year because I was so hurt for R since she didn't get a medal but this year I was so disappointed for her because I know she could have done way better had she had the right frame of mind and probably more water to keep that stitch away. She got home and decided she was going to do better next year. Sigh, sigh sigh!

Lee took off with A and a screaming R to get a few last minute items and C, E, purple mouthed M and I were close behind. 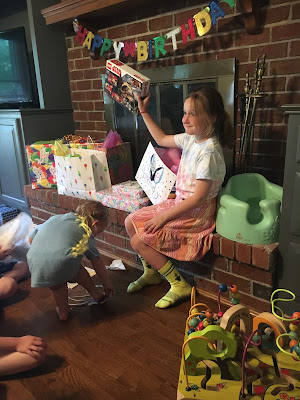 E's birthday is always so hard to schedule because it is the second week of May and that is one of the crazier pool season weeks and Mothers Day plus toss in Ascension Thursday this year and that blocked every day out this week.

So Lee and Grandpa Joe manned the grill in the rain while it was all hands on deck in the kitchen. Cheeseburgers and hot dogs and potato salad and pasta salad and guacamole and of course Grammy's birthday cake - more on that and more birthday related posts later this week.
at May 06, 2018