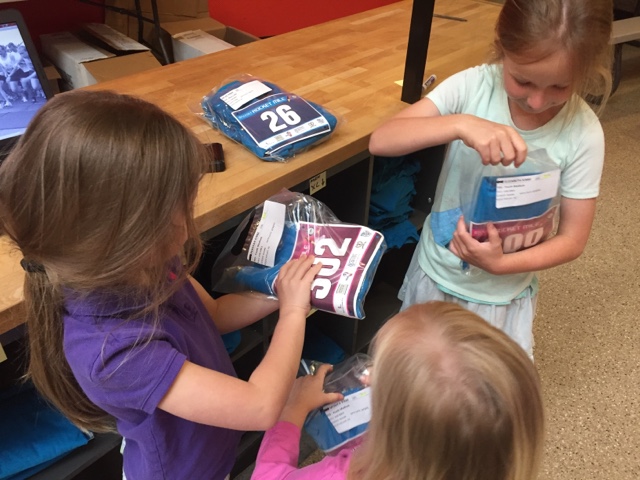 We picked up our packets in the chilly mist on Saturday at lunch time after a morning of going to the dump, signing up for swim team and making a Sam's run. 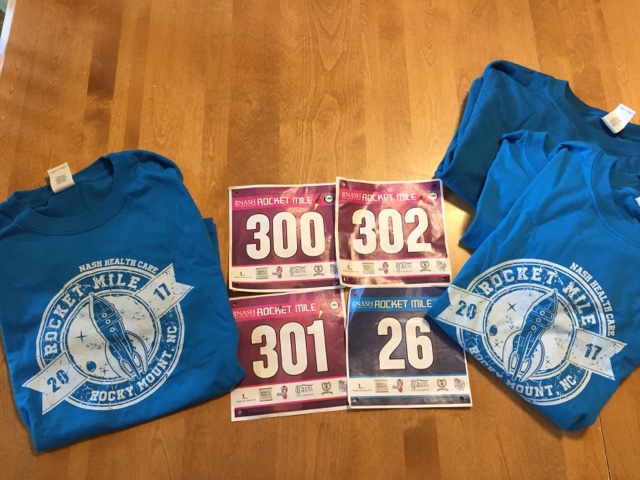 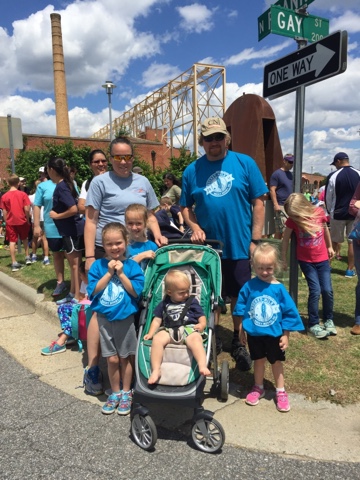 Hopefully I'll be added back to the running ranks next year.

Papa was signed up to run but thanks to some bizarre pre-race foods choices (pineapple and watermelon) and their effects... well let's just say he didn't race. Probably also didn't help he had worked a 15.25 hr day on Friday and a 11.5 hr day on Saturday.

Anyhow, the girls eventually stopped bugging him about it and I think I'm going to implement a race training program next year... for EVERYONE : ) 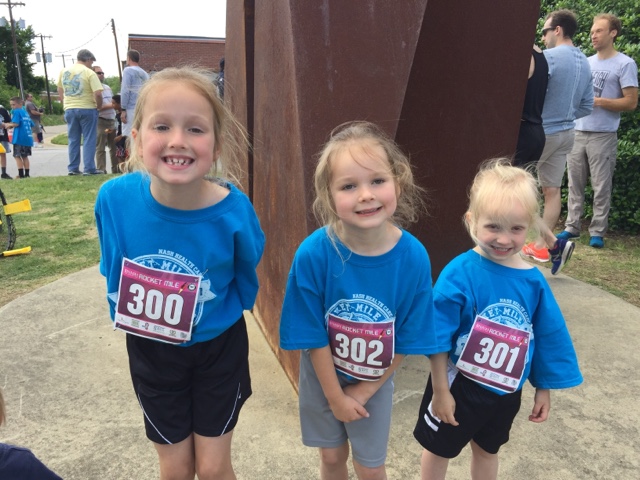 Too bad we didn't name our kids in alphabetical order.... 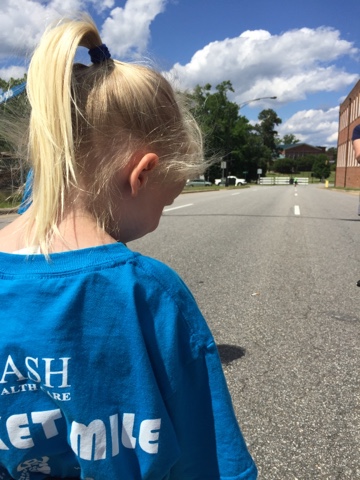 This was M's first Rocket Mile. She hears us talk about Rocket Mile Road many mornings because its the last road we are on before E's school. She seemed excited but really had no idea what she was in for. When we lined up with all the other girls (race are broken out into men, women, boys, girls), I could tell she was a bit nervous. 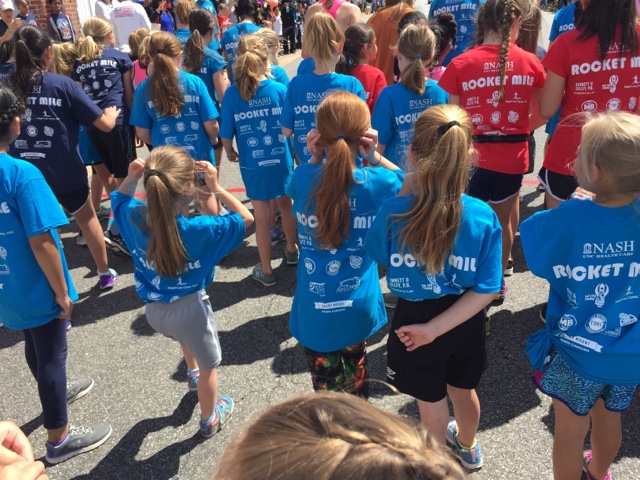 E and R were seasoned pros and wanted to be at the front of the line but ended up with a group of friends from school (love our school!). I knew E would be fine. R was and is my joker. I'm never quite sure what she'll do so I told her she could run as much as she wanted and if she needed anything she could talk to a volunteer in a bright green shirt OR she could always wait for me and M. 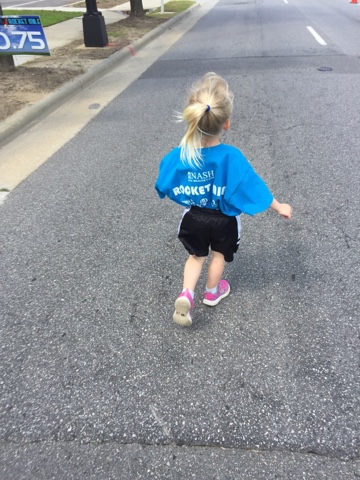 The race started and M and I started at the caboose and never gave up that title. She held my pinky and we ran for a bit and walked for a lot. I thought I saw E (because the race is a big rectangle down city streets you can see runners when you cross a cross-street). I had my eye on R who was not terribly far ahead of me and M for most of the race. The group she was with took off at the end though.

M and I chatted. She desperately wanted to splash in the puddles on the sidewalk but I told her that probably wasn't a good idea. We talked about the stop light colors and I tried to convince her to run if it was green light - that was not successful. We got to the very last turn and everyone realized that the caboose had arrived and M SOAKED IT UP. I mean if you had several hundred people cheering for you - that's how you finish a race. YAY!

She did it and I knew she could and all she wanted was her own bottle of water. I was just glad I hadn't signed up for the women's race and planned to walk with M because I ain't trying to have bebe K#5 early! 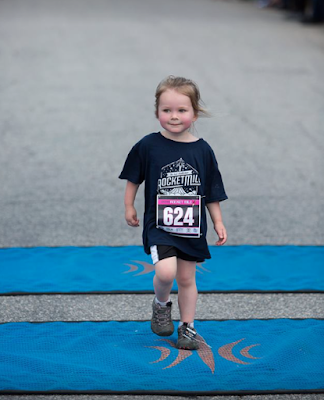 That's the short version of the post so the rest is going to get complicated and reflective so watch out. 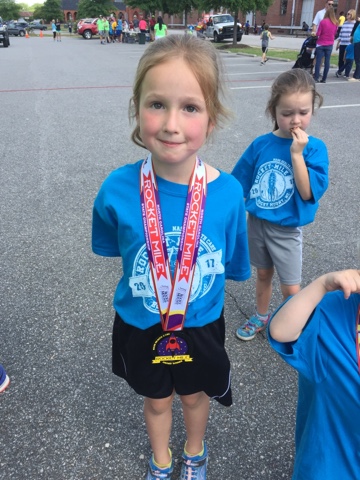 Now, E being nearly 7 (but not yet) was at the top of her age group. She finished 4th last year and knew there would be a good chance that's she'd place in the top three and get a medal. Which is exactly what happened. She took off about 40 seconds from her time from last year and won the 6 and under age group. She had practiced at school (thank you PE) and she had practiced at home. YAY!

R finished all by herself and added a few minutes to her time from last year (probably because I wasn't there to give her company and encourage her to run). Totally fine. Proud of her for doing it on her own. YAY!

I figured M would likely finish within the allotted 20 minute time frame. Seeing her have her moment when everyone was cheering for her was awesome. Not as awesome as it was with R the first year we did it because I wasn't sure R was going to finish. It was a different kind of feeling this time. M totally soaked up the moment and fed off the people cheering for her. (Whereas R had the same cheers but never picked up her pace or seemed fazed but the crowd - that's just how she is)

Anyhow, here is where my parenting heart was pulled into 3 pieces... 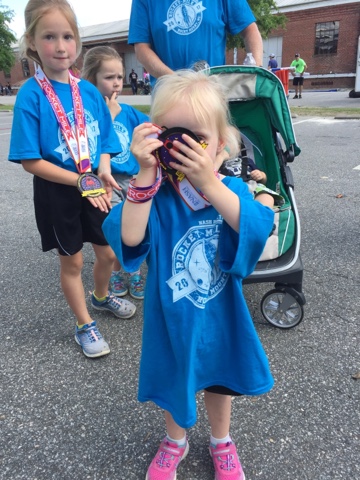 Before the girls awards were given out, the man said he had a special award for the only 3 yr old who finished... Guess who that was. Miss Running Queen herself.

My heart sunk and was happy at the same time.
I knew E would be getting a medal and here M was with one too which means... you guessed it R was left out.

The year R was 3 and raced we left before the awards (and who knows if she would have even gotten a medal in the first place because it was kind of an on the spot thing).

I think it was a quintessential middle child moment - R being the middle girl.

It's such a bizarre dynamic of wanting to be super excited for E for finishing first and M for finishing but not making too big of a deal about it out of fear of hurting R's feelings. It's like I had to have different conversations with each kid. I don't know it was so weird and I'm still reflecting on it two days later and probably will for some time. It's one of those moments that makes you think and think and think because it's such a quandary. And I'm sure one day I'll look back and be grateful for this because surely it will make me a better parent and understanding person.

When we got home we walked in the door and R announced - 'that it was good you got medals'.

That night in the shower I cried for R. Not because she didn't get a medal but because she's a great kid that's got a huge shadow of a big sister to live under. But really she doesn't live under that shadow at all - unless we put her under it and we really try are best not to. Rs a totally different kid and we love her for that. She marches to the beat of HER own drum. She cuts her bread in half a different way than the rest of us - AND THAT'S OKAY. She want to play tee ball instead of soccer. Great. She's got a huge heart and sometimes I just don't see it because she is not as expressive as the other girls but this year, on this day, on this occasion - her big heart shined through.

Email ThisBlogThis!Share to TwitterShare to FacebookShare to Pinterest
Labels: family time, Hurricane Kibbe, outside with the kiddos, the sisters, things i think, traditions