July 29, 2018
The summer swim season has come to a close so I'll ceremoniously give my thought on why the heck we spent the last 8 or 9 or 10? weeks pool side for countless practices and a handful of meets and coolers full of snacks and the occasional popsicle afterward. 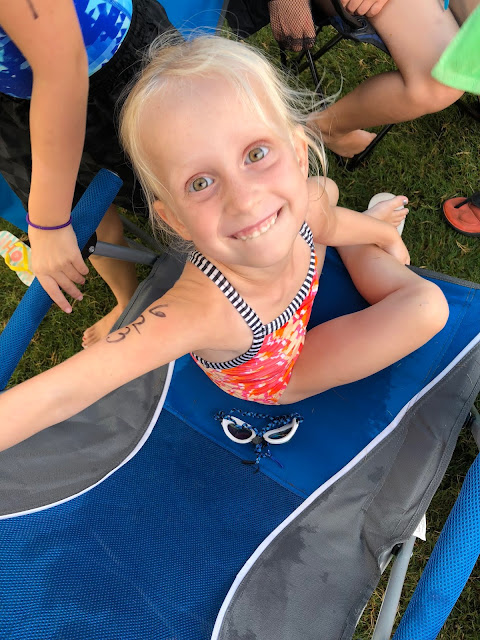 I was pretty on the fence about bringing M to the conference meet because this year it was a bit further than the regular 15 min drive to the Y. She can swim the length of the pool by herself and was supposed to do it at the conference meet even though she was still swimming pup squad. It was an early start at 6:15 but she came bounding out of her room and I couldn't say no. 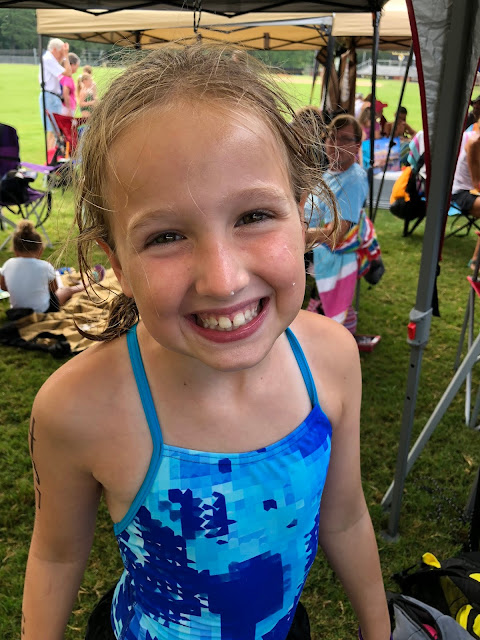 E had her heart set and her mind made up about getting high point winner for the meet. When she found out the girl she thought stood in her way wasn't at the meet, she was pumped. I kept reminding her it was not a done deal and she had to get through each stroke. 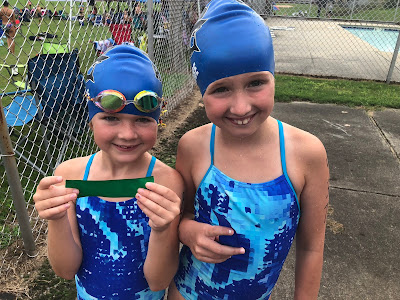 They were really cute cheering each other and their friends on. 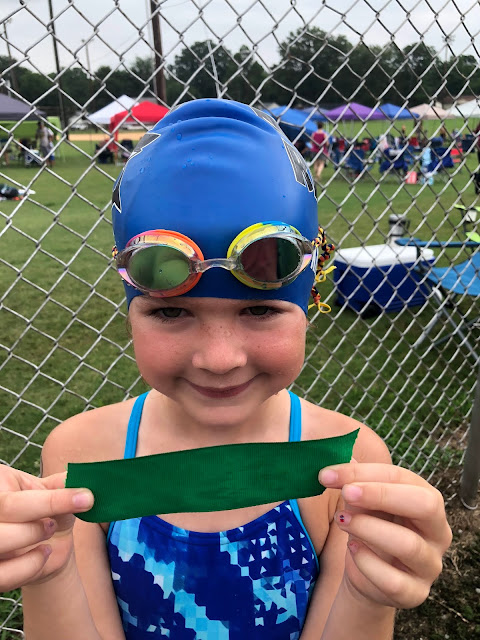 R had a great meet. I'm so proud of her for doing three strokes this season. She has got some fierce competition in her age group and considering she really has only been swimming for 10 weeks it is quite remarkable how well she has done. At this meet she got a red ribbon in freestyle, she got her stroke/breathe count synced for breaststroke and stayed on her back the whole time of backstroke - but honestly R is not overly concerned about the colors of ribbons. She did ask a few times if she could get the high points medal for 6 and under and I quickly reminded her that she swims against girls who swim year round and maybe that would be in the cards next year. 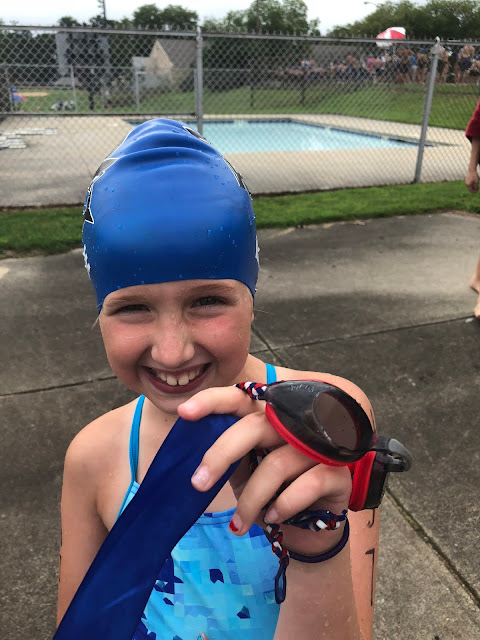 E swam a great IM (minus the crazy, crazy, crazy breathes she takes during freestyle) and backstroke at the meet so she was psyched with two first places. We talked about doing a shallower dive and quicker strokes for breaststroke (which was questionably legal last summer). Breaststroke was the weakest link and it was the stroke that the other girl who was vying for the high points medal was swimming.

Before the race, she knew she had it. I told her if she got first she'd get the medal. If she didn't, then she'd have to wait and see how this girl did in free. I don't think she was listening.

E swam one of the quickest breaststrokes I think I've since her swim but she came up a few seconds short and very much in second place.

She kept her goggles on and let the tears flow and the frustration out at the tent away from her team. She was crushed. As in, I never want to swim again - upset.

She perked up enough to cheer on R in her last race - free and I told her she'd better be cheering hard for her teammate (who was swimming against the girl who beat her in breaststroke). The race was insanely close. I couldn't see who won 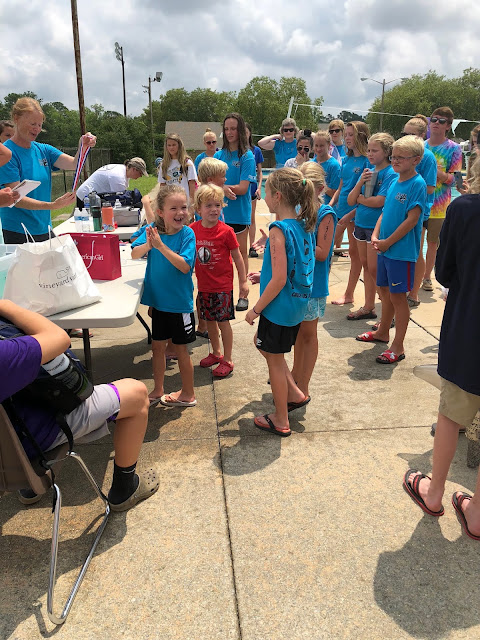 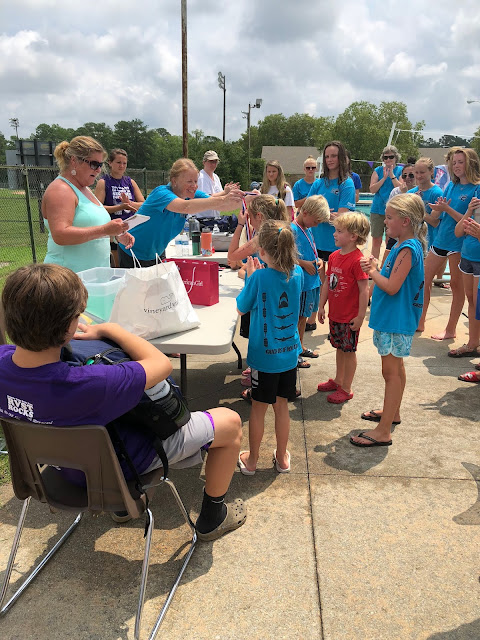 The girl who beat her in breaststroke ended up 3rd in free (she was .2 seconds away from 1st) 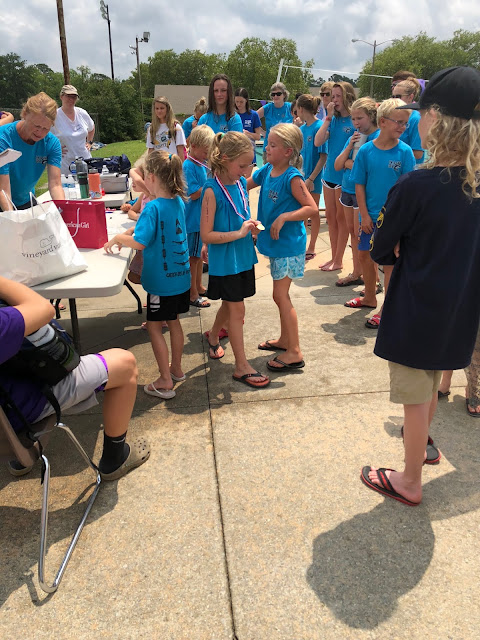 so E brought home the high points medal after all, not without a little drama and some major help from a teammate (the one who is patting her back is the one who won freestyle) and another swimmer 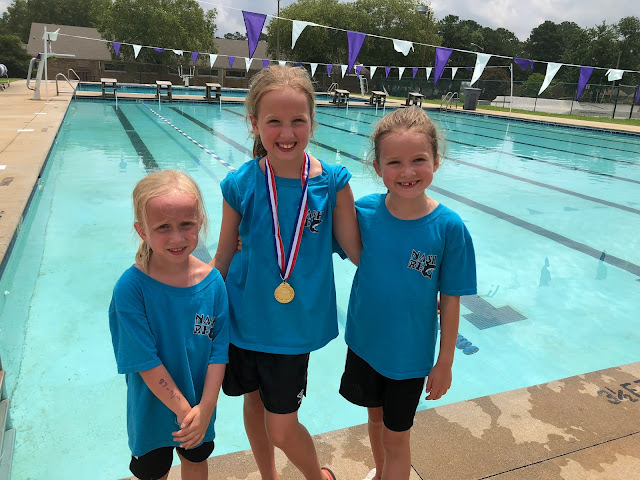 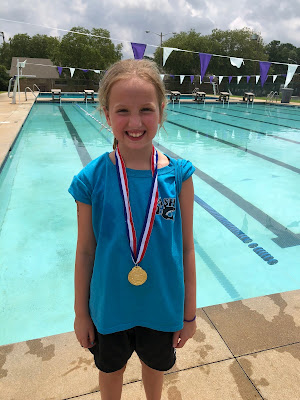 I'm proud of E for earning the medal but I'm also glad it it didn't come easy. 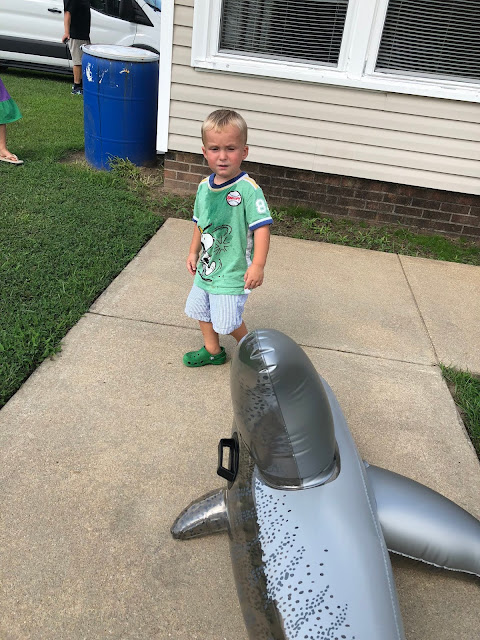 A was carrying around the shark mascot after the swim team end of year gathering. #futureshark 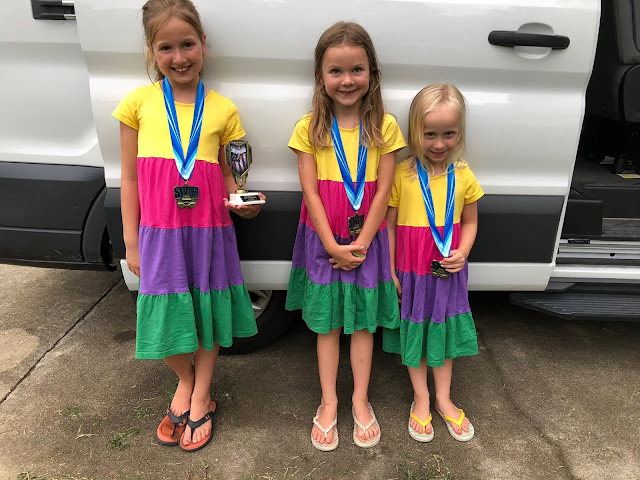 Swim season coming to a close is hard because in some ways it seems like we just started. It also makes summer feel like it is over (even though it's not). I can't say I'll miss shlepping all the kids to practice in the evening (because Lee's rarely home in time for me to leave the non swimmers) and our summer sitter is probably glad to not be tied to the practice schedule. Maybe we'll still make it to the pool over the next month or so.

The season has been filled with so much progress and many successes.

And it was worth it. It would not have been possible without the dedication of the coaches and parent volunteers who make the swim team go around. We are so grateful to be part of our pool. It is a gift. 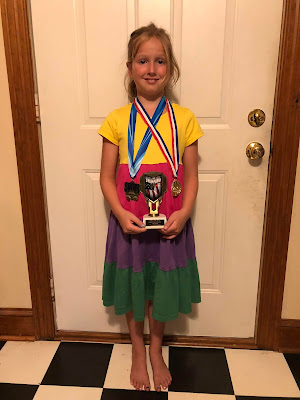 She wanted a pic with awards - she won high points award for the team for the season. 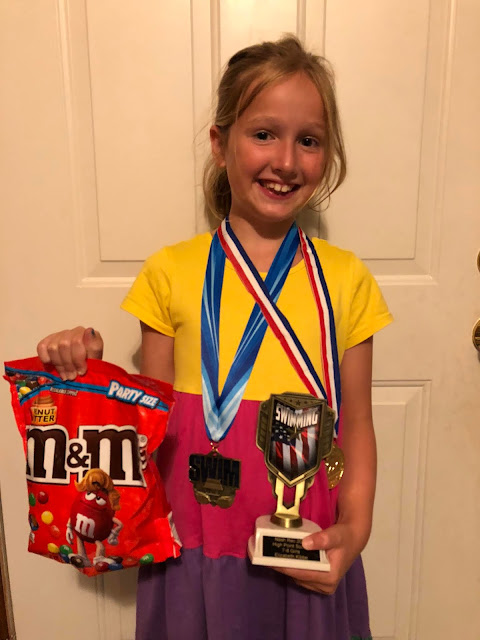 I handed her the bag of PB M&Ms I promised her if she won high points at the conference meet - she was expecting them but surprised. I told her she owes her friend a few of them for helping her out in freestyle. I think she's definitely ready to share :  ) 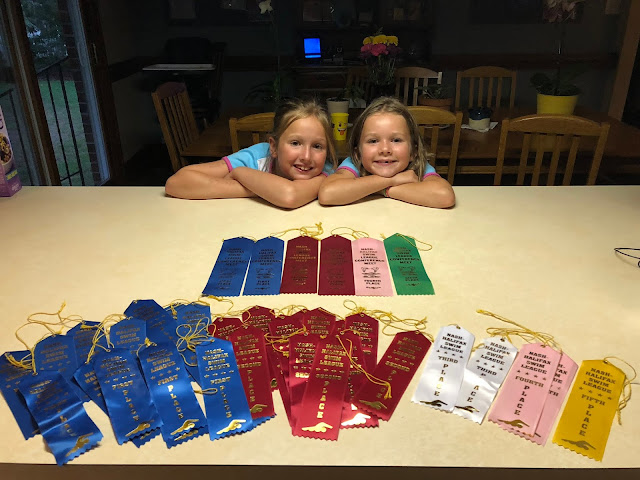