Linking up with Kelly ... surviving of school

We are definitely in between season and our laundry proves it 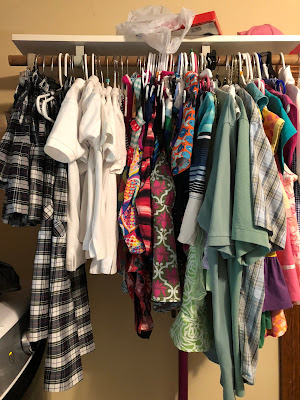 School uniforms and bathing suits. After this weekend a lot of the bathing suits will be packed away until next year. E will still be swimming in the fall and winter and R will likely start in the winter. M is in that strange stage of being capable of swimming by herself but getting vertical to take a breathe so she'll likely get more swim lessons with A once soccer is over. 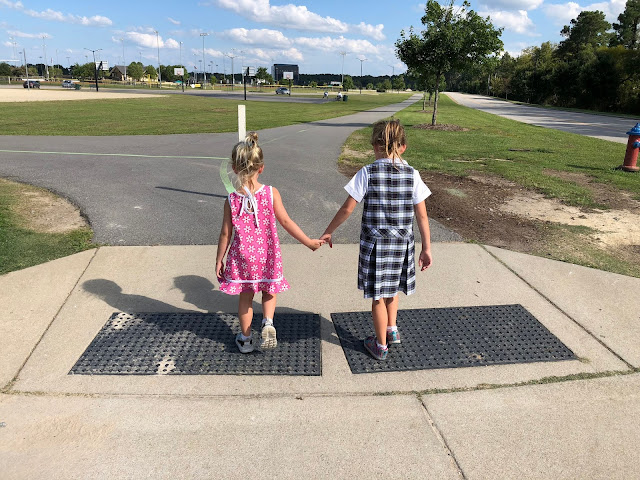 Walking over to the park during E's swim practice, they were just chatting it up. I think M really misses R during the day now that school is back in session 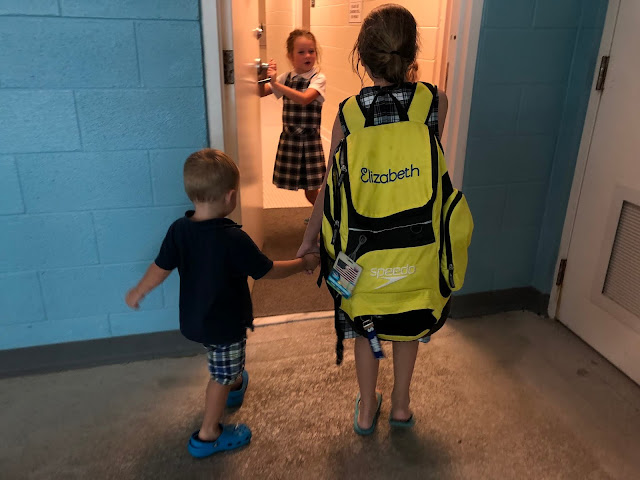 He may get on her nerves like crazy but she's a great big sis.

Friday night Lee took me out to dinner for my birthday. It was really nice. We went to a local brewery before and played corn hole - which we never do. Then we went to a restaurant we hadn't been to in well over a year (because the service wasn't great). I'm glad we went back.

Saturday evening we went to liturgy- we've been trying to get on a good church routine but it hasn't happened. Here are our options

Ukrainian liturgy - Saturday nights
Ruthenian liturgy - Sunday mornings
Roman/Latin rite Mass - block off the whole weekend because Lee serves at all the masses (and he's going to fuss at me about my rite notation but whatever : )

Anyways we were planning on making it a 3 week cycle at the beginning of the summer but that hasn't happened. It was time to hit the Saturday night DL. After church we went to Jason's Deli for dinner. If you have never been, it is great. Great salad bar and the best part... free soft serve ice cream. When we rolled in, it was a bit busier than usual so I wheeled A and C in their highchairs to the back room area where there was another family or two. I hit the salad bar and when I came back this mom was distributing napkins and packs of graham crackers (those are free too) around our table. I thanked her and looked over my shoulder and lo and behold another mom of five - hers were a bit older than ours. As they were leaving she said "You are doing a great job" to which I replied, "Thanks so are you!". Then she said, "Moms of five unite". Funny things happen when we go out to eat.

So this meant that Sunday morning we were home - which was strange, but nice, but strange. I went on a run while Lee cooked. Cooking is definitely his love language - or at least one of them. 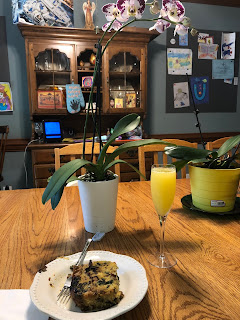 He asked me what I wanted him to cook for my (family) birthday dinner and I was on the fence. When I finally made up my mind and knew we'd be home for breakfast Sunday I raised the bar even higher by asking for my FAVORITE egg bake.

It is amazing and it is paleo - not like I care - but its got a ton of veggies in it and zero cheese. So after my run, we had a peaceful kid free breakfast because they turn their noses up at it which works out really well for moi. 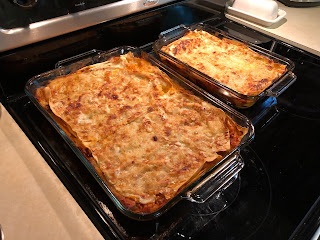 And if that wasn't enough he moved onto making homemade lasagna with two sauces and homemade noodles.

Then we had carrot cake a la Grammy for dessert - which was AMAZING.

Basically I gained a million pounds over my birthday weekend but it was worth it.

C rested while we ate breakfast because she is a wreck sometimes which meant that she was up while A was resting... 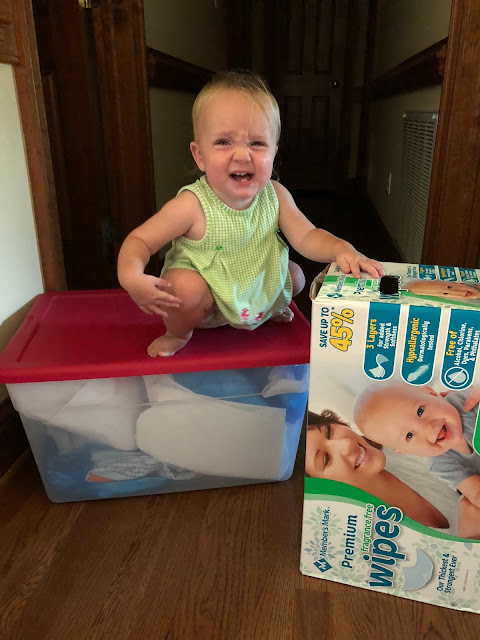 Except A's door does not close all the way so we had to block the hallway off so C wouldn't interrupt. She crawled up on the blockers like a champ but was so frustrated she could not get down!

This should be R's last year of tee ball... 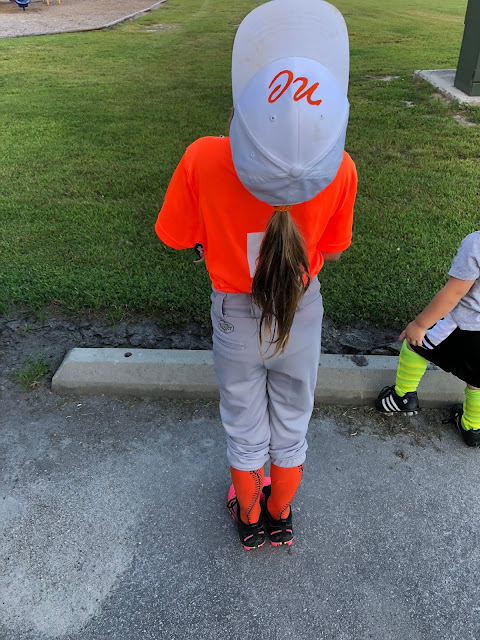 Her coach (who is a good friend) wants the team to embrace orange. So instead of fighting it any longer, I decided to roll with it and got R some orange socks and she wanted to wear an orange hair tie. We are all waiting with baited breathe to see what color scheme we've got going on for this season (R's wearing last year's jersey to practice) 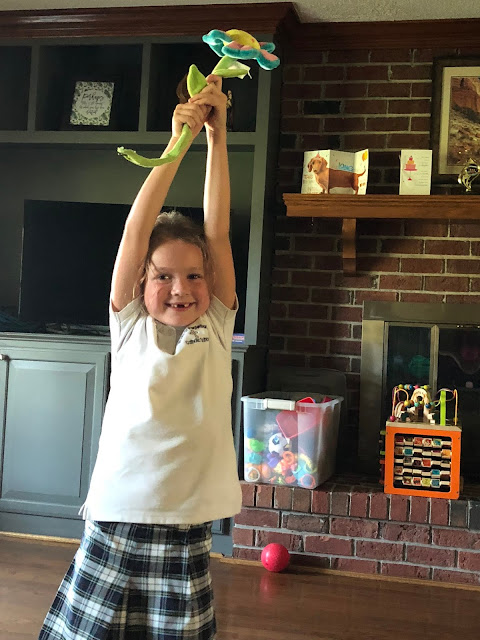 In other R news, she got her first blooming flower at school. Which is funny because the night before she specifically said - NO ONE IS EVER GOING TO GET A FLOWER - she was in a bit of a tired after school funk. Her teacher awards blooming flowers to the kids if they learn something new or do something great.

Our schedule on Tuesdays is interesting and was supposed to work really well. 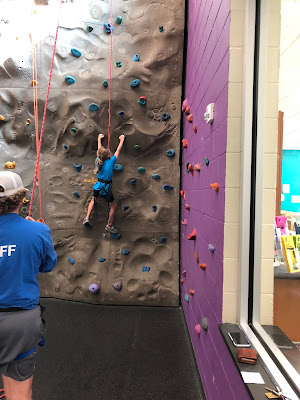 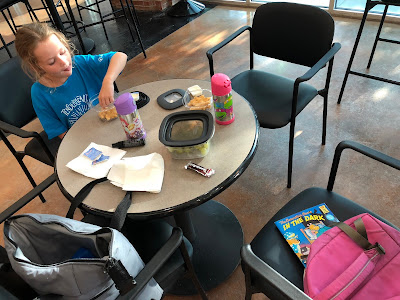 Then after swim practice we eat dinner together and work on homework before AHG. It is perfect. Lee or I stays home with the others and all is well.

And that was the plan until this week...

Crazy tee ball games are going to be on Tuesdays - and they were supposed to be on Tuesday or Thursdays - so I knew there would be SOME AHG overlap but I didn't think it would be EVERY WEEK. So now I need to rework my game plan and pray for rainy Tuesdays

With bigger-ish kids in the house it is easy to forget what littler kids should be/ like to do. 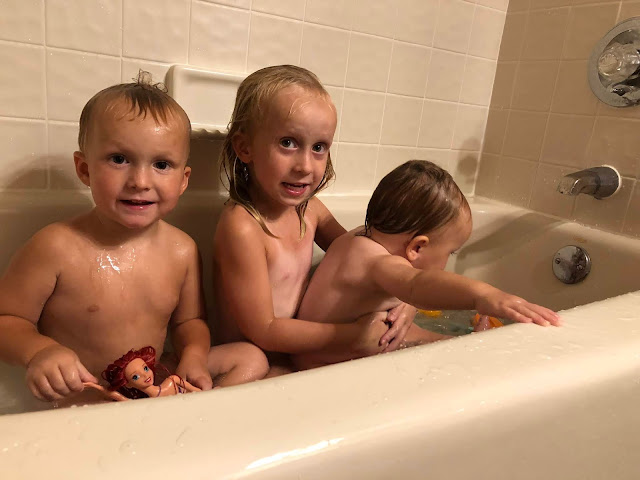 Like take baths and sit and read bedtime stories for ever and ever. Sometimes I catch myself thinking would would NEVER have given E or R a shower or we would have read them ten stories and not just one or two. It take a bit of extra work letting the littles be little but when we can, it is definitely worth it.