72 hours in Espana - with the little accent on the n

Yeah so Lee and I went to Spain over the weekend for a friend of mine's (from middle school - crazy I know!) wedding. I think we were there for maybe 74 hours but 72 sounds better. I have a knack for short trips.

A short while back when going was just a - hey, that'd be cool - thought; we really got to thinking. Hey maybe we should go? How many times are we going to be invited to a wedding in Spain? It's a few weeks from our 10 year anniversary so we should do it right? Shouldn't be a super heavy work schedule because summer is nearly over? But then there was, well what about the kids? What are we going to do with the kids? We have 5 kids, what should we do?

Our trip would not have been possible had Jibbe and my parents stepping up to the plate and taking care of the kids. Monumentally huge because there is probably only one other person I'd feel good about leaving them with and that wasn't in the cards. So, many kudos and thanks to them for making it happen. And then there was the village of friends who helped cart people around, took kids on playdates, checked in, made sure everyone was doing okay and made the main keepers of our kids lives just a little bit easier. To the village - Gracias.

A side note, but an important one, aside from the multipage chronological list of EVERYTHING and every single phone number in my phone - one of the last things Lee and I did together before leaving town (aside from praying we'd be back safe) was to sign our wills. It was weird.  I felt like I was fossilizing as the ink hit the page but it was important and necessary. If you have kids, you best have a will.

ANYWAYS, on to the fun stuff...

After the nearly 8 hour flight (that I slept through) we ended up in Madrid early Friday morning. We dumped our bags at our hotel for Sunday and got out and did some walking... 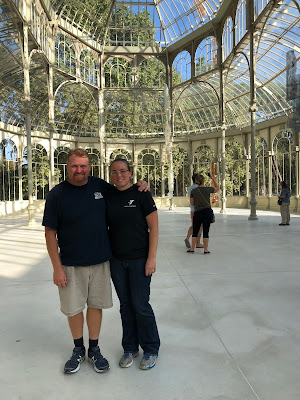 Not too bad for 12+ hours of travel 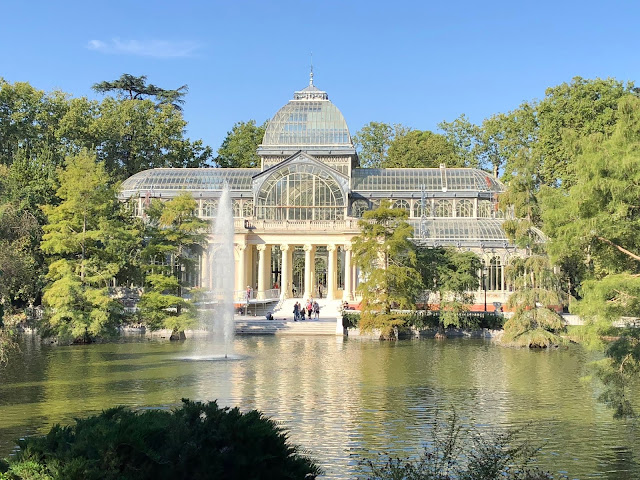 The Crystal Palace in the Retiro Park 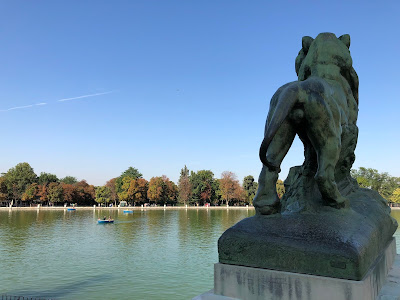 The sculptures in the park are amazing 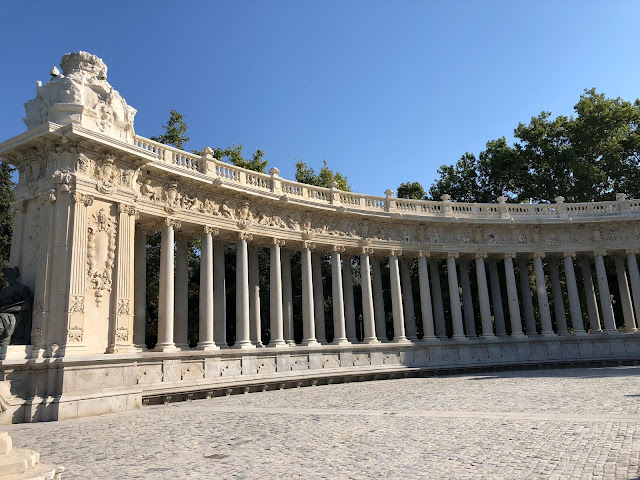 And the architecture too 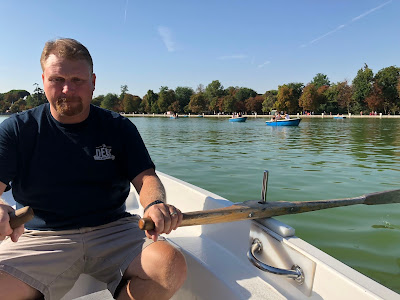 I knew as soon as I saw the boats I wanted to go on one, Lee of course said yes 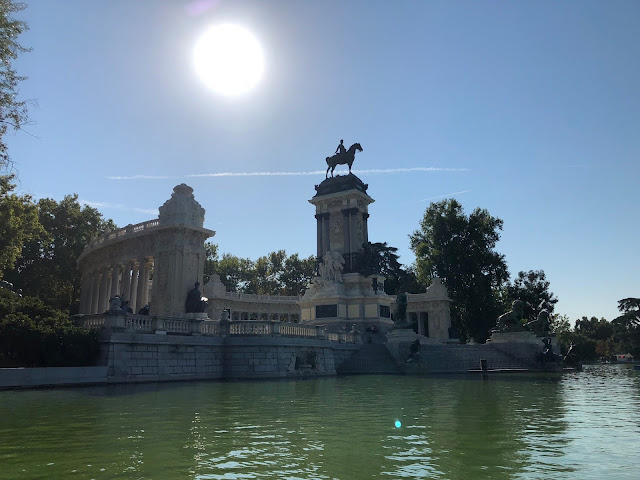 It was a bit hot but not humid. The water was definitely greenish 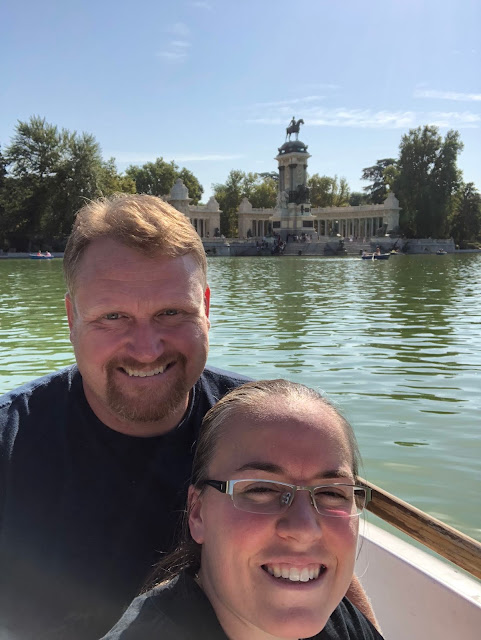 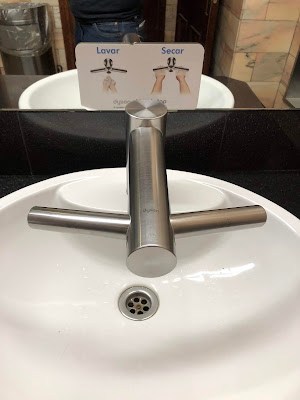 Then we walked to the Hard Rock Cafe - yeah, yeah, yeah - we collect a pin from the HRCs that we visit TOGETHER. It is funny because we were remembering the few that we had been to and then we  got home and I put the Madrid pin with the others - we had realized we forgotten the one we got in New Orleans 8 years ago. Anyways, I thought this was a really neat sink/dryer. Under your hands get watered, on top they get dried. 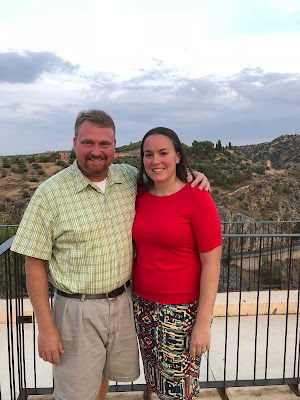 Then we headed to the hotel to grab our stuff and walk to the train station. The hotel was in a super perfect location to Independence plaza and everything we did in Madrid was walkable. So we got our tickets in Toledo and lined up with a mountain of other people to take the quick 30 minute ride to the fort city. 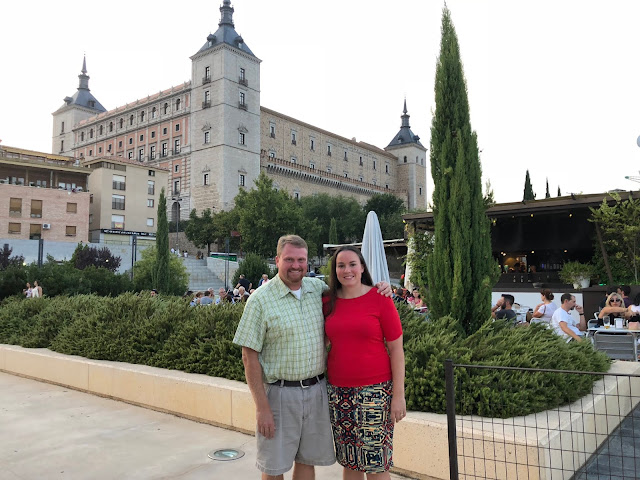 We did NOT walk to our hotel when we got there : ) we checked in, cleaned up and headed to the welcome party. Which was great seeing a few friends from middle/high school. Amazing views, amazing food, amazing times. 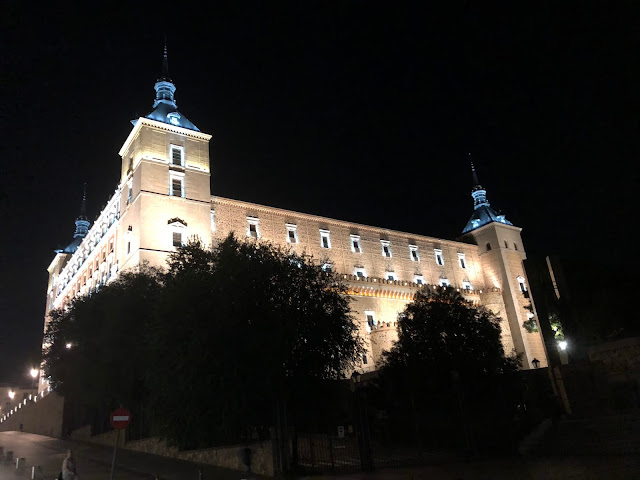 Now it was late - or at least for us - so we cut out pretty early by Spain standards. People, we slept for over 11 hours that night. I don't know if it was the jet lag or the lack of kids or a combo of both but it was glorious. Uninterrupted sleep. 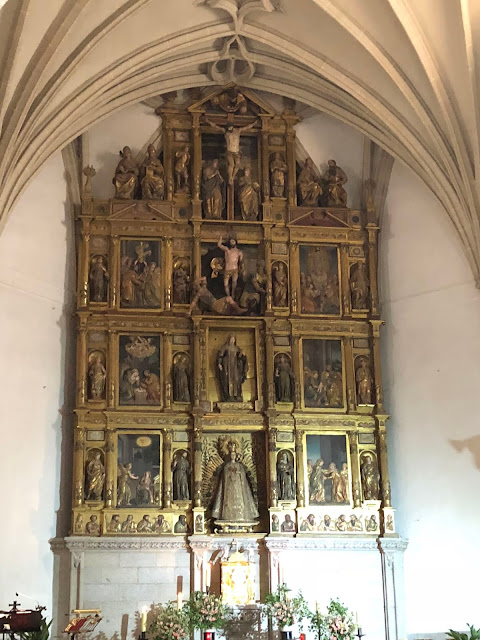 We went into Toledo mid morning and wandered the cobblestone roads and tried to stay away from the tourist groups - there were a million. We went to a few churches and you have to pay to get in? Which is odd but I understand why payment is required (to help keep up the churches and to maintain some order in the sacred space) but it is weird to me as a practicing Catholic. Like why are people wanting to tour a church like a museum. Yeah they are beautiful and there's a reason for that beauty - so stop paying to tour a church and spent an hour sitting in a pew a Mass and take it all in. Which is what I would have liked to have done but even at Sunday Mass, when the sign said for Mass-goers on the side entrance because the main entrance was locked, people still milled around and came and went during Mass which so odd to me. Like you are kind of being disruptive so sit down and stay awhile. Anyways, I digress. 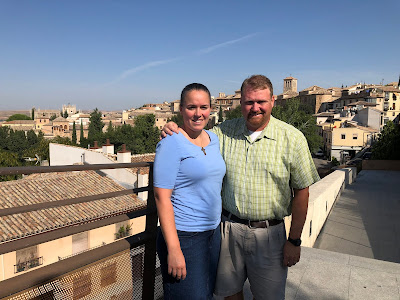 We talked and walked and talked some more. So good for our marriage to have some time and space without kids interrupting thoughts and conversations. In the beginning it was just us and then they came along... 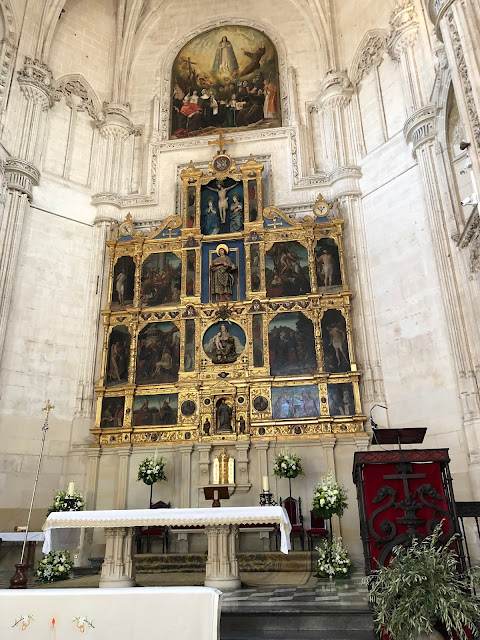 This was from a church/monastery we did pay a few euros to go to (the above one is from a church we found the side door unlocked and we were the only people inside except for a nun in the cloister). It is truly amazing these churches and the time and effort and beauty went into creating them. 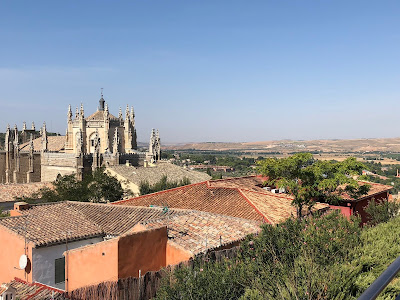 A view from one of the sides of the city. 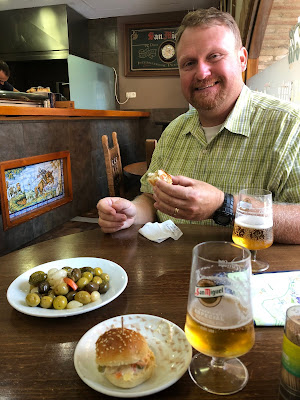 Okay people. Let's talk food. A. those are Lee's olives B. the Spanish ham - they cut it right in front of you - is amazing. That and some fresh bread. Done. I think I tried to eat that as often as possible. 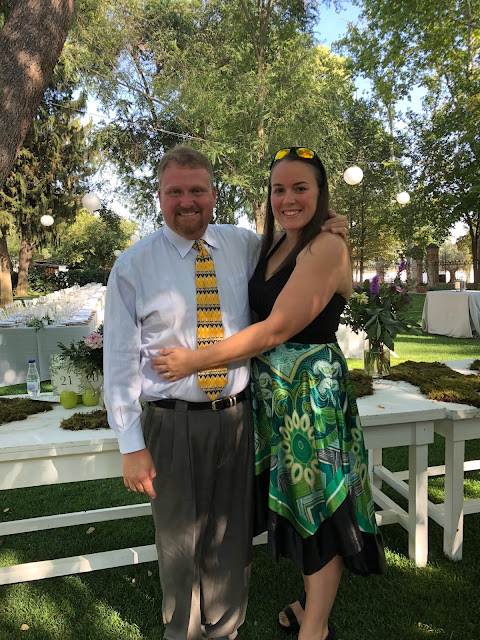 I meant to have us talk another pic without my sunglasses on BUT it didn't happen. Now the wedding was in an olive grove and couple is amazing - they seriously know how to entertain all the while looking fabulous and not to mention, you know, like getting married. It was a wedding for the record books for sure. 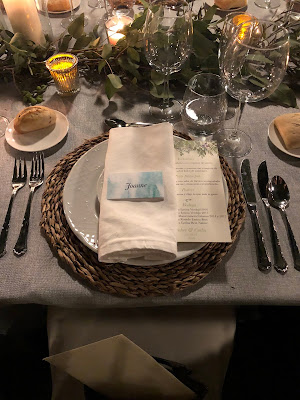 I will say probably my single favorite food for the night was dumplings during the pre-feast appetizers - but there wasn't anything that wasn't super yummy. We made it back to our hotel Sunday morning at a time that we will sometimes set our weekday alarm clocks for - that made me yawn just thinking about it. We got up mid morning hit Mass and then headed back to Madrid 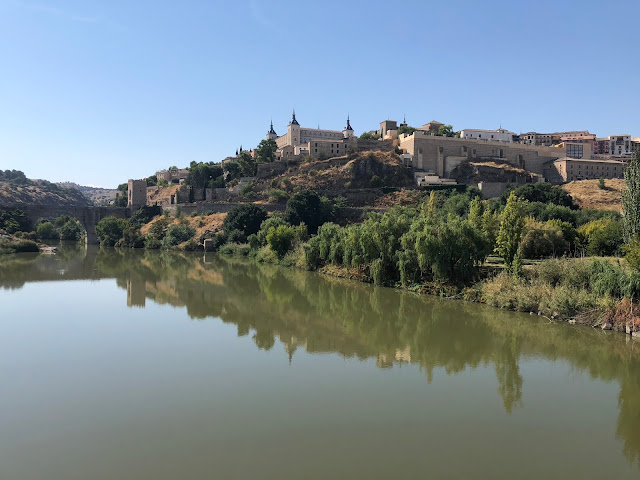 We lugged (okay we rolled it) our luggage back to the hotel and thank goodness our room was available early and was upgraded ?!?!? so we could squeeze in a siesta in our 2 bedroom, 2 bathroom, kitchenette and massive living area suite - before heading to the Prado. We had an express time at the Prado and saw some really fantastic art. Then it was off to find some tapas for dinner and retiring early to bed.

Monday brought an uneventful trip to the airport - Lee said our taxi we took when we arrived nearly hit a moped. I did some work on M's stocking and didn't have the thread or beads to do the true final touches on it so I knew I packed A's for a reason. But somehow I didn't grab the pattern so I was super annoyed because what was I to do with 9 hours on a plane and no cross stitching to do plus I really didn't need/want to fall asleep on this one. So Jibbe came to the rescue and found my pattern and I paid way too much for internet just so I could go on and download my pattern and work on A's stocking. The day was saved!

While on the trip I read a good chunk of Love Does - which is insane and an entertaining, worthwhile read. Lee watched Three Identical Strangers so I listened to that while I worked on my cross stitch - that's definitely worth a watch. Lee left my copy of The Grace of Enough - which I don't even think I've mentioned - on the FIRST plane from RDU to JFK so I was bummed (as was he) because that book is super thoughtful and thought provoking.

So anyhow, we made it back - Praise the Lord! Our trip was short but so fun and so great. We could not have done it without grandparents and the rest of the village - again we are truly grateful.

Email ThisBlogThis!Share to TwitterShare to FacebookShare to Pinterest
Labels: vacation