Linking up with Kelly ... the first week back

Everyone seems to have survived the first week back at school without much ado. I really did like the schedule we had going over break... me go into work early, come home for lunch, Lee go out and do stuff, quiet-ish nights at home. That's all gone to pot with school starting back but ce la vi.

The Wizard of Oz showed up in pajama form... 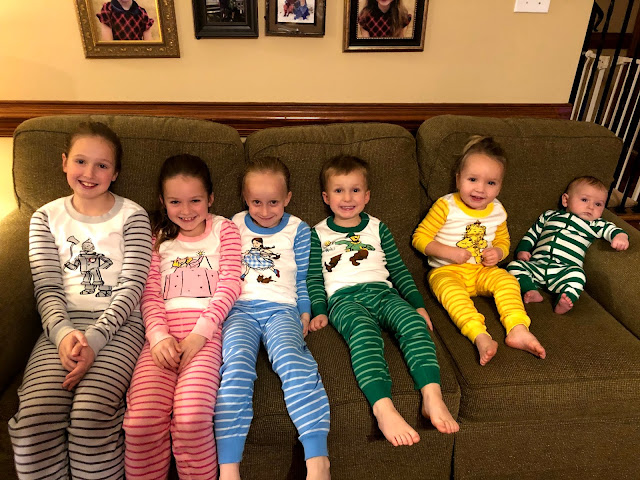 Not be confused with this same crowd 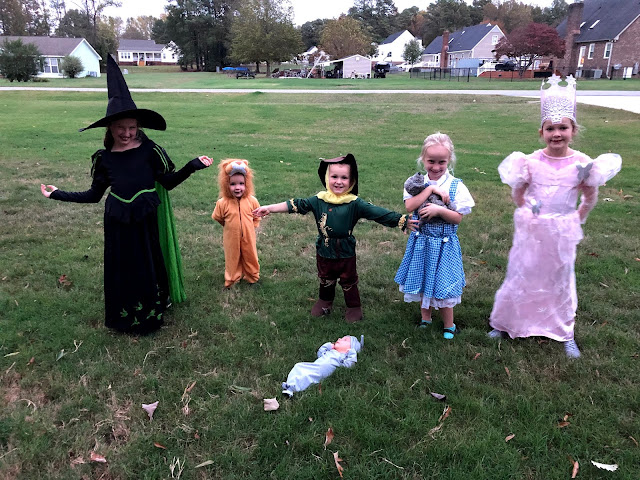 Swapping the Wicked Witch for the Great and Powerful Oz and you basically have the same crew.

There was numerous questions as to what and why J was... the tin man for Halloween. I mean clearly Dorothy and her crew would be absolutely incomplete without the tin man and he even has a tin man-ish hat on.

Work has been super busy and after 10.5 years I'm finally moving on up to my own office - which is weird on a ton of levels but probably first and foremost that I have been working for a company for that long. Decorating updates to follow... maybe, maybe - I've got a bunch of soccer plaques that are in my current space plus my diploma is collecting dust at the house so thinking about getting that up in the office?

Speaking of decor, Lee graciously hung/rehung pics in the family room (maybe because he got tired of me asking or maybe he wanted to get the new frame off the kitchen counter- either way it got done). I wish I had a before and after of tonight but here is the original before and after.... 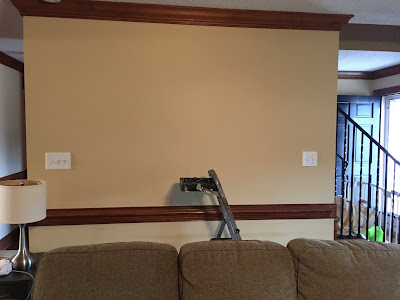 We had been in our house for five years before any pics were hung on this wall and the MAIN reason behind hanging photos was we hosted a Christmas party (for a small handful of adults) #adulting ... nothing like a deadline to make you get stuff done 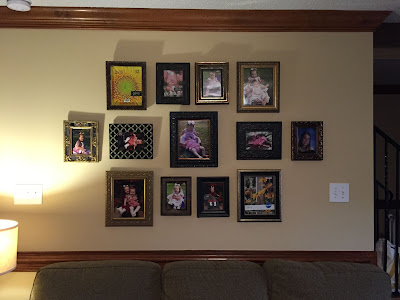 A decorator helped put my vision of the photo wall/collage into action because I cannot think outside the box and while I love a photo wall my OCD couldn't get past the different size frames and stuff. The wall has served us well over the last two years as I try to change out the big frames with a winter/summer individual pic of the kids and the smaller frames get freshened up about once a year. Well along came another Kibbe baby so we HAD to get another big frame up and filled.

I'll see about snapping a pic of the new layout when I can get some natural light.

I've got high hopes for putting up a few pics in the master bedroom using some bigger frames we got as wedding gifts and never survived the move and getting rehung in our house - which was nearly 8 years ago. I need one more non-photo piece to go with them so maybe once Christmas credit card bill shock is over then I'll snag what I'm eyeing. Also, I'm on the look out for lamps for the master bedroom. I got two lamps for the entry way a few years ago at a winter sale locally and I ADORE the lamps. So weird, I never knew I could like lamps that much. #iamold

On tap for the weekend is skipping a swim meet - but don't worry there's one next weekend. J is getting baptized/chrismated/communicated. Yay Chrism! A has been asking when J is going to 'get blessed' so it is finally here. I've got to get a 10 mile run in as on a 12/31/19 whim I decided to run in a 1/2 marathon at the end of February. A whim might be a bit of a lie but a 2020 price increase helped my cause. I'd been looking for a 1/2 marathon to run that was close and convenient time wise and this Raleigh 1/2 marathon literally came into my inbox on 12/31 and I had worked up to 7.5 mile runs in December so I just ran with it... more on that I'm sure.


E insisted that we stay up until midnight on New Years and of course the big girls were all in on it too. 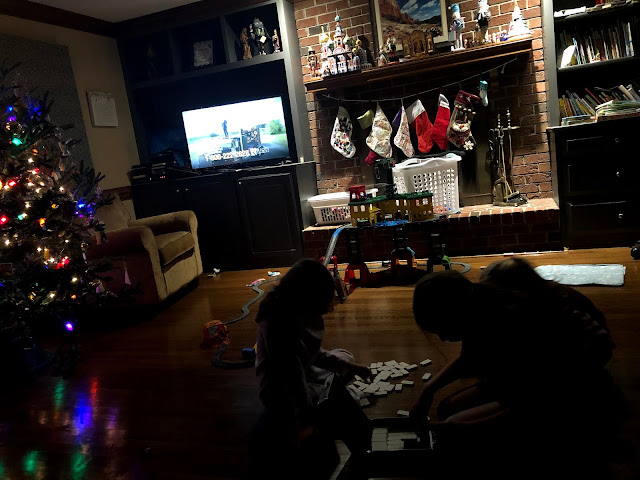 There was some intense train matches that coupled with tired siblings turned into tearful train matches. We made it down to the double fours before we called it quits. E wanted to watch the ball drop in NYC but I think the acorn in Raleigh would have been better - the local coverage of the acorn was better so maybe we'll do split screen next year?
at January 10, 2020