Normal week. No ER visits. I'd say it was a pretty boring kinda week...

If you need further proof that I do NOT do most of the cooking around here...

Backstory:
We were going to a friends house for a playdate last Friday and meatloaf and mashed potatoes and green bean casserole were on the menu. Lee was getting home late late late so I was in charge of the potatoes (I got my favorite meatloaf from the grocery up the road). I was totally on it. I texted Lee a pic of the potatoes and confirmed I needed to use 8 potatoes. Then I called him not long after to get a few more mashed potatoes details

Again, totally on it because last year when I made mashed potatoes for the same meal I totally undercooked the bulk of the potatoes and it was not good. So that was not happening again.

After about 20 minutes (I set a timer) the fork was not going through the potatoes. Well some of the smaller ones but the big ones were not so 3 and 5 and 7 minutes later I was still not having much luck. Well we had to get going for the playdate and I couldn't sit around and watch my potatoes boil so I mashed the ones I could and picked out the resident not-fully-cooked one. 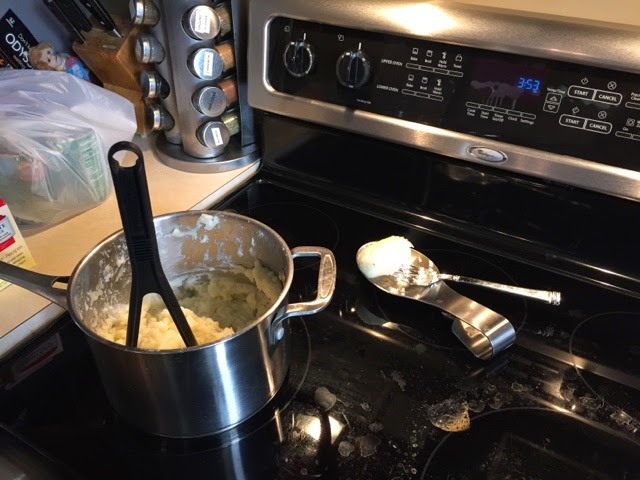 Evidence of my kitchen experience

Then it dawned on me. Maybe I was supposed to CUT the potatoes before boiling them!

Lee - Oh Chicky... Why is there a potato with a fork stuck in it on the stove?
Me - It wasn't cooked so I didn't want to use it
Lee - You didn't cut the potatoes before boiling them?
Me - .....
Lee - CHICKY! Haven't you seen us make potatoes at Thanksgiving?
Me - No I always stay home with the kids!
Lee - But you should have known that!
Me - Okay, if I asked you if the potatoes needed to be peeled before boiling them AND I reminded you of the last time when I undercooked the potatoes for mashed potatoes - you should not ASSUME that I should have known anything!
Lee - ...
Me - I did add butter, salt and heavy cream : )

Needless to say the potatoes had more than a few chunks of undercooked potatoes BUT they weren't nearly as bad as last time AND they were properly seasoned.

I will redeem myself just like I did with the pound cake! 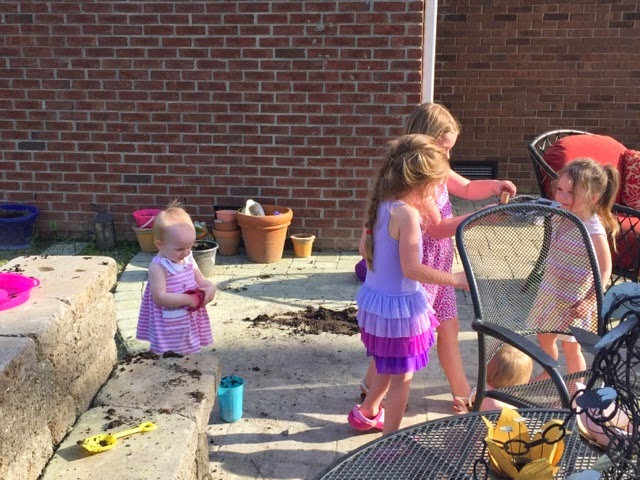 Evidence of our playdate. Seriously the girls have a whole yard and swings and ball and bat set and scooters to play with and what do they choose?

Oh well... playdate (secretly moms time to catch up with friend time) was a success and it was LONG overdue.

Saturday was our last 'normal' Saturday before soccer games. Did I mention the girls are playing soccer? I don't think I have. More on that later.

Anyhow we went to the nursery and got some plants for the mailbox and some herbs because Papa loves to use them when cooking and clearly he's way better at it than me and I'll admit that to anyone every day of the week! 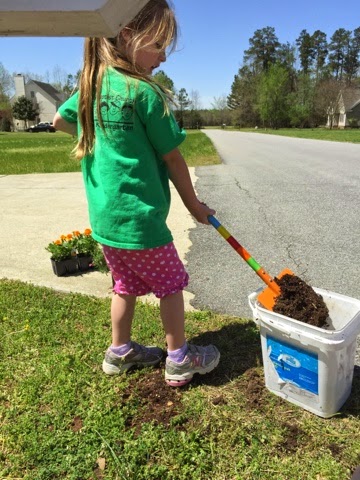 First we dug up the old flowers as well as most of the box to try and clear it of the weeds. 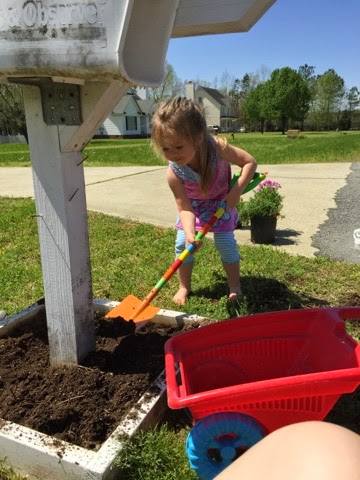 We found a bunch of rocks and only one worm... 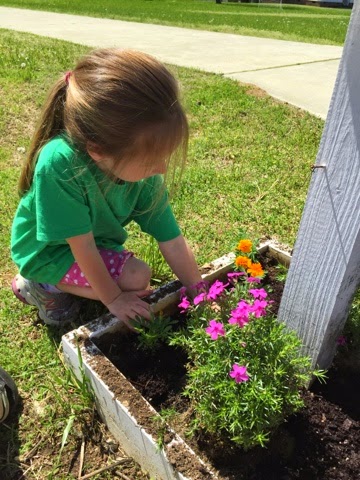 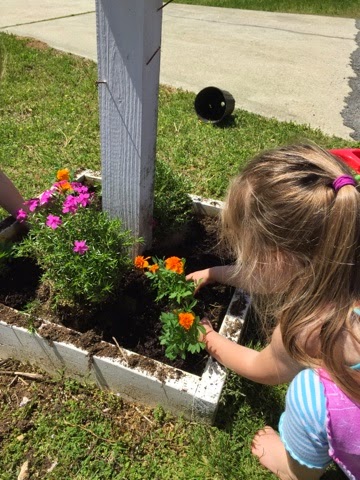 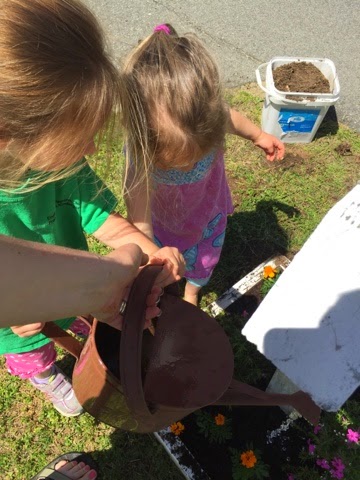 And now all we need is a cute, but pointed sign that asks the teenager who walks the dog down our street every night to not let the dog patronize our flowers. Seriously, the dog is not small and E watched him like a hawk last night and I think if she had seen the dog pee on the flowers she would have melted down and I would have opened the front door for the full effect. She is very protective of those flowers : )

Sunday we were supposed to go out for a nice breakfast after liturgy. We talked it up with the girls and there would be waffles and they'd have to be on extra good behavior etc etc... but the place was packed at 10:30 so we went to Chilis instead. I was SUPER bummed because I do like going out to nicer-ish places with the kids because I think it is good practice for them plus they usually behave better and the food is generally better but ALAS... 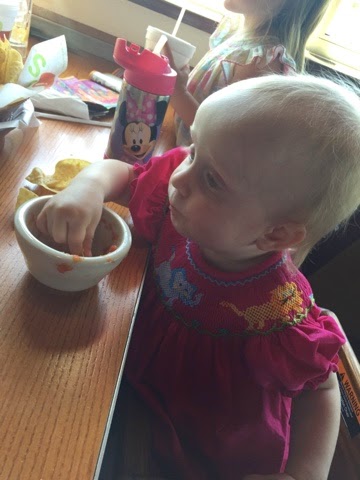 M demanded her own bowl of salsa to dip her chips... 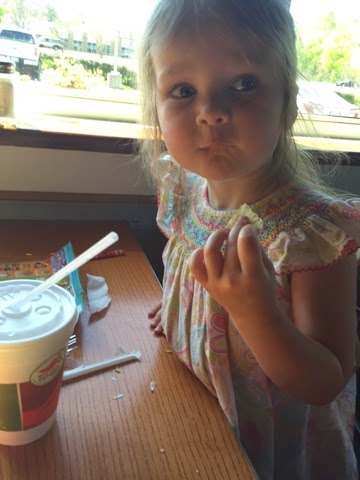 R was content with chips, mac and cheese and corn and did not make a huge mess surprisingly enough 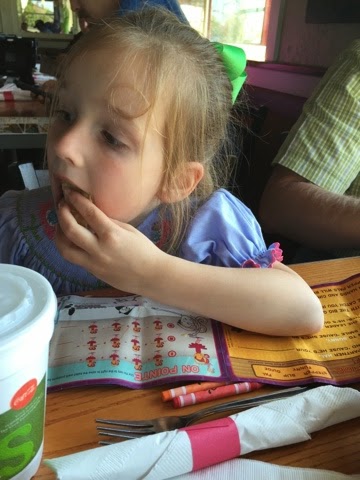 E ordered chicken nuggets and then changed to pepperoni pizza at the last minute and proceeded to eat a single mouse bite out of it. (I had it for lunch on Tuesday)

Overall, it was not what we really wanted to do but it was a nice treat! 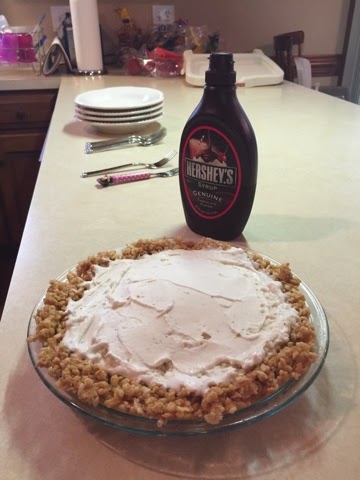 I made one for dessert Sunday.

Yep it is that good and then made another one a few days later for a family with a brand new bebe because when you have a new baby you cannot have enough sugar to survive the late night/early morning walks around the house wondering when the baby is going to go to sleep. 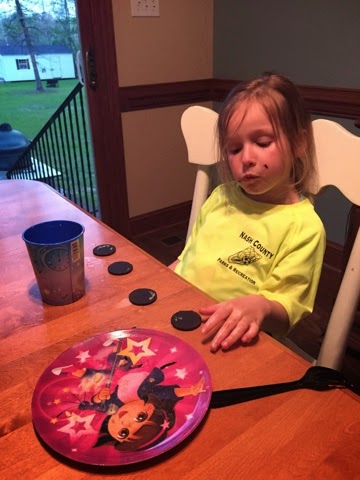 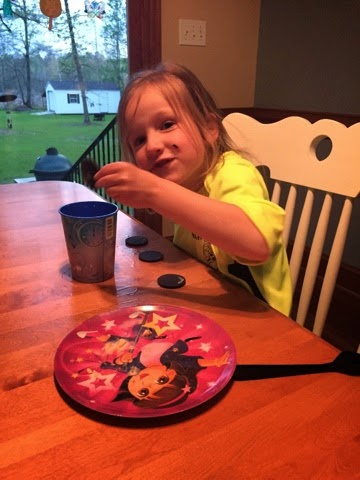 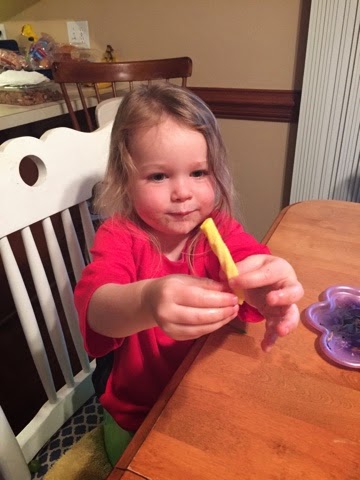 What does R pick? 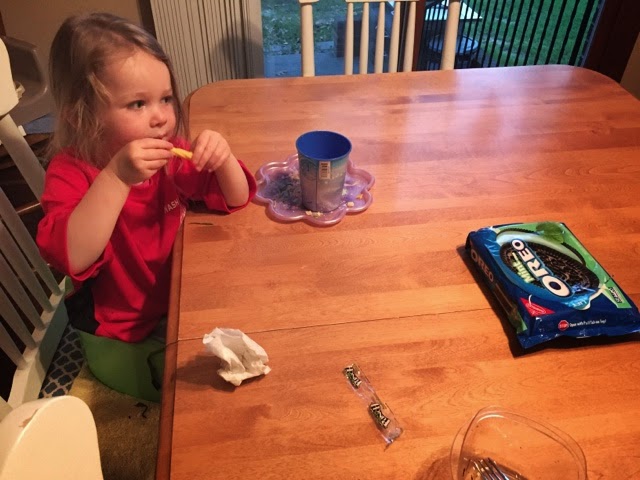 A sour straw over Oreos especially the Mint kind????

Are you my child?

Does M need shoes to walk? 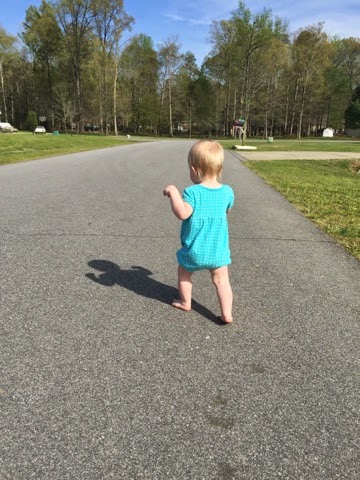 Email ThisBlogThis!Share to TwitterShare to FacebookShare to Pinterest
Labels: friends, outside with the kiddos, quick takes, soccer