--- 1 ---
The girls has a pretty stellar Christmas break thanks to Christmas, extended sleepovers at both Grammy's and Jibbe's (courtesy of M's nasty, nasty cold virus that appeared 6 days before Christmas and stuck around until the 24th), and going to the Nutcracker: 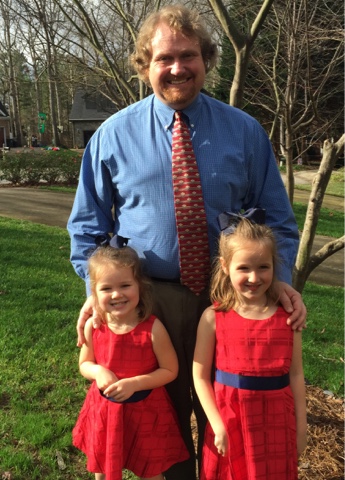 That picture is most definitely from Dec 27 thanks to some wacky NC warm spell. Grammy, Lee and the two big girls went to the Nutcracker this year. I got to go last year but A has been a cling-on baby so no ballet for me. The Nutcracker is becoming a staple around here which is funny because Lee and I used to go when we were dating and first married but we stopped when E was born. Anyhow, R was super reluctant about it at first and E will likely start discussing the ins and outs of this year's trip in several weeks.

---2---
Another staple around here is becoming the New Year's Day Brunswick stew making. Brunswick stew - or just Stew - is a Southern staple that I had no idea about (much like the corn pudding at Thanksgiving) until Lee and I got hitched. 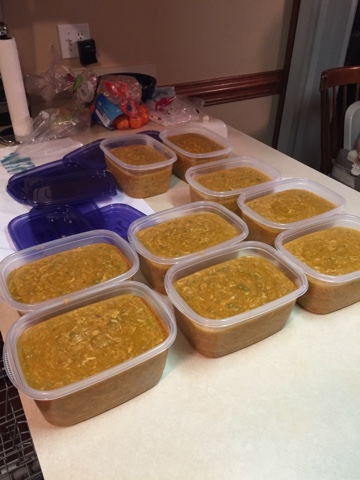 Jibbe has a fantastic recipe for it and making it has been a joint venture (mostly her - I just stir and add input) for the past several years. This year Lee was forced to play his hand in the stew making because A is being a cling-on child and wants to be asleep or held or nursing (more on that later). Anyhow, this year was a success and if you know where to get 2 large wooden spoon/paddles let me know, I'm in the market.

---3---
In other weekly news, it snowed/flurried for more than a few minutes this week... 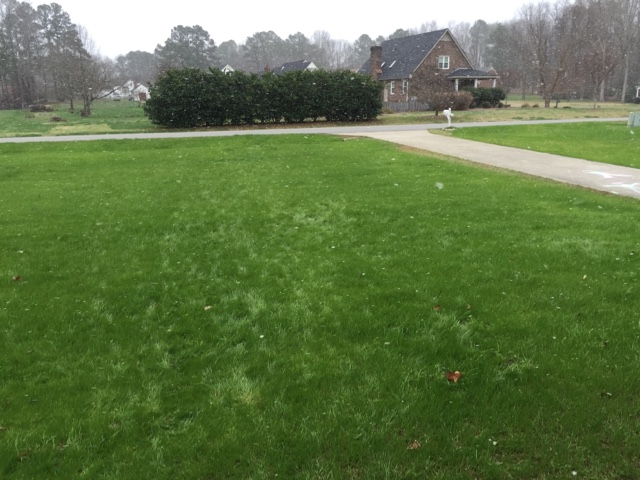 Grandpa Joe's theory that if it thunders during winter, it will snow within 10 days was proven correct-a-mundo as he might say. 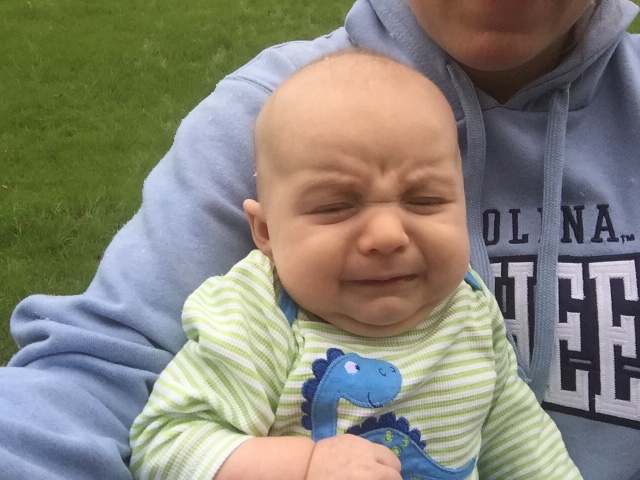 A wasn't terribly happy about it 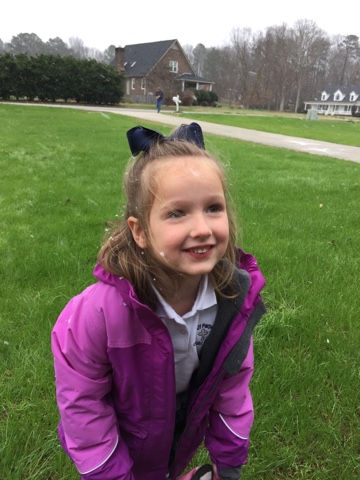 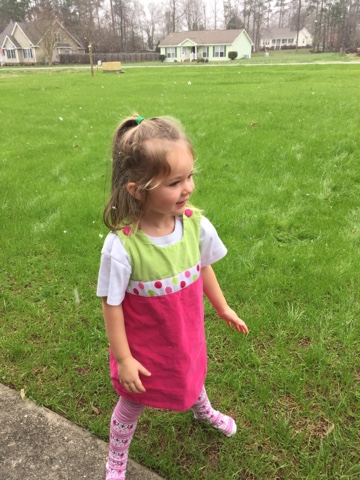 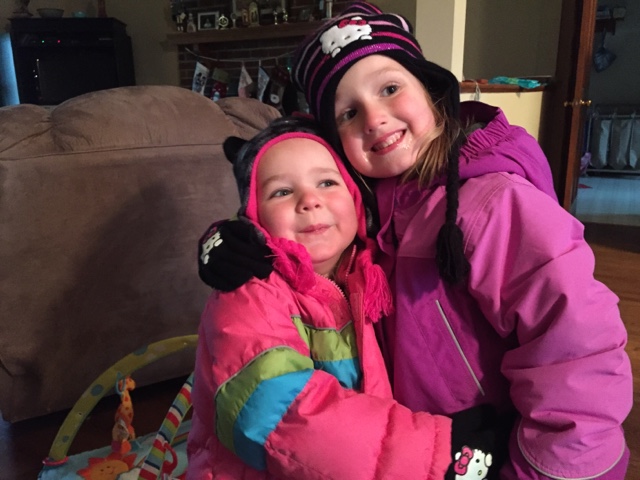 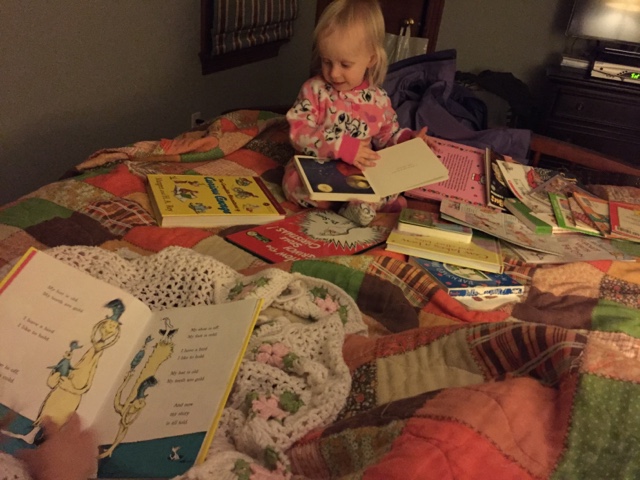 St. Nicholas brought me 'Cloudy with a Chance of Meatballs' and I still haven't read it yet because there are 55 million other books that the girls want to read 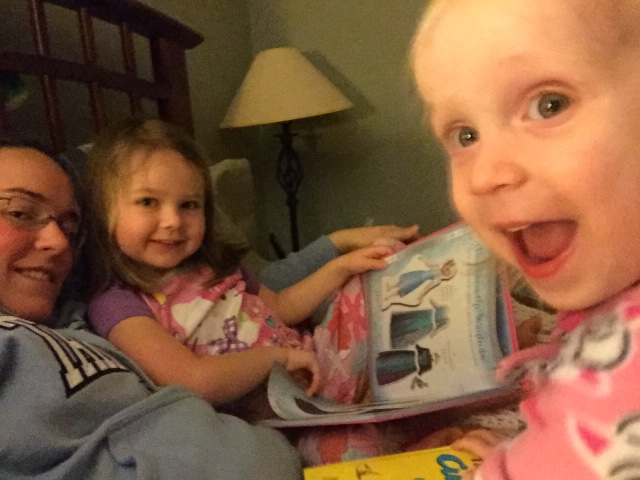 Reading with 3 kids is tough - let alone 3 kids plus a baby. Someone is always not where they want to be on the couch and cannot see the book and blah blah, blah blah. On this night E was at AHG (American Heritage Girls), and A was asleep so R and M and I snuggled up on the bed to read. If I did not have to physically put M in bed and they didn't fight - I think I could read to them until I fell asleep.

---5---
So, how was everyone's first week back at school? Because this pretty much sums up ours: 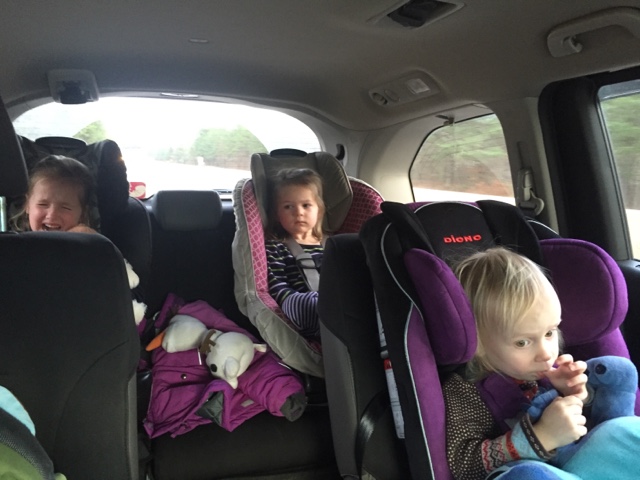 It has been pretty exhausting with a side of kicking and screaming for us. It didn't help that we had Theophany liturgy at 6:30 one night which included a stop at the school uniform store. Total side note, I got E 3 skirts for the year and one of them was not holding up at all so I called the store and they said to bring it in (totally inconvenient because its an hour away) and it turns out they 'determined' (in all of 34 seconds) that it was a manufacture defect in the fabric sooooo they gave us a new skirt (cool).

Anyway, getting back to the groove has been interesting to say the least. I think I'm going to shrivel up like a raisin when Lee has to leave for work early. Seriously, I need to find and starting praying for help from the Patron Saint of Mad Dashes Out of the House.

Anyhow, I'll just blast I WILL SURVIVE every morning as my theme song and we shall power through as usual. 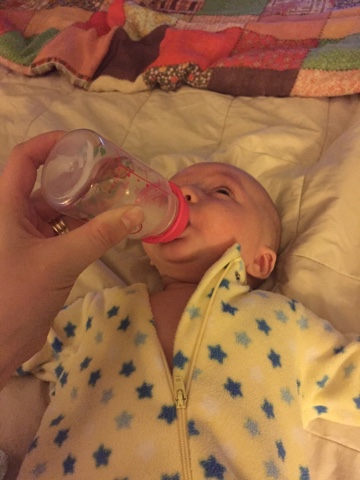 The bottle. A kinda drove me insane on Christmas because I could not put him down. It was either him screaming or me holding him. So I got it in my mind that I stopped feeling sorry for him on December 26 and it was time to get on the Bottle Train.

No small task, I know.

And I know everyone says you (the nursing mother) cannot give your baby a bottle (the babies can smell you and all this stuff) but I have the past two times with R and M plus Lee isn't exactly the best when it comes to screaming, helpless babies. Case in point, when he opts to make dinner, clean up, and bathe the kids over the 45 minutes it took to get A to drink ONE SINGLE OUNCE from a bottle - I'd take giving the bottle over all that work any day of the week.

Well A and I battled over the bottle with a noodle-eating-poodle (see Fox in Socks) for a while. One ounce a day. He screamed and cried real tears and I did get sad for him at times but the kid must use a bottle and he finally turned a corner this week. Tuesday I think, he didn't put up a fight at all. Yesterday he tried to but he remembered our truce and took the bottle eventually.

Nursing him is way easier though. He takes FOREVER with the bottle and I cannot do anything else when I give him the bottle (he likes to be flat on his back on the bed).

This might accurately describe how I'm feeling this week. 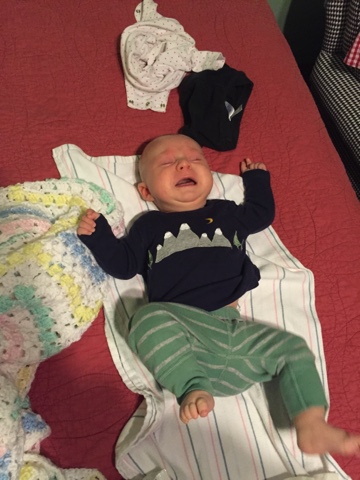 Getting back to work and school is kicking my tail. Case in point, today (Friday) I'm at work getting this project that's a few weeks in the making and A has a blow out of a diaper. My heart kind of sinks because I realize the outfit he is wearing was actually the outfit I should have put as the spare in his bag which means... he doesn't have a change of clothes. I wrap him up in a blanket, pass him off to the baby whisperer, and trudge out to the van (all the way across the freakin parking lot because PLEASE let's not talk about the parking situation at the office : ) in the hopes of finding an outfit from another day or even a spare set of M's clothes. No luck.

I return with my head held low because we have another 95 minutes at the office and A has one gross outfit that all I can do is wipe off the mess and roll with it.

Enter Nani (she's a pro at just about everything) has a change of baby clothes in her car. Imagine that.  A may have given me a weird look as I slipped the very light red (pink, ehem) polka dot onesie on but beggars can't be choosers now.