The Truth About Bringing Kids to Work

I have had the unique privilege of being able to bring my babies to work with me ever since E was teeny tiny. I have not only one boss, but two (though one of whom is my mother-in-law so one might expect this), who have me bring babies to work. It is such a privilege and a blessing to have employers who are willing to be that flexible. Aside from the fact it saves us a gob of $$$ in childcare costs, for me, I still feel VERY connected to my little ones while at the same time feeling 'connected' to the world outside of our little family bubble.

I have said it before and I'll say it again. I like my job but I love my kids. If it came down to it I'd chose to stay home with my kids rather than work a 8-5 job. And it did come down to that about 5 years ago.

After E was born it was understood that I'd take her to work and everything was great. We were gone from 8-5. I packed my lunch. She had a pack-and-play at both jobs and a bouncy seat and a host of other baby gear to keep her entertained - now A is lucky I brought him a bouncy seat : ). She slept in the bathroom for her rest time (lights off, fan on). She screamed and probably drove my co-workers insane. I think Nani can attest to that. So for their patience, I am ever so grateful. E nursed. E played. E made us laugh. E got fried rice dropped on her head when I was eating lunch and she was sleeping in the Beco carrier (people laugh when I drape a burp cloth over my babies heads when I eat now, but I have learned). E had one of the most epic gerry-rigged diapers ever that involved a burp cloth and two large paper clamps.

Those were the good days. I think back on those day and I wonder how in the world I did it.

Then E started dropping her morning naps and entertaining her in the office got much more tricky. I knew it wasn't fair for her to be there any more because I couldn't give her the attention and stimulation she deserved. I knew something had to give. Stay home with her? Put her in full-time daycare? I went to one daycare and toured it twice. I cried a lot. Lee told me he'd stand by whatever decision I made. I didn't think I could make a bigger decision (but then I had to decide what to about kindergarten 4.5 years later and I think I cried a whole lot more over that decision than probably anything else to date). I scoured the inter webs for a solution. How could I work and still be with my baby? Being a stay-at-home mom was not what I envisioned for my life but maybe? No, no. I might go crazy. I liked my jobs.

I stumbled across a halfday daycare/mother's morning out/preschool option. There were several but only one that ran year-round. On an hourly basis it was expensive compared to full day programs but I didn't care. This was it. This had to be it. Now, I just had to sell it to my boss(es). I remember that conversation well. I remember being so terrified. What if he says no? Then what will happen? Well, this halfday option was a perfect compromise.

E and I would go in early. I'd leave to take her to school (should we discuss how much of a wreck I was on that first day?, probably not). Then I'd work until pick up time. Then we'd come back to the office for lunch and then she's rest in the bathroom and then we'd leave at 5. Once she started taking shorter naps we worked it out so that I would work from home in the afternoons and I've been doing that ever since (thanks to gotomyPC).

Also around the time E was 9 months old - or maybe she was alittle older my mother-in-law (Jibbe if you have't picked up on that) started picking E up one afternoon a week. Jibbe is devoted to working and making sure things run smoothly at the pool store so it was a big deal for her not to be in the office one afternoon a week. BUT she's got a soft spot for grandkids (as I imagine most grandparents do) and so E and Jibbe would go to lunch and have the biggest time one afternoon a week. This one-a-week Jibbe treat still continues. There is so much discussion over what day it is, and is Jibbe picking us up today and where are we going to lunch etc etc etc. It is kind of a big deal for the kids. And it is awesome for everyone because Jibbe always has a home cooked meal cooked up when 5:30 or 6 rolls around.

But anyways back to my story.

Here is the truth about bringing your kids to work. 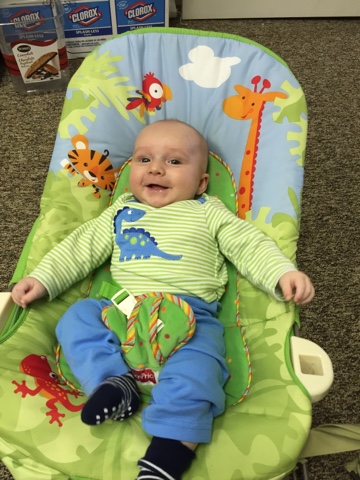 I get to hang out with a baby all morning. A and I have been going into the office since he was about 2 weeks old. Yes ,he is super small. No ,I am not crazy. Right now, A is into smiling and 'talking' and he thinks it is hilarious when I change his diaper. I get to feed him when he's hungry - which means no pumping. All you mamas out there who pump at work and in the car on the way to work - more power to you because pumping is not my thing. I get my work done and he is generally a happy camper.

Some days though, aren't fantastic. Some days, A doesn't want to take a nap or sometimes the nap is only 45 minutes and I need it to be 2 hours. Some days I worry that he cries too loud - and I really try and keep his noise to a minimum. Some days I want to just do this: 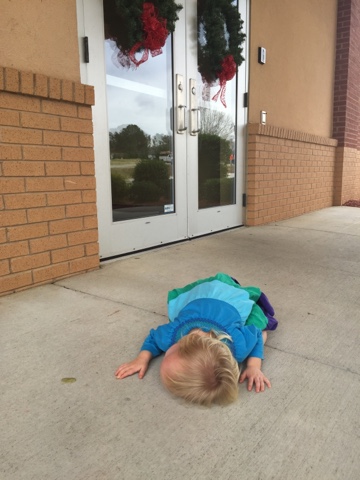 But instead my toddler beats me to throwing a tantrum. So I pick myself and her up off the ground and move full steam ahead because the clock is ticking for us to get home, eat lunch and for me to get back on the clock.

Some days I don't know why I bother. Those days when the kids are acting crazy. Everyone has a problem that I cannot solve. A has a massively gross diaper that requires a full change of clothes and I forgot to pack an extra outfit. 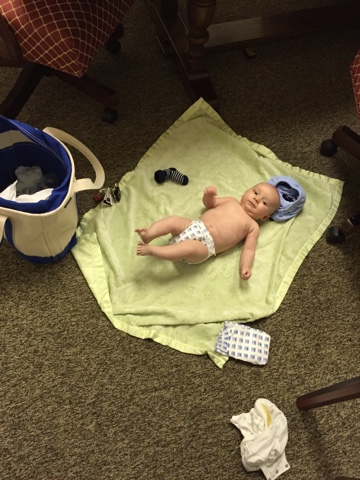 Those days are tough. And God surely steers me though those moments and those days because I'm quite sure it would be much easier to just throw in the towel and stay at home full time or put everyone is full time daycare. 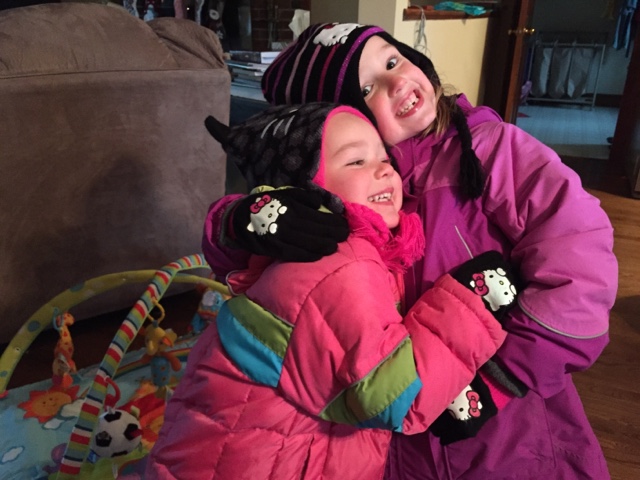 Make it all worth it. Being able to be home in the afternoon and taking a 10 minutes IT'S SNOWING break to be present with the kids and seeing their excitement and sharing in it. And so many others.