In Which I Assign a Monetary Value to My Sanity

We have Amazon Prime. I don't love paying the $100 a year for it but the rate at which my better half purchases books... The free shipping makes it worth it.

I'm more of the well I don't neeeeeeeed it in 2 days so just choose the slowest option and get the free e-book credit or this month its 5.99 toward Amazon Pantry - which I haven't tried but Subscribe & Save is pretty neat - except when I got a 12 pack of Mint Chocolate Protein bars that taste TERRIBLE.

Anyhow, I'm pretty much anti-paying-for-shipping. Case in point, earlier this summer when E got her racing bathing suit shipping was going to be $7.00 but if you spent $50 you got free shipping. So I stocked up on swim diapers for A (this season and next) and hit 50 and change in my cart and called it a success.

Two nights ago, A was up about 100 million times. Screaming. Not really hungry. Just looking for his paci. Which was usually on the floor behind the crib or under the bed but only locatable by turning on the big room light (thank you dark green carpet and lightish green paci). Then once I did find it, I'd give it to A, he'd settle down and then 2.5 seconds later he'd be sitting up and the paci would be on the floor... again.

And maybe the 2.5 seconds is a hyperbole but it just seemed like it because when you are lying WIDE awake at 2:30 in the AM and have been for the past hour and cannot go back to sleep and when you do get back to sleep A pipes up again, well, time is warped.

Just for the record the same thing happened this past (last) night... There were lots of prayers going up very early this morning because well, what better do to when you can't sleep.

Yesterday, I broke down and bought something that is super expensive for what it is... A stuffed animal and a paci. Should these two items cost $14? Heck no! But a combo sells for that soooooo... I'm rolling with it and hoping this helps solve part of A's paci problem. (We've NEVER has a Paci user since the girls are/were thumb suckers so this is an insanely expensive pacifying device). On top of paying way too much for this pacifier, Amazon gave me the option of next day shipping for a mere $3.99. The miser in me said heck no! Then the gears in my heads started turning.

But I still don't want to pay for it.

It's only 4 bucks and I don't want to feel like I need round 25 of coffee at 2 in the afternoon. 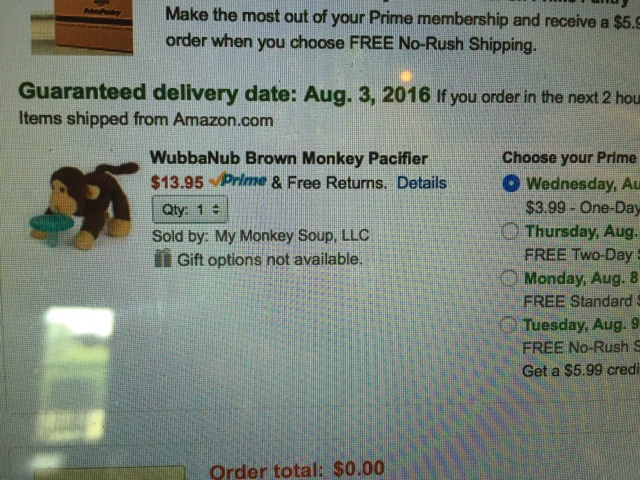 So what do you know, I bit the bullet. Swallowed my miserly pride and chose the next day shipping.

I'll keep you posted on A's throwing abilities with this and my 1 am locator abilities of this thing...
at August 03, 2016