On Voting and Discussions Regarding Choices

Today I voted. Like millions of other people. I didn't have a line and I didn't drag the kids along.  Usually I like to take them so they get in the habit of going to vote but I was just so not excited to vote. I voted because I believe it is my civil duty/obligation - at the risk of making it sound like Mass attendance. I didn't vote because I wanted to.

I can happily say I didn't cast a vote for the next president because I chose the write in option.

Now try explaining that to a 6 yr old.

E's school had an election today, two in fact. One for president and one for ice cream flavor choice. Clinton or Trump. Chocolate or Vanilla. In the days leading up to their elections we talked about candidates and issues and choices. Thanks to this election process we talked about abortion and how babies are not given a chance at life and we talked about deportation and how that leaves kids without their mamas and/or papas. Both are scary and both aren't fair.

So what are you to do when you are stuck between chocolate and vanilla? There's a million other choices why not pick the one you really want, I asked. If your favorite is cookies and cream or mint chocolate chip you have a choice to pick that. You are nearly guaranteed not to win but you go down with your top choice. I'm quite sure I didn't convince her writing in was a legit choice... but give her four years and she might be campaigning third party. 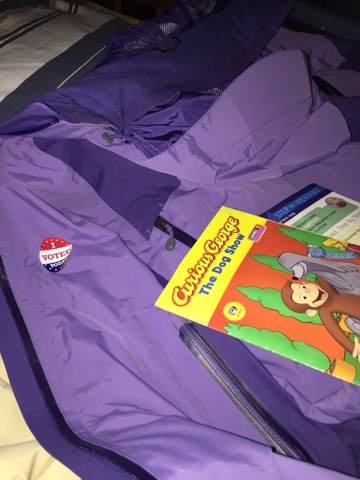